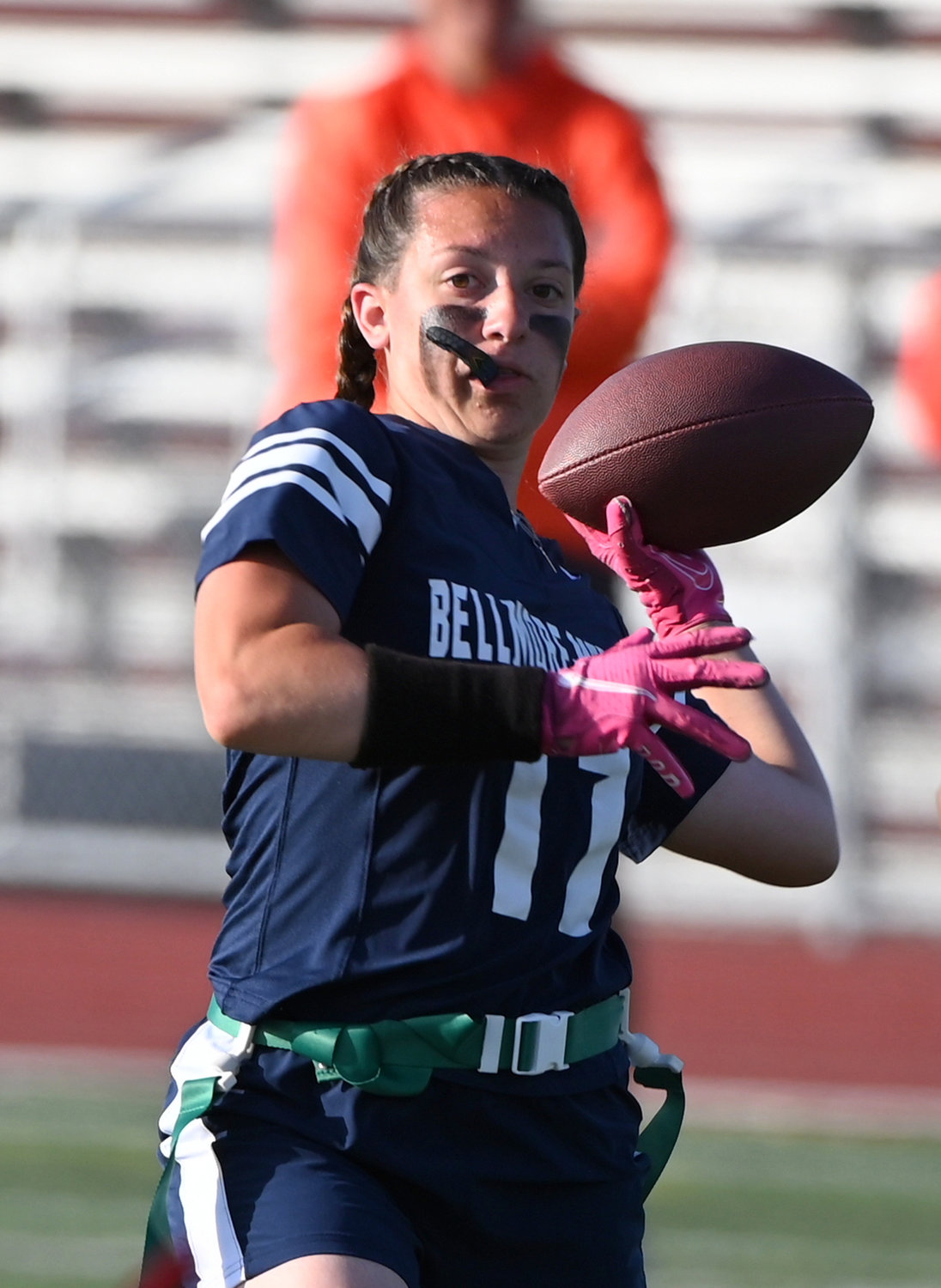 No doubt Suffolk County champion Whitman saw film of Bellmore-Merrick's fourth-quarter comeback May 26 in the Nassau girls’ flag football championship – in which Chargers quarterback Sofia LaSpina found Gabrielle Hanellin for a four-yard score with 4:21 left to go ahead against Lynbrook and ice the county title.

One can only imagine dread setting in as the Wildcats uncannily found themselves in a reenactment June 4 in the Long Island championship in Florham, New Jersey – where once again it was LaSpina to Hanellin, four yards for the winner, as Bellmore-Merrick went ahead with 7:05 to play before adding insurance to win the inaugural title game 30-20 at Atlantic Health Jets Training Center, headquarters of the NFL’s New York Jets, who along with Nike sponsor the second-year flag football league that expanded this spring to add 17 teams from Long Island.

Its roster drawn from three area schools – Mepham, Calhoun and Kennedy – Bellmore-Merrick went 10-0-1, including playoffs, led by renowned Mepham varsity football slot receiver LaSpina, who in her first season under center passed for 2,913 yards with 46 touchdowns and 13 interceptions. The junior, who last fall earned national fame as the first female in Long Island high school history to score a touchdown, lent the Chargers a singular edge in the fledgling girls’ gridiron league.

“Obviously, playing receiver on the fall team, Sofia had a good understanding of how an offense works,” said Chargers head coach Anthony Cracco, who also is LaSpina’s skipper as Mepham football head coach. “I wouldn’t say we anointed her, a lot of good athletes came out, but she was certainly the logical choice to be quarterback. Right from the start she was our de facto leader. The girls looked at her as someone who could help them win.”

Along with wideout Hanellin, who led the Chargers with 13 touchdowns, all through the air, Bellmore-Merrick's league-best offense was powered by flanker/halfback Luciana Setteducate – team leader in receiving yards with 760, as well as rushing (498) – who had 11 touchdowns, and receiver Adrianna Iemma (415 yards, 11 TD). The senior trio supplied two thirds of the Chargers’ scoring on the season – though perhaps Hanellin’s pair of winning grabs will be best remembered.

“Gabrielle is a fierce competitor who wants to win,” said Cracco. “We have a team saying that big players make big plays in big games. And that’s what she did. Twice.” He added, “Really, though, she did it all year.”

“We were fortunate to be battle-tested coming into the championship game,” said Cracco. “These girls had learned how to not get discouraged. We knew we were capable of scoring, and were confident we could do what we’d done all year.”

Added Cracco: “This team deserves all the accolades they receive. They set out from the start to be Long Island champions. They worked hard to make it happen.”