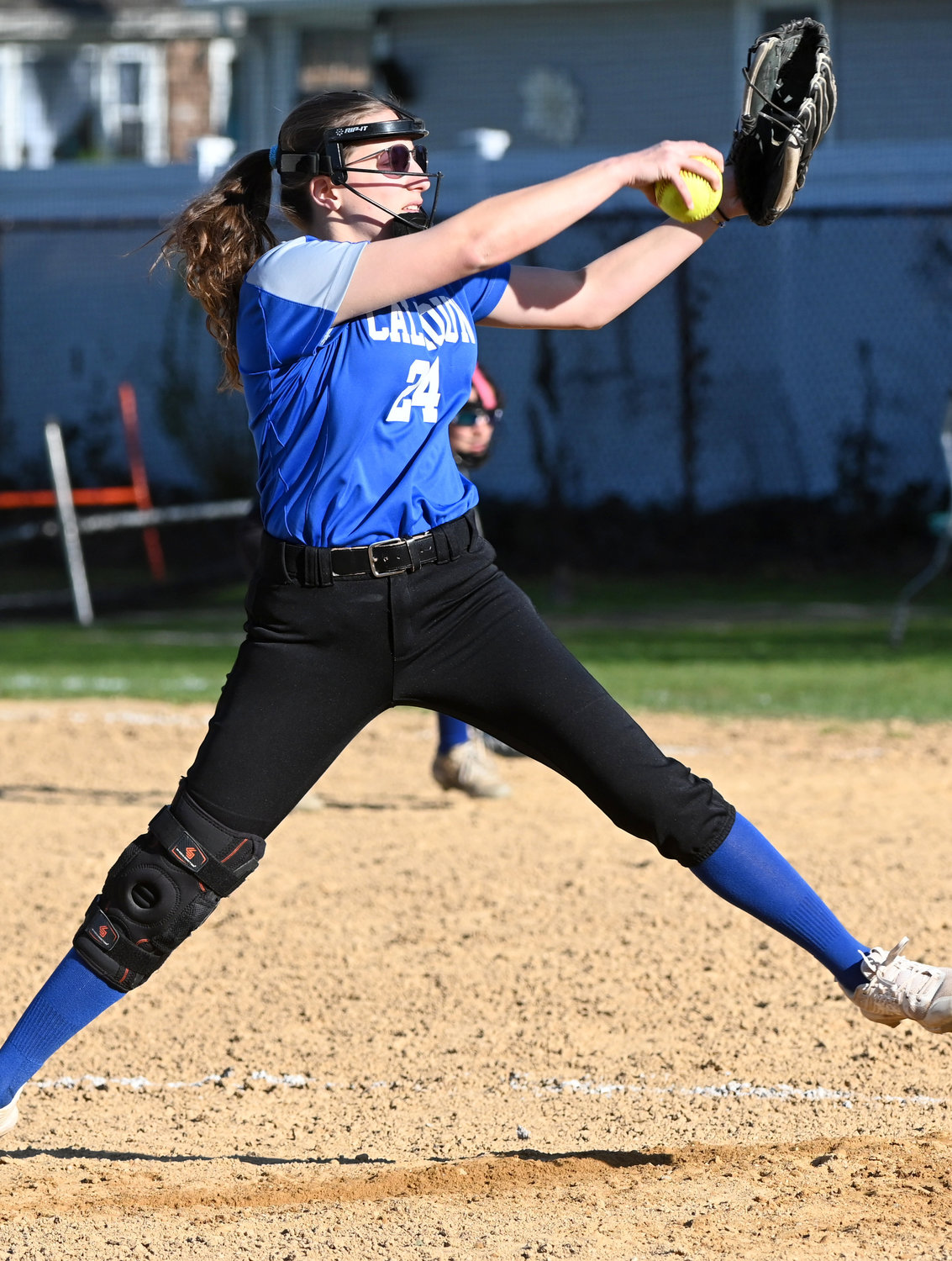 Senior Lauren DeMarco has been a fixture in the circle for the Colts and has 76 strikeouts in 52 innings with a 2.03 ERA.
Donovan Berthoud/Herald
By Garrett D. Uribe

Calhoun softball coach Michael Pisano can pinpoint the instant his young Colts squad grew up.
An April 8 game at league-rival Plainedge had slipped away when late defensive lapses cost the Colts the thin lead that senior ace Lauren DeMarco had nursed – resulting in 3-2 walk-off loss to the Nassau Conference 2-leading Red Devils.
And a much-needed moment of reflection for Calhoun.
“The loss against Plainedge made us refocus on who we are as a team,” said Pisano, whose club boasts seven starting sophomores. “We talked about what we needed to do, to be better in the field, be more precise in all aspects of the game, to practice better. We talked about how we could win.”
Dispensing with talk, Calhoun – ever since – has been walking the walk, going 5-1 from April 12 to sit a half-game out of second place at 6-4 in Conference 2 (7-6 overall) behind league leaders Plainedge (7-2) and Hicksville (6-3).


“Without that speed bump, I don’t think we’d have found the success we’ve recently had,” Pisano said.
Coming off an All-Conference junior campaign that saw her toss two no-hitters, including a perfect game against league foe Kennedy, DeMarco – a Wilkes University (PA) commit – hardly broke stride returning to the circle this season. In 52 innings the righthander has 76 strikeouts and an earned run average of 2.03, continuing a fruitful partnership with favored pitch-caller Gabriella Razza, an All-Conference senior catcher.
“Gabby and Lauren work together throughout the game as they are on the same wavelength,” Pisano said. “This chemistry has ultimately led to our success as a team.”
Apart from contributions by its all-senior battery, Calhoun can chalk up this season’s successes to a troupe of tenth-graders who’ve gamely undergone an accelerated maturation. Leading the Colts with a .467 batting average and .581 on-base percentage, shortstop Gia Pisicchio also has flashed a fair bit of leather, while center fielder Gianna Lucchi (.417 BA, .500 OBP) has been a revelation up from junior varsity.
“In eight years coaching here, I’ve never seen a glove like Gia’s” Pisano said. “Fielding is an art with her. Gianna Lucchi is our biggest surprise, going straight from JV to a standout on varsity.”
Gabriella Facciponti (.391, .442) – an Honorable Mention All-County honoree – leads Calhoun with 13 stolen bases, including a steal of home in a 7-6 win at Seaford April 28, while infielders Isabella Pagano (.360, .484) and Johanna Esposito (.336, .442) have shown not only consistency but timeliness at the plate, along with All-Conference designated hitter Rebecca Collins – the Colts’ No. 2 righty (2 saves) – who has twice delivered the go-ahead hit in comeback wins.
“Sometimes a team develops in ways you don’t expect,” said Pisano, whose team faces league-leaders Plainedge and Hicksville once apiece in its final four games. “This year we hit adversity and became more resilient. It forces you to get stronger. This is a team that believes in its ability to succeed.”
Added Pisano: “I can tell you, we’re really looking forward to playing Plainedge again, this time at home.”