Jewish pride at the heart of center’s lesson 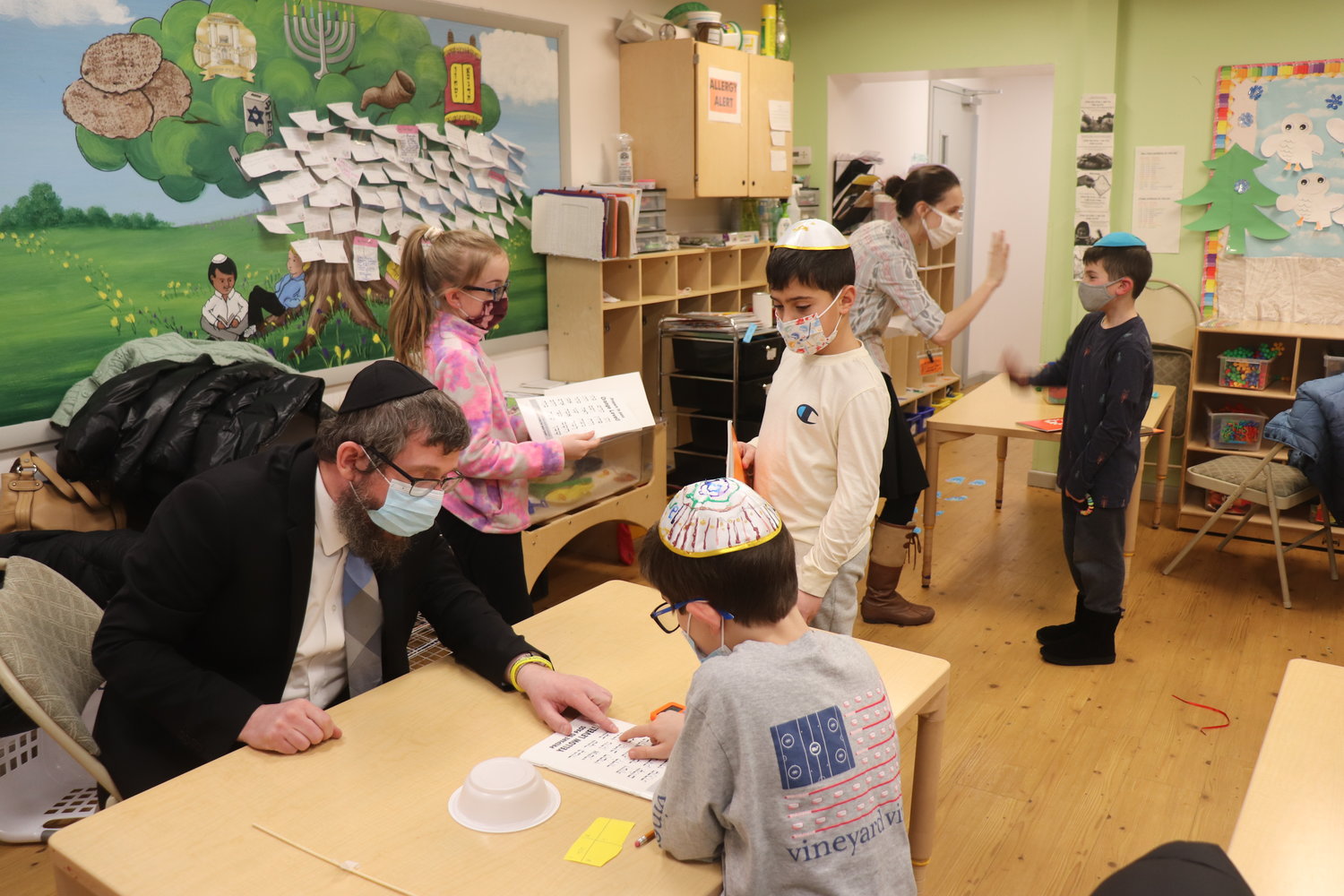 I’ve had some experiences with anti-Semitism, mostly in elementary school, but it was apparent in middle school.”
Landon Borets Liberov, Hebrew student
By Maria Cestero

In the lead-up to International Holocaust Remembrance Day, Jan. 27, the Chabad Center for Jewish Life in Merrick hosted a special sermon, delivered by Rabbi Anchelle Perl, director of the Chabad of Mineola. International Holocaust Remembrance Day honors the 6 million Jewish victims of the Holocaust and millions of other victims of the Nazi regime on the anniversary of the liberation of Auschwitz-Birkenau.

Perl, 68, was invited by Chabad Center’s Rabbi Shimon Kramer to give a sermon to children deemed mature enough for a conversation about anti-Semitism. The center has “karate-style” levels, meaning that students work their way through Hebrew school at their own pace, according to Kramer. Those at the higher levels attended Perl’s sermon encouraging Jewish heritage and pride.

“There’s a huge amount of ignorance out there,” Perl told the children. “The more you know about being Jewish, the stronger you are, and the less concern, or anxiety, or fear you may have of what someone else talks about.”

In an effort to maintain a kosher diet, Moshe refused to eat the horsetails given to the prisoners of the camps. He survived by eating close-to-kosher potato skins. Although he witnessed hate and horrible events, he dedicated his life to the teachings of Jewish heritage, Perl said.

“He inspired us, even though he had seen with his own eyes such terrible things, to be tolerant and understanding to all Jewish and non-Jewish people, and to spread what life is all about,” his son said.

Inspired by his father and the Lubavitcher Rebbe, Rabbi Menachem Mendel Schneerson, Perl, who was born in England, left his home and moved to Mineola in 1974. As an emissary of Jewish heritage, he started his Chabad work in 1976. Comparing government actions of countering anti-Semitism, Perl said he believed the U.S., and Long Island specifically, has made the best efforts to help people of Jewish heritage.

Kramer, 47, the Merrick Herald’s 2017 Person of the Year, who invited Perl to talk to the older students, said he believes it’s important to teach younger students in Hebrew school to stand up for themselves. Developing the idea of shining a light, students are encouraged to be “lamplighters,” and to be kind and good in the face of anti-Semitism. “Anti-Semitism touches the wrong nerve to me,” Kramer said. “[Jewish children] shouldn’t have to feel guilty about being Jewish.”

During his talk, Rabbi Kramer recounted riding in a van in 1994 with several other Jewish students who were on their way to visit the ailing Schneerson in the hospital. They were traveling through Brooklyn when the Lebanese-born Rashid Baz opened fire on the van, killing two of its passengers and leaving another severely injured. One of the victims was Ari Halberstam, a cousin of Kramer’s wife, Chanie. Baz was sentenced to 141 years in state prison and later confessed to shooting at the van because of its occupants’ Jewish heritage.

Chanie Kramer said that in the past year, several parents at the Chabad Center expressed concerns that their children might face anti-Semitism in public schools. One parent, Chanie said, confided that while her son was at a camp, a group of boys ganged up on him, calling him something along the lines of a “dirty Jew.” The Kramers contacted the camp, and the students apologized to the child for their words.

After Perl’s remarks, he and Kramer opened the room to discussion. The children began sharing stories about anti-Semitic experiences they had had with other students.

“I’ve had some experiences with anti-Semitism, mostly in elementary school, but it was apparent in middle school,” said Hebrew student Landon Borets Liberov, 12. “It can make you feel bad about yourself, but you have to stay strong and keep your head up.”

Landon, who lives in Bellmore, takes classes at the Chabad Center once a week. He said he was proud of being Jewish, and loved attending Hebrew school.

The day after the sermon, State Sen. John Brooks, of Seaford, invited Perl to a lighting ceremony in honor of International Holocaust Remembrance Day. “It’s not easy to get rid of this scourge” of anti-Semitism, Perl said, “but we must do our best and shine the light. I am a lamplighter.”

With over 100 students on the waiting list for its programs, the Chabad Center building is currently under construction. The renovations will expand the Hebrew school and open more classrooms for the students.

Reunion for Lawrence High Class of 1972