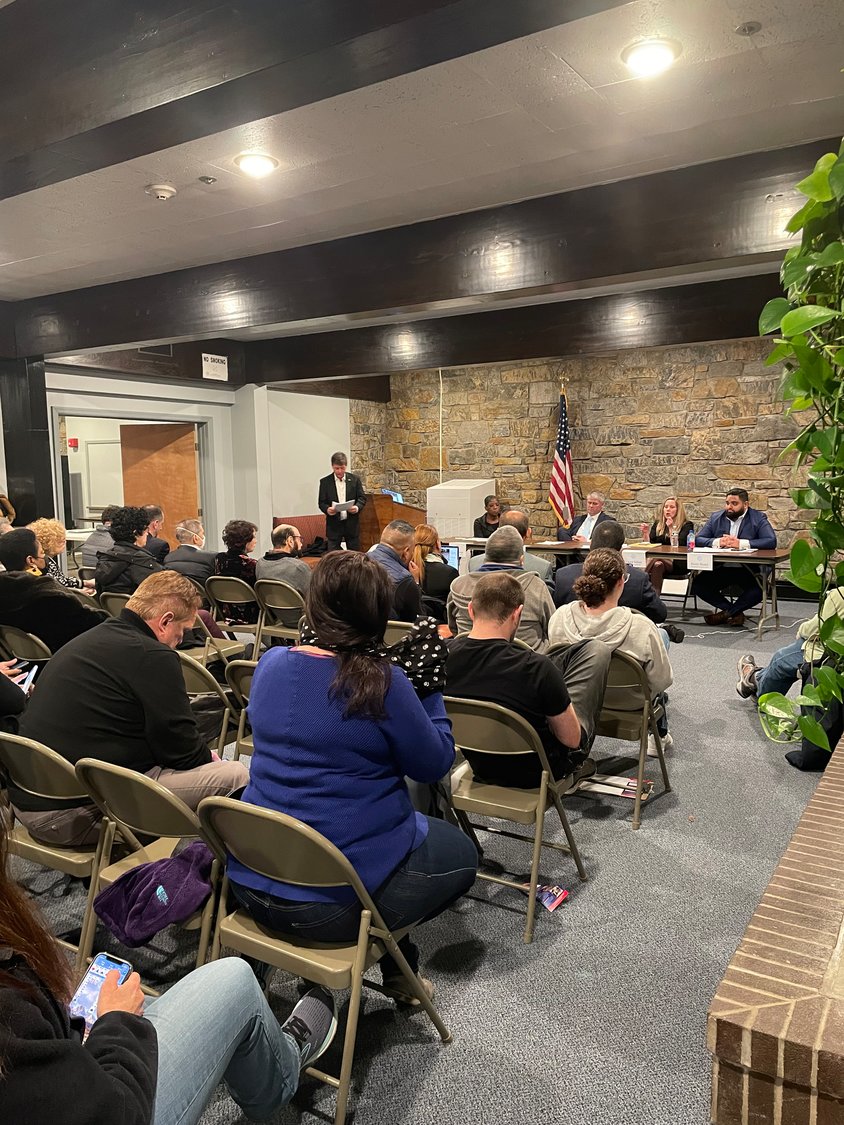 Roughly 150 people heard or saw the candidates, because the meeting was also on Zoom. Primary elections, which will decide who will run from each party, will take place on June 28.
Jordan Vallone/Herald
Previous Next
By Jordan Vallone

Four of the five Democratic candidates vying to replace U.S. Rep. Kathleen Rice attended a Meet the Candidates night hosted by the Bellmore-Merrick Democratic Club at the Merrick Road Golf Course Clubhouse on March 14. Rice announced that she would not seek re-election in the 4th Congressional District last month.

Each candidate made a three-minute opening statement, and was given three minutes to respond to each question. Among the topics discussed were the affordability of living on Long Island, and public safety.

Responding to the same question, Gillen touched on several topics, all relating to lifestyle affordability, whether it be housing, prescription drugs or gasoline. “We need to tackle this problem immediately,” she said of the recent surge in gas prices. “We should have an immediate gas tax holiday — we should also be working to become energy independent.”

Shakil, the CEO of America’s Islamic Radio, based in Mineola, said that safety was his main concern. “We are seeing crimes through the roof, illegal guns — people are getting killed, people are getting shot,” he said. “The only way we can ensure that public safety is taken serious is by funding our police, but ensuring that they have transparency and accountability.”

Bynoe discussed some of the work she has done in the Legislature, such as offering mental health services to county employees that deal with the public. “We have to go to Washington, we have to work across the aisle, and we have to bring common-sense solutions to the issues we are facing here,” she said.

The war in Ukraine was also on the candidates’ minds. All four agreed that the U.S. should continue sanctioning Russia and supporting Ukraine with resources, which isn’t always easy, according to Corbett.

“It’s very tough for any local group to find the proper organization that can actually get the goods that you all bring in there,” Corbett said. “We should be in Washington — at least providing resources to our residents that are willing to help.”

“Aside from doing the sanctions and doing all that we are in the current moment, we have to make sure that we are sending arms,” Bynoe added. “That is a basic tenet of who the United States is — and we have to do it well.”

In his closing remarks, Corbett noted that while all of the candidates agreed, for the most part, on many of the issues and the potential solutions to the challenges that were discussed, ultimately it would be up to voters to decide who the best person is to represent the party.

As of press time, only one Republican, tech CEO Bill Staniford, of Lawrence, had announced his candidacy for Rice’s seat. Primary elections, which will decide who will represent each party in November’s election, will take place June 28.

A full video of the event is available on the Bellmore Merrick Democratic Club’s YouTube channel.