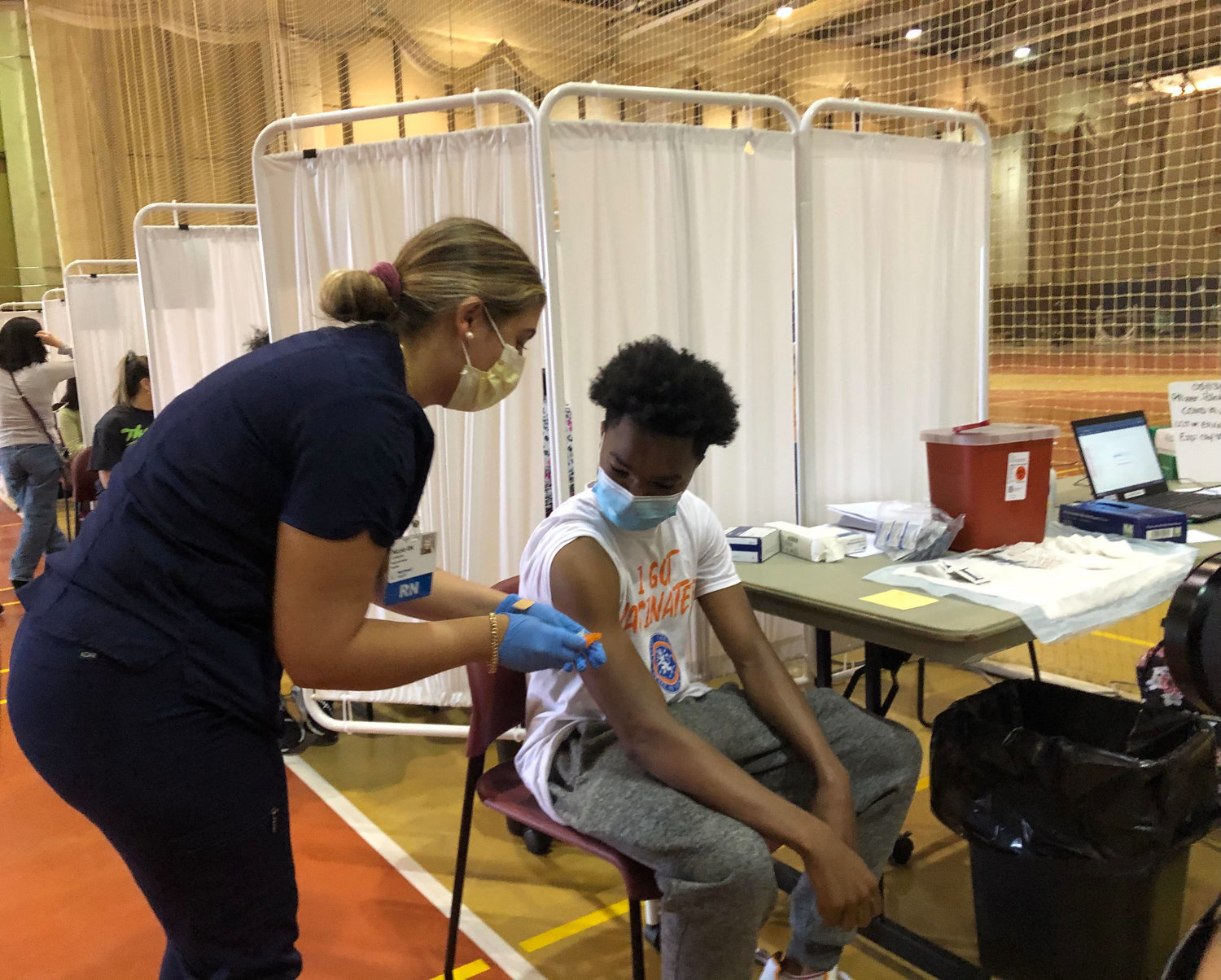 Myles Hollingsworth, 16, of Freeport, was vaccinated in May at a Nassau Community College vaccination site for adolescents. Eligibility for the Covid-19 vaccine has expanded to children ages 5 to 11.
Herald file photo
Previous Next
By Jordan Vallone

On Nov. 3, the Centers for Disease Control and Prevention authorized the Pfizer BioNTech Covid-19 vaccine for children ages 5 to 11. The pediatric vaccine — one-third of the adult dose — quickly became available to local doctors’ offices and pharmacies, leaving parents to decide whether to have their children vaccinated, or not.

For some parents, the vaccine is a step toward pre-pandemic normalcy. “I am absolutely for the vaccine,” Carrie Kalish, of Bellmore, who has a 14-year-old son at John F. Kennedy High School and a 10-year-old daughter at Shore Road Elementary, told the Herald.

“I inoculated my children not only for their own health, but for the benefit of public health,” Kalish added. “I look forward to a future where they don’t have to wear a mask in school.”

Kalish’s son was inoculated at Belmont Park when the vaccine became available to his age group. Her daughter received the pediatric dose at Prohealth Bellmore Pediatrics.

“I’m not a doctor, but I know enough to know what I don’t know,” she said. “I am trusting of my kids’ doctor and the general scientific community — I listen to them.”

Other members of the community aren’t so sure about the vaccine. Some parents feel as if there isn’t enough information, and others are opposed to the idea of a mandate.

Sara Lobato, of Merrick, a nurse for 10 years at Northwell, now with her own practice in Merrick, has two children in the Merrick Union Free School District. “What our children desperately need right now is a respite from toxin exposure, not an exacerbation,” Lobato wrote in a statement. “A clean diet, free of GMO foods, adequate sunlight and fresh air, would do more for their immune system than an experimental injection with very short-term clinical trials and unknown long-term effects — for which the manufacturers have zero liability for.

“The efficacy for all three vaccines has been on the decline,” she added, “and adverse reactions are on a steep incline, even with VAERS being underreported.”

“This is not a childhood illness, and should not be treated like one,” Lobato said. “It is nonsensical and callous to promote, yet alone mandate, this for children.”

Jannine Sedita, of North Bellmore, told the Herald that while she was not anti-vaccine, she opposed mandating it. Sedita has three children, a 19-year-old daughter in college, and two sons, ages 17 and 15, at Wellington C. Mepham High School. Her daughter is vaccinated, but her sons are not.

“I think any mandates for this shot is ridiculous,” Sedita wrote in an email. “You can still get the virus [and] spread the virus. When you use the word vaccine, with me, I expect that you would be immune to said disease. My children have received their MMR and other required vaccines, and they would not get those diseases.”

She added that two of her children have had Covid, and had flu-like symptoms, but were ultimately fine. She also said she understands the fear of younger people spreading it to older or less healthy people.

“Those compromised or elderly adults should be vaccinated, along with any other shot that is recommended over a certain age,” Sedita said. “Bottom line is — leave the decision to the parent and not the government or school board. It should be our right to protect and advocate for our children that can’t fight for themselves.”

Amy Waldman is a nurse practitioner and owner of Total Care Adult Health in Merrick. “I think the vaccine is good — I think widespread vaccination is one of the key tools that we actually have to end the Covid-19 pandemic,” she said. “Whether or not it’s adults or anyone that’s eligible — they should get the vaccine.

“My insight with the kids is, even though in the age group of 5 to 11 their risk of getting serious illness is a lot less, there is still a risk of death and hospitalization,” Waldman added. “If they don’t get vaccinated, they also have the possibility — the likelihood — of transmitting the virus to other family members who may be too young [to be inoculated].”

According to the U.S. Food and Drug Administration, the Pfizer vaccine was found to be 90.7 percent effective in preventing the virus in children.

“I have a 10-year-old that I’m getting vaccinated,” Waldman said. “And you know, the pediatric population is actually getting a lower dose than they would give an adult. They try to optimize safety, tolerability and efficacy.”

While a 30-microgram Pfizer shot is administered to those 12 and older, a 10-microgram shot is given to younger children. According to the FDA, in clinical trials, side effects were mild and similar to those seen in adults. The most common one was a sore arm.

The distribution of pediatric vaccines is expected to increase. In Bellmore-Merrick, they are available at CVS pharmacies, including the Bellmore and North Bellmore locations. Parents are advised to check with their local pediatricians for vaccine availability. Inoculations are available through the Town of Hempstead’s Vaxmobile, operated by Mount Sinai South Nassau hospital. Those seeking appointments can call (516) 377-5333, or apply online.