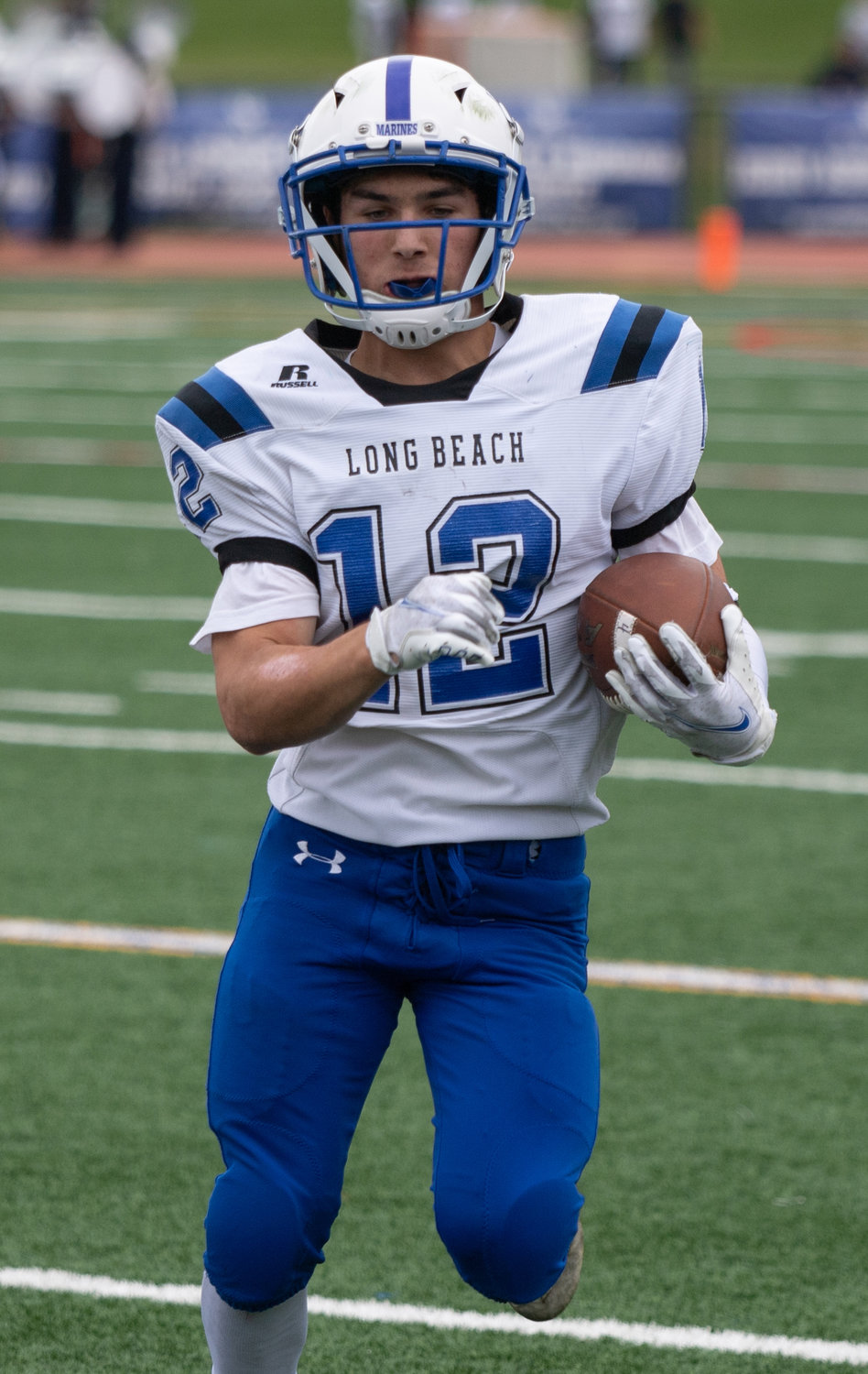 Less than 24 hours before it was supposed to play its fifth Nassau Conference II football game, Long Beach received word from Roslyn it would need to forfeit last Saturday’s matchup due to Covid issues.

“We heard the news in the middle of Friday’s practice, but the kids wanted to keep going and finish the session,” Long Beach head coach Scott Martin said. “I told them we probably won’t have a game because Sunday and Monday weren’t possible for Roslyn either. I told them to rest over the weekend and be ready to get back to work.”

However, soon the Marines learned a similar situation sprung in Suffolk County that would create a playing partner. Huntington’s homecoming game against West Babylon was also cancelled, and the Blue Devils were also searching for a replacement opponent.

“We matched up perfectly,” Martin said. “The next thing we knew, we were on a bus Saturday morning and headed to Huntington.”

Though the outcome wasn’t what Long Beach wanted, Martin said “it was great to play and not lose a game off the schedule.” Huntington won, 28-7, behind a strong ground attack and three takeaways. “We had zero preparation and I assume the same went for Huntington,” Martin said. “It was difficult, but I thought the kids played well. If not for our first three turnovers all season, we would’ve had a chance.”

The Marines’ lone score came in the second quarter on junior Jeff Conway’s 9-yard touchdown run. Conway and junior Hayden Sofield are sharing the workload at quarterback, with the latter getting about 60 percent of snaps through five games.

Conway has also been a catalyst on defense and racked up 13 tackles in the loss. Senior Christian Tarzia added an interception.

“Defense is our strength,” said Martin, who noted junior Jack Skarren leads the unit in tackles and is part of a talented linebacker corps along with Conway, senior Owen Stark and junior Jack Miller. “We’re one of the best in points allowed in the conference,” he added. “We’re leaning on the defense to keep the score low and give us a chance to win. It’s not optimal, but it’s the way we’re built.”

Martin is hopeful the offense can do more damage down the stretch and help clinch a playoff berth. Long Beach (1-4 overall) hosts Glen Cove, winners of two straight, this Friday for homecoming in a 7 p.m. start. A trip to Valley Stream Central and a visit from Sewanhaka completes the regular season.

The Marines have scored five touchdowns, two of which came in their only victory a 14-7 decision over Herricks in Week 2. Sofield had passing (to Miller) and rushing touchdowns in the win. Long Beach also gave MacArthur (13-0 loss) and Elmont (8-7 loss) all they could handle in narrow defeats.

“We have a legitimate shot to run the table and finish 4-3 in the conference and maybe get the 6-seed,” Martin said.