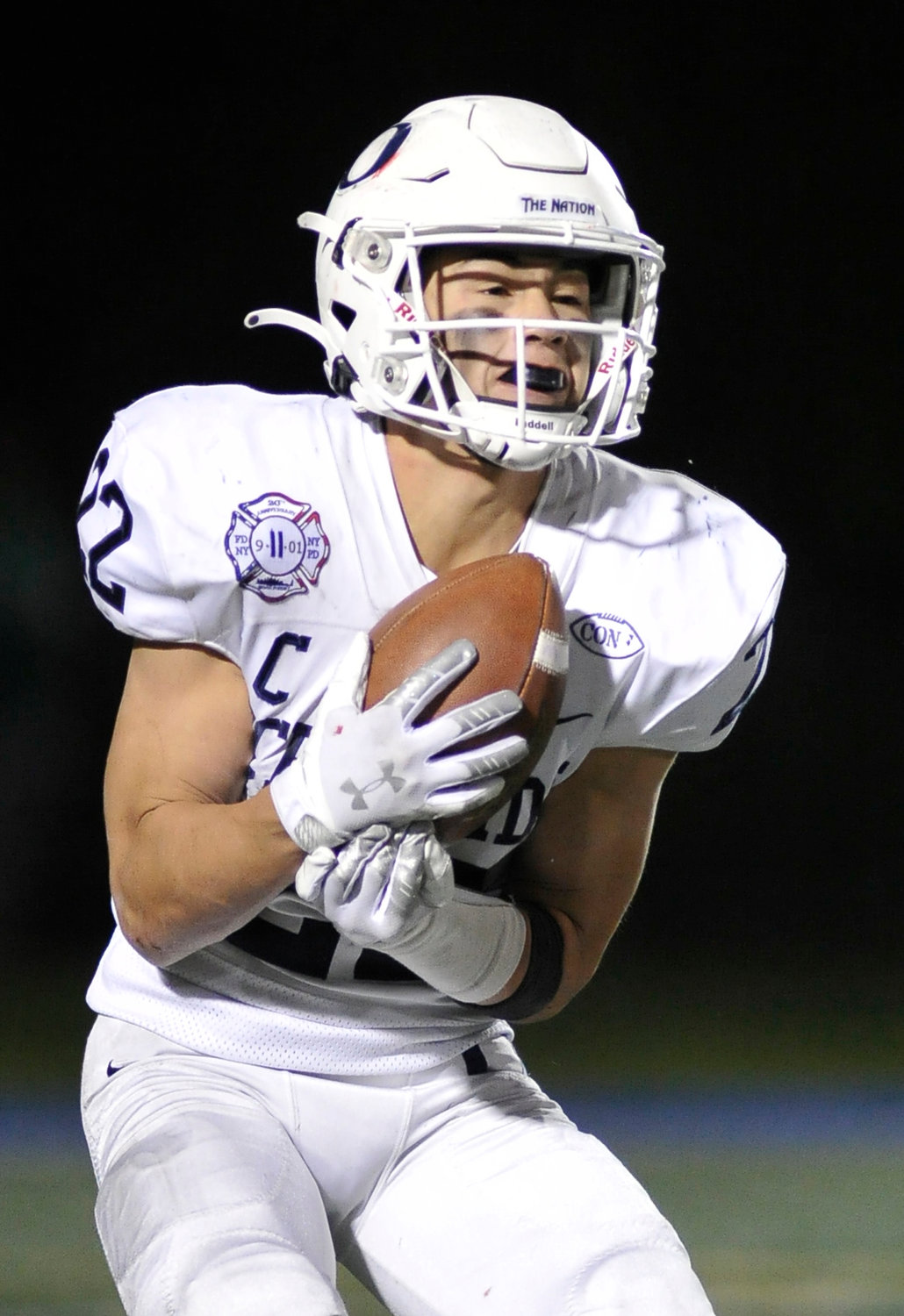 Ronnie Kraemer had a pair of touchdown receptions for the Sailors in last Friday night's 35-26 loss to Massapequa in the Conference I final.
Anthony Hughes/Herald
By Tony Bellissimo

Last Friday night’s much-anticipated Nassau Conference I football championship game rematch between Massapequa and Oceanside lived up to all the hype.

Unfortunately for Oceanside, it couldn’t flip the result from last spring despite four total touchdowns from senior quarterback Charlie McKee as the top-seeded Chiefs repeated as county champs with a 35-26 victory before a crowd of more than 4,000 at Hofstra.

Massapequa (10-1) amassed 229 yards rushing and three touchdowns on 39 attempts and will face Whitman for the Long Island Class I title on Friday at noon at Hofstra. Luke Ciolino had 64 yards rushing and 48 receiving on 6 catches, and his twin brother Jake Ciolino returned the kickoff to open the second half 73 yards for a touchdown to give the Chiefs a 21-13 lead.

“Our guys fought hard the entire game,” Oceanside head coach Rob Blount said. “We had some opportunities to swing the game in our favor that we missed. I’m proud of the way the kids competed and had another great season.”

The second-seeded Sailors, who finished 9-2, defeated No. 7 East Meadow and No. 3 Syosset in the playoffs on the way to reaching the county championship stage for the fourth time in five seasons.

McKee had two rushing touchdowns in the first half against Massapequa after scoring five times on the ground in the semifinal win over Syosset. In the second half, McKee (21 of 32, 215 yards) hooked up twice with Ronnie Kreamer on passing scores.

Massapequa quarterback Ryan Heidrich had one of its rushing scores and also hit Ryan Fountain for a 16-yard score through the air in the second quarter. Fountain’s 27-yard touchdown run with 1:51 remaining in the fourth quarter iced the victory.

McKee finished his illustrious high school career as Nassau’s all-time passing yards leader with 8,930. He had 94 career touchdown passes with only 20 interceptions and rushed for 31 touchdowns, including 17 this fall.