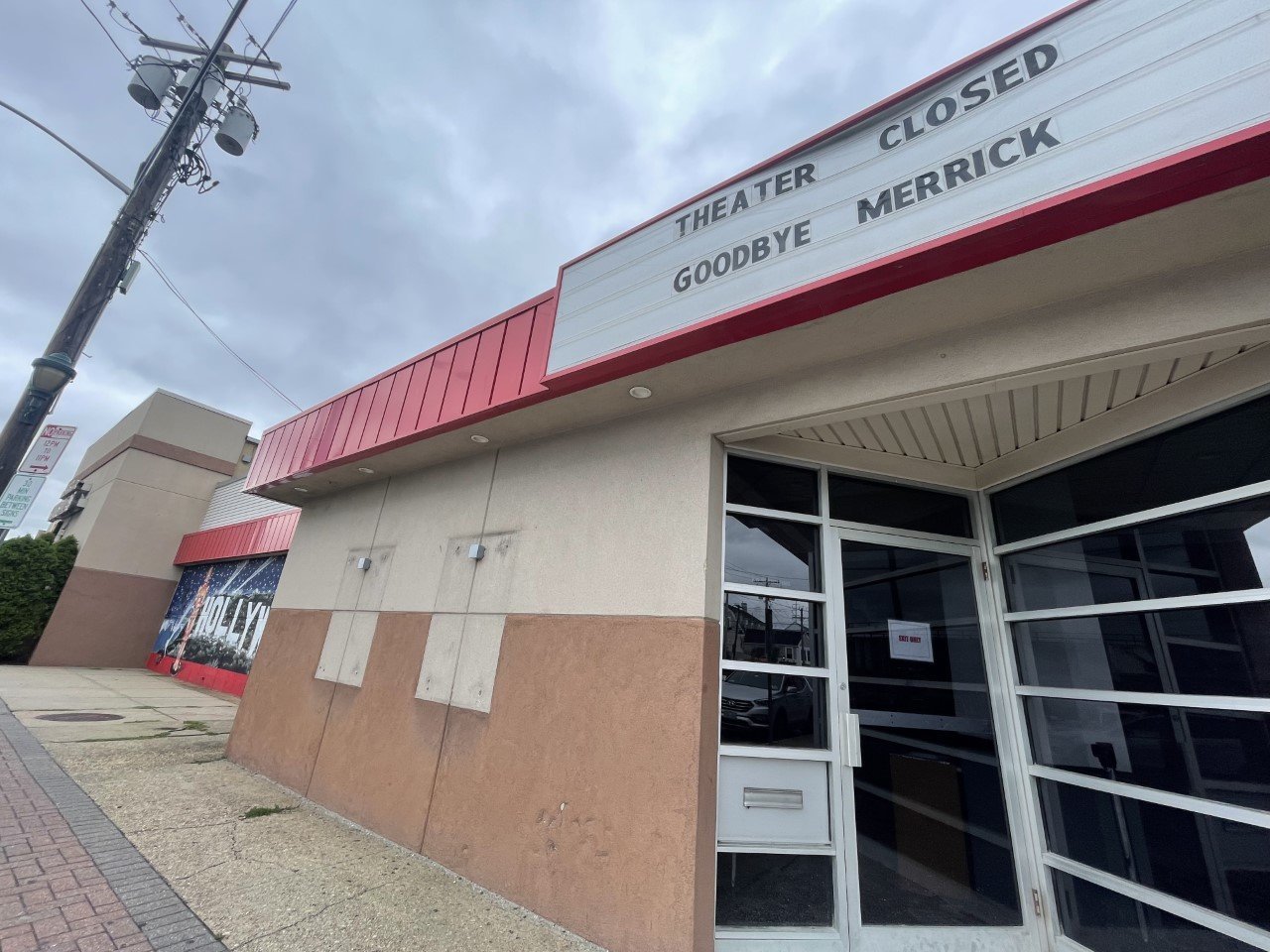 Merrick Cinemas V closed last month. The business, under its most recent ownership, has been open since 2017.
Jordan Vallone/Herald photos 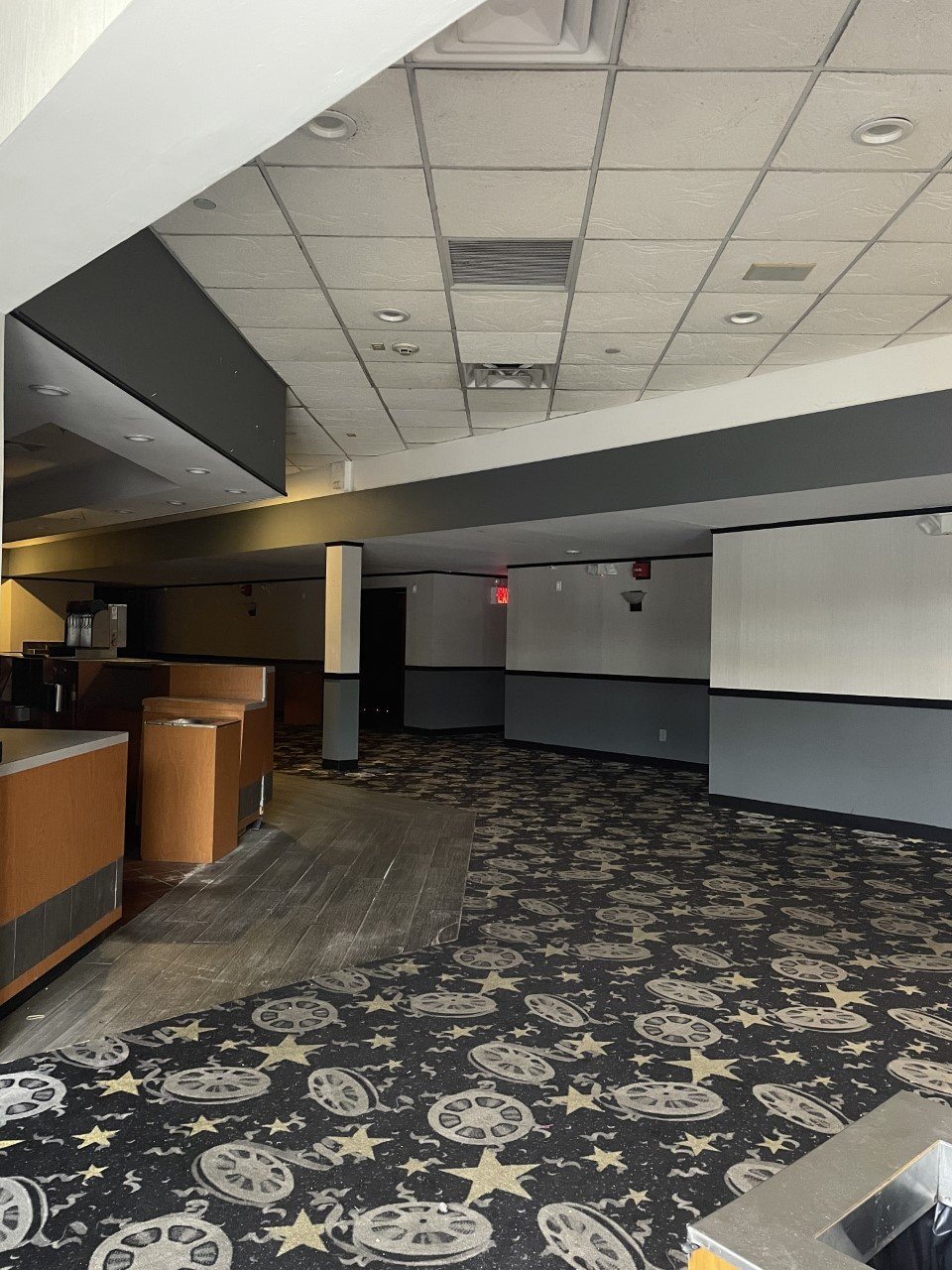 The theater’s interior was gutted, which has led to speculation about what may replace it.
Jordan Vallone/Herald photos
Previous Next
By Jordan Vallone

Merrick Cinemas V, on Broadcast Plaza in Merrick, has closed, just five years after it opened.

The movie theater, at 15 Fisher Ave. — at the entrance to the plaza — has been in operation there for about 20 years. It reopened under its most recent owner, Dean Theodorous, in October 2017.

At the end of August, its signage and movie posters were taken down, and replaced by a simple message: “Theater closed. Goodbye, Merrick.”

According to a statement on the theater’s website, the lease for the property is expiring, and the building is to be sold. “Despite our efforts to keep the theater open, the new buyers were unwilling to provide us with a new lease,” the statement said.

Joe Baker, a Merrick Chamber of Commerce board member, said that at one point there were three movie theaters in town. Baker used to own the maroon-colored house, where he had a coffee shop in the 1980s and ’90s, next to what was then a catering business, before it became a movie theater.

When Merrick Cinemas V closed suddenly, it came as a shock to many — including Baker. “It’s interesting,” he said. “Sad, but interesting.”

According to Loop Net, an online marketplace for commercial properties, the cinema is for sale, listed at $2.2 million by Cresa, a commercial real estate company. The site’s investment highlight, the website said, is its close proximity to the Merrick Long Island Rail Road station, making it an “excellent development opportunity.” Loop Net indicates that the property is under contract, but does not say who is attempting to acquire it.

Baker said he saw movie seats being moved into a tractor-trailer behind the theater on Fisher Avenue, likely indicating that whoever is acquiring the property would no longer operate it as a cinema.

He added that he was guessing he  could not say for sure, that a developer might seek to replace the theater with a multistory property, with businesses on the ground floor and living quarters above it.

There have been two notable proposals for apartment complexes in Bellmore over the past year: one to replace a closed Citibank branch on Bedford Avenue, and the other to replace the former Temple Beth El on Bellmore Road. A question raised repeatedly by residents is where apartment dwellers would park their vehicles if the existing lot space in both locations proves inadequate.

If an apartment proposal is in the works for the closed cinema, it would need to be approved by the Town of Hempstead, Baker said, to ensure that there is ample parking.

The cinema, he added, was in a good spot. Even though the lots in front of it are designated for commuter parking during weekday work hours, the town allowed the theater to operate in the plaza, because most people attend movies in the evening or on weekends. Broadcast Plaza intersects Merrick Avenue, where most of Merrick’s local shops are located. There is additional parking behind the cinema, on Fisher Avenue, for shoppers and, until now, theatergoers.

The theater was known for its low prices, and as a go-to location for private events, such as birthday parties.

“It was terribly shocking,” Vicki Ferretti wrote the Herald in a message on Facebook. “We had been there just a few weeks ago, and there were no indications that they were closing. It’s a shame really — the prices were great and they had just redone the theater, adding in reclining seats.”

Some agreed with Baker that an apartment complex may be in site’s future. Yvette Novo-Scamardella wrote that she thought the property “may be rezoned for residential use.” “Honestly, I am saddened by this,” she added of the theater’s closure. “It was a nice place to take your kids to.”

Others in the area said they hoped Cinemas V’s demise wasn’t an indication that other nearby theaters may also be shutting down. “It’s sad,” Wendy Shatz said. “I hope that doesn’t happen to the Bellmore Playhouse.”

With many people watching movies nowadays on streaming services, like Netflix and Disney+, Shatz added, “it can’t help the movie theaters” stay open.

Theodorous thanked Merrick, and nearby communities, for their support over the last five years. He said he was “deeply saddened” that the community would lose its local theater. “Our amazing employees,” he added, “will be part of our family forever.”