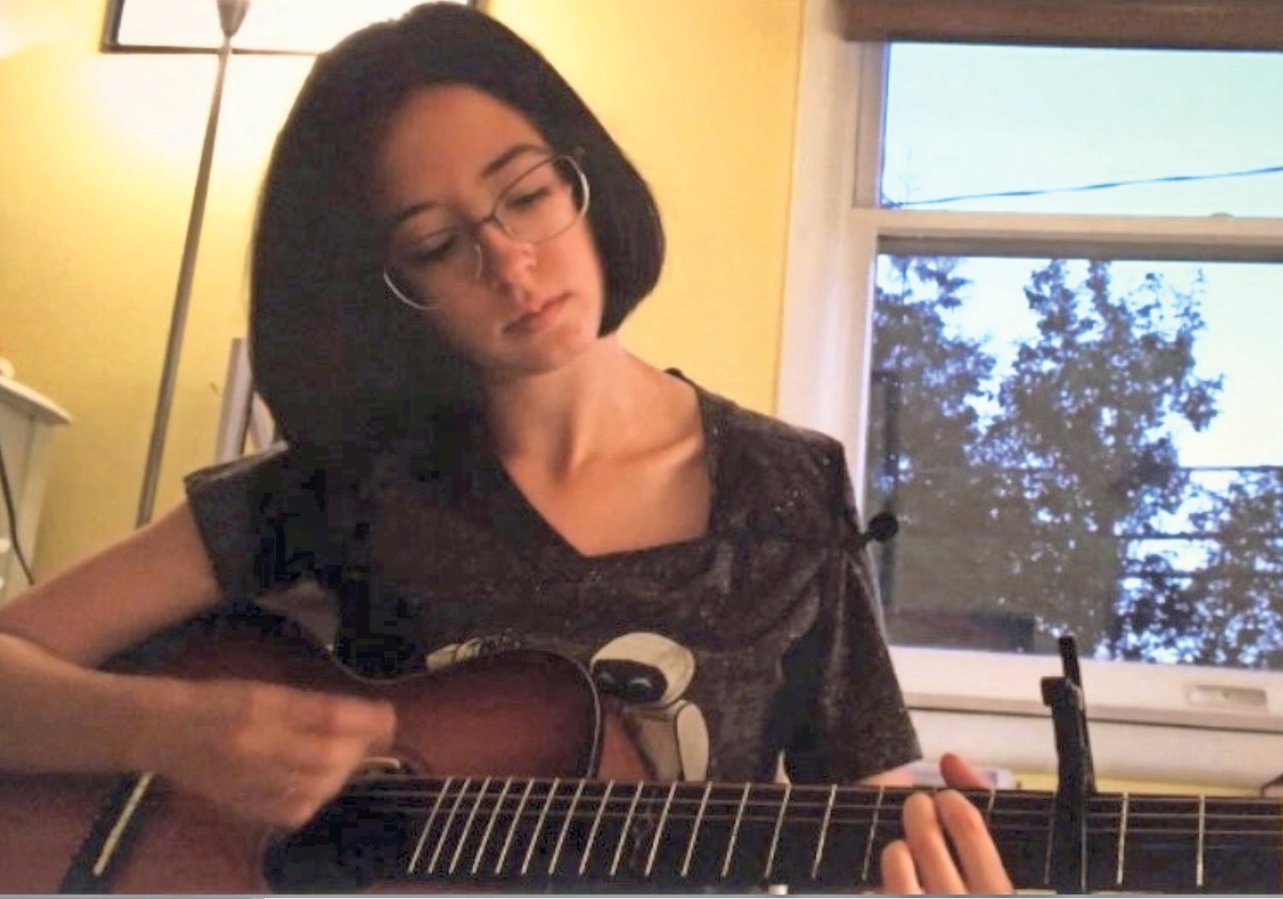 Elizabeth Wingert learned how to play guitar and ukulele during the pandemic and discovered her talent for songwriting.
Courtesy Maria Wingert
By Mallory Wilson

At the height of the coronavirus pandemic, when schools and jobs were remote, many people returned to hobbies that their day jobs and packed schedules hadn’t allowed them to enjoy. Seaford High School junior Elizabeth Wingert added to her already considerable musical abilities by teaching herself how to play guitar and ukulele. She also discovered a new passion — songwriting.

Wingert, 16, said she was influenced by many musicians, especially Johnny Flynn, a British alternative and indie singer-songwriter. “Every time I listened to his songs,” Wingert said, “I always thought, oh, I would love to learn to do songwriting.”

She didn’t write her first song, though, until April 18, 2020, after taking part in the Tuning Meditation, a worldwide Zoom session that Wingert described as a bunch of musicians around the world playing songs they’d written. “It just blew my mind that all of these musicians were playing so many different songs,” she said. “I just said, you know what? I’m going to try songwriting, because it seemed so incredible.”

So she sat down and wrote her first song, based on a poem she had written in sonnet form titled, “What’s in My Heart.” It took her half an hour. “It was such a cool feeling to finish,” she said. “I saw myself and the world on a whole different level, and I wanted to spend the rest of the pandemic doing that.”
Now, some 80 songs later, Wingert doesn’t think she’ll run out of ideas anytime soon.

She grew up in a musical family: Her mother, Maria, played violin and other instruments, including the piano; her father, Matthew, played guitar and drums; and her younger brother, Christopher, now 15, played three different saxophones. Her mother, Elizabeth said, began teaching her to play violin when she was 5.

“I just always loved music, and I always wanted to be able to create my own music,” she said. “I like being able to express myself that way.”

Her mother, a music teacher in Deer Park, said she always wanted to instill a joy of music in her children when they were young. “I had no intentions of pushing them into making music a career,” Maria said. “I just wanted them to have the same experience as I did, in the sense that music was always in my life, and it was such a positive thing that I just wanted to share that with my kids.

“One day during lockdown,” she continued, “Elizabeth said she was going to write a song, and I told her to go for it. We were all stuck in the house, and it was good that she wrote, and I encouraged her to keep going. It was a creative burst.”

Yvonne Bendzlowicz, the director of choral music at Seaford High School, said that Wingert was the only one of her students who wrote music during the pandemic, and that it was cool to see her come out of her shell.

“She’s very introverted, but when she plays and sings, she’s extroverted,” Bendzlowicz said. “I would say most people find it very intimidating to do any type of music, but Elizabeth just went for it.”

Wingert launched a YouTube channel in July 2020 to get her music out there. At the time she was also doing live videos on Facebook. Bendzlowicz urged her to start doing Instagram live videos, too.

“During the pandemic, I kept telling students to stay busy,” Bendzlowicz said. “I was learning the accordion, and Elizabeth really followed through with writing poetry and novellas and then putting music to it.”

Many of Wingert’s songs are based on poems she writes. She has written songs about Jane Austen, Earth Day, the war in Ukraine and story characters she’s created, among other topics.

“I always wanted to write songs that helped people and make people aware of what was going on,” she said. “I did a lot of climate-change songs, and healing songs and people would tell me that they’ve watched my YouTube videos and that they really helped them, so I felt like I was actually doing something.”

The feedback from people hearing her music was always positive, her mother said. Family members in Malta loved listening to Elizabeth play. “People were so happy to be able to see live music, even though it was through Zoom,” Maria said. “Everybody was just dying to connect, and this was a really nice way to do that.”

Elizabeth said she has always wanted to be an author, and wants to focus on that when she graduates from high school. Music and art will always be a part of her life, she said. “I would love to find some gigs and coffee shops to play in,” she said, “and maybe one day produce an album.”