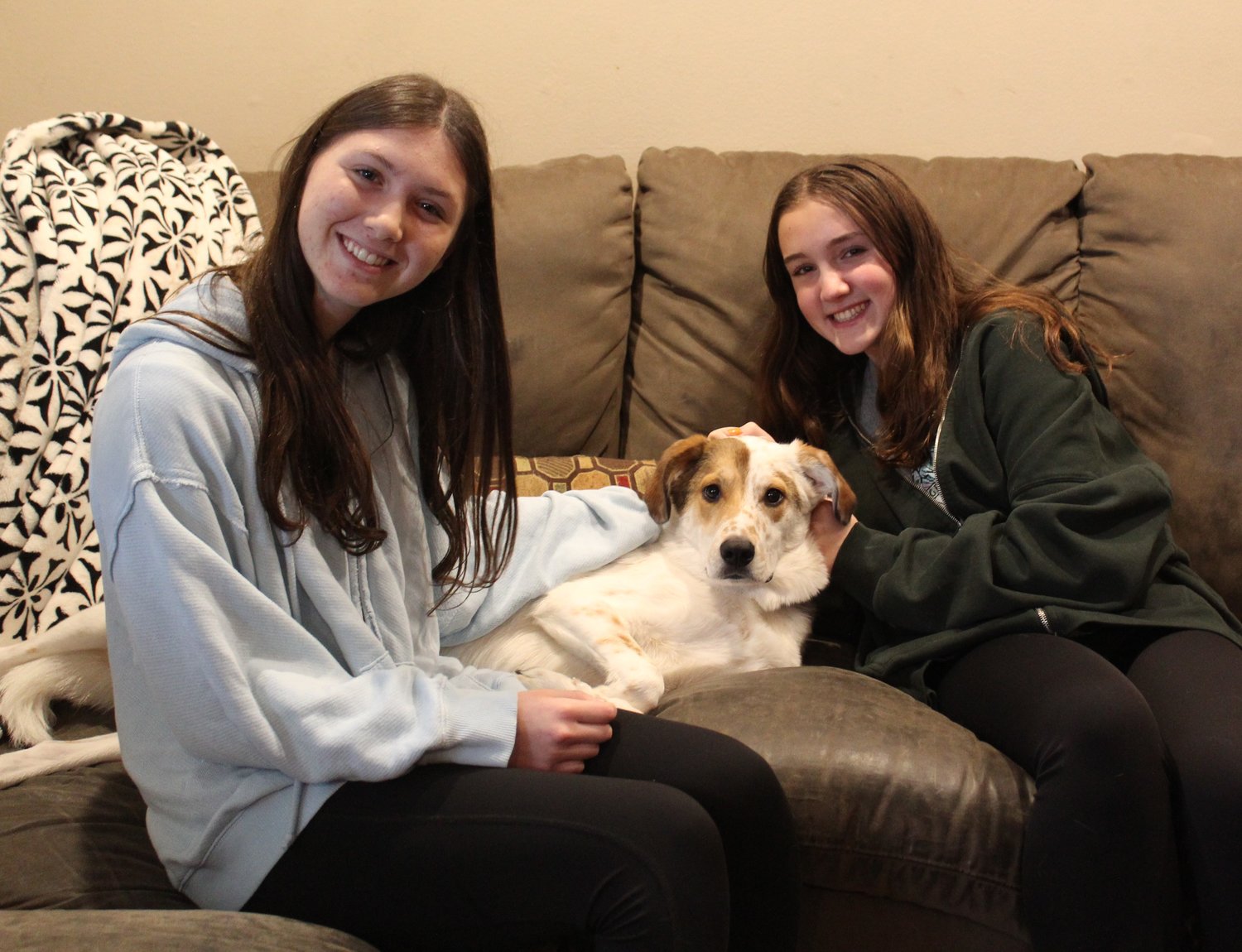 Paws for a Cause founders Sydney Dolger and Riley Rugolo sit with Dolger’s dog Rari, in middle, who helped inspire giving back to Posh Pets animal shelter in Long Beach.
Karina Kovac/Herald
By Karina Kovac

Sydney Dolger and Riley Rugolo have an affinity for furry friends that has started spilling out of the classroom. Tenth graders at Oceanside High School, they participate in the same clubs together such as DECA, Care Club, Key Club and more, but now they’ve started a foundation of their own. Paw for a Cause began after Dolger adopted her dog Rari at Posh Pets in Long Beach, now they’re giving back to the animal shelter that’s given Dolger a companion of a lifetime.

In September, the 15-year-olds joined DECA, where they write papers about different categories, totaling some 500 options to choose from. But they took the task a step further, choosing the community giving prompt which is the only hands-on category. “Me and Sydney are both very hands on people and we both really wanted to do something and we’re both very interested in: giving back to our community,” said Rugolo.

“We saw community giving and that’s the one of the few you actually had to do something whereas the others are more fictional,” Dolger said, “And we really wanted to give back and do something where we could show our appreciation and help the dogs and the other animals in the shelter that are really in need of everything we could possibly give them.”

Dolger has a connection with Posh Pets since she chose her beloved Rari there in June and where her mother volunteers as a dog walker. “I just loved everything about the shelter,” she said, and when she saw Rari it was love at first sight.

Rugolo also has experience in adopting, choosing her dog Gina at a Petco and Ruff House Rescue event. “I really was passionate about doing Paws for a Cause because of my experience with adopting animals from shelters and how helpful they are,” she said. Working off of a common interest and goal, they began to send email after email asking teachers and local organizations for help getting supplies and exposure for their cause.

There messaging paid off, and community support came pouring in. They partnered with Girl Scout Troop 2884 and if any scout donates, they get a paw print patch. Teachers offered extra credit and Key Club said they’ll give community service hours.

“It was shocking, but so amazing to see how willing people were to support us and especially so many of our teachers are like ‘that is so amazing,’” said Rugolo. And the experience working together for a common good has made them closer friends.

“I think it definitely strengthened our friendship, like we got to spend so much more time together and just working on it and fostering new ideas. I had no idea how passionate she was about dogs also. I didn’t even know how passionate I was about dogs. I started writing this paper and it really just opened my eyes to so many things. And I’m really glad it did,” Dolger said smiling.

Rugolo agreed even though it was more work than the other papers they could have chosen, it was the most rewarding. “I think I’ve been so much happier exploring more and kind of finding myself, especially in this. I’ve had so much fun doing this and it’s been a really amazing,” she said. “There’s so many things you can do to get involved in, it makes it so easy to really just go out there and be your best self.”

If interested in donating dog and cat toys, food, beds, sheets or towels or other pet related items a donation table is set up in the main lobby of the high school. Donations will be open from 7:50 a.m. until 2:35 p.m. through Dec. 9.