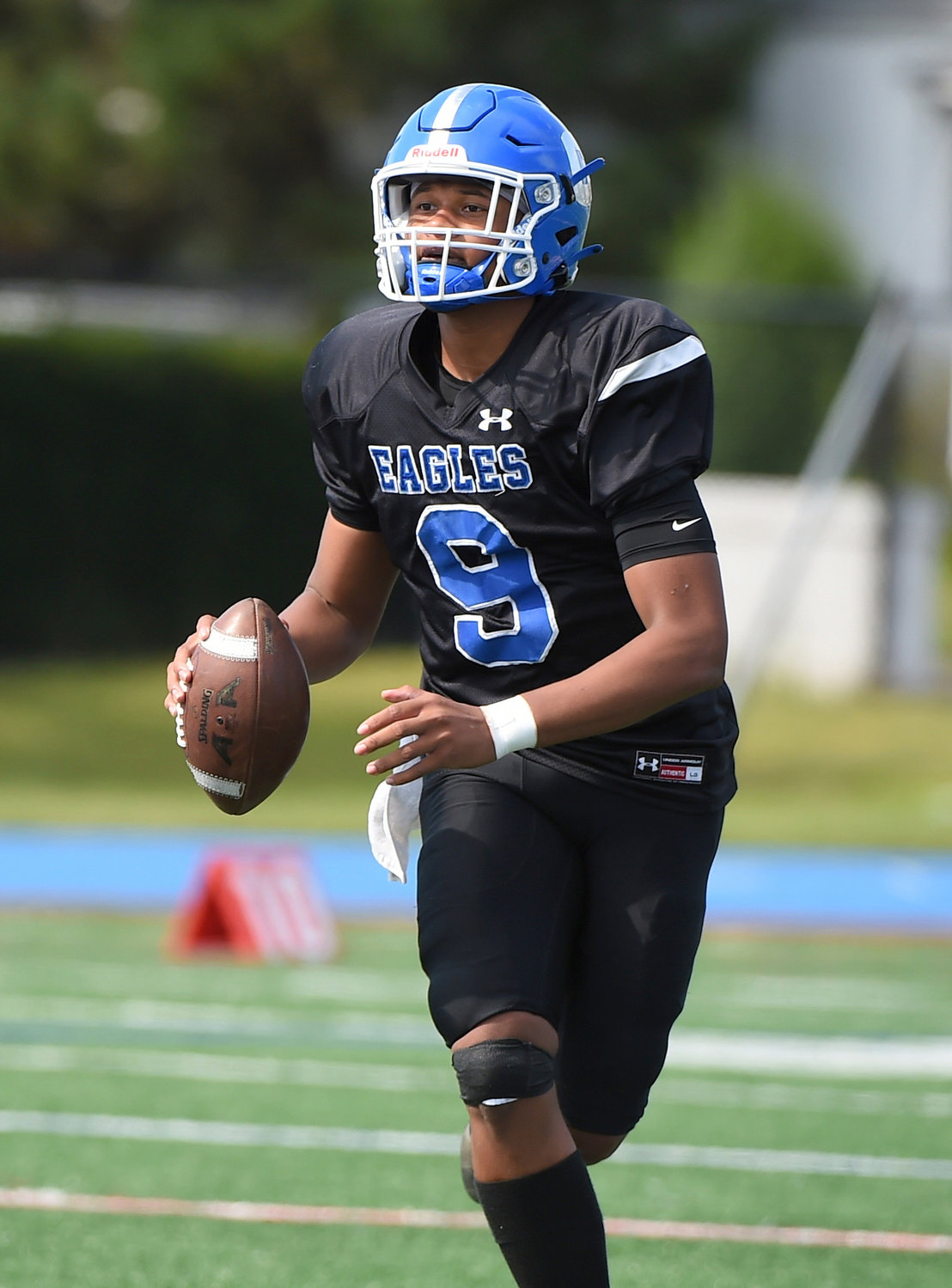 Senior quarterback Quran Watkins and the Eagles got back on the winning track last Saturday against Herricks and take a 3-3 record into the final two weeks.
Donovan Berthoud/Herald
By Tony Bellissimo

Coming off consecutive shutout losses, Valley Stream Central stayed focused on the big picture and got its offense in gear last Saturday with six touchdown drives in a 41-21 victory at Herricks to even its record through six Conference II football games.
The Eagles, who moved into fifth place in the standings with 116.67 power rating points, took the lead for good on junior Josh Rogers’ 2-yard touchdown run late in the second quarter. Senior quarterback Quran Watkins was the offensive catalyst throughout the day and finished with two passing scores and two rushing scores.
“The kids have bought in since the first day of practice and even though we were coming off two tough games, we felt we improved,” Central head coach Mike Rubino said. “It’s a young team that’s growing week to week. I told them not to listen to any of the outside noise and just control what they can control.”
Rubino was particularly pleased with getting the air attack going. Watkins connected with junior Mohammad Daffalla for a 33-yard touchdown in the second quarter and iced the victory with a 30-yard scoring strike to senior Courtney Lord in the fourth. Watkins also hooked up with sophomore Jordan Jean-Joseph for a long completion to set up his own third-quarter touchdown run.
“Our timing hasn’t been there in the passing game, but we got in sync,” Rubino explained. “The emphasis during practice over the last few weeks has been the passing game. We knew we couldn’t run the ball 90 percent of the time. We need to have balance.”


Herricks (1-5) went toe-to-toe with the Eagles through the first 20 minutes. The hosts led 7-0 before Central answered with senior Jason Dalis’ 18-yard touchdown run to get within a point. It was tied at 14 late in the second quarter.
“They threw some different things at us we hadn’t seen on film,” Rubino said. “Nobody on our side hit the panic button. We stayed calm and made plays.”
The Eagles, who were blanked by upstart New Hyde Park and five-time defending county champion Garden City, reached the end zone in all four quarters at Herricks. They also got a huge performance on the defensive side from senior Antonio Padilla, who had eight tackles and two interceptions.
“I think we showed our maturity and growth by putting the game away when we had a chance,” Rubino said. “We weren’t able to do that against Sewanhaka earlier in the season.”
Next up for the Eagles is their homecoming game against Long Beach this Saturday. Kickoff is 2 p.m. at Memorial Junior High. The regular season finale is Oct. 30 at Carey.
“Two big ones,” Rubino said. “Long Beach does a great job on defense and our guys know it’s going to be a war. On the bus ride home from Herricks, Quran was telling everyone the next game we’re going to see one of the best defenses we’ll face all season.”