Artists use vacant Oceanside storefront as their canvas 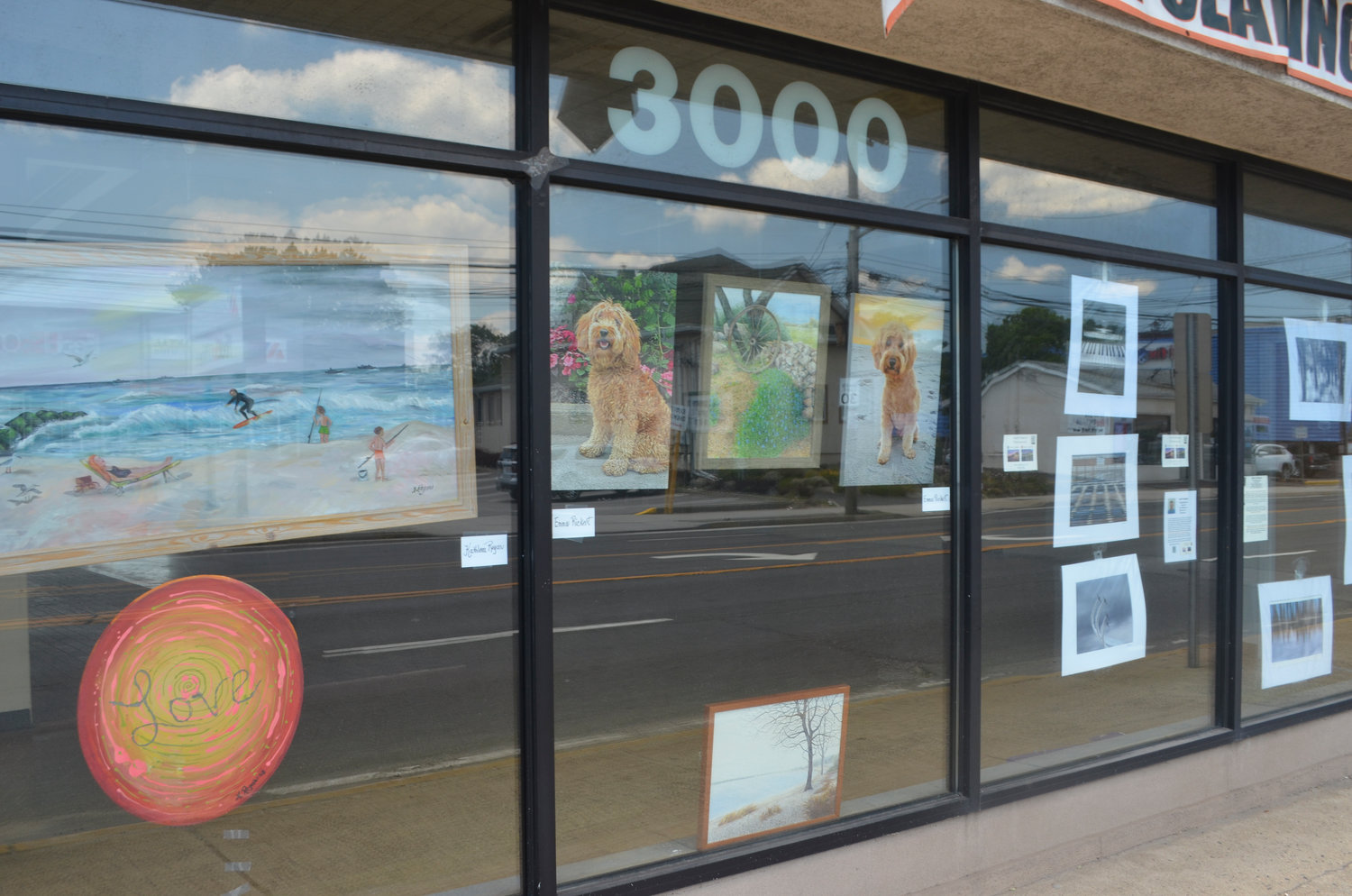 Artists used the vacant storefront of the former Jandi’s building as their canvas in hopes of attracting a new business to the spot.
Tim Baker/Herald 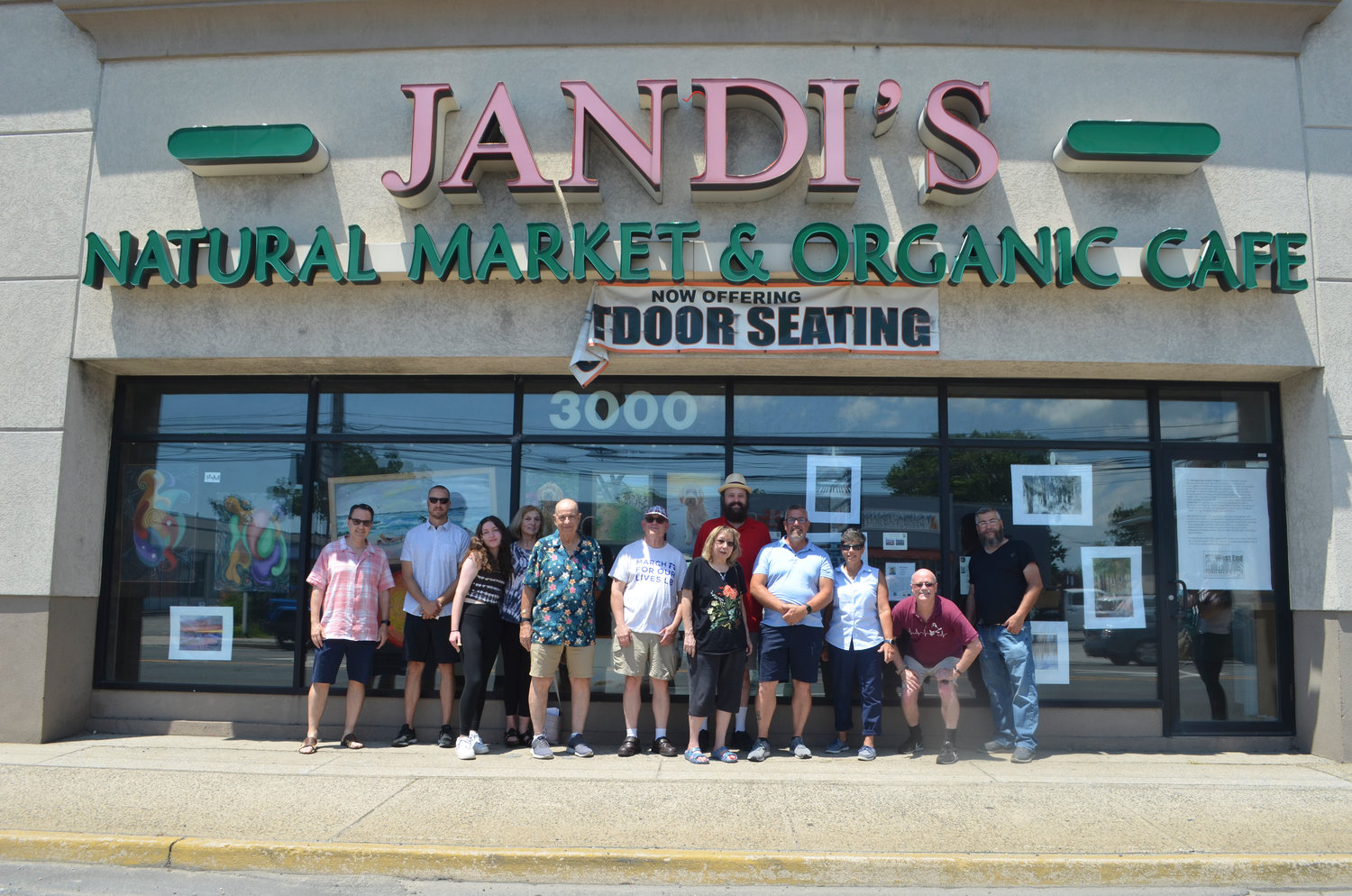 The West End Arts Guild, the Oceanside Chamber of Commerce and artists all collaborated to help boost business in the community for the Window Works Art Project.
Tim Baker/Herald 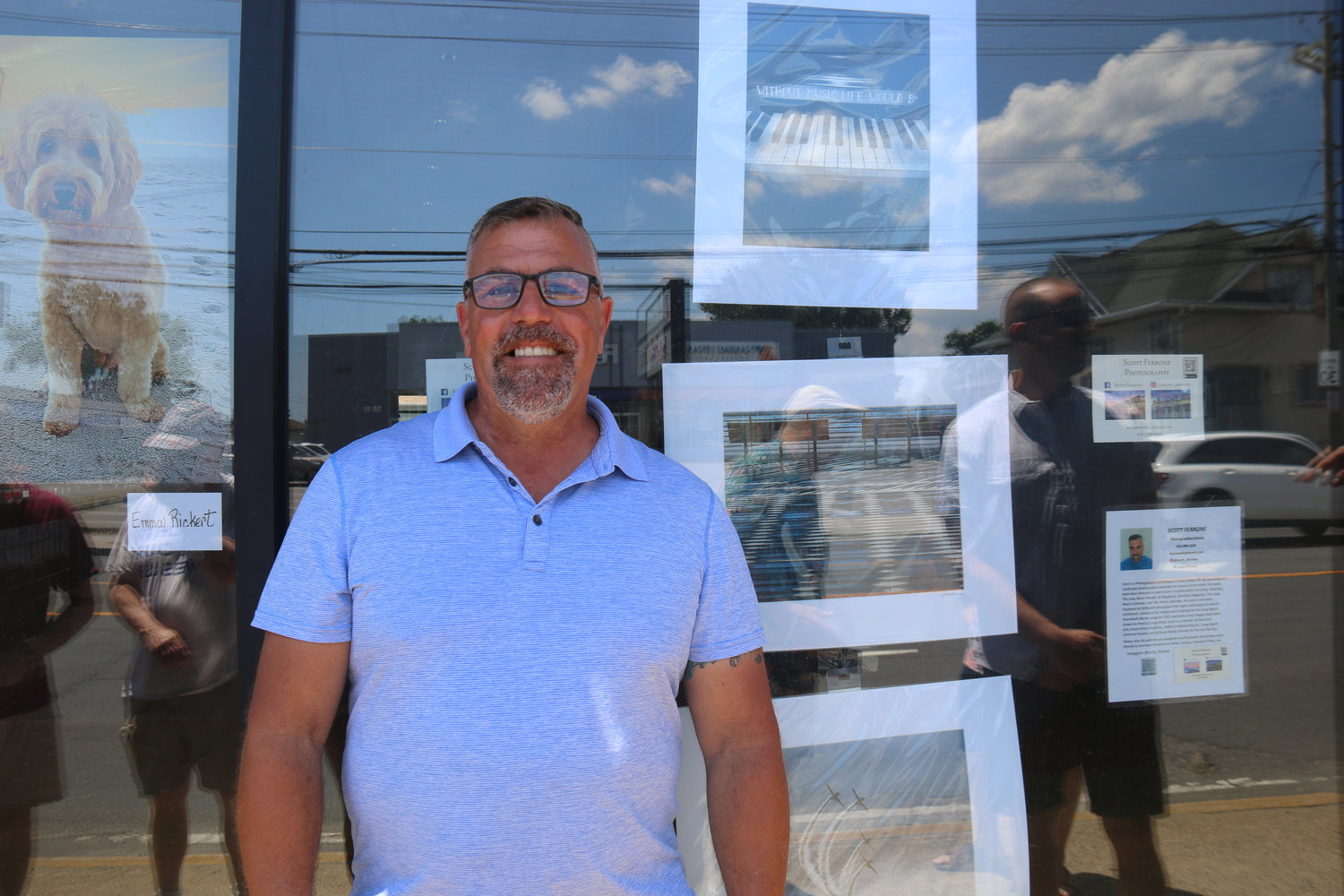 Scott Ferrone, a member of West End Arts, with his photography in the storefront gallery.
Taylor Nicioli/Herald
Previous Next
By Taylor Nicioli

Several storefronts along Long Beach Road sit empty, but on June 25, the Oceanside Chamber of Commerce and the West End Arts Guild kicked off an initiative called the Window Works Art Project, hoping to fill these once-vibrant businesses with life once again through art.

The groups gathered in front of one in particular, the former site of Jandi’s Natural Market and Organic Café, to show off the artwork that had been placed in the windows by local artists.

The building, once was a well-known spot to eat and shop for health food, has been empty since June 2020. Now the project participants hope that artwork in the windows will at least give those walking by a lift.

“With this project, we’re trying to improve the business district and the Oceanside community in two ways,” chamber President Paul Engel said. “One, we have business spots that are vacant, that can be an eyesore, and putting art in the storefront can be uplifting to the passersby. Two, the artwork will make the building more attractive, in hopes of bringing in more businesses in as well.”

West End Arts is a visual arts guild founded in 2004 in Long Beach, with a focus on helping two- and three-dimensional artists in western Long Island. It hosts art exhibitions, monthly meetings with professional artists as guest speakers and community service events. Its president, Kathleen Regan, said that Window Works started in 2016 in Long Beach, when the city was still feeling the effects of Superstorm Sandy, but guild members decided to expand into Oceanside after seeing the positive impact the project had on the business community.

“We noticed in Long Beach, there were many empty storefronts, which was very depressing for people who lived in the community,” Regan said. “So what we thought we would do is beautify those empty storefronts and bring positive attention to them. We then saw that the stores were getting rented out quicker.”

Barbara Lobosco, a member of both the Oceanside chamber and West End Arts, as well as an artist in the show, served as the liaison between the two organizations, helping bring the project to Oceanside. “I hope it’s an inspiration for the dormant artists that are in Oceanside, so they’ll visit the gallery, see our mission statement and come join West End Arts so that they can branch out into the community,” Lobosco said.

Ferrone, an Oceanside resident for over 20 years and a member of West End Arts for two, said that the organization had helped him grow as an artist with the events it put on in Long Beach. He added that having his art on display on a prominent thoroughfare would give him unprecedented exposure. “It has allowed for me to launch my photography to the next level,” he said. “With this, it’s a window set gallery, so hopefully it will give us all recognition on our individual work.”

Next to the vacant lot stands a Sherwin-Williams paint store that has been there for almost three years. Bill Tomasulo, a sales associate, said he didn’t think the closure of the business next door had much of an effect on the paint store, but did think the artwork could draw potential new business. “We see a lot of people walk by from time to time,” Tomasulo said. “Art is great for drawing attention.”

The Chamber and West End Arts say that although the art is currently only housed in the former Jandi’s, they hope to expand into other vacant storefronts, and to make Window Works an annual event. “With the many empty storefronts on Long Beach Road,” Regan said, “our hope is to get into those, too.”

The artwork is scheduled to be up until the lot is rented, and some pieces will be offered for sale. The gallery can be seen at 3000 Long Beach Road. Engel added that any potential new business is welcome to keep the art in their storefront.