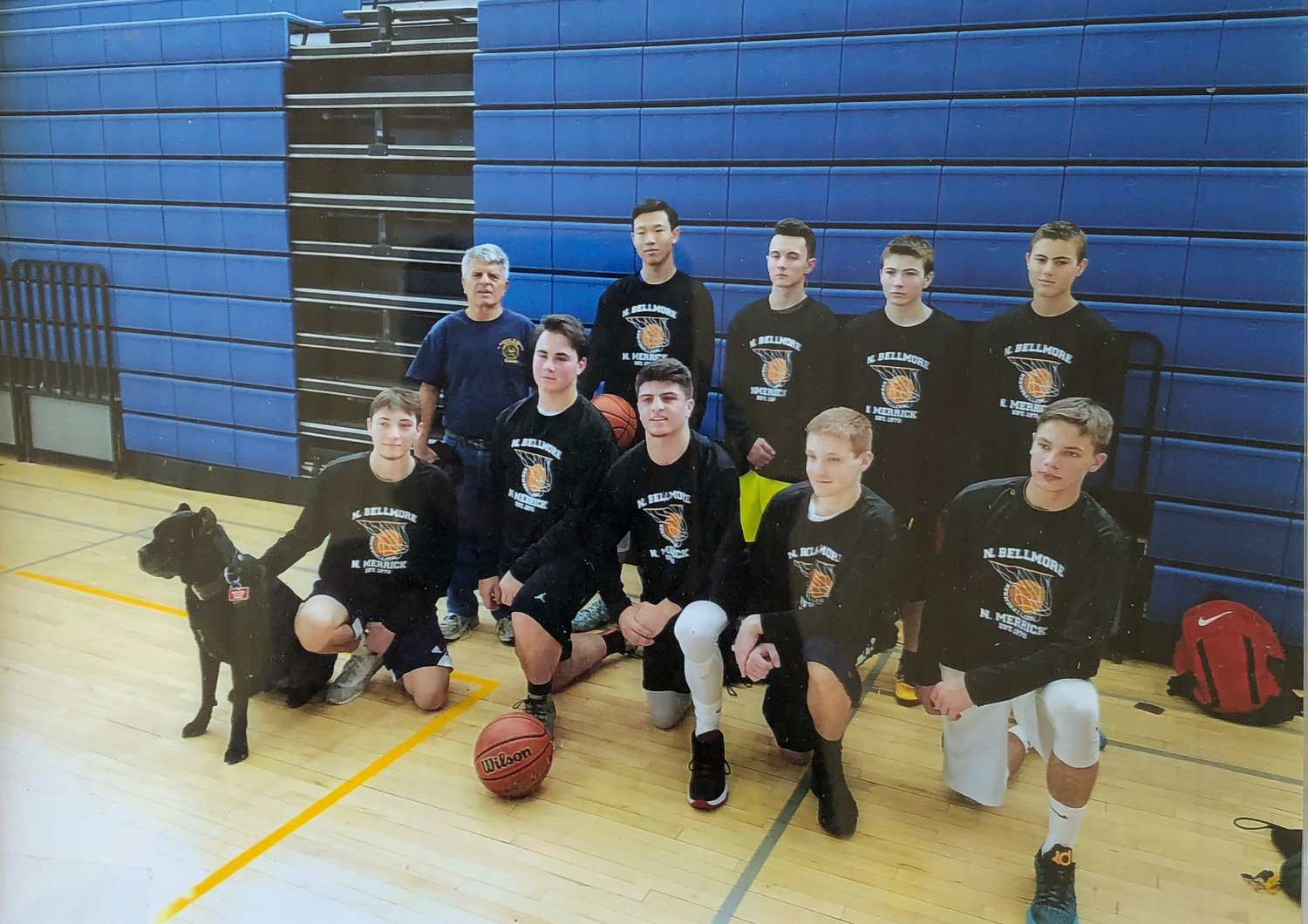 Herb Maletz, a longtime coach in the league, saved his team’s photos throughout the years. Above, Maletz with his 2016-17 SuperSenior team, which won the league competition that year.
Courtesy Herb Maletz
Previous Next

We don’t have a future if we don’t do something.”
Kirk Oshan, Board member
By Jordan Vallone

The North Bellmore- North Merrick Basketball League, which has been around since the 1960s, is in danger of folding this year, due to a lack of volunteers to help lead the program.

Kirk Oshan, a board member, has been involved in the league for roughly 20 years, he said. His children played in it, and he did, too, when he was a child.

At its peak, Oshan said, the league had roughly 650 active boys and girls, from second-graders to high school seniors. It was unable to have a season for the last two years due to the coronavirus pandemic, but in 2019 there were 475 players and enough active board members.

“Maybe in the last 10 years or so,” Oshan said, “things started to the change.”

Coaches began leaving the league, he said, followed by administrators, for a variety of reasons. Often it was because people were retiring and moving, or because their children were no longer in the league. Now, Oshan said, after the two-year hiatus, it is becoming increasingly difficult to find new volunteers.

The games are non-competitive. “Every kid on every team plays the same amount of time,” Oshan explained. “It’s more about how to play the game, about sportsmanship — and hopefully, having fun.”

Todd Kamelhar, one of the league’s co-presidents, has served on its board for eight years, and has been president for the last five. “I was really recruited by a bunch of guys who had a passion to keep this league alive,” he said. “My kids graduated and I was already on the board. I stayed on because of the great experience my kids had in the league.

“We only have one director who still has kids in the league, and that’s kind of sad,” Kamelhar added. “We can’t get parents to volunteer.”

The season normally begins in November, and ends with playoffs in March. Oshan said every that team, regardless of its regular-season record, qualifies for the playoffs. In the 2019-20 season, the league had 45 teams compete.

The league is non-profit, and the season usually consists of 10 games, though for the 2022-23 season it may consider reducing that number to eight, in the interest of reducing costs, but those factors are still to be determined. Fees are remarkably reasonable compared with those of other youth sports, Oshan noted, and include a mesh jersey.

The league’s directors are more involved, Kamelhar said, and at least one attends every single game. “Our league is all based on fairness,” he said. “It’s designed for kids who just want to play.”

The games are played in gyms in North Bellmore and North Merrick, in the area’s high schools, middle schools and elementary schools. Before the season starts, arrangements are made with the school districts, and the league hires referees to officiate the games.

“We have to have the proper insurance,” Oshan added, “and we’re on top of our game in terms of what needs to be done.”

The league is not limited to residents of North Bellmore and North Merrick. In the past, children from Bellmore, Merrick and East Meadow have played. What it boils down to, Oshan said, is volunteers who are willing to join and help keep the league alive.

“We don’t have a future if we don’t do something,” he said. “The league is going to have to shut down. I feel sick about it — I want a place for these kids to play.”

Herb Maletz, a longtime coach and a past president of the league, said he’d be sad to see it fold. “It looks like we’re going out of business,” he said. “We don’t want to close down — the community loves us — but we can’t go on without help. We desperately need new blood to continue.”

As of now, Kamelhar said the board is not prepared to run the league again in 2022-23, and that it needs at least five new volunteers. “This is all about time,” he said. “We need to make a commitment to have the season happen. It takes a village.”

“It’s been a really long time (that) this league has been here,” Kamelhar said, “and it would be a shame for it to have to end.”