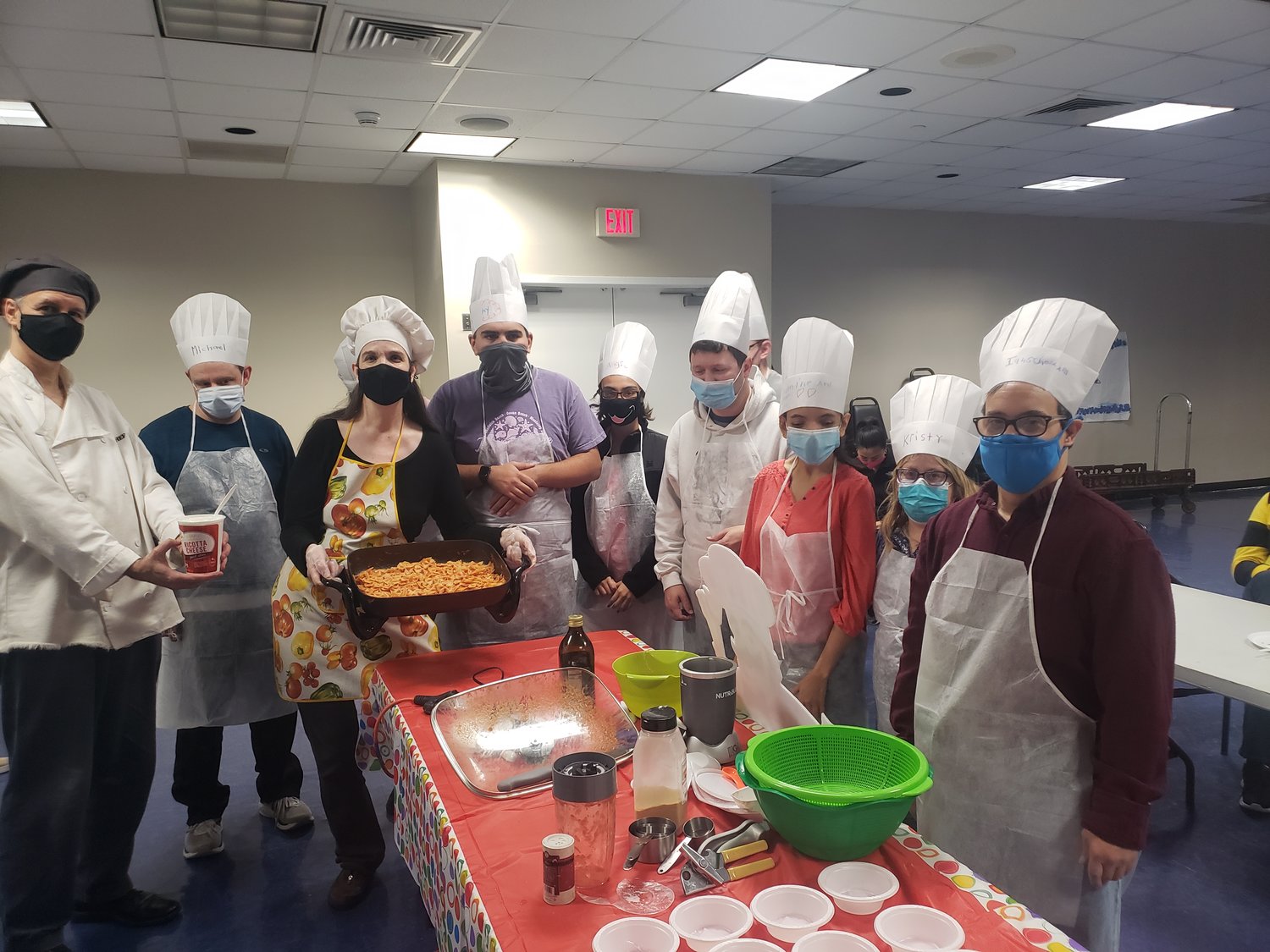 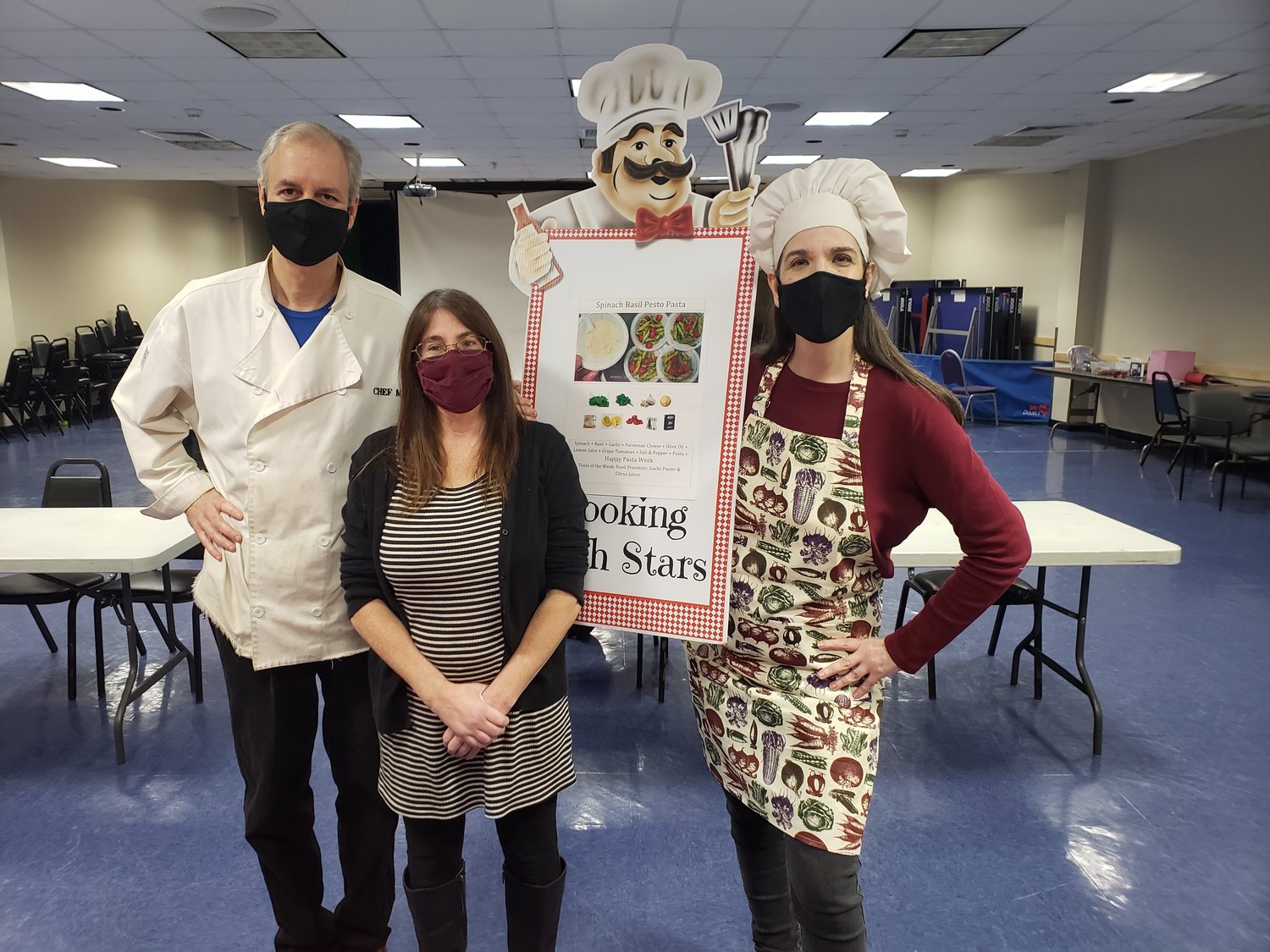 left, Chef Paula Gottlieb Herman, right, along with her husband, Michael Herman, and JCC Senior Program Director Marcy Hallerman, has been cooking up a storm as a chef since 2005, offering classes at JCC’s and in the schools.
Kepherd Daniel/Herald 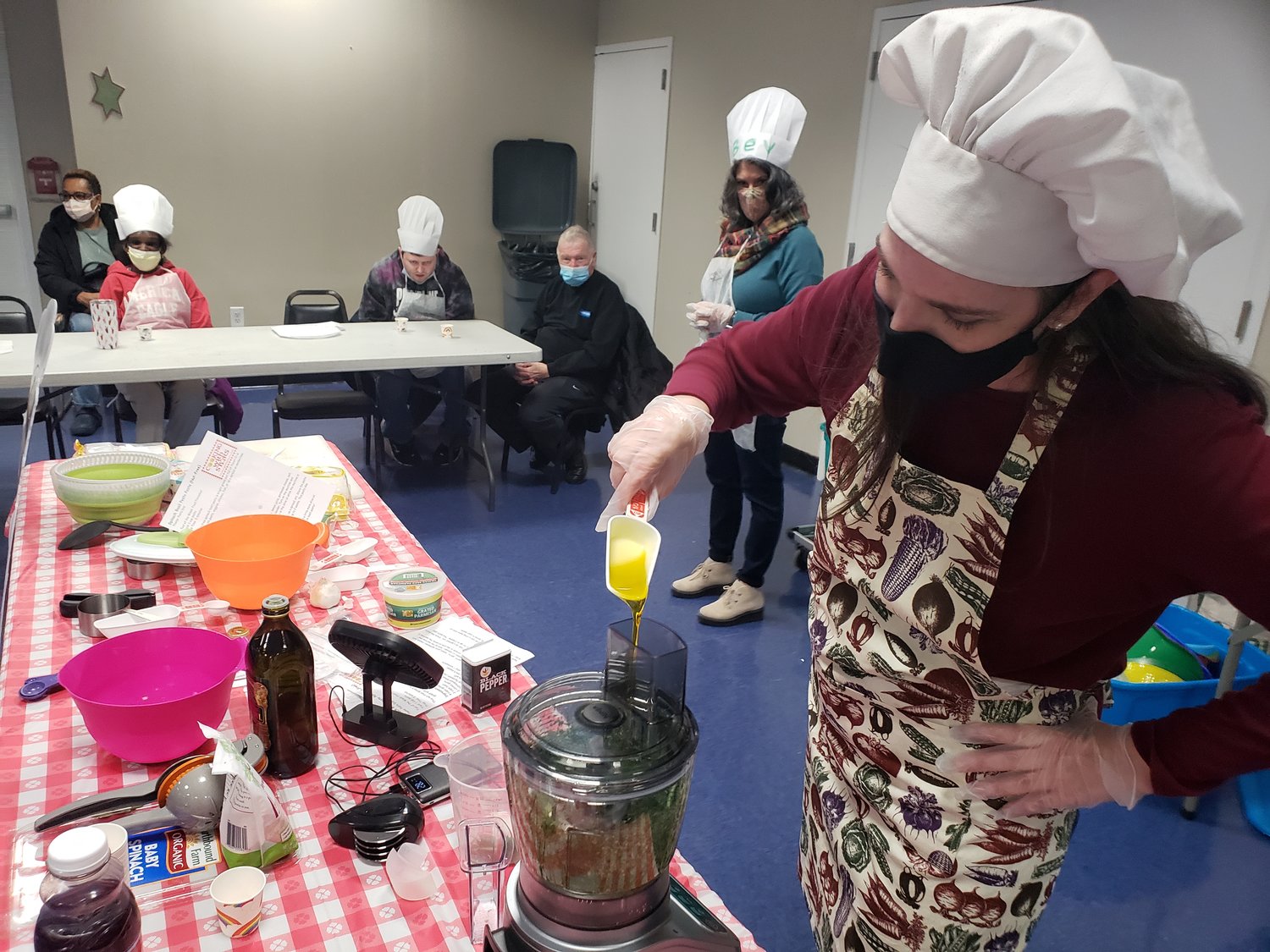 Chef Paula Gottlieb Herman hosts cooking classes across Long Island, including the Barry and Florence Friedberg JCC Cooking with Stars class in Oceanside for adults with special needs, such as those Down Syndrome or autism. The class, with 18 people, has been in person since October.

On the menu for the Dec. 22 class was a spinach basil pesto pasta. After the class watched Gottlieb Herman, 59, who has taught at the JCC since 2014, prepare the meal, they enjoyed an afternoon of Italian cuisine.

Gottlieb Herman didn’t start out to become a chef. “My original background was television,” she said. “I used to work for NBC News. I used to produce food segments and other special segments for the Sunday version of ‘The Today Show.’ I worked on ‘The Today Show,’ I worked on ‘Nightly News,’ I did behind-the-scenes for Martha Stewart, all kinds of stuff really. But although my chosen career was television, the food segments were the thing I loved the most.”

Gottlieb Herman worked increasingly longer hours as her career took off — at times as many as 80 hours a week. However, she had to shift her focus once health scares began to appear in her family. “My dad got ill, and at the same time that happened, NBC was bought by GE, and as a result of that purchase, eventually my job was eliminated,” Gottlieb Herman said.

She left NBC in 1993. “I knew I’d be able to get a job those years,” she said. “The problem was my dad, and I couldn’t take 80 hours a week away from him when he needed me. I put my career and TV on the back burner because family always has to come first.”

She went into market research, organizing focus groups for L’Oreal, Lancome and other high-end companies. Eventually, things settled enough with her father’s health, and in 2001, she married her husband, Michael Herman, whom she met in 1995. “He wanted to get married way sooner, but my parents were my priority,” Gottlieb Herman said.

Soon after, the unexpected occurred. Nine months after their wedding in 2002, her father died. “It was something I just didn’t expect,” Gottlieb Herman said. “I needed a way to honor his memory.”

Gottlieb Herman received advice that would shape the rest of her career. “When the timing is right, sometimes people will give you the most sage advice, but sometimes the timing is wrong. You’re in mourning and you can’t listen. Thankfully, on the day of my dad’s funeral, the gentleman who did my dad’s service said to me, ‘I want to give you a piece of advice, and I really hope you take it. Think of ways to honor your father’s legacy that meant a lot to him.’”

Gottlieb Herman knew immediately what her father loved and what she had to do. “My father loved food,” she said. “He did cooking classes, catering classes, we would go to restaurant views for fun in Brooklyn. If I become a chef to inspire others, then that’s my dad’s legacy.”

In 2005, Chef Paula was born, and she has been at it ever since. “When I launched, my mom was at that point ill, and so I wasn’t able to go full throttle,” she said. “But when my mom passed the following September, it was all hands on deck. My mom did see me as a chef.”

Despite the global pandemic, Gottlieb Herman continued her cooking classes with help from her husband. “2020 came, and it was a gut punch because my entire business was on the line,” she said. “Prior to the pandemic, I was in 14 schools and also JCCs. But the schools were not reopening, and we needed to go virtual. I had no clue how to do it. I’m a TV person, not a Zoom person, but my husband said we’ll make it work.”

The couple retrofitted their dining room to become a cooking studio with lights and cameras. “My husband has been my lucky charm,” Gottlieb Herman said. “My mission to honor my father was not necessarily his mission, but he made it his mission, and Michael is my brilliant number two when it comes to my web design and my graphics and being able to create beautiful designs. You’re looking at a classically trained software developer from Wall Street — probably the smartest brain you’ll ever come in contact with. I can’t build websites. I can’t do graphics. I can’t do videos. Michael handles all that side of it. He has enabled me to be able to get my message out there.”