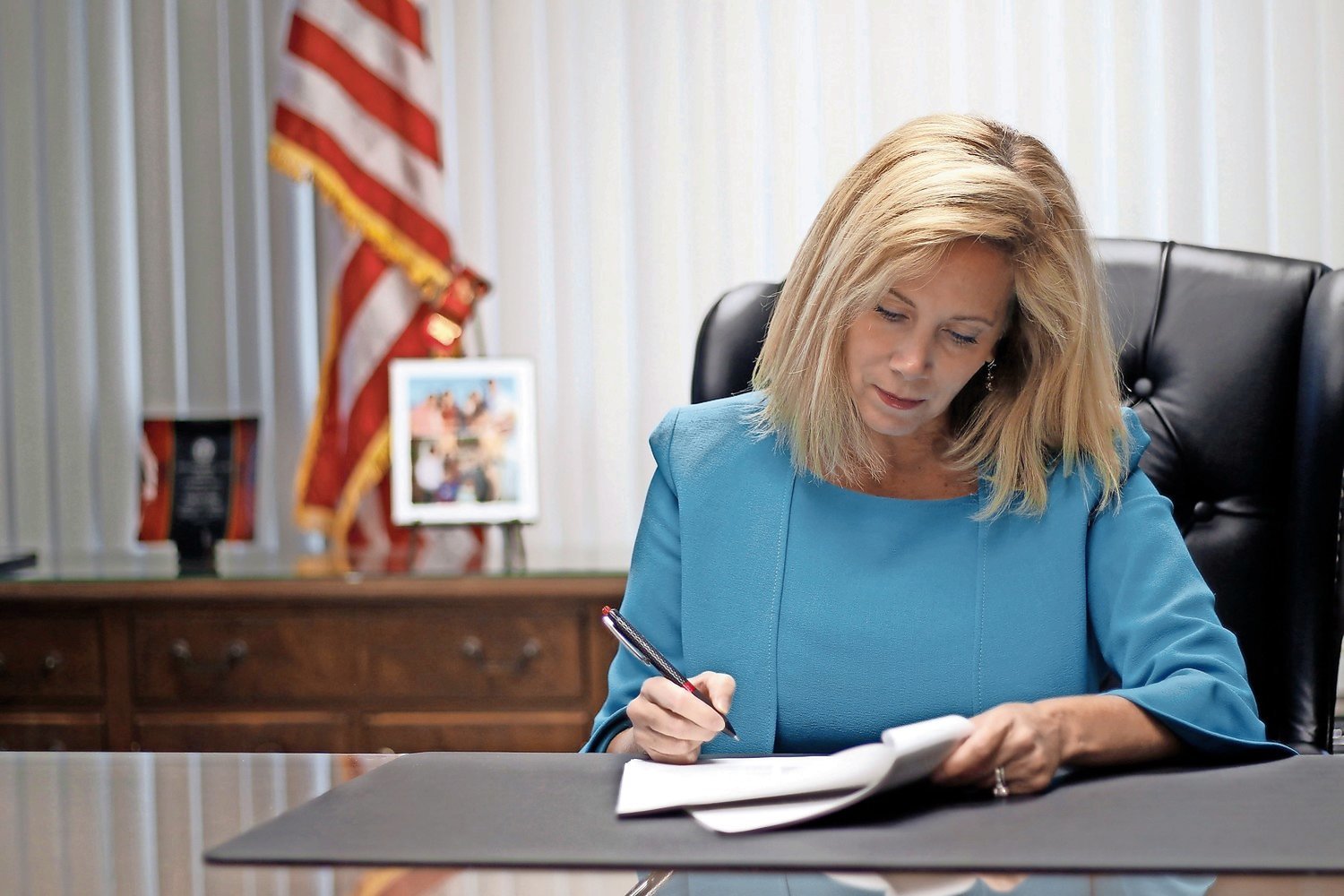 Laura Gillen said that her poll showed that she leads the field by 37 percentage points and would get 47 percent of the vote if the election were held today.
Christina Daly/Herald file photo
By James Bernstein

With less than a week to go before Democrats in the 4th Congressional District go to the polls to chose a candidate for the November election, former Hempstead Town Supervisor Laura Gillen has released a poll showing her considerably ahead of her three opponents in the primary. Those opponents voiced strong doubts about the poll’s accuracy.

Gillen said that her poll showed that she leads the field by 37 percentage points and would get 47 percent of the vote if the election were held today. The poll, she said, showed that her nearest challenger, Nassau County Legislator Carrié Solages, is the choice of 10 percent of voters in the district, which encompasses much of Nassau County’s South Shore, and that Malverne Mayor Keith Corbett has just 5 percent support. The poll did not indicate a number for the fourth candidate in the Democratic primary, Elmont physician Muzibul Huq.

The poll was conducted for Gillen by Impact Research, a national polling and consulting firm that conducted 244 “randomly sampled” interviews in the 4th C.D. between Aug 2 and Aug. 8, with “likely” primary voters. The sampling error was 6.3 percent.

The primary is next Tuesday. The winner will face Hempstead Town Councilman Anthony D’Esposito, a Republican, in the general election in November. All are hoping to replace U.S. Rep. Kathleen Rice, a four-term member of Congress, who is not running for re-election. Rice has endorsed Gillen in the primary.

Gillen’s opponents rejected the results of the poll. Corbett, who became Malverne’s mayor in 2019, said, “Laura Curran was ahead in the polls when she ran against Republican Donald Clavin that same year[Hillary Clinton was supposed to win,” Corbett added. “They both lost. I have been running elections since I was 15 years old. I will defeat Anthony D’Esposito in November.”

“That poll is misleading and untrue,” Solages said. He noted that Gillen conducted a poll in March that showed that she led by 29 points. Since the district was redrawn, Solages added, his numbers have improved, because the 4th C.D. now includes his county legislative district, which is in Elmont.

“One hundred percent of my district is now in the 4th C.D.,” Solages said.  “There is no way I could be so far down” in poll numbers.

“She was supervisor for two years. I’ve been in the Nassau Legislature for 10 years,” he said.

Huq, who has never held political office, also dismissed the results of the poll. “I can poll my wife and son, and they will say they’ll vote for me,” he said. “If she takes a poll of herself, what does it mean? This doesn’t bother me at all.”

The district is heavily Democratic. President Biden carried it by 15 percentage points over former President Donald Trump in 2020.

At a candidates debate two weeks ago, the four largely agreed on a number of issues, including women’s rights and the need to bolster Social Security, improve conditions at veterans hospitals, reduce taxes and cut government bureaucracy. Corbett attacked Gillen, reminding listeners several times she lost the town supervisor’s seat in 2019 election and that she had a political action committee that she needed to disclose to the public.

A Gillen spokesman said earlier this week that she has no PAC.

Gillen brushed aside criticism, and wrote said in an email, “I not only won a race that no other Democrat was willing to take on —becoming the first Democratic Supervisor in the town of Hempstead in over 100 years — but went on to win over Republican town board support by implementing a series of long overdue ethics reforms environmental initiatives and cuts.”