LIPA tax settlement could be decided next week 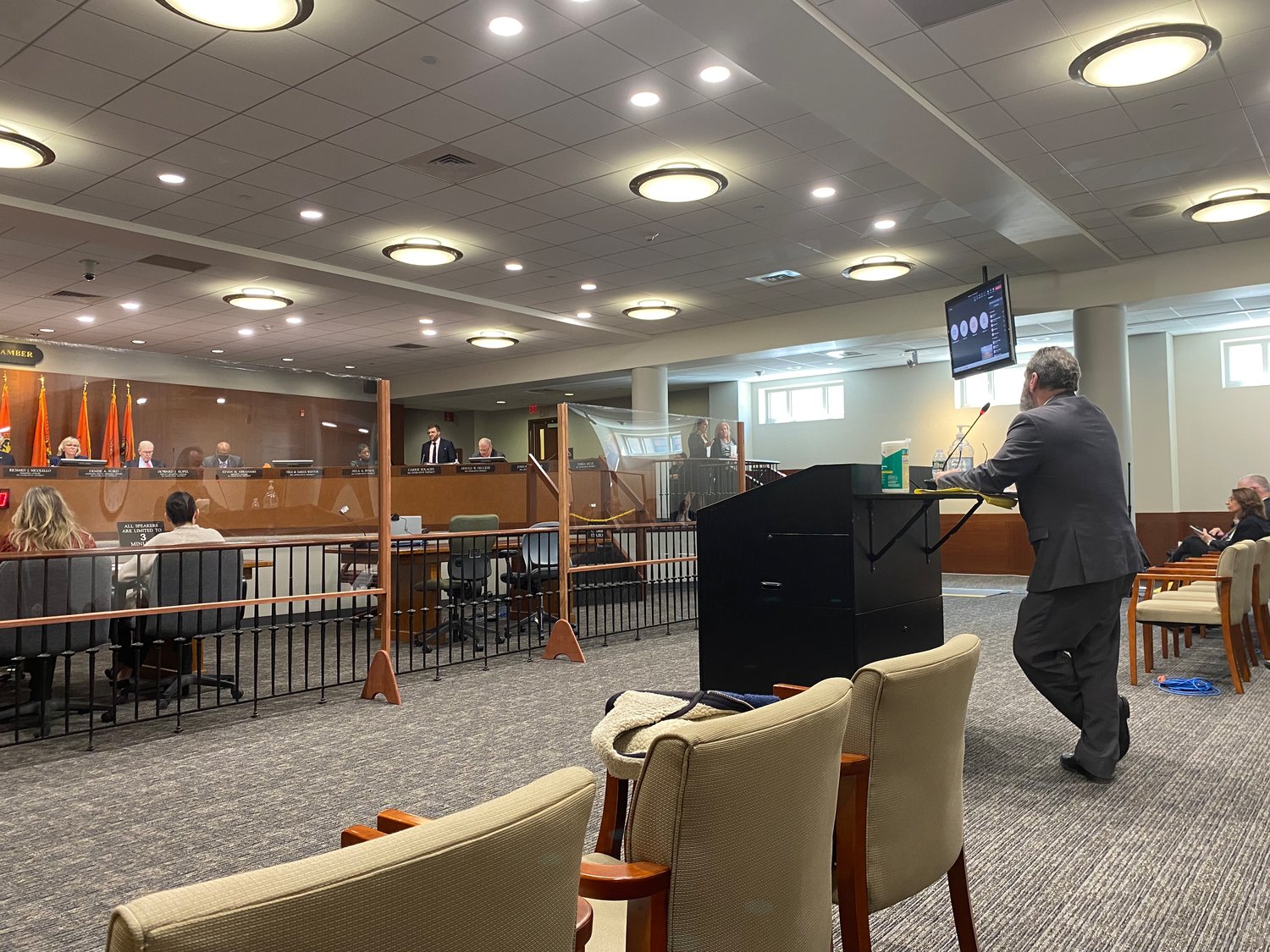 Dan Vincelette, a lawyer representing Nassau County in the tax challenge by the Long Island Power Authority on the E.F. Barrett Power Station in Island Park, speaks in front of the county’s rules and finance committees.
Tom Carrozza/Herald 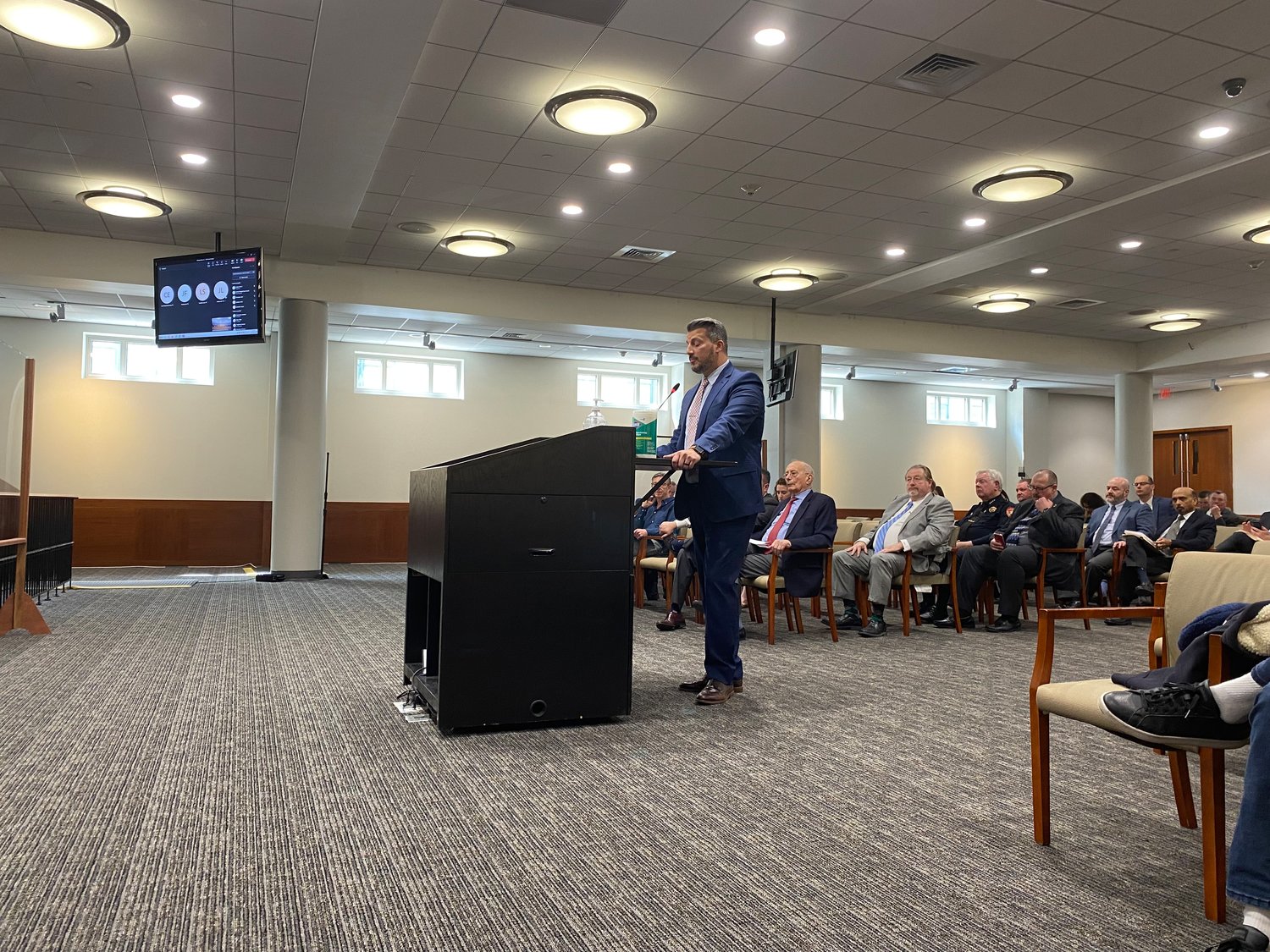 Island Park schools superintendent Vincent Randazzo makes the case that his neighbors would be overtaxed when it comes the school budget if any proposed tax settlement between the Long Island Power Authority and Nassau County is allowed to greatly reduce the utility’s property tax.
Tom Carrozza/Herald
Previous Next

The intention is not to sacrifice the school district and the neighborhood in the hopes of trying to push away a county guarantee.”
Denise Ford, Nassau County Legislator
By Tom Carrozza

It all comes down to a vote.

On Monday, April 25, members of the Nassau County Legislature will gather just after lunch to give either a yea or nay over a dispute that on one side could cost taxpayers significant more money, and on the other, land all parties in front of a state supreme court judge.

Legislators are set to finally decide whether to approve a settlement with the Long Island Power Authority over how its E.F. Barrett Power Station in Island Park is taxed. LIPA say it’s paying way too much. But Island Park officials worry giving the utility a massive tax break will instead shift that burden to homeowners, schools and the library.

Dan Vincelette, who represents Nassau in the dispute, told both the Legislature’s rules and finance committees last week that a settlement forged with County Executive Bruce Blakeman would minimize the Nassau’s liability that might already be an issue if the two parties went to trial as scheduled on May 31.

The bottom line, Vincelette said, is that both LIPA and National Grid — which owns the facility — are challenging the assessed value of its properties, which ranged from $70 million below LIPA’s own appraisal of $299 million, and gradually coming down to $93.5 million in 2019.

Blakeman’s proposed settlement would instead rely on a direct tax assessment, which would incur a specific — and consistent — charge each year. It would ultimately reduce what is currently a $59 million annual tax levy to just $32 million in five years.

Legislator Delia DeRiggi-Whitton, whose district includes Glenwood, worries the Island Park population could face a more substantial tax burden than Glenwood’s $200 increase per month, since $2,400 each year is a bigger chunk of Island Park homes, which generally appraise lower than those in Glenwood.

As part of the proposed settlement, LIPA would waive hundreds of millions in past refund liability for tax years dating back to 2010 when the case began. If it goes to court, the county could not only face billing LIPA far less, but could be on the hook to pay back all those other millions, too.

Legislator Denise Ford stood with DeRiggi-Whitton, however, calling for the Legislature to table the settlement discussion.

“Island Park is scheduled to go up, I’d say, about at least $400 to $450 a month in an increase in their taxes once this is said and done,” she said. “The intention is not to sacrifice the school district and the neighborhood in the hopes of trying to push away a county guarantee.”

Vincent Randazzo, Island Park’s schools superintendent, told legislators his district has been in an uncomfortable position over the power plant since the 1990s — to the point Island Park’s district website has dedicated an entire section to the dispute. The school district would take a significant tax hit if the settlement went through, he said, easily eating into a proposed $34 million school budget for the upcoming fiscal year.

“I will be the one receiving the phone calls from concerned residents, from retirees who are on fixed income asking me to explain to them what this means on their tax bills,” Randazzo said. “I will have to give them the answer that I just simply cannot answer the question.

“It should not be the responsibility of the school district to explain this to the residents of the community. It should be the county and the administration that put this deal together.”

Anthony D’Esposito recalled the devastation he saw during Hurricane Sandy, when he was chief of the Island Park Fire Department.

“I stood out in front of the firehouse and I watched residents of our community walk down Long Beach Road toward the firehouse with everything that they had left in a basket on their heads,” the Town of Hempstead councilman said. “That is the devastation that Island Park has seen, and that devastation will continue.”

The affected areas of Island Park from the settlement serves the greatest number of families that live at or below the poverty line, D’Esposito added, qualifying for free school lunches.

Richard Nicolello, chair of the legislature’s rules committee, believes, however, that LIPA has not acted like a public entity, but instead a private business.

“I think all of us join with you (D’Esposito) and urge LIPA to do the right thing,” the county legislator said. “The Island Park School District — because of its unique background and socio-economic situation, this will have a devastating effect. So, LIPA needs to step up to the table and do the right thing with this community.”

In the end, however, the motions to table the settlement in both committees failed, and Blakeman’s truce with LIPA faces a final vote next week. If the legislature says no, then the county has a date set with Nassau County Supreme Court Justice Vito DeStefano on May 31.