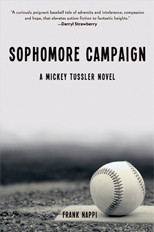 But as he was working on the final edits to the book, more ideas started to come to him, and the seeds for a second book were sown.

The book, “Sophomore Campaign,” continues the story of Nappi’s character Mickey Tussler — a baseball prodigy who suffers from Asperger’s Syndrome, a disorder on the Autism spectrum. Set in the 1940s, Mickey has to overcome not only his disorder, but society as well, to play in the minor leagues.

“In the last book, there’s a championship game that the team — The Brewers — lost, mostly because the main character wasn’t able to play because of some conspiracy that the rival team had concocted,” Nappi explained. “And the implication at the end of the first book is, based on what his mom says, the kid isn’t going to play baseball anymore because it’s just too overwhelming because of his Asperger’s and all of the extraneous things that happened.”

“The Legend of Mickey Tussler” was released and garnered a lot of positive reviews. The book was turned into a television movie staring Dean Cain by Eye in the Sky Entertainment.

“It was well-received from baseball folks, who really liked the baseball aspect of it,” said Nappi. “Which was nice to hear, because I love baseball and I wanted to make sure that it wasn’t something that was too contrived. I was even happier that people in the autism community, and people who just like to read books in general, saw that it was more than a baseball story, and it sort of transcended the baseball jargon and the field.”

The story came to Nappi in two ways: the first was his life-long love of baseball. A player, a coach and an English teacher, Nappi always wanted to write a baseball story.

“I was just missing the proper wrinkle for the story,” said Nappi. “I didn’t want to replicate the age-old story of the prodigy getting discovered and becomes the central part of the team. It’s been done so many times before.”