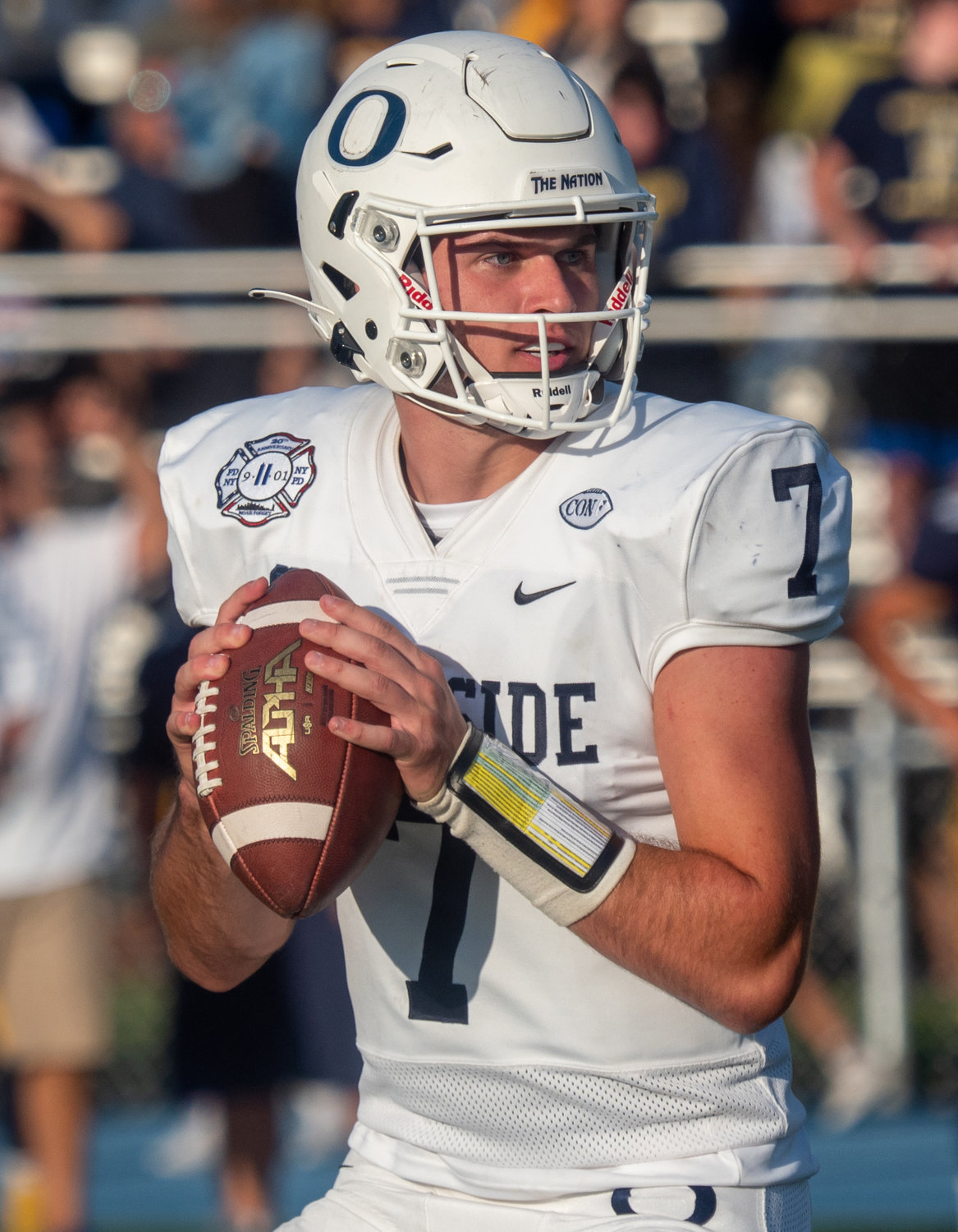 History was made during Oceanside’s 34-13 Conference I football victory against East Meadow last Friday, as senior quarterback Charlie McKee broke the Nassau County career passing record for yards midway through the second quarter. Even though he was aware of the number he needed prior to the game, he said he was not cognizant that he had broken the record until it was announced.
“I didn’t know where I was at yardage wise until the guy said it over the loud speaker,” Mckee said. “Coach [Rob Blount] and I and all off these guys have been through a lot these four years. Having all of my guys there to hype me up afterwards was surreal. I love these guys so it was a great feeling.”
In the first half, the Sailors’ offense was as efficient as can be, as they came away with a touchdown on each of their five possessions. It was a multifaceted aerial attack, as nearly every eligible receiver was utilized in some capacity.
Senior Dan McCormick led the team in both yards and catches, as he finished with 5 catches for 87 yards. Senior Ronnie Kraemer totaled 77 yards and a touchdown on 4 catches. Seniors Michael Mecca and Nick Ebel also had receiving touchdowns. Junior tight end Logan Lyson caught the ball that’s destined for the trophy case, as he was on the receiving end of the 12-yard pass that broke the record.
McKee only played the first half, but finished with 311 yards passing, and also had a 43-yard rushing touchdown on a designed sneak on a fourth-down conversion.


Oceanside’s defensive unit also played admirably, as besides one lengthy run, they were mostly able to stifle East Meadow’s offense. The Sailors forced four punts in the first half, and junior Miles McGann also notched an interception on an overthrown ball down the right sideline.
With the Sailors (6-1) up by 27 at half, they were able to give backups significant playing time in the second half. Blount was very content with the effort and execution they demonstrated. “They work so hard for us and it was great seeing those guys get in and they did a lot of good things,” Blount said.
Junior Andrew Greco and senior Ryan Denni dominated the ball in the second half, as the Sailors did not throw the ball following halftime. The two combined for 62 rushing yards on the first possession of the second half, which resulted in a field goal and effectively burned 8 minutes off of the clock.
For East Meadow, it was simply too little too late. The game seemed destined for a shootout in the early going, as Brian Surless ran for a 42-yard touchdown on a jet sweep to give the visitors the lead in the first quarter. However, the Jets couldn’t sustain drives. They didn’t score again until the fourth quarter, when Nick Longardino went untouched on a 24-yard rushing touchdown.
Oceanside will try to finish the regular season strong in its finale at Freeport this Friday at 6 p.m.