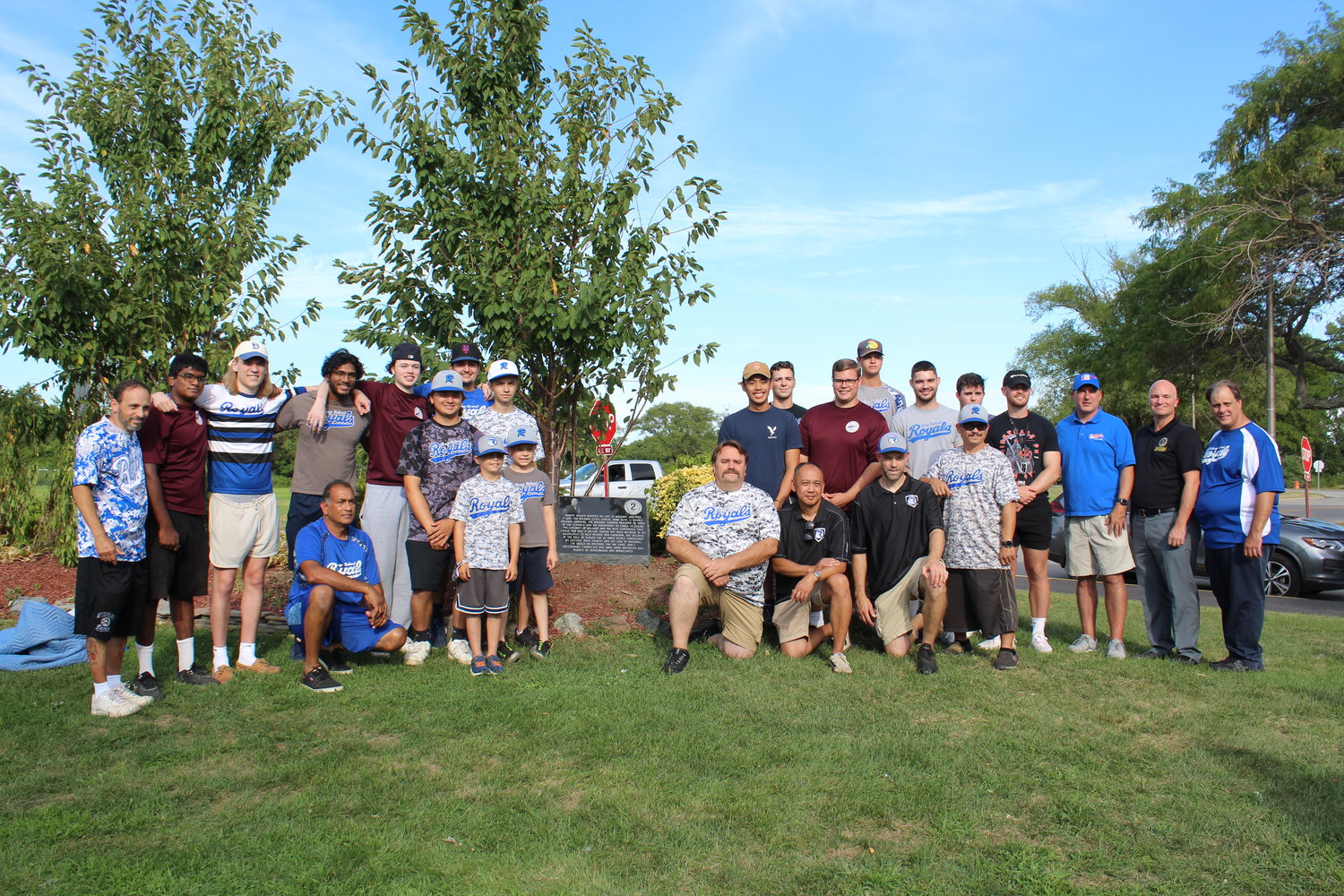 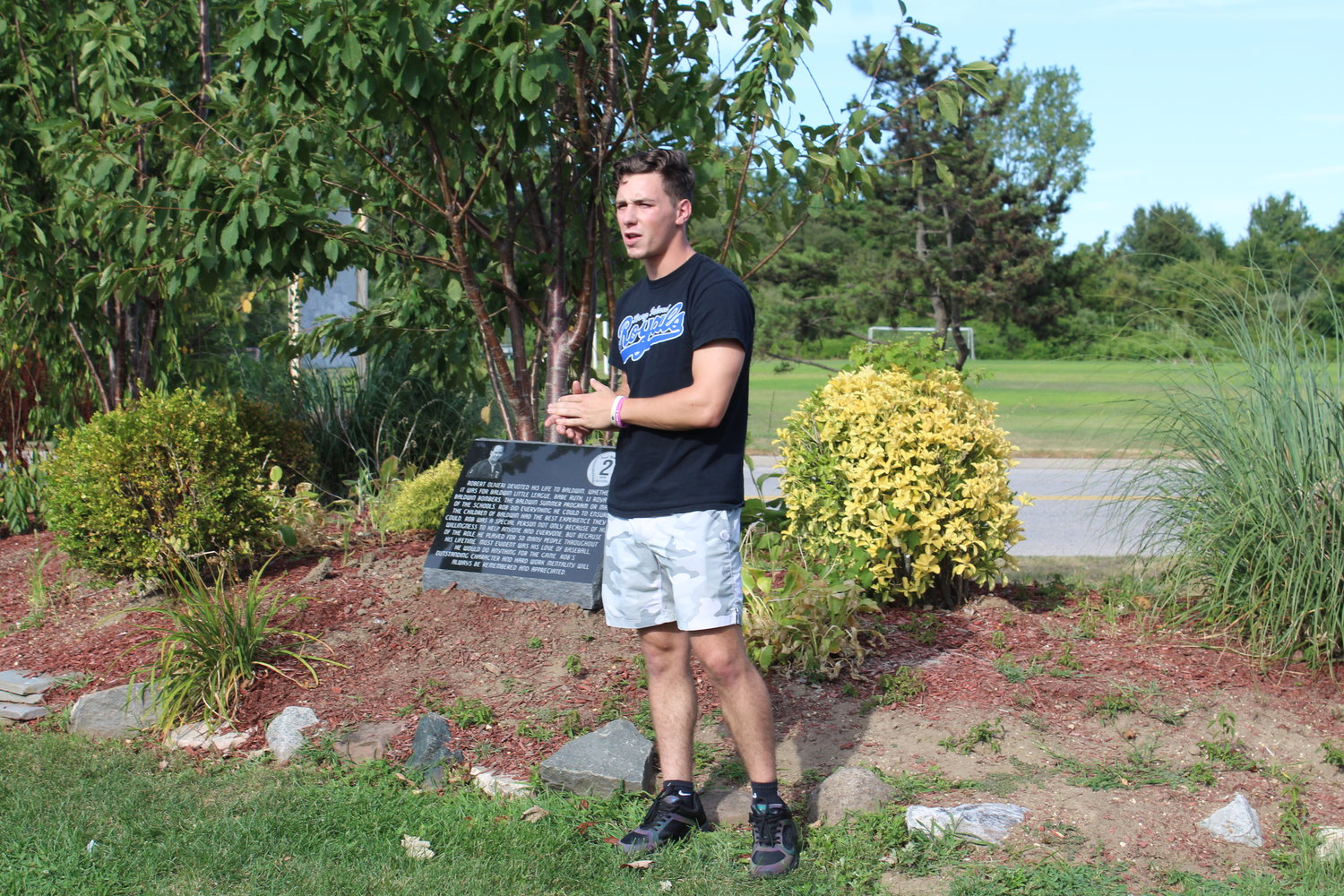 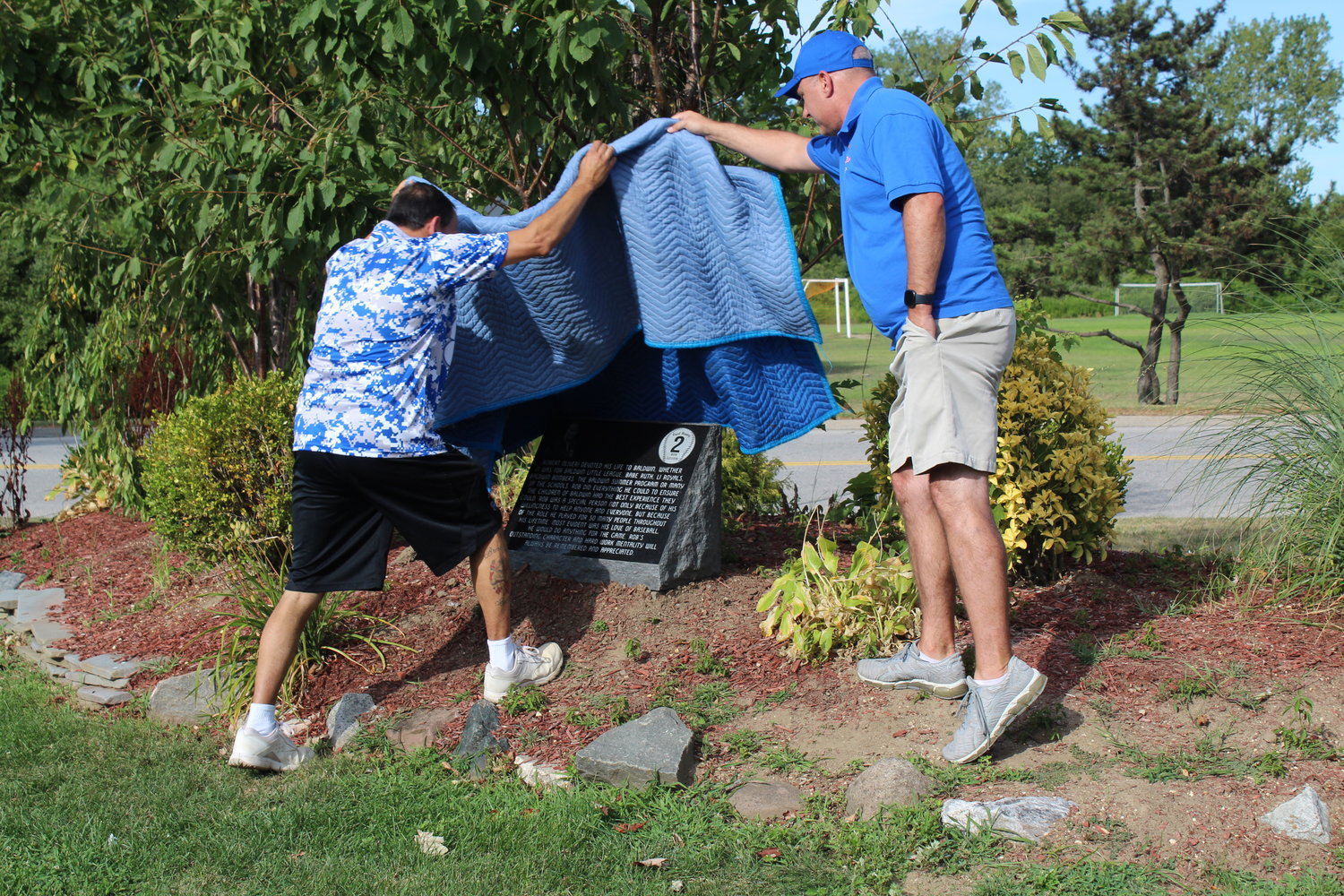 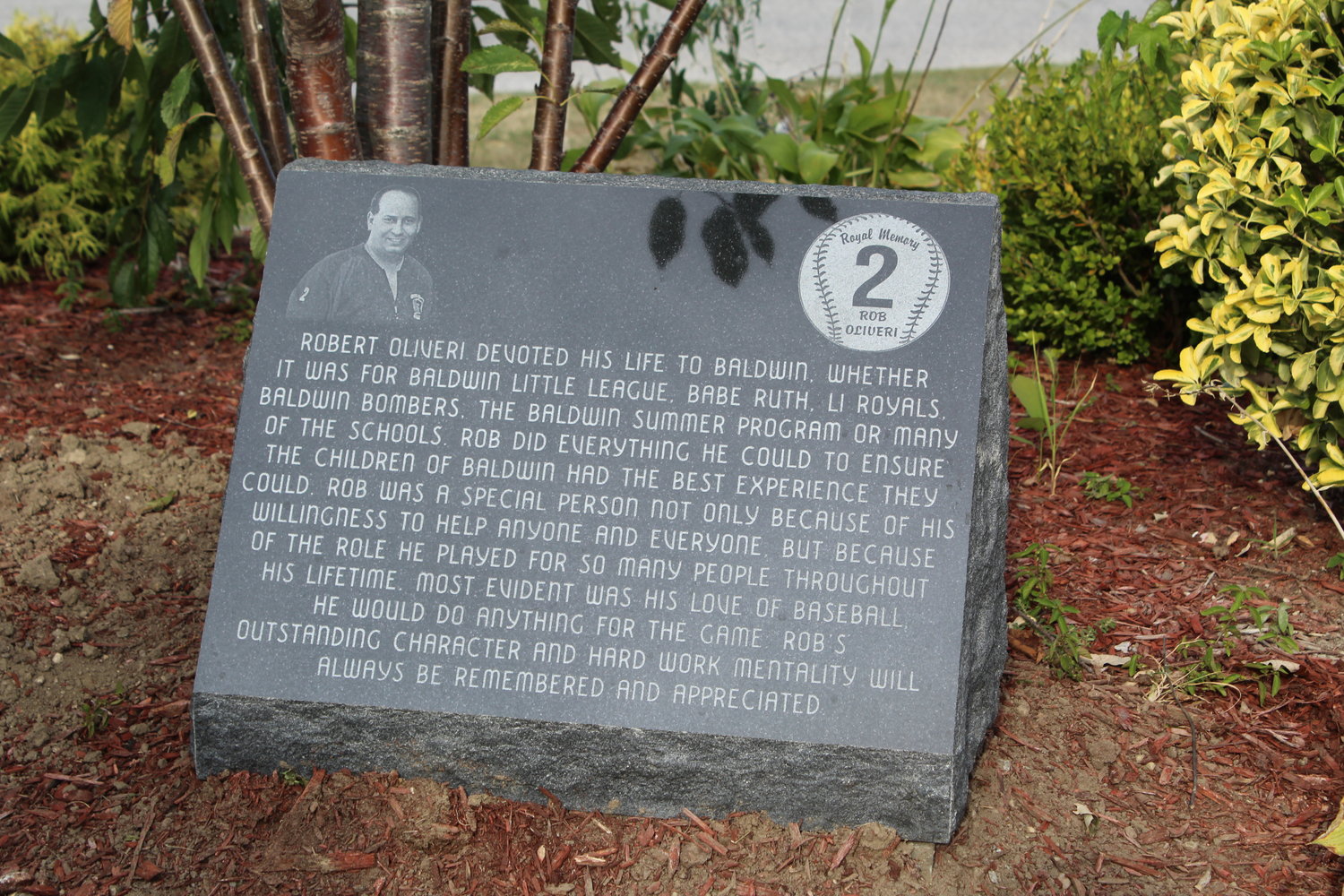 Tribute to a baseball hero Robert Oliveri devoted his life to Baldwin. Whether it was for Baldwin Little League, Babe Ruth, LI Royals, Baldwin Bombers, the Baldwin Summer Program or many of the schools. Rob did everything he could to ensure the children of Baldwin had the best experience they could. Rob was a special person not only because of his willingness to help anyone and everyone. But because of the role he played for so many people throughout his lifetime. Most evident was his love of baseball. He would do anything for the game. Rob’s outstanding character and hard work mentality will always be remembered and appreciated. Words by Christopher Morro”
By Karina Kovac

Robert Oliveri, of Freeport, died suddenly of a heart attack while on the job for the Town of Hempstead sanitation department on May 6, 2019, at just 51.

After his death, the Baldwin baseball community, as well as Oliveri’s friends and family, decided to immortalize the humble man who coached generations of players, and taught them about life as well. Their dream was realized last Friday night at Baldwin Park, with the installation of a plaque honoring him, overlooking the field he loved.

Oliveri was president of the Baldwin Little League, the Baldwin Summer Program and the Long Island Royals, previously known as the Babe Ruth League, among other clubs and organizations. He was born in Bethpage in 1967, but played baseball at Baldwin High School, graduating in 1985. He joined the Baldwin Fire Department in 1986, and was a member of the First Aid Co, working as an emergency medical technician.

The shock of his death shook Baldwin, and in the weeks that followed, there were discussions about creating some type of memorial. Thomas Reilly, president of the Baldwin Little League, said he spoke with the park’s administration about installing something near the baseball field, but then, Reilly said, “Covid set everything back.” A woman in the office, however, “still had his obituary three years later in her permit book.”

Reilly saw that simple gesture as a good thing, and was reminded that a number of people were rooting for the completion of a memorial to Oliveri. “The fact that she’s holding on to his obituary three years later is a pretty good indicator of what kind of person Rob (was),” Reilly said.

When Covid began to recede, Reilly contacted Hempstead Town Councilman Christopher Carini about expediting the process of creating a monument. “I’m very involved in my youth organization, my sports organizations,” said Carini, who lives in Seaford. “I speak regularly to Tom about the program and about permits to make sure they have their seasons up and running.” Although he had never worked with Oliveri, Carini knew how important it was to have a monument installed at the park. “He was involved in every aspect of every everything in Baldwin,” he said of Oliveri, “and this is a great testament to the excellent life that he lived and how many lives he touched.”

The monument, said Christopher Morro, president of the Royals, “was going to get done. It was just a matter of when.” Having worked with Oliveri for decades, Morro knew how much Baldwin Park meant to him. “Rob loved this park — he would do anything, give up anything, to be on the field,” Morro said, “and I wish he was on the field now with me. This is Rob’s Garden,” he added, standing amid flowers and shrubbery next to the monument, “and (the monument faces) the ball field that he loved so dearly.”

For Morro, every day they were together is a favorite memory, for him as well as his son, Christopher, who wrote the inscription on the plaque. “There’s a lot of things we could say about Rob — one of a kind, the greatest person in the world, and would do anything to help out anybody in the community,” “Big” Chris said, adding that “Young” Chris was “involved in Little League since he was 5 years old and he’s 22 now” — with Oliveri there every step of the way until he died, a father figure to many young men in Baldwin.

Young Chris Morro was Oliveri’s right-hand man for five years, helping him with a variety of baseball- and community-related tasks. Oliveri volunteered not only for the baseball teams, but also for district schools — where he would get custom gear for events and take on other tasks — and was on the board of directors of several clubs, and led a number of them, for decades.

“He definitely would have wanted to be remembered, especially for being the heart and soul of this community,” Young Chris said. “It didn’t matter who was in his way or what timeline he needed to get it done in, he always had it done and in the perfect way.” He described Oliveri as nothing less than “the best person that could ever walk the face of this world.”

Oliveri radiated a sense of calm, Young Chris said. “In the most frustrating times he would stand next to you, and you knew everything was going to be OK,” he said, marveling at the small crowd that gathered for the monument unveiling last Friday. “It’s honestly a dream come true to see everybody else come here to celebrate his name and also just (to have) the league continue to thrive.”

Oliveri put in the work, on the field and behind the scenes, to get projects done at the park. He was able to get four new batting cages installed, and Reilly said that the cages, and the monument, will “be here as long as the park is here.”

Elissa Kamerer, who spoke at the event, knew Oliveri for 35 years. “I knew Rob since he was 16 years old,” she recounted. “I was president of the Summer Program — Rob was the director. We were together every day — every day — for 35 years, and I miss him every single day. He was a man for all seasons, (and) everything Rob touched turned gold.”

Kamerer even called Oliveri to ask for help in her personal life, the kind of call he must have gotten frequently. “When my mother passed away, I called Rob,” she recalled. “‘Can you help me move her furniture?’ He came with Young Chris and helped move my mother’s furniture.” Kamerer added, “I loved him like he was my son, my brother. He was a wonderful young man. They don’t make young men like this anymore — there’s no dedication. He was one in a million. We were lucky to have him as long as we had him, but it should have been a lot longer.”