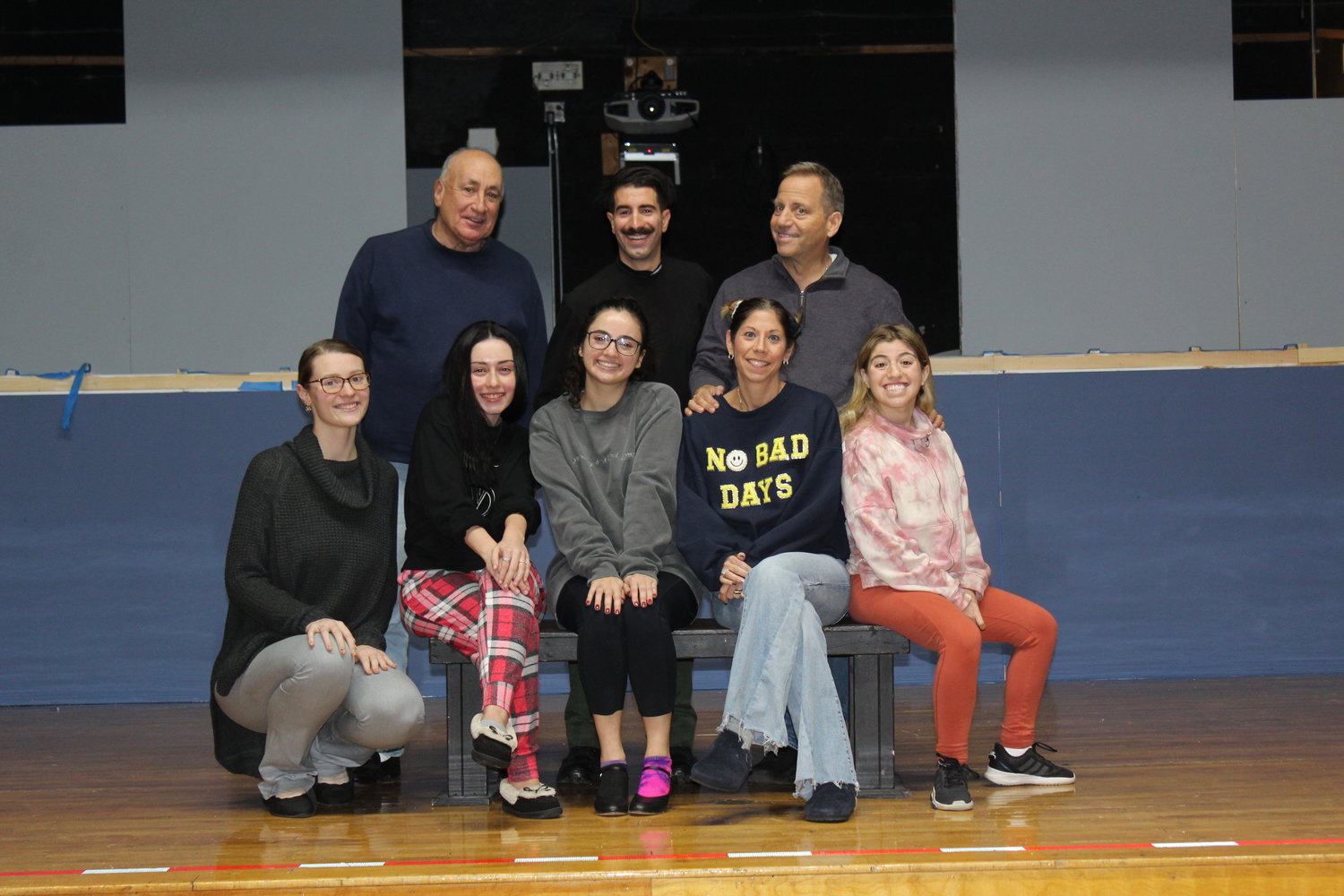 Some of the members of the Theater Guild of Oceanside who will be performing ‘Dames at Sea’ the first weekend in December.
Karina Kovac/Herald 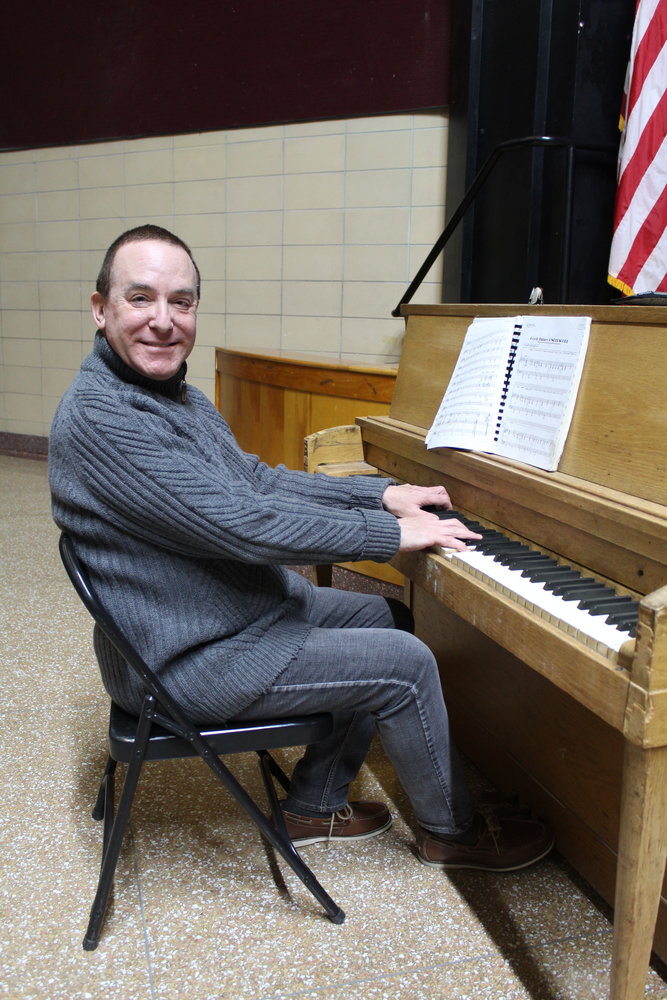 Director Bruce Bider at his piano, which he’ll be playing in the show ‘Dames at Sea.’
Karina Kovac/Herald 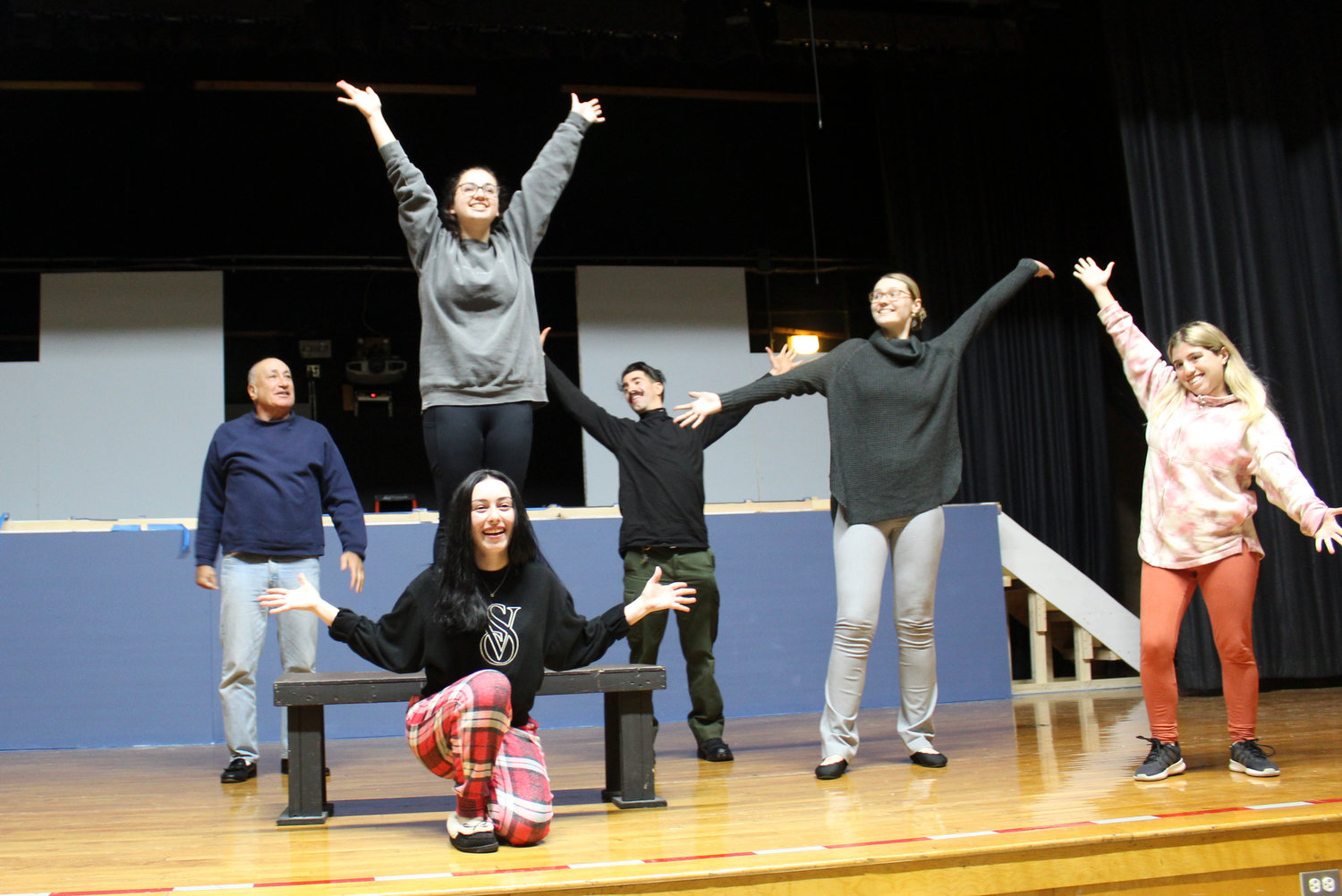 After 25-years the Theater Guild of Oceanside is back with a showing of 'Dames at Sea.'
Karina Kovac/Herald
Previous Next
Showtimes

What’s a performer without a stage? Not very happy. But that’s changed now that the Theater Guild of Oceanside is back after a 25-year hiatus. Starting in the early 1960s with plays, the company branched out into musicals in 1968 with a production of “The Music Man.” After the organization disbanded in 1997, a few dedicated theater lovers are now working to bring the guild back bigger and better than ever.

Its first show, “Dames at Sea,” is a spoof of 1930s movie musicals. It tells the story of a young dancer from Utah who comes to New York with dreams of being on Broadway. But with the Great Depression looming, her plans must change.

The musical’s director, Bruce Bider, has a long history with the guild, “My history of TGO goes back to being a student, sitting in the audience, watching,” he recalled. “I remember the first TGO show I saw was ‘George M.’ in 1975, and I continued watching.” Seeing the magic theater can bring, Bider got involved as a pianist when he was in high school, and then directed some shows in the ’90s before the “group just ran out of steam.”

Bider and Oceanside schools Superintendent Phyllis Harrington started talking last year about bringing the guild back. “Dr. Harrington had the vision last spring to (come back) — I guess she just had her finger on the pulse of what was going on,” Bider recalled, “and she said to me, ‘You know, I think it’s time to bring back TGO,’ and I said, ‘Sign me up.’”

The guild is sentimental to Harrington for numerous reasons, but the most significant is that she met her husband at a show over three decades ago. “I am thrilled that we have been able to revive the Oceanside Theatre Guild as it has been a goal of mine for many years,” she wrote in an email. “Community theatre is a wonderful way to bring people of all ages together to enjoy the magic of live theatre. I personally have extremely fond memories of the Oceanside Theater Guild as it is the place I met my husband over 30 years ago in a guild production of Cabaret.”

“Dames,” which will be performed Dec. 3 and 4, is a “Valentine to the movie musicals of the 1930s,” Bider said, “and to get people into character, I passed around some of my DVDs that this show is based on, like ’42nd Street,’ ‘Gold Diggers of 1933,’ ‘Footlight Parade’ — the 1920s Warner Brothers backstage musicals, they’re known as.”

To get into character, Bider borrows from his predecessor, Sally Buckstone, the original director of the guild. When he was in high school, Buckstone pushed Bider to explore his characters deeper by asking probing questions about their relationships to other characters and their motivations. “That always stuck with me,” he said, “so when I started directing, that was one of the tools of the trade that I kept.”

One member of the cast, Kasey Ziff, is following in her children’s footsteps. One is a sophomore at the high school and another is at Elementary School No. 3, and Ziff said they both “had the opportunity and pleasure to work with Mr. Bider” before she did. With her husband playing bass for the show and one of her daughters helping build the set, Ziff said she was appreciative of the relationships she’s forged with her castmates.

“I think one of the things that has made it such an incredible experience, and has actually brought more of my character to life, is just getting to spend time with everybody here and getting to know everybody here,” she said. “The more close and comfortable we become with each other, the easier it is for us to jump into those characters.”

Ed and Julia Sollinger are a father-and-daughter combo performing together once again. “We’ve done a few shows together,” Ed said.

“But this is the first time in the theater guild,” Julia added.

Performing together, her father said, “is so amazing, I can’t say enough about it. Plus all my family comes to see it. It’s just been great to be able to share that. It’s the best bonding experience.”

In addition to their twice-weekly rehearsals, the cast gathers outside the theater to do in-depth character studies. Bider says he hasn’t seen this level of commitment in a long time. “I have never, ever seen a cast as sacrificial of their own time,” he said. “Beyond what I asked for, they get together on Sundays without me, to practice.”

Casting took place in August, with roughly 16 interested actors vying for the roles and nine getting them. Rehearsals started after Labor Day. The beauty of “Dames,” Bider says, is how flexible the musical is.

“I knew that no matter how large or small a turnout we had at auditions, we could work with it,” he said, “and it’s also a very doable show because there are only two main scenes in it. So I thought it was a good comeback show to start off with,” he said.

It’s also a comeback for one actor in particular — Jeff Gedacht, who has a history with Bider, having preformed in some of his previous shows. Gedacht found out about the return on Facebook, and immediately wanted to try out.

“I said, ‘I think you listed up to 40 years old, (but) I’m 42,’” he recounted, “so I contacted Bruce, and he said, ‘Why don’t you come down? There’s an outside chance that we’re going to put additional roles in the show.’ And I must say, I’m very fortunate, because I have a very nice part, and I’m hoping to get a lot of laughs.”

“I would want to add that I’ve been doing community theater maybe 15 years now, but it never ceases to amaze me the amount of talent that’s out there,” Gedacht said. “There are so many great people that have regular professions that you know, that have the talent to be on Broadway or close to it. It’s just a great value for people to get out. It’s not expensive, it’s local, you don’t have to kill yourself to go into the city. It’s really terrific.”

Another cast member who doubles as the show’s choreographer, Rebecca Richter, has also worked with Bider: He directed a musical in which she performed in 2018. “Since then I haven’t performed on stage,” Richter said, “and then Mr. Bider reached out to me about the show and choreographing it, because I helped choreograph a lot of the numbers in the musicals at the high school. It’s been exciting to come back and be on the stage and make my return.”

Actor Michael Ruggiere, who lives in Brightwaters, in Suffolk County, commutes to Oceanside for the opportunity to be in the guild, saying he fell in love with the process of being a performer. “Performance serves two purposes,” he said. “One is creative, and their interpretation of the script and the analysis of it, and the second role is as anthropologists, and all the research.

“It’s safe to say that performers are doctors of humanity in a certain way,” Ruggiere added, his voice filling with passion as he talked. “With this show in particular, I love the fact that it’s a spoof of the 1930s musical comedies, because there are so many reference points to go by. It’s also interesting to see how movie musicals were made at that time, and how it’s translated now, because at the time it’s innovative, and what you can do with it now, you’re seeing it in living color.”

The “lady behind the scenes, driving the car,” Bider joked, is Producer Maria Bavaro, who is active in Oceanside’s Department of Community Activities. The guild is one of the department’s programs.

Bavaro said she appreciates the passion everyone in the show has when it comes to bringing the theater guild back bigger and better. “And to not only shine on the stage, but kind of shine in general to the community and say, ‘Look what we can do — look what we can do when you get us all together,’” she said. “It’s not only an opportunity for the actors to shine, and everyone to shine, but (for) the community to come out and see what everyone is capable of.”

Bider added that the show is family-friendly and for any age demographic. “It gives us a platform to perform, to create,” she said, “and it’s a wonderful entertainment resource to the community and a wonderful outing for the whole family.”