A thank you, by way of a jar filled with joy 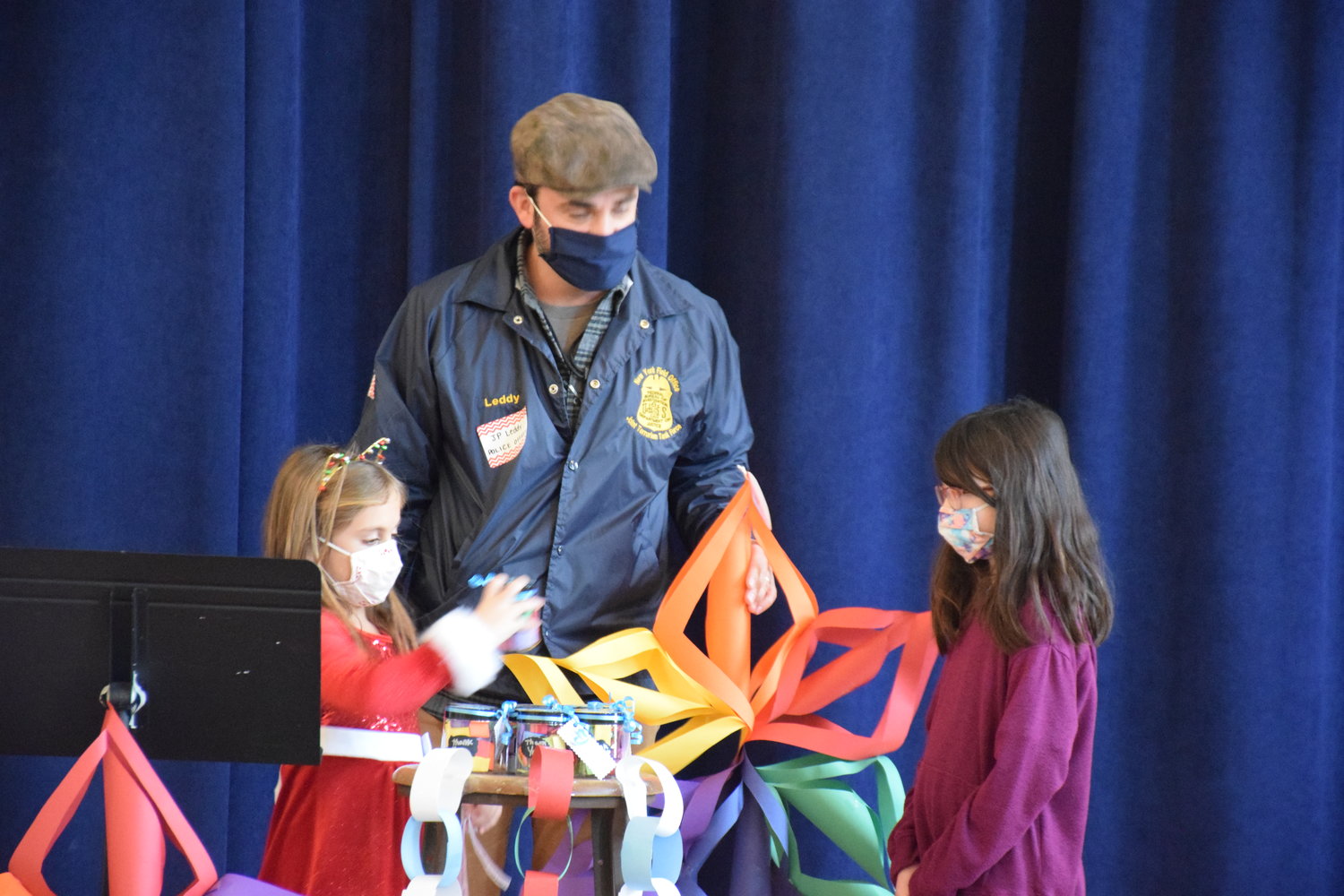 Harper Leddy, left, and Zoe Bamba presented a jar of hope to JP Leddy.
Courtesy LVCSD
By Will Sheeline

The holiday season is a time of hustle and bustle, buying and wrapping presents, and organizing and reorganizing. So, it can be easy to forget the real meaning of the holidays — that giving back is just as important as getting.

The fifth and second graders at Bayville Intermediate School learned of the importance of giving back. On Dec. 17, they shared their holiday spirit by giving “Jars of Joy,” which they made, to frontline workers. The small glass jars contained notes of support, written by students.

“They’re to cheer the workers up,” Tripp Ricketts, a fifth grader, explained. “Like, I wrote, ‘You’re incredible.’”

The students also made multicolored paper snowflakes, with each color representing a different trait. For example, blue symbolized companionship, to remind the frontline workers that their work is important to the community.

This isn’t the first time Bayville Intermediate’s fifth and second graders have worked together.

“For the last four years … every month we have ‘Character Program,’” explained second grade teacher Dani Schatz. “Fifth grade students come and teach my kids about a specific character trait each month. For example, November is gratitude, December is always generosity, and how we can give back during the holiday season.”

According to Kelly Price, a fifth grade teacher, the goal is to teach children that it’s the giving season but what you give is not only gifts.

“[Also] how kind gestures will really mean a lot to someone else,” she said. “That’s why we decided to honor frontline workers, especially with Covid still going on. They need to be reminded that there’s other people thinking of them and cheering them on. ”

Although the teachers came up with the idea to give back to frontline workers, it was the students who made it personal.

“Kelly’s kids, the fifth graders, were the ones who came up with the idea to give words of encouragement,” Schatz said. “So, we decided to make these Jars of Joy to put in nurses’ stations, police precincts, fire stations, and the classes came together to write them.”

While Schatz’s class was deciding when to give out the jars one student asked if one could be given to her father, a police officer. “And that’s what sparked the idea of inviting the frontline workers in,” Schatz said, “and thanking them in person.”

The two classes waited in the school’s auditorium for the guests of honor to arrive. If a frontline worker was a relative, the student led them to their front-row seat. Among them were policemen, emergency medical technicians, firefighters, doctors and nurses.

Then the students, who went onstage in groups of two or three, read portions of a speech thanking the frontline workers for their efforts.

“We hope you feel inspired to keep on going, you got this,” Ashley Grassi, a second grader said.

Then the students asked the first responders to come up to the stage, to receive a jar and a snowflake to take back to their hospitals, fire stations and precincts.

“[This] means a lot, as a firefighter, but especially as a former cop,” said Ronnie Bagan, a retired police medic supervisor. “You don’t really see a lot of positive shows of support for [first responders] at the moment, and it’s really meaningful.”

Nicholas Bartolotto, a physical therapist at Plainview Hospital, also said it was nice to be recognized, especially around the holidays.

“It makes all of us proud and reminds us how important our work is,” he said. “It seems the students really learned a great lesson about the importance of giving this past holiday season.”