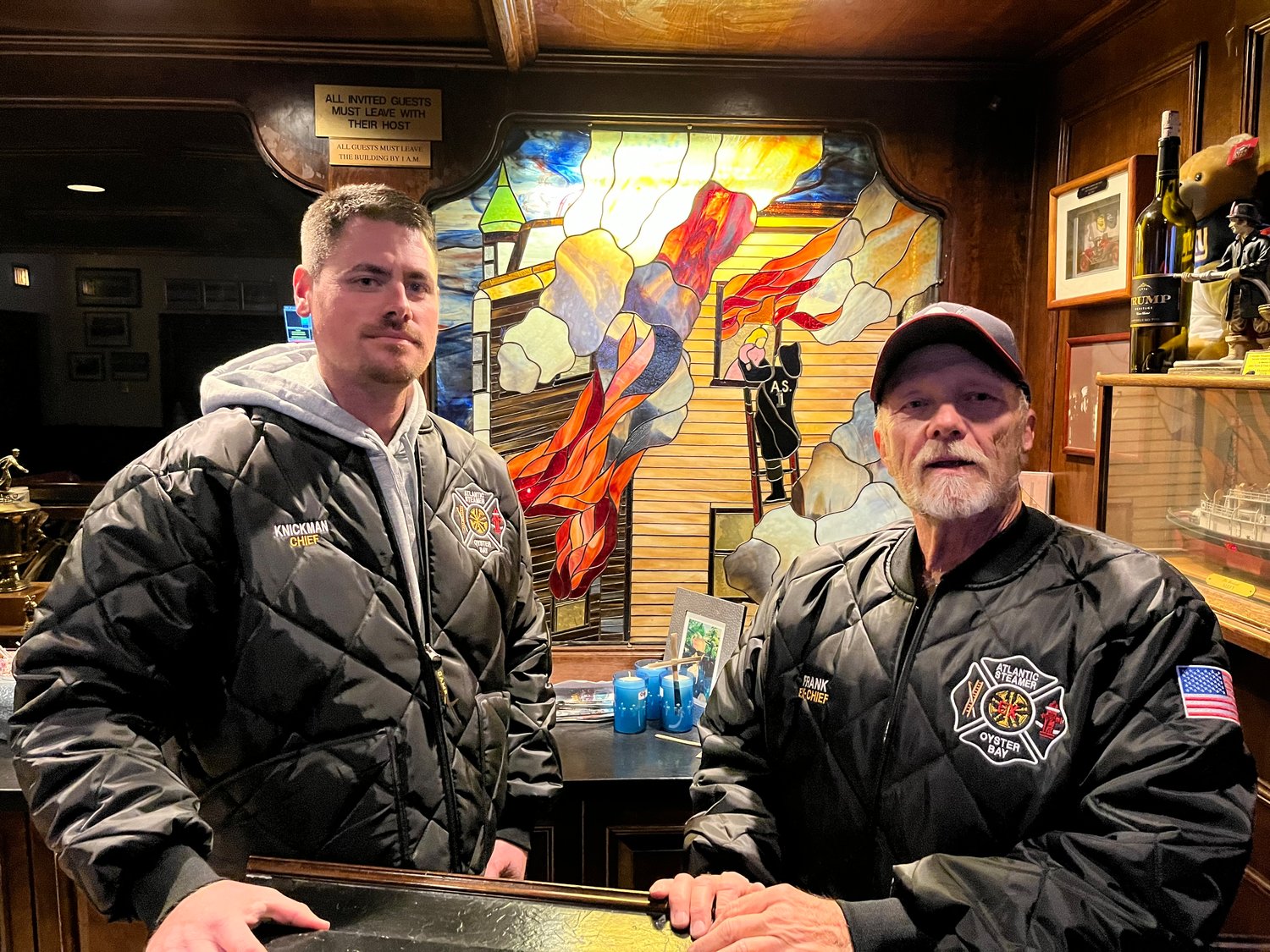 Chief Rob Knickman, left, and ex-chief Frank Ozol walked through the firehouse, pointing out the state-of-the-art gear and trucks, as well as their bar and rec room.
Will Sheeline/Herald 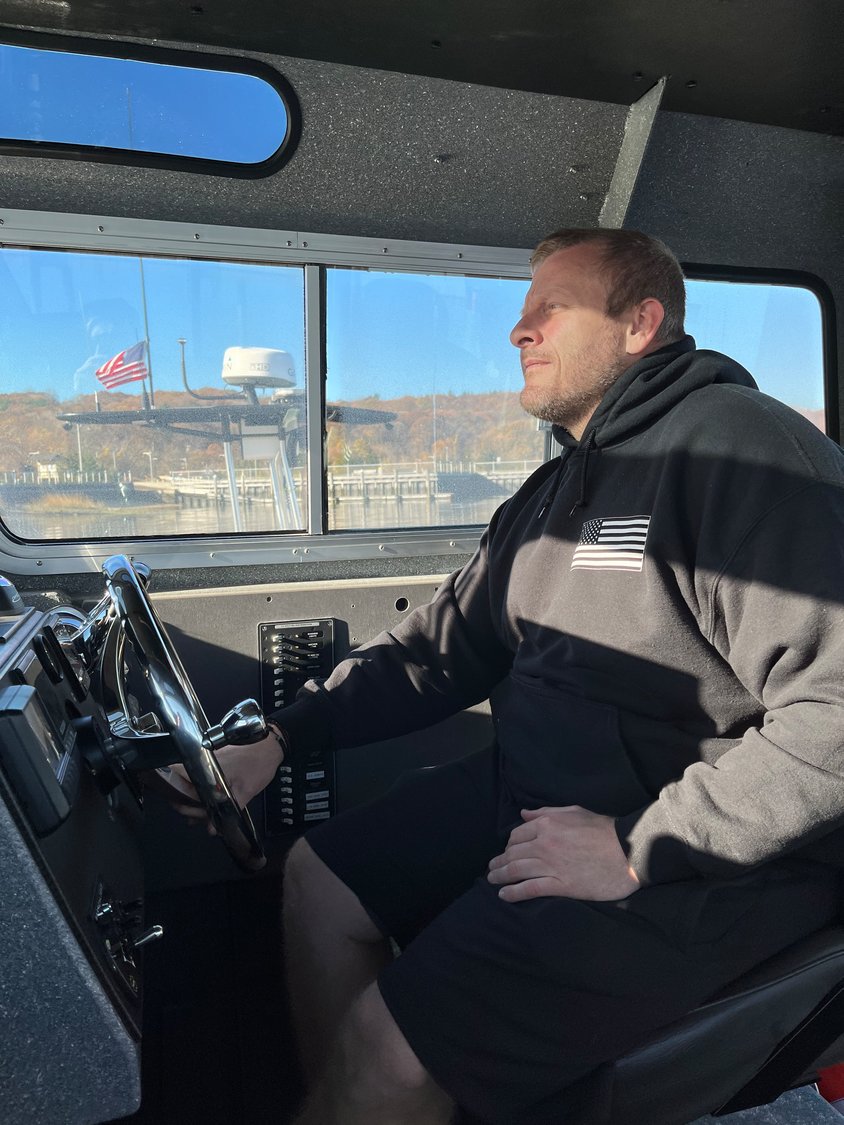 Patrick Graba, a 17-year firefighter, is one of the fire boat captains in addition to being a regular firefighter and former EMT.
Will Sheeline/Herald
Previous Next

Since 1736, when Benjamin Franklin created the first volunteer fire department in America, firefighters have had a special place in the country’s cultural consciousness. The image of mustached men sliding down a pole in the firehouse to save the day while alarms blare and Dalmatians bark is ingrained in the mind of every American child at a young age.

Atlantic Steamer Fire Company 1 is one of two firehouses in the hamlet of Oyster Bay, working at all hours of the day to keep residents safe from everything from fires to collapsed buildings, as well as overturned boats and fisherman caught in the mud at low tide. Now, however, they are experiencing, as are other firehouses across the country, a marked decline in membership, which could seriously impact the hamlet.

“It’s just getting tough to get new members,” explained Frank Ozol, an ex-chief and 46-year Oyster Bay firefighter. “But it’s not just us. Nobody’s joining the rotary or the Lions club or anything else.”

This is due to a variety of reasons, firefighters say, from the high cost of living in the community to the coronavirus pandemic. This has led to concerns in the firehouse that in the next few decades the need for firefighters is going increase, as more retire and die and fewer new members come to take their place.

Atlantic Steamer has been there for Oyster Bay since 1890, working with their brothers-in-arms over at Oyster Bay Company Number 1, who were founded only two years earlier.

During that time, thousands of firefighters have walked through the doors, some because members of their family had been firefighters, while others joined on a friend’s recommendation. For some, like ex-captain and 25-year firefighter Antonio Ruiz, the call to action came out of the blue.

When a woman was injured outside of Snouder’s Drug Store, the firefighters, while they were trying to help her, realized she didn’t speak English, Ozol called out to the crowd that had gathered to ask if anyone was bilingual. Ruiz stepped up to help and that was when he realized that by working as a firefighter, he could do a lot of good for his community.

“That’s what really motivated me. I realized I could do something about it,” Ruiz explained. “I said I might as well join, and here I am 25 years later.”

The firehouse also operates on the water from their boathouse, where they can use their two fireboats to reach any location in the harbor in minutes. They even have their own dive team, trained in scuba and underwater search and rescue at the fire company’s expense.

Atlantic Steamer has worked to make sure that their volunteers are comfortable and can relax in-between calls. In addition to their fully stocked bar and kitchen, they’ve even set up several TV’s and Xboxes to help attract younger members.

In addition, they’ve tried to develop a social media presence, from opening Atlantic Steamer Facebook, Instagram, and even TikTok accounts to increase their exposure to the younger generation. They’re also working on developing a new website.

Despite this, their numbers, like that of so many other volunteer organizations in the community, are dropping, and if the younger generation doesn’t take a bigger interest soon, there could be serious repercussions for everyone in the hamlet.

“Everyone’s getting older, and the problem is there’s not any young guys coming in behind us,” Chief Rob Knickman asserted. “Ten, 20 years down the line, that’s where we’re gonna have a serious problem.”