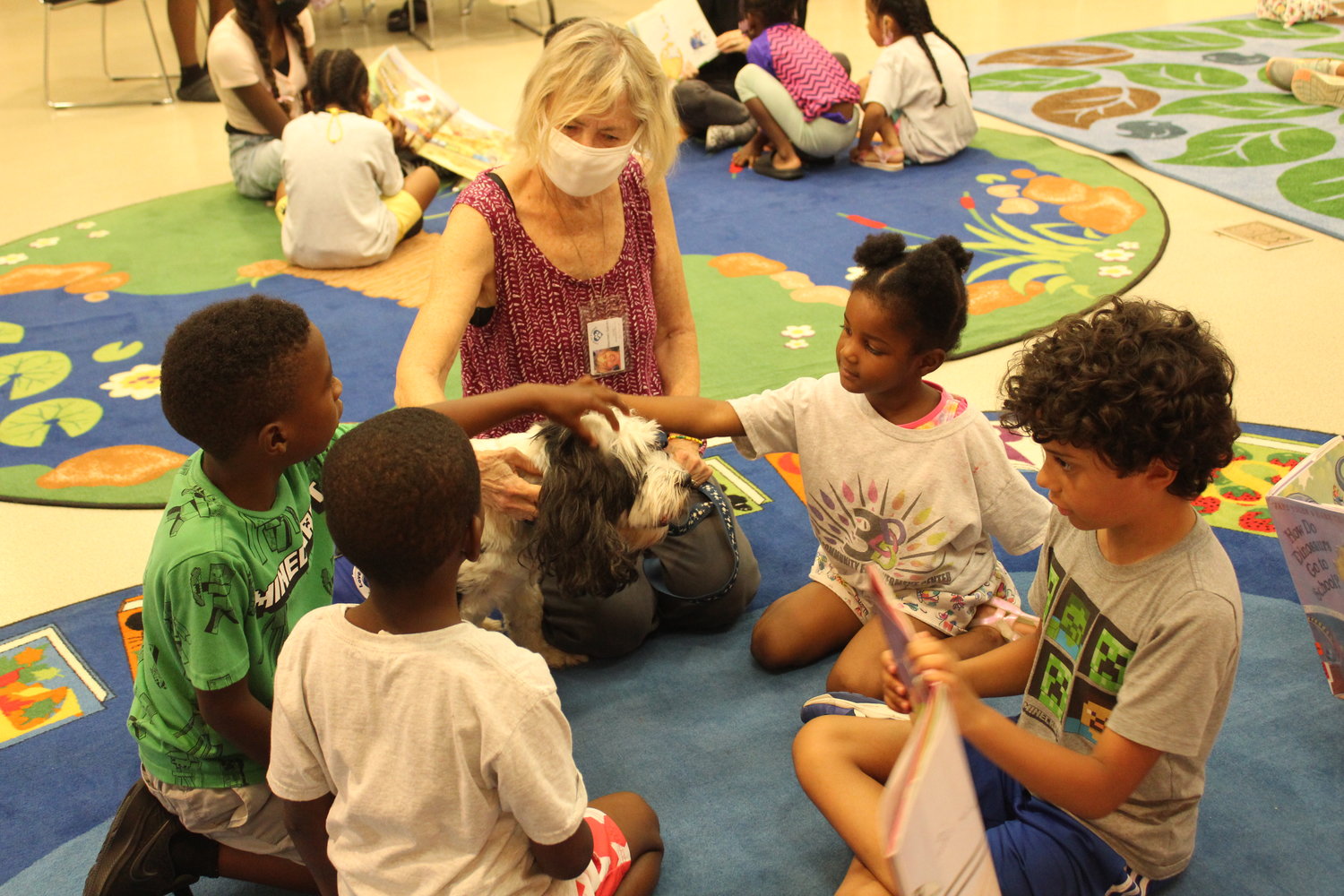 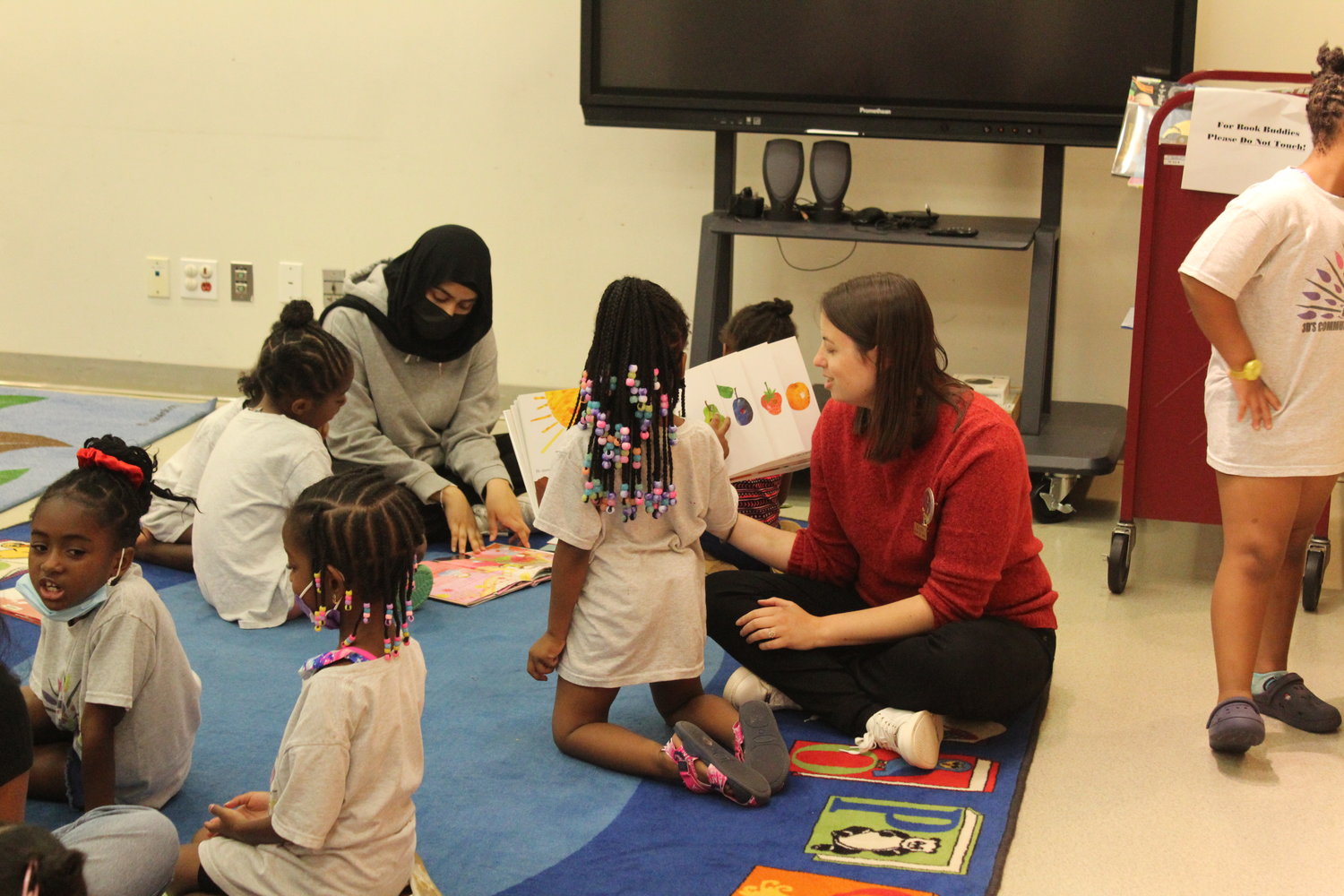 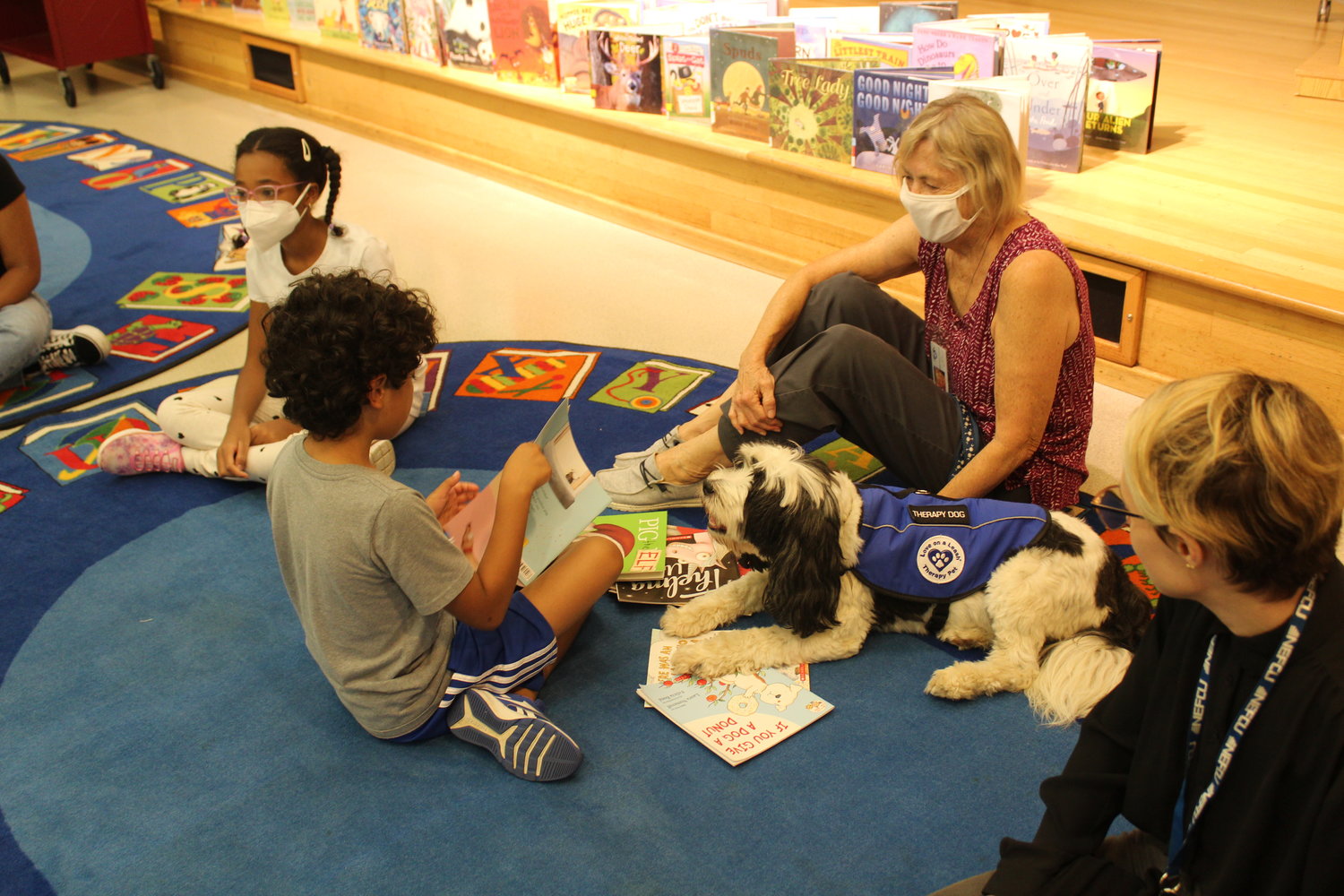 Aiden Lopez, 9, reads to Eli and his owners Martha and Maureen Garvey.
Karina Kovac/ Herald
Previous Next
By Karina Kovac

The Baldwin Public Library is known for its vast number of books, audiobooks and programs for all ages, but on Tuesday the star of the show was Eli, a six-year-old Tibetian terrier therapy and service dog. Making a visit during the children’s “Book Buddies” program where teenage volunteers help younger kids practice their literacy skills, Eli provided additional support as a patient, judgment-free and calming presence.

Maureen Garvey, the owner of Eli, says the kids can’t give him too much attention, “He loves the attention because here, he’s the only dog,” she said. Eli at home wears a different vest as a service dog for Maureen’s husband who suffers from post-traumatic stress disorder from his time overseas in Vietnam. Passing that test to be a service dog, Eli, in addition got his certification as a therapy dog, and is affiliated with Canine Good Citizen and Love on a Lease, two therapy dog organizations.

Eli, the Tibetan terrier puts his charm and patience to use at the library and other locations like senior homes. “They go to nursing homes, but he was sick last summer so now he’s easing his was back in with this his first big step back,” Garvey said. Working wonders with the kids, Eli is good with the introverted and extroverted alike, “He’s mets kids where it’s hard for them to calm down and he will sit there and it won’t bother him if they’re overly petting him, you can’t pet this dog too much, and he’s patient, he won’t’ get annoyed if they’re taking a while.”

Another attendee with patience was 17-year-old teen volunteer Safwah Thajudheen, who is an incoming senior at Baldwin High School and has been coming to these programs two summers in a row. Coming to practice interacting with children- something she’ll need to get used to since she wants to be a pursue being a teacher in the future, she says she, “Really like(s) doing these programs, it’s a nice way to volunteer and talk to kids see them.”

Interacting with the kids ages three and up helps with acclimating to what it will be like to teach, even though Thajudheen hopes to teach older kids. She was remarkably delighted about the kids’ reactions at the event and their want to read and learn, “I’m surprised they’re so excited,” she said.

“I remember I did little things at the library because your parents make you go so sometimes, I’m worried they’re here because they had to be, but they actually really enjoy it, and they pick out the books and get see the dog,” Thajudheen said. Their giddy reactions show just how engaged they are with what they’re reading.  “Sometimes they know how to read, and they’ll point out words and I get to ask questions,” she said.

Another program similar called “Reading to the Dog” was a highlight in the past, but when Covid-19 struck, Eli and another therapy dog that came to the library had to wait it out at their doghouse. Martha Garvey, a librarian at BPL said it’s nice when the dogs do come around, “it calms the kids down and they get exposed to animals, which is nice.”

Mariel DePlama, the teen librarian said the interaction between the older and younger kids reading helps to continue a cycle of giving back at the library, “It’s to get them to connect with the older kids for community service and they come back to the library for the interaction and telling stories,” she said.

Although only 9-years-old Aiden Lopez is one of the children who we’re previously read to but now enjoy reading to others his age, and of course, Eli. Linda, Aiden’s mother, said they’ve both been coming to the library since they moved to Baldwin nine years ago.

“He started around one or two, and he’s been attending all their programs and it’s been great exposure for him, he loves it so much,” she said of Aiden. “I have a picture of him where the kids are reading to him, and now he asked if he could read and now, he’s already giving back. It’s like a giving exchange.”