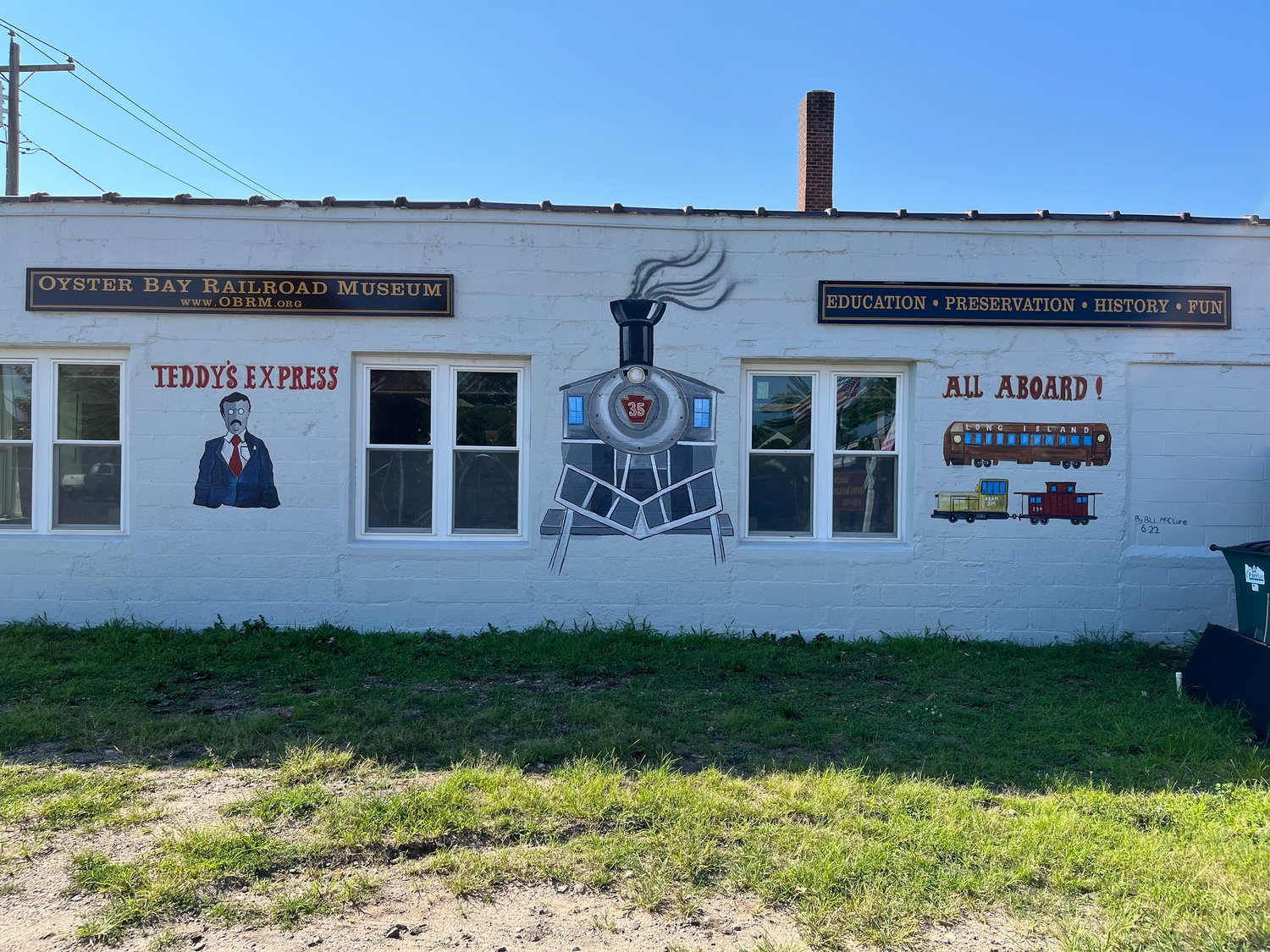 The Oyster Bay Railroad Museum’s new mural took six visits by artist Bill McClure to complete. It was created with a cartoonish style for children and adults to appreciate.
Will Sheeline/Herald
By Will Sheeline

The Oyster Bay Railroad Museum has unveiled a new mural on the side of a building by the entrance to the rail yard. The mural, which features paintings of trains and Theodore Roosevelt, has been several years in the making, and highlights not just the Railroad Museum, but the great historical legacy which makes Oyster Bay so unique.
The project was first formulated back in 2018, when the museum’s board of directors’ Education Committee was discussing ways to improve the rail yard entrance’s appearance. The entrance abutted a building owned by Duke Supply, an electrical supplies company, the side of which had become a bit of an eye sore over the years, according to John Lavelle, a member of the Education Committee, board of directors and the mural project head.
Lavelle said that while crossing the bridge into Bayville one day, he noticed a mural on a wall and realized a similar beautification project could be just what the Railroad Museum needed to spice up their railway’s entrance.
“We talked about how that would be a nice thing for the museum, because it was a very unattractive entry to the museum the way it was,” Lavelle said. “The wall was in a state of disrepair, it was like a corner of a garbage cart. Now it attracts attention; it’s beautiful.”
Although the Covid pandemic put the project on hold, part of the delay also came from the struggle to find an artist who could paint the mural without breaking the museum’s budget. Bill Burke, chairman of the Education Committee, mentioned that they had interviewed several local artists, all of whom cited prices that were beyond what the museum was willing to pay for the project.


Then one day last summer, while Burke was heading into Pietro’s Brick Oven Pizzeria by the Speedway in the hamlet, he was struck by the painting on the side of the restaurant’s window. Speaking to the owners, he got the name of the artist who had painted it, and after reaching out and speaking to him, Burke realized they had found their man in the form of Bill McClure of Glendale, in Queens.
Burke presented McClure with a sketch of what the museum was imagining the mural might look like, which would highlight both the hamlet’s unique relationship with Teddy Roosevelt as well as the historical legacy of the Railroad Museum and the Long Island Rail Road system itself.
“We had a rough idea of what we wanted, you know, and gave him an idea, and then he executed it based on his final vision,” Burke pointed out. “We wanted the paintings not to look like fine art, but to look like something maybe a high school person would do and would appeal to kids. I wouldn’t say it was a cartoon, but cartoon-ish.”
McClure, who has been an artist for roughly the last 30 years, mentioned he was interested in the project because of its historical nature, although before he could even begin workers had to hose down and prime the wall. After the wall was ready, McClure made around six trips to Oyster Bay to paint the various sections. When it was completed, he and the Education Committee were very pleased with the result.
“This was such an interesting project because we got to do something different. Different is always good,” McClure said. “And trains, I love looking at trains, the history behind the Long Island Rail Road, and different trains and how they evolve, so it was really the historical nature that attracted me to the project.”
With the mural complete, the museum has further plans to beautify the area, including working with the Center for Developmental Disabilities to have some of their students make a small garden in front of the mural as part of their ongoing collaboration. The Main Street Association has also helped by providing the museum with a grant to put up signage above the artwork to better highlight the new project for residents who might miss it otherwise.
Report an inappropriate comment