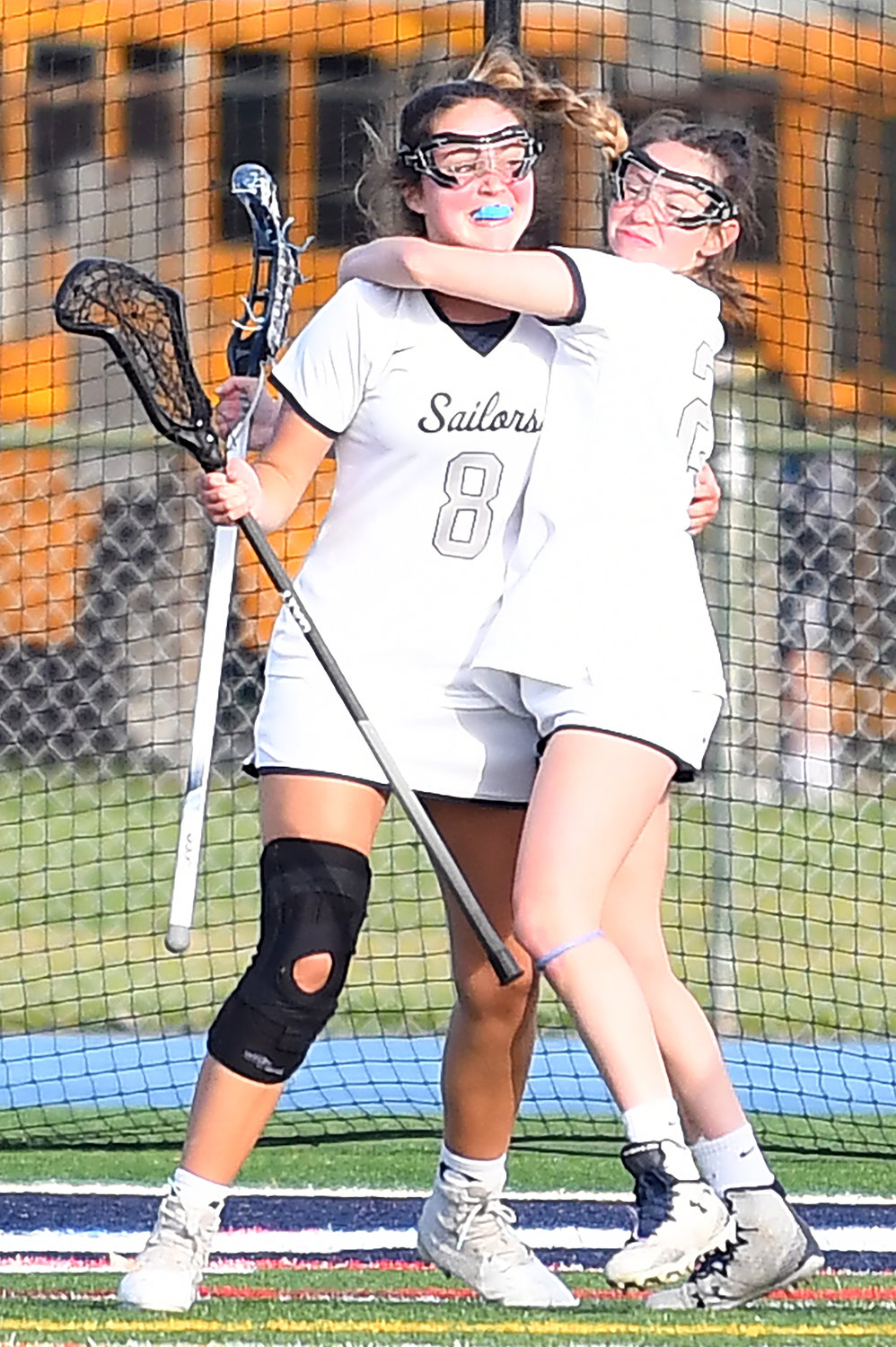 Oceanside’s Megan Checola, left, and Cassidy Reicherter celebrated after one of Checola’s five goals in the May 18 playoff win over East Meadow.
Neil Miller/Herald 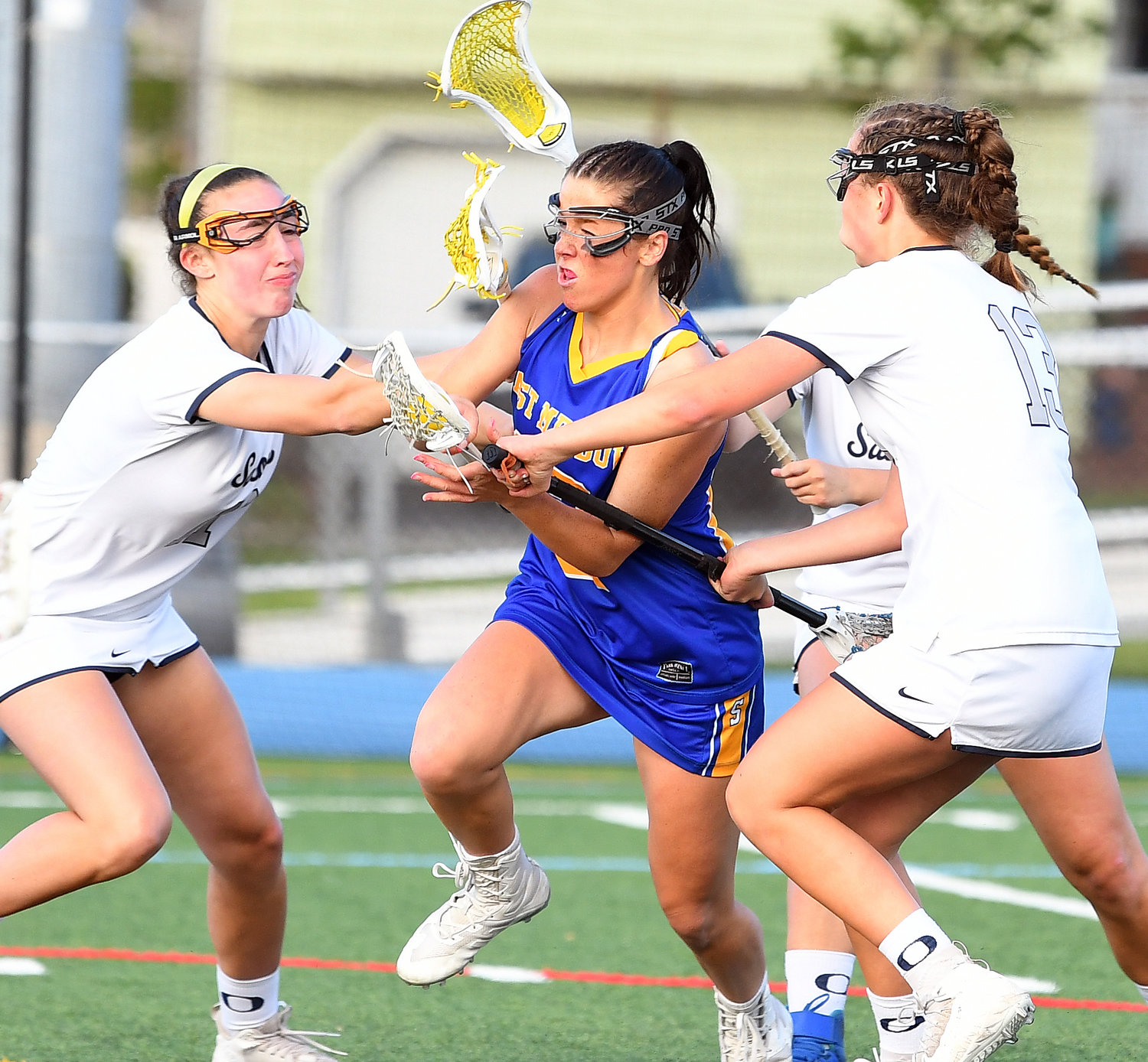 East Meadow’s Lindsay Solenski split a trio of Oceanside players during the Jets’ playoff appearance on May 18.
Neil Miller/Herald
Previous Next
By Jamie deJong

Oceanside girls’ lacrosse proved that its regular-season success was not a facade, as the Sailors won their Nassau Class A quarterfinal playoff game against East Meadow, 16-3, on May 18.

The third-seeded Sailors controlled nearly every facet of the game, indicating they are a true contender for the rest of the postseason. Coach Ralph Montera Jr. was elated to see certain tenets in their preparation carry over into the actual game.

“The girls played with confidence,” Montera Jr said. “It was really all set up in practice this week, as they worked hard and believed in each other.”

Offensively, ball movement and unselfish play were the central catalysts for the hefty goal total. Many of the Sailors’ goals were the byproduct of scripted sets and giving up a good shot for a better one. Nine Sailors scored goals, reinforcing how much of a team effort this was. Junior attack Megan Checola was a consistent source of offense, scoring five goals and adding two assists. Sophomore Maeve Barrins and senior Lily Johnson also were instrumental pieces of their attack, with each notching three points.

Defensively, the Sailors were able to mitigate any momentum or rallies for East Meadow. Senior goalie Izzy Weintraub had seven saves, with many shots coming from point blank range. Sophomore Natalie Paul came up huge in certain junctures in both the face off game and in clearing.

With this win, the Sailors advance to the semifinals where they were to face No. 2 Syosset on Tuesday at 6 p.m. after Herald press time. It will certainly be a strenuous challenge, but if they play with zeal and confidence like they did against East Meadow there is an avenue to victory.

“We just have to keep playing confidently,” Montera Jr. said. “We were kind of the favorite in this game and the next game we are going to be the underdog. But we just have to play the same way and believe in each other.”

For East Meadow, the central issue was keeping the Sailors out of enemy territory and keeping possession on the other side of the field. The Sailors proved to have a potent offense and were given ample chances to demonstrate that. Considering the way last spring went for East Meadow, this season was still a sizeable improvement and nothing to be ashamed of. The Jets beat Freeport in an elimination game to advance to face Oceanside.

“For us, we went defeated last season,” East Meadow coach Nicolette Tortorici said. “To make it all the way this far is huge. We already felt so successful, and we don’t have any regrets.”

Despite the unfortunate defeat, the Jets still showed heart and fought regardless of the score. Senior Lindsay Solenski was persistent on offense, scoring two goals in the first half. She finished the season with 65 goals. Junior Isabella Pota scored a goal in the second half off a penalty, which turned out to be the final goal of their season. Sophomore goalie Dynastee Ramos had four saves on the afternoon, mitigating some of the Sailors’ scoring attempts.