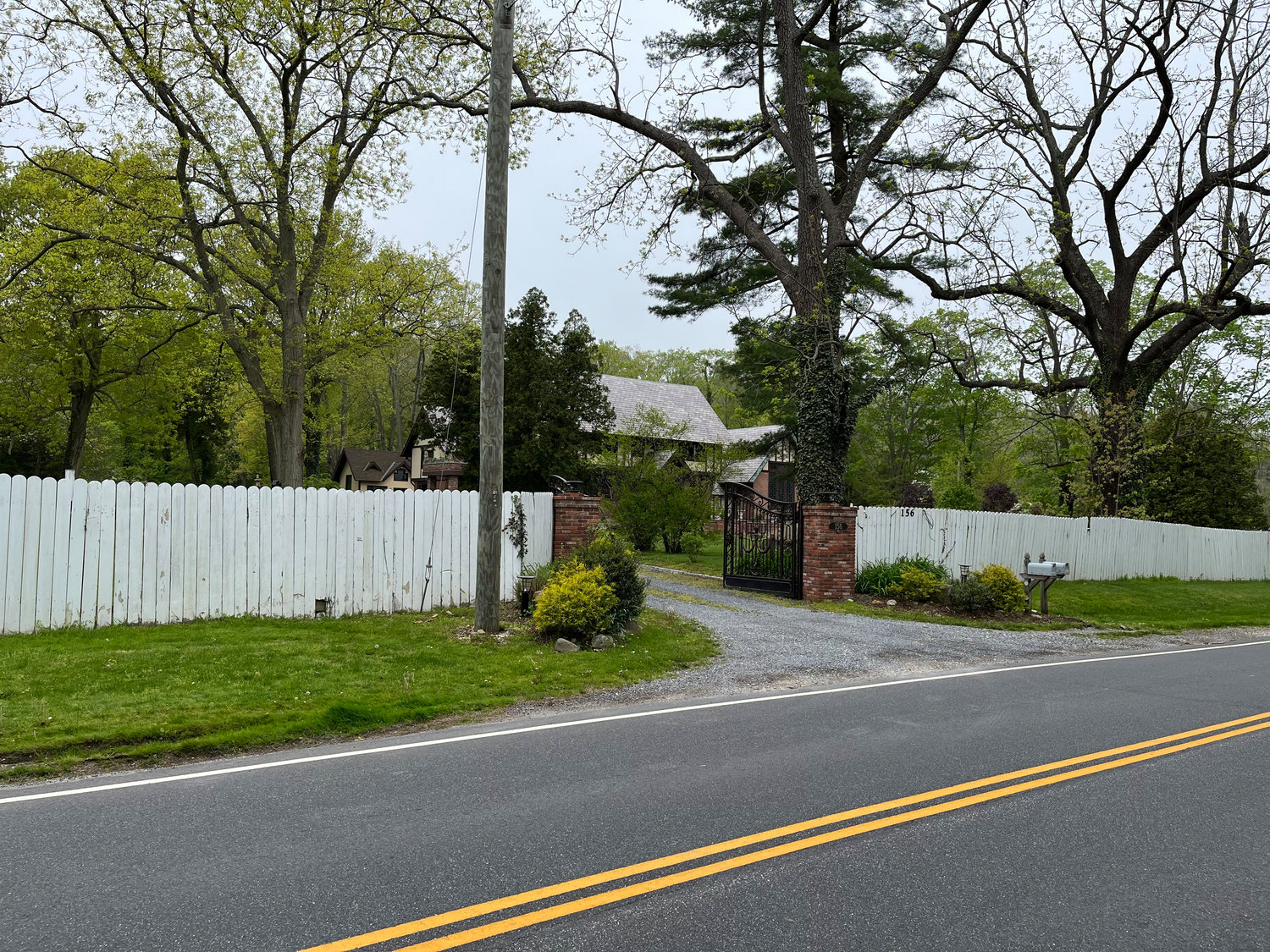 Among Qing Ming Yu’s numerous violations was the construction of a front gate without the proper permits.
Will Sheeline/Herald
By Will Sheeline

The residents of Cove Road knew Qing Ming “Allen” Yu for years as an inconsiderate and unpleasant neighbor. But none of them ever suspected he would be accused of murder.
On May 10, Yu was arrested by the Federal Bureau of Investigation and the New York City and Nassau County police departments at his home in Oyster Bay Cove, where he has lived since 2015.
“As alleged, the defendants callously used gun violence to resolve a business dispute, reducing the value of a man’s life to a dollar figure, and bringing trauma and mourning to the community,” Breon Peace, the U.S. Attorney for the Eastern District of New York, said in a statement the day of the arrest. “Prosecuting killers will always be a top priority for this office, whether the defendant pulls the trigger, or pays someone else to do his dirty work for him.”
Yu was a property developer and chief executive of Amaco Management & Consulting Inc., a Manhattan development company. One of his employees and protégés was Xin Gu. According to a news release from the U.S. attorney’s office, Gu believed Yu’s business model was unsustainable, questioned its financial viability and formed his own company in 2018. Shortly after Gu left, several other employees did, too.
According to court filings, Yu lost not only employees, but also numerous clients, as well as a major contract that he referred to as the “Project.”


He had sunk roughly $900,000 into acquiring the Project, a $1 million contract, and Amaco was forced to close at the end of 2018, leaving Yu enraged at Gu’s perceived disloyalty, according to the U.S. Attorney’s news release.
Yu then allegedly enlisted the services of his nephew, You “Eddie” You, of Plainview, to deal with his rival. You and two accomplices allegedly murdered Gu outside a karaoke bar in Queens on Feb. 12, 2019, during a celebration of the Chinese Lunar New Year.
From the time he moved into Oyster Bay Cove until his arrest, residents and village officials claim, Yu was a problematic neighbor, at best, and a malicious one, at worst. According to neighbors and numerous lawsuits and complaints against him, he frequently ignored permit requirements for construction on his property, which had a negative impact on local wildlife, and he was known for having a number of large dogs that roamed his property and beyond.
“He had lots of complaints against him over the years on a wide number of issues,” said a local official who declined to be identified. “He built gates without permission, he broke lighting code — it was just problem after problem.”
In 2018, the year before Gu was murdered, the village of Oyster Bay Cove fined Yu nearly $250,000 for his numerous infractions. Mayor Charles Goulding explained that the problems could have been avoided if Yu had taken the time to obtain the proper permits.
“We first gave him a notice of violation that basically said, hey, you haven’t done what you’re supposed to do, and he ignored it,” Goulding said. “So when you have someone who ignores these mounting violations over time, they tend to compound.”
One of the most egregious violations of local ordinances was Yu’s construction of several chain-link fences, plywood barricades and cement walkways along the perimeter of his property without obtaining any permits. The barriers blocked neighbors from walking through the woods on the property, which had been common practice for 50 years, according to a presentation made by residents to the Village Board in 2017.
The barriers also impacted local wildlife, because parts of Yu’s property are protected wetlands inhabited by numerous species, including the rare Eastern tiger salamander, which is found only on Long Island. The chain-link fencing crossed several streams, creating the potential to injure animals as well as block the streams with a buildup of trash and detritus.
Yu’s failure to control his large and aggressive dogs, a German shepherd and a Doberman pinscher, was an issue cited when Yu was fined in 2018. According to neighbors, the dogs still frequently wander off the property, and are highly aggressive.
The Herald's attempts to reach Yu  or a representative from his family were unsuccessful.
Yu is currently being held in federal custody in Brooklyn. “My client is charged with crimes that he vehemently denies,” his attorney, James Kousouros, said, “and we will be contesting these charges.”
Report an inappropriate comment