Renovations should be finished by early spring 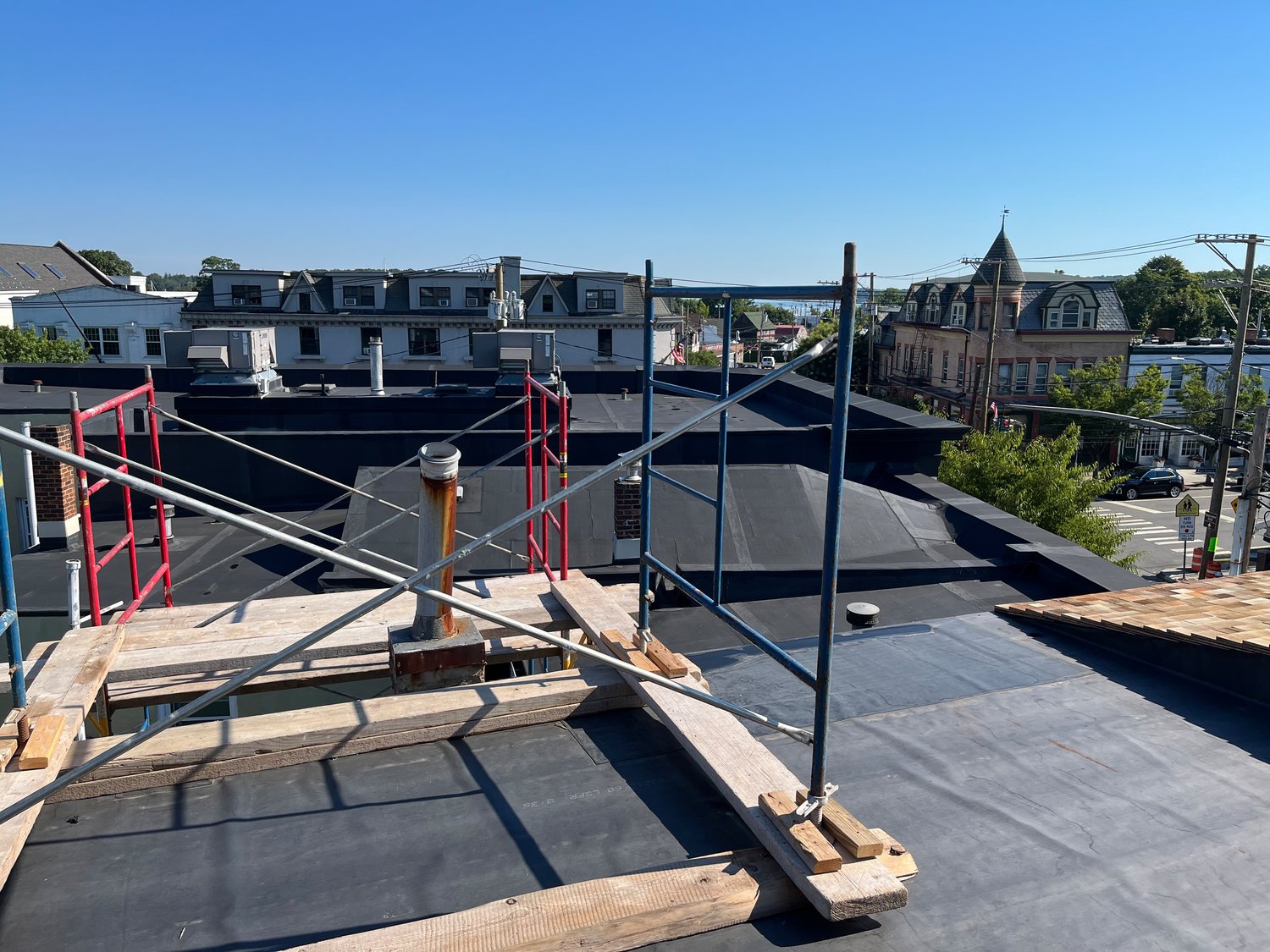 Tenants of the Snouder’s building will have access to the rooftop, giving them a unique view of the historic hamlet.
Will Sheeline/Herald 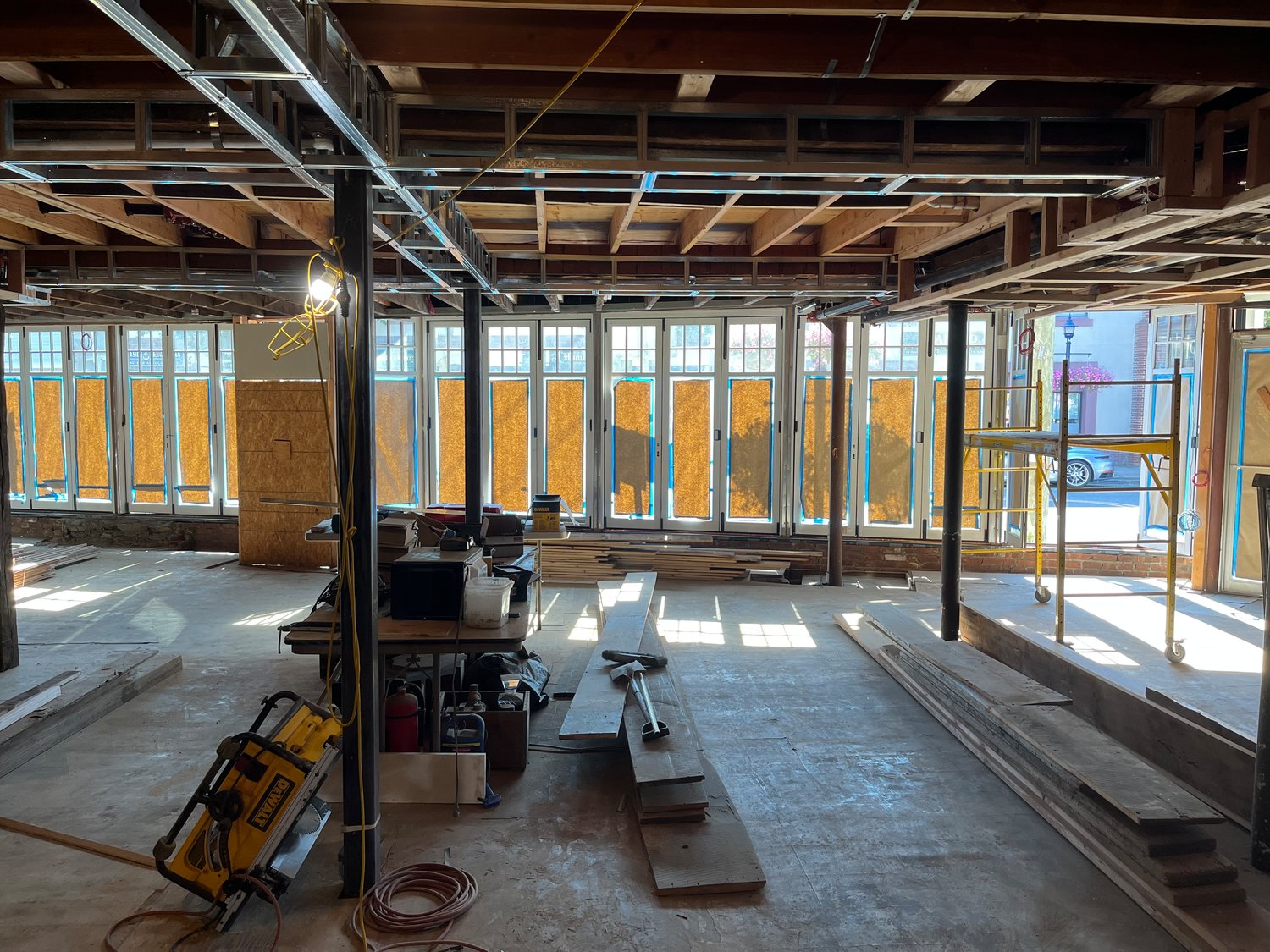 Roughly 70 windows have been replaced with historically accurate replicas, which will provide superior heat retention compared to the originals.
Will Sheeline/Herald
Previous Next
By Will Sheeline

Now nearing the end of its third year of reconstruction, Snouder’s Corner Drug Store is well on its way to completion. It’s estimated the store will be completed by the beginning of spring of 2023 at the latest following a long and arduous journey.

Snouder’s was an institution in Oyster Bay for over a century, founded in 1884 by Abel Miller Conklin, and was the oldest continuously operated business in Oyster Bay until its closure in 2010. In addition to being a cultural center of the hamlet, where children and adults would gather to enjoy the soda fountain installed in 1889, the store also played an important role in the presidency of Oyster Bay’s “first citizen,” Theodore Roosevelt.

During Roosevelt’s tenure as governor of New York, and subsequently his presidency, he would spend most of his summers in his Oyster Bay home at Sagamore Hill, known in posterity as the “Summer White House.” As Snouder’s had the only telephone in Oyster Bay, any messages for the president had to be relayed through the drug store, further cementing its place in the Oyster Bay history.

Recreating the glory of this building has not been a smooth ride due to the nature of the construction business in the pandemic and post-pandemic world. According to Tim Lee, owner and president of Lee Construction and Renovation, which is working on the project, and a partial owner of the building, the supply chain has still not recovered from the effects of the pandemic, making it harder to get specialty items necessary for historical renovation work.

In addition, inflation has also taken its toll as costs of many materials continue to rise, further increasing the project’s budget.

Despite this, Lee and his team remain optimistic about the project, and he asserted that despite the challenges, they have still made good progress.

“You know, we’re definitely picking up speed,” Lee said. “The end of the year, beginning of the spring is where we’re headed to try and get the apartments and shops up and ready to go.”

Since the Herald’s last look at Snouder’s, 70 of the building’s windows have been replaced with historically accurate replicas, each of which costs roughly $1,000 according to John Collins, the historical architect for the project and former member of the Town of Oyster Bay’s Landmarks Preservation Commission. Collins, an architectural historian, highlighted the difficulties in balancing the desire to keep the building as historically accurate as possible while also making sure it’s fully adapted to 21st century living, as they had to replace the original windows to modernize them for future tenants.

“The reality is that because the top floor is going to be rental units, a tenant wants to be able to have screens and all of that,” Collins explained. “When you drive by, if I wasn’t pointing it out to you, you really wouldn’t know they were replacement windows because we’ve preserved the exterior casing and matched the size of the panes of glass and all of the other little details.”

The next major steps for the renovation, starting in the next three to four weeks, involves renovating the walls and “bones” of the structure by using spray foam, a type of insulator and adhesive, followed by sheet rock. Once this is complete, the final stages, painting and remodeling the interior will begin.

PSEG will be installing a new electrical system and grid to the building, which had not been updated in several decades. Because the new Snouder’s will require a high volume of electricity, as it houses two stores and three apartment buildings, a new utility pole will be erected either across the street or next to the building.

In addition, the rooftop of the building will be available for use by the tenants of the apartment buildings, providing a view of Oyster Bay that encompasses the entire the hamlet, and even a direct view of Oyster Bay Harbor. Tenants will not be able to cook or grill on the rooftop due to the risk of fire hazard.

Jean-Louis Thibon, project manager for Lee Construction and Renovations, explained that the project has proven to be challenging and interesting. He said despite the long haul, including waiting seven months for confirmation from the New York state government to put the windows in, they’re finally reaching the home stretch.

“It has been a lot of work, but better to do it slow and well than fast and poorly, no?” Thibon pointed out.