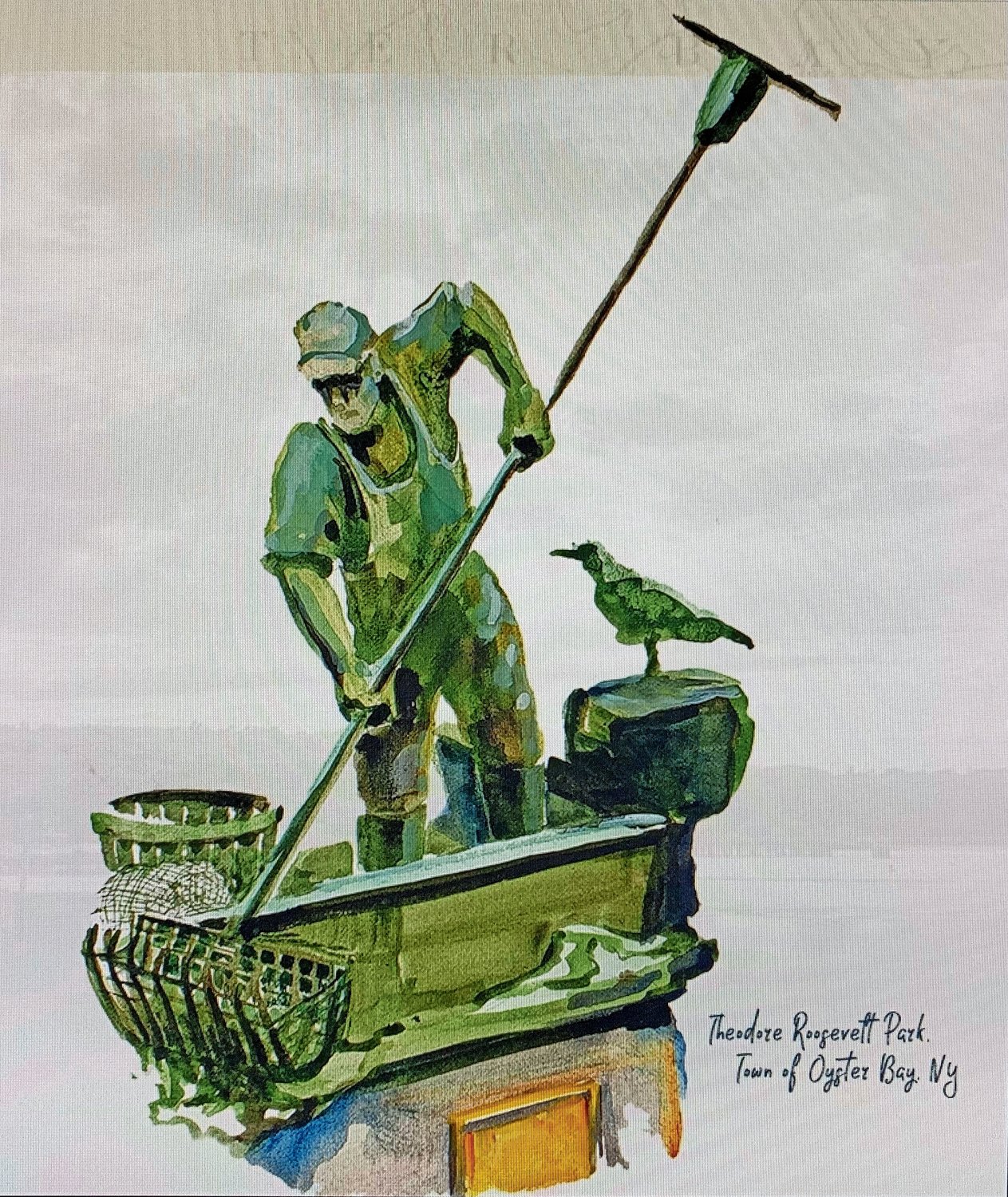 A watercolor created by Kirk Larsen, of the monument — a bayman clamming — was shared at the Town of Oyster Bay meeting on May 11.
Courtesy Baymens Heritage Association
Plans for the monument

Construction to be completed by October 2023.

Unveiling the day before the start of the Oyster Bay Oyster Festival in October 2023.

Ceremony will be a community event.

Commitment to capitalize on awareness of the Oyster Festival, but not have unveiling ceremony overwhelmed or lost during the actual kickoff of the festival. The festival will be a perfect venue to introduce the monument to the general public.

Life changed forever for John Kennedy during the early hours of May 17, 2020, when his son Mike was found floating in the Long Island Sound off Centre Island, his clam boat a quarter of a mile away. He had been a bayman for two decades, and clammed regardless of the weather. The day he drowned, it was windy and the water was choppy.
His death devastated the community. With a ready smile, Mike was popular among the baymen as well as residents living in his hometown of Bayville.
John Taylor was sitting on his Sound-facing patio with his wife, Patricia Anglin, that morning. They saw the search-and-rescue effort on the water, but never imagined it was for Kennedy. A mason before becoming a clammer, he had built the couple’s patio. He and Taylor had become friends over the years.
There was much talk after Kennedy died, Taylor said, about doing something to commemorate him. Taylor put an online petition on seven social media sites to gauge interest in honoring Kennedy, quickly collecting 867 signatures.
Taylor spoke to William Painter, the president of the North Oyster Bay Baymen’s Association, a nonprofit supporting the efforts of noncommercial clammers, of which Kennedy had been a member. NOBBA had been receiving donations in Kennedy’s name. There had been much discussion among the members, Painter said, to find a fitting tribute for Kennedy. Taylor and Painter decided a monument should be erected.


Painter went to see John Kennedy to discuss the idea. “Billy said they were thinking of putting up a memorial to honor Mike,” Kennedy said. “I said that’s nice, but Mike wouldn’t want a memorial. Then we all decided to do a memorial for all baymen.”
Doug Rodgers, a member of NOBBA, said baymen wanted to start a foundation. “We wanted to think of baymen as a vocation, which we are trying to keep alive,” he said. “Our association is more focused on restoring the bay. A foundation would help if a bayman needed emergency funds for family members or if they got sick.”
Kennedy filed for a 501(c)(3) nonprofit status, receiving approval on May 6, 2021. The Baymens Heritage Association was born. It mission is to “develop and preserve local shellfishing history, conserve and protect our current shellfishing resources, and most importantly to educate and promote this tradition to future generations.”
Then a monument committee was formed. Artist Kirk Larsen, of Hicksville, was hired to create a sketch of the concept for a site the association hoped would be at Theodore Roosevelt Park in Oyster Bay and a watercolor of the proposed monument — a bayman clamming. Sculptor Jeff Buccacio, of Massachusetts’ Buccacio Sculpture Services was also hired to create the bronze monument.
Taylor said the monument will be surrounded by information plaques that tell the history of shellfishing in Oyster Bay, and will also explain the various processes used to harvest shellfish. The objective, he said, is for visitors to “come away with a deeper appreciation of the work performed by Oyster Bay’s baymen.”
The monument will also be surrounded by benches, where residents can sit and enjoy the view, and reflect on the contribution the baymen make to the hamlet and surrounding villages.
“They are up at the crack of dawn all winter long working and then they have to sell it to their wholesalers,” said Taylor, who is on the committee. “I don’t want to walk my dog and they’re out there digging for clams. I admire them. The monument is a level of respect for them.”
Kennedy never knew how many lives his son touched until the checks came pouring in shortly after the funeral. “It was $5 here $10 there. I ended up with $13,000,” Kennedy said. Unsure of what to do with the money, he deposited it into his checking account never touching it. When the association was formed he transferred the money to its account.
It’s estimated that $500,000 will be needed for site construction and the erection of the statue. Only public funding will be used.
Taylor appeared before the Town of Oyster Bay’s board on May 11 to share a presentation about the monument and a request for a publicly accessible location on which to erect it. The town supported the endeavor unanimously offering an area near the boat ramp in Theodore Roosevelt Park.
The location is ideal, Taylor said, not only because it is in a well-used and scenic waterfront park on the bay, but because it is next to the launching ramp and docks where many baymen depart and return each day to and from their job on the water.
Rodgers is hoping the monument will also send a message to baymen. “I want them to say to themselves let me be safe today,” he said. “Maybe the guys will see the statue and remember a bayman passed away and maybe they will look at it and say I’ll be extra careful so I get home.”
There are fewer than 10 baymen working in Oyster Bay, Rodgers said, with others going to more lucrative spots in other areas, including New Jersey. He wants to keep the profession alive. “Heritage might be a thing to make people want to clam again,” he said. “We might even need to train them on how to do it.”
Plans are to create a picturesque setting for the area surrounding the monument. There will be oyster and clam shells, which would be surrounded by a brick walkway. As was done for the Babylon Bayman’s Statue, bricks would be etched with the names of companies and individuals who donated towards the project.
Painter said the monument and the town’s cooperation in finding a location are meaningful. “Oyster Bay is named after the tradition of clamming which has gone on for hundreds of years with no recognition to the baymen. This will fill that void,” he said. “This will be a tribute to the hand digger, the independent bayman.”
Report an inappropriate comment