'The team behind the dream’ share pandemic nutrition tips 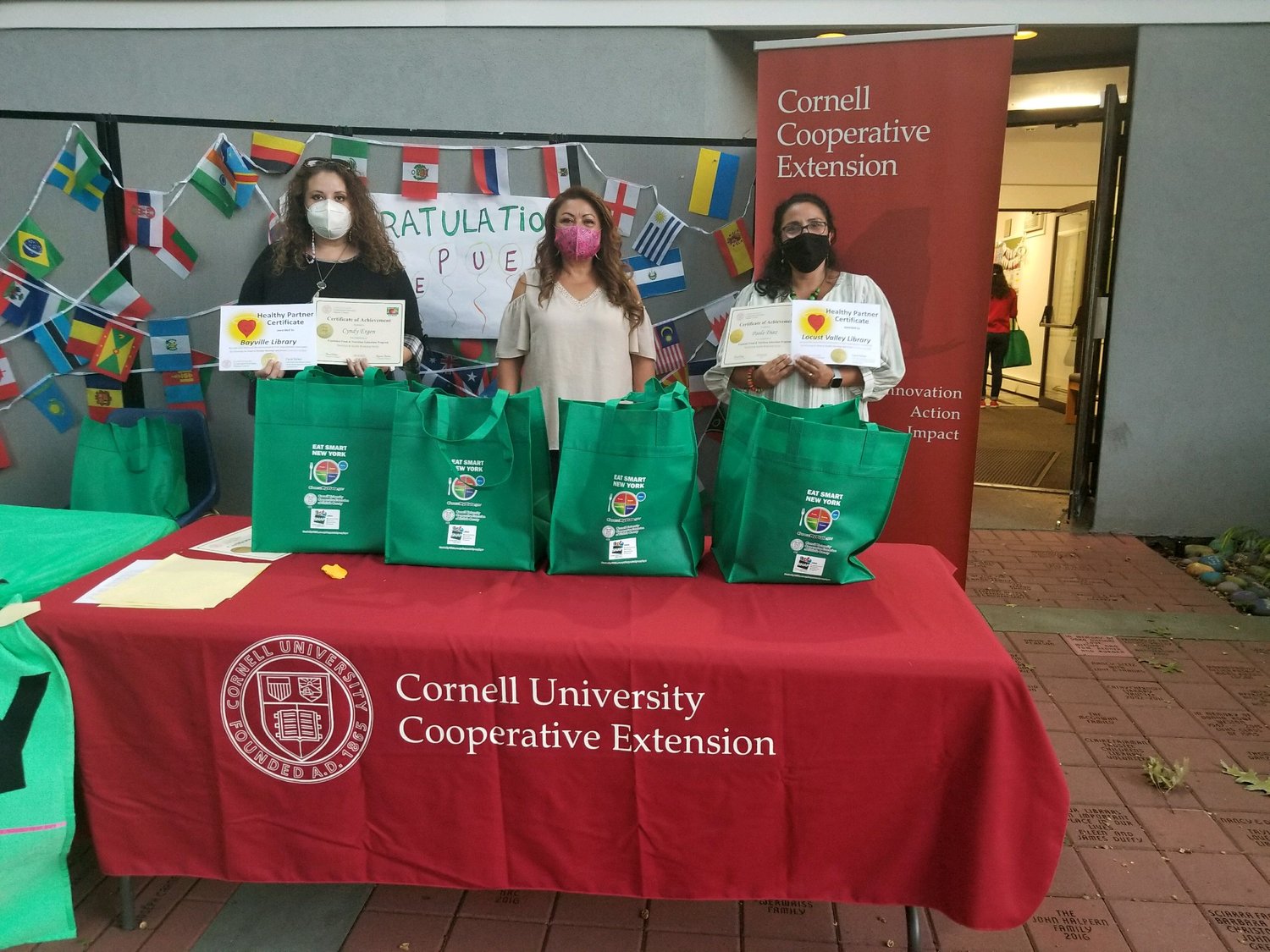 Cyndy Ergen, who works part-time at the Bayville Library, left, with Eugenia Cuadra, who teaches classes on nutrition, and Paola Diaz, the ESL outreach coordinator at the Locust Valley Library. The three present a program to help the Spanish-speaking community learn about nutrition.
Courtesy Paola Diaz
By Laura Lane

Ana Maria Nunez lost 20 pounds in three months by changing her diet, utilizing what she learned in the “Eating Smart Being Active” classes offered at the Locust Valley Library. Nunez, who is originally from Mexico, has lived in Locust Valley for 23 years. She said she had never taken a class at the library before, and enrolled in that one because she really wanted to lose the weight she had gained during the coronavirus pandemic. Now she drinks water as soon as she gets up each morning, she said, eats smaller portions and eats two cups of vegetables and fruit a day.

“Every class, we talked about different topics, one for meat, one for vegetables,” Nunez said. “My friends noticed I’m losing weight and asked me how I did it. Now they’ll be taking the class too, as will my sisters.”

Dr. Bradley Sherman, the medical director at Glen Cove Hospital, said that patients  have gained a great deal of weight during the pandemic, which he attributed to several factors, including people’s tendency to be more sedentary, especially when they were told to stay home. “I’ve been recommending that they exercise outside and watch their portion control,” he said. “Some are also suffering from depression, anxiety and social isolation, leading them not to be cautious with what they are eating.”

Cyndy Ergen, of Bayville, a Spanish interpreter in the Locust Valley Central School District who works part-time at the Bayville Library, met Paolo Diaz, the ESL outreach coordinator at the Locust Valley Library, at Bilingual Night, which Ergan organizes twice a year for the district’s Spanish-speaking community. The purpose is to share information with parents so they can be involved in their children’s education, including managing the district’s website and calendar.

Diaz met Ergen while attending one of the presentations with a group of Spanish-speaking parents from her Locust Valley neighborhood. They realized that they both knew Eugenia Cuadra, the community nutrition educator at Cornell Cooperative Extension of Nassau County, so Ergen asked Cuadra to speak about nutrition at Bilingual Night. The parents were fascinated about the information Cuadra shared, which prompted Ergen and Diaz to ask her if she would teach a nutrition class for Spanish-speaking people at Locust Valley Library.

“Paola and I ended up becoming best friends and a great team,” Ergan said. “My former library director, Christine Edwins, used to call us ‘the team behind the dream.’”

Before the pandemic, the Bayville and Locust Valley libraries had hosted eight weeks of classes at the Locust Valley facility, the larger of the two. They had to switch to Zoom after the pandemic hit, but that didn’t discourage the Spanish-speaking community from participating. Twenty-two people completed the course two weeks ago, and enjoyed a drive-by graduation at which they received certificates, bag filled with recipes, copies of their class presentations and even measuring cups.

Cuadra, who lives in Huntington, said she shared the basics of eating properly. “I love my job and love having this experience with the participants,” she said. “It’s amazing to see the changes each week. It’s different doing this on Zoom but the women still share a lot.”

Dr. Dominick Gadaleta, the chief of bariatric surgery at North and South Shore University hospitals, said that when the hospitals reopened in June, weight gain led many people to avoid seeing their doctors. “Most people gained from 10 to 20 pounds, but a handful of my patients were the same weight as before Covid. But no one lost weight,” Gadaleta said. “Fifteen to 20 percent of my patients are Spanish-speaking. Their return to medical care has been slower, I think, because their trust of medicine is less, and also they were hit really hard by Covid compared with other people.”

The class at Locust Valley Library offers information on portion control, food safety and how to prepare healthy meals for children. Cuadra, who emails recipes to the women, also presents one of her healthy recipes during each class. Because the class is on Zoom, several of the participants make the recipe following her lead.

Anabel Walzer, of Port Washington, said she took the class to learn how to eat less and feel better. Married and the mother of two grown children, she said she shares what she learned with her daughters, who no longer live at home.

“I learned to read labels in the supermarket, and how much meat to eat during my meal,” Walzer said. “I’ve been trying to eat more grains and vegetables, too. This class has made me want to learn more. And I made friends there, too.”

The class, which has been offered for the past two years, has drawn people of all ages, Diaz said. When the pandemic hit and the library was closed, the decision to continue teaching the class on Zoom ended up having some advantages, she said: It drew participants from Chile and Columbia.

But Zoom also created a new challenge. “One elderly lady wanted to join, and knew nothing about the computer,” Ergen said. “I told the lady she had to learn how to do Zoom and use her computer, and helped her. I think this pandemic pushed us all to do amazing things, things we never knew how to do. So I was not only helping people with nutrition, but also technology.”

Diaz credits Ergen, who is connected with Latino parents through the school district, with ensuring that the community knew about the class. The two take part in all of Cuadra’s classes.

“It’s not just another class for me,” Diaz said. “The connection we have with the participants is very special.”

Nunez said that although the class is over, she is continuing to eat properly. “I don’t want to gain weight again,” she said. “I went to my doctor, and she told me she was so happy about my weight loss. She congratulated me. I have my certificate in my bedroom so I can always see it.”