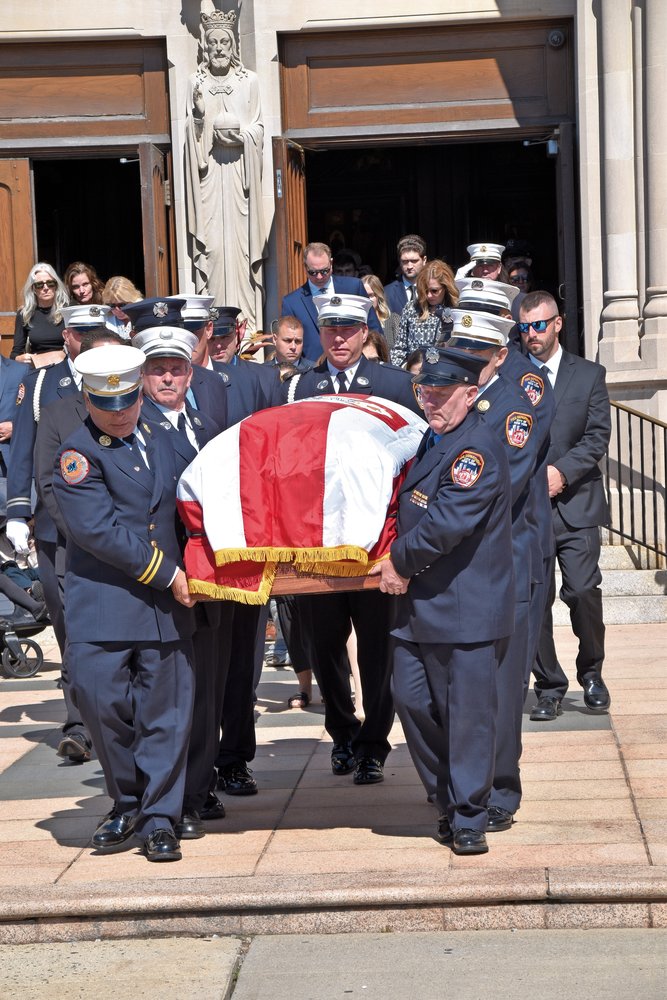 Stephen J. Geraghty, a retired FDNY battalion chief and a Rockville Centre native, died last week of an illness related to the Sept. 11 attacks. His casket was transported by the Fire Department to St. Charles Cemetery in Farmingdale.
Bill Kelly/Herald 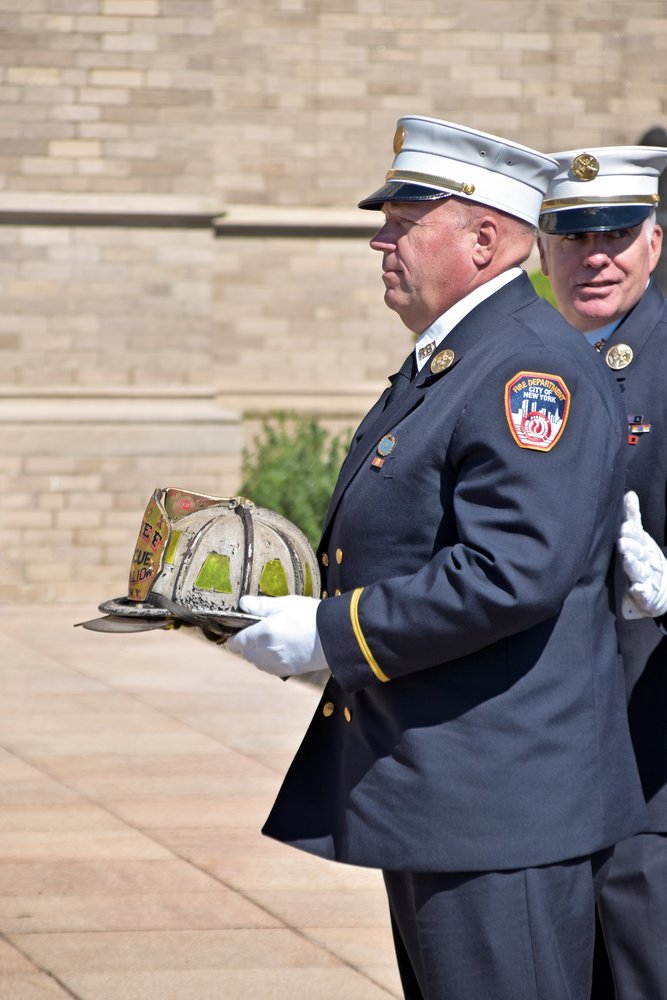 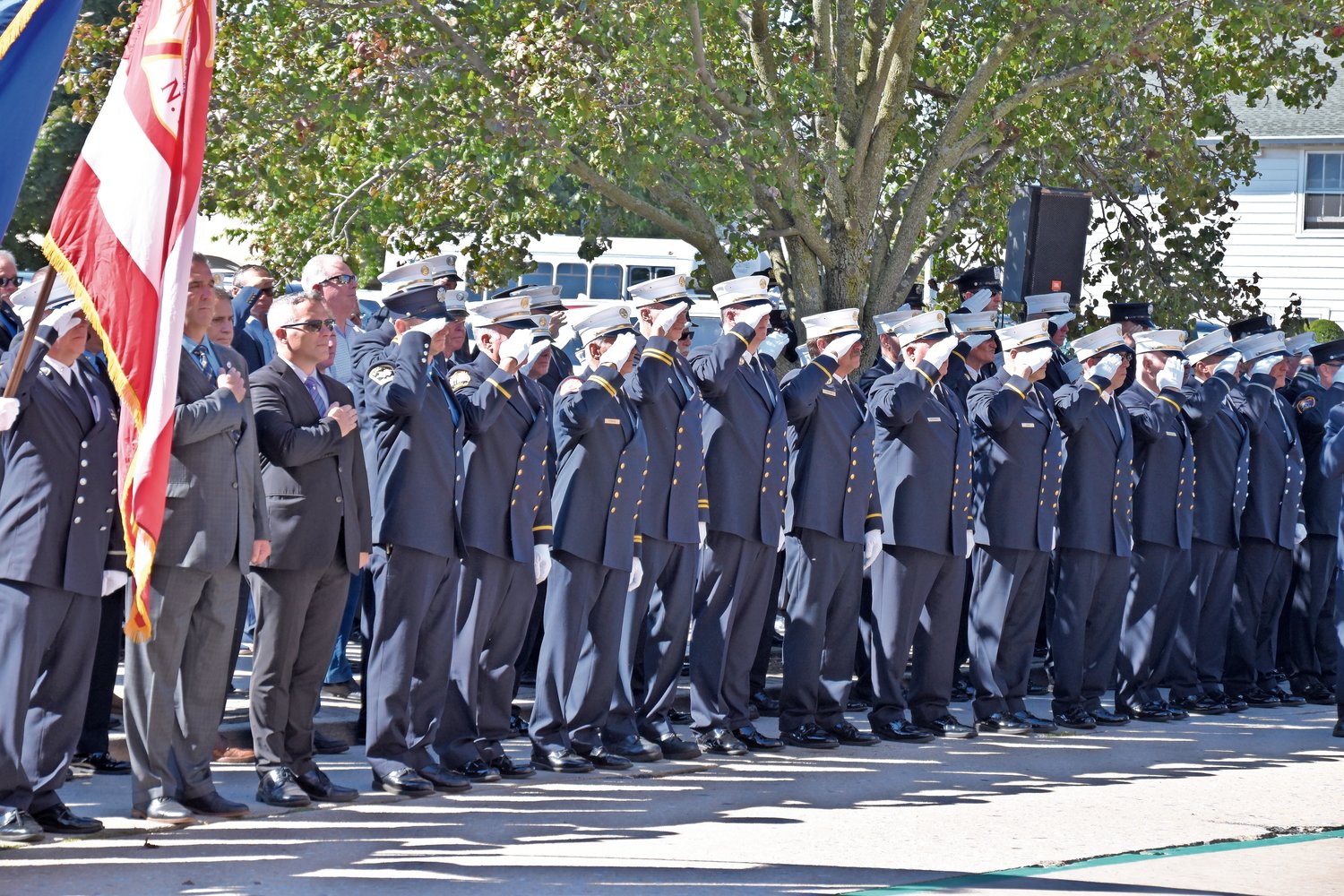 Firefighters salute as pallbearers lift the casket from the back of the fire engine and into St. Agnes parish.
Bill Kelly/Herald
Previous Next
By Daniel Offner

Stephen J. Geraghty, 62, a retired FDNY battalion chief and a Rockville Centre native, died on Sept. 21, after a long battle with an illness related to the aftermath of the Sept. 11 attacks on the World Trade Center. He was the fourth member of the New York City Fire Department to lose his life this last week to a 9/11-related illness.

Geraghty served as one of New York's bravest for more than 40 years before he retired in 2021. He was also a volunteer with the Rockville Centre Fire Department, and an ex-captain of the Eureka Hook, Ladder and Bucket Company No. 1.

“Battalion Chief FDNY Stephen Geraghty served New York City and the Village of Rockville Centre as a volunteer firefighter with incredible courage and bravery,” Mayor Francis Murray said in a statement. “As chief of rescue operations for the New York City Fire Department, Geraghty was instrumental in the aftermath of 9/11. Often putting the needs of others over himself, he exemplified a true hero. This heartbreaking loss is a painful reminder of the dangerous and difficult work our firefighters do every single day.”

Geraghty began his career as a volunteer firefighter in Elmont, along with his brother, Eddie.

Eddie Geraghty, who went on to become chief of the FDNY's 9th Battalion, was working in Lower Manhattan on Sept. 11, 2001, and the 45-year-old, third-generation firefighter was one of the hundreds of first responders who died that day. Stephen rushed into the city shortly after the attacks to search for his brother, and later learned, from recordings of FDNY radio communications, that Eddie perished when the World Trade Center’s south tower collapsed. His body was never recovered.

Stephen devoted much of the rest of his career to training young firefighters in preparation for “that day when things go bad,” he said.

“We take all precautions and are prepared for any imagined scenario,” Geraghty told the Herald in 2016. “But although we’re vigilant about what could happen, we’re not afraid to live our lives.”

He went on to teach at the Nassau County Fire Academy, where he dedicated himself to improving the training there, focusing on better preparing firefighters for the next disaster or terrorist event in order to save firefighters’ lives.

The FDNY Bureau of Training mentioned him in a recent newsletter. “Chief Geraghty was an unyielding advocate for training,” the bureau wrote, “and was the driving force behind many of today’s training initiatives.”

Over the course of his career, Geraghty received numerous medals and commendations for his work with the FDNY, Nassau County and the Rockville Centre F.D.

Visitation was held last weekend at the Macken Mortuary, in Rockville Centre, followed by a funeral at St. Agnes Cathedral on Monday, where more than 100 firefighters from several departments gathered outside to pay their respects.

Before the service, Geraghty’s funeral procession was escorted by police along Quealy Place, with the last of two fire engines carrying his casket. His family and closest friends were the last to arrive as pallbearers prepared to lower the casket from the truck and carry it into the church. Firefighters saluted, and members of the Emerald Society played “Amazing Grace” on the bagpipes.

During the service, Geraghty’s son, Christopher, a member of the Rockville Centre Volunteer Fire Department’s Hook and Ladder Company, told the mourners how his father’s wisdom and guidance shaped him into the man he is today, a proud father, loving husband and dedicated fire chief.

“He led by example, and told me to be honest, loyal, and to do the right thing, even if it wasn’t the easiest or most popular,” Christopher said. “He worked hard, and expected the same from others who worked with him. Their accomplishments as a group, whether it was through training or planning for his next disaster talk, will be a help for generations.

“Over the past week,” Christopher continued, “people have stopped by to send condolences or share stories, describing him as a mentor, a role model, a teacher and a loyal friend. But to me, he was more than his vast accomplishments. To me he was Dad. I don’t think I could ever thank my dad enough for everything that he’s done for my family or for friends and strangers. I hope to walk in his footsteps and, as he always said, leave things just a little better than you found them.”

Geraghty is survived by his wife of 37 years, Cathy; his siblings, Timothy, Lynn Carrata, Janet Baronian, Maureen and Colleen; his children, Christopher, Scott and Lauren; five grandchildren, and other extended family members.

Following the ceremony, members of Geraghty’s family were presented with his Battalion Chief helmet in honor of his service to the NYPD.

His casket was transported by the department to St. Charles Cemetery in Farmingdale, where he was buried.