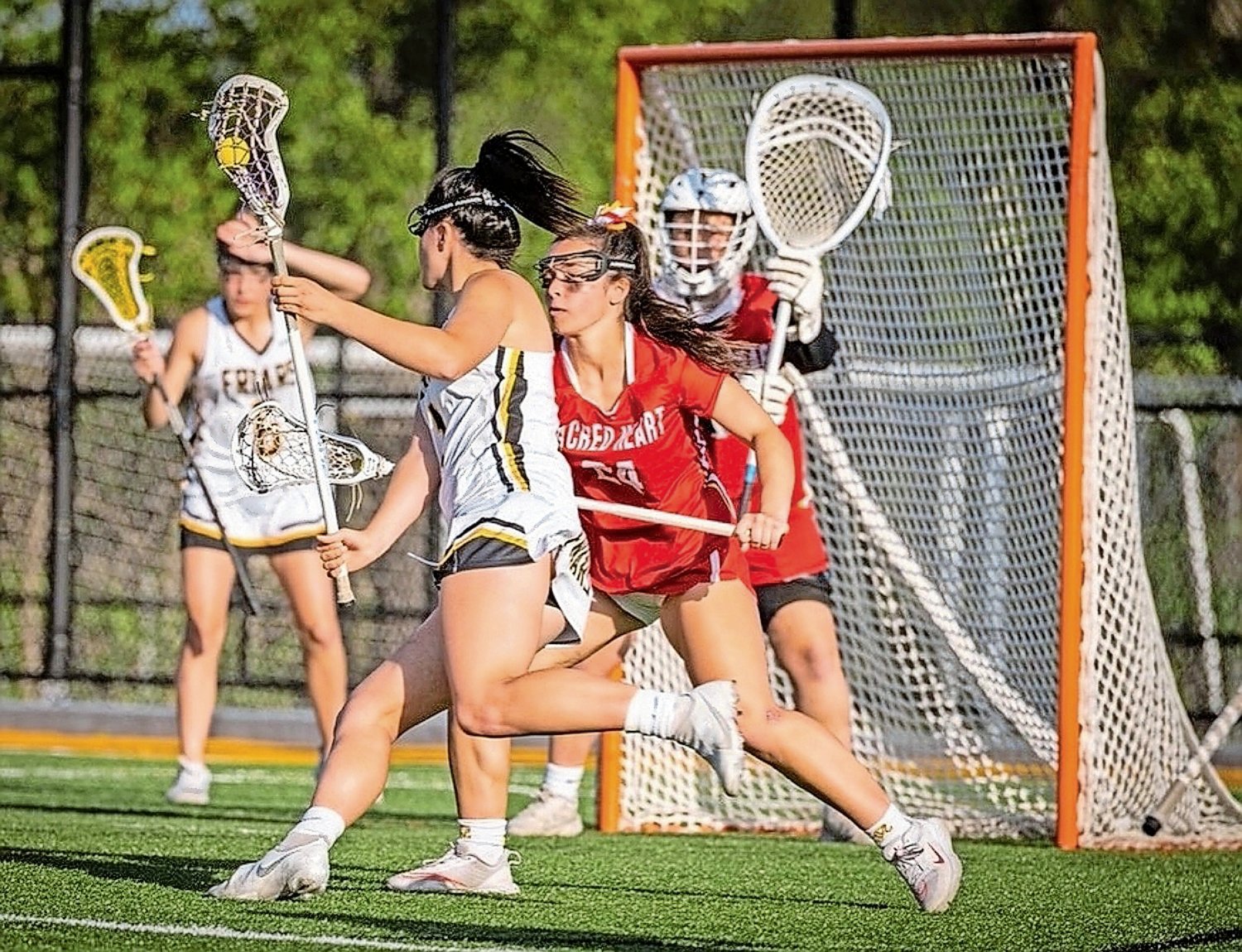 Thanks to her work with a foundation named in memory of Rockville Centre’s own Mary Ruchalski, Sophia Paesano — No. 24 — was awarded the U.S. Lacrosse Jackie Pitts Award soon after she graduated from Sacred Heart Academy.
Courtesy of Kathy Paesano
By Daniel Offner

A foundation named after a Rockville Centre girl who died from a rare cancer, is celebrating a recent Sacred Heart Academy graduate who won a U.S. Lacrosse award.

Sophia Paesano was presented with the Jackie Pitts Award last month, in recognition of her charitable efforts with the Mary Ruchalski Foundation and Camp Anchor.

Paesano, 17, was instrumental in the foundation’s Play 4 Mary campaign, launched during the coronavirus pandemic in 2020, with the goal of raising money for the organization and spreading awareness of pediatric cancer.

Ruchalski is remembered by the community as a talented multisport athlete who played lacrosse, softball, basketball and soccer, and swam. She was a key player for Rockville Centre’s 10-and-under Police Activity League softball team that played in the state championship in 2016. She also excelled in school.

“Sports were always a big part of my life and my relationship with Mary,” Paesano said. “It was really special to me to be able to create this opportunity to play for a bigger reason.”

The foundation hosts charity lacrosse games with the mission of spreading awareness of pediatric cancer. But what began with a singular focus on girls’ lacrosse has expanded to include girls’ and boys’ football, basketball, volleyball, soccer games as well as clinics.

Sophia’s mother, Kathy Paesano, helped co-organize the foundation after Ruchalski, who was an especially close friend of Sophia’s sister, Mary, died. “We are overwhelmed at how quickly this movement has taken off,” Kathy Paesano said. “We are so proud to see so many coaches here in Rockville Centre and surrounding communities supporting our cause.”

This year was a special one for the foundation. In June it hosted a lacrosse clinic for boys and girls featuring Cara Urbank, the captain of Boston College’s 2021 NCAA national champion lacrosse team.

“The energy they brought to our town was amazing,” Sophia Paesano said.

Leveraging her influence with the Sacred Heart team, she helped spread the word about the foundation’s campaign and organized games among Sacred Heart, Kellenberg, South Side High School, and the Liberty Travel Lacrosse program in Manhasset. She even organized a matchup between St. Agnes and St. Aiden’s middle school teams during halftime of a charity game this year.

She also helped make and sell Play 4 Mary T-shirts and socks to raise money, and distributed more than 500 bows for the Rockville Centre Lacrosse Club, which were given to every player from kindergarten through eighth grade.

On the field, Paesano, who plays defense, is a force to be reckoned with. But her efforts off the field are equally impressive. She has devoted much of her time to volunteering at Camp Anchor and Flying Point Camp for Autism in Southampton.

She also created and coordinated free tutoring sessions for St. Agnes students during the pandemic, partnering them with honor roll students from the Sacred Heart school.

Because she became a role model in both the school and the community, she was nominated for this year’s Jackie Pitts Award by Sacred Heart athletics director and head coach of the varsity girls’ lacrosse team, Morgan Molinari O’Connor, and was the unanimous choice of Long Island’s Catholic school coaches.

“I love to see the younger kids, who didn’t even know Mary, become involved,” Paesano said. “They’re all so passionate about living and acting just as Mary did. This is exactly the message and legacy we are trying to spread. This message not only brings me peace, but brings the message to everyone around me.”

Next year, Paesano will attend the University of Chicago, where she plans to play for the school’s NCAA Division III lacrosse team.

She said she intends to bring the same level of effort and intensity to the collegiate level.

She also hopes to continue her work with the Play 4 Mary campaign and the foundation’s ambassador program by helping get more kids involved. Those interested in helping empower local youth to make a difference can contact Carol Ruchalski at themaryruchalskifoundation@gmail.com.

In memory of Mary Ruchalski, Rockville Centre will host a special tree-lighting ceremony on Sept. 1, at 7 p.m., in recognition of pediatric cancer awareness month. Homes and trees around the village will be adorned with gold bows throughout the month, leading up to the weekend of Sept. 24 -25, when the community will “Light it up Gold” by placing luminarias on their doorsteps and on school grounds.

The luminarias, or paper-like lanterns, will be available for purchase on the foundation website; at Janine’s, on Park Avenue; and at several pop-up sales, at Polka Dot Pound Cake on North Long Beach Road, St. Agnes Cathedral and other locations throughout the month.

Getting help on taxes and exemptions