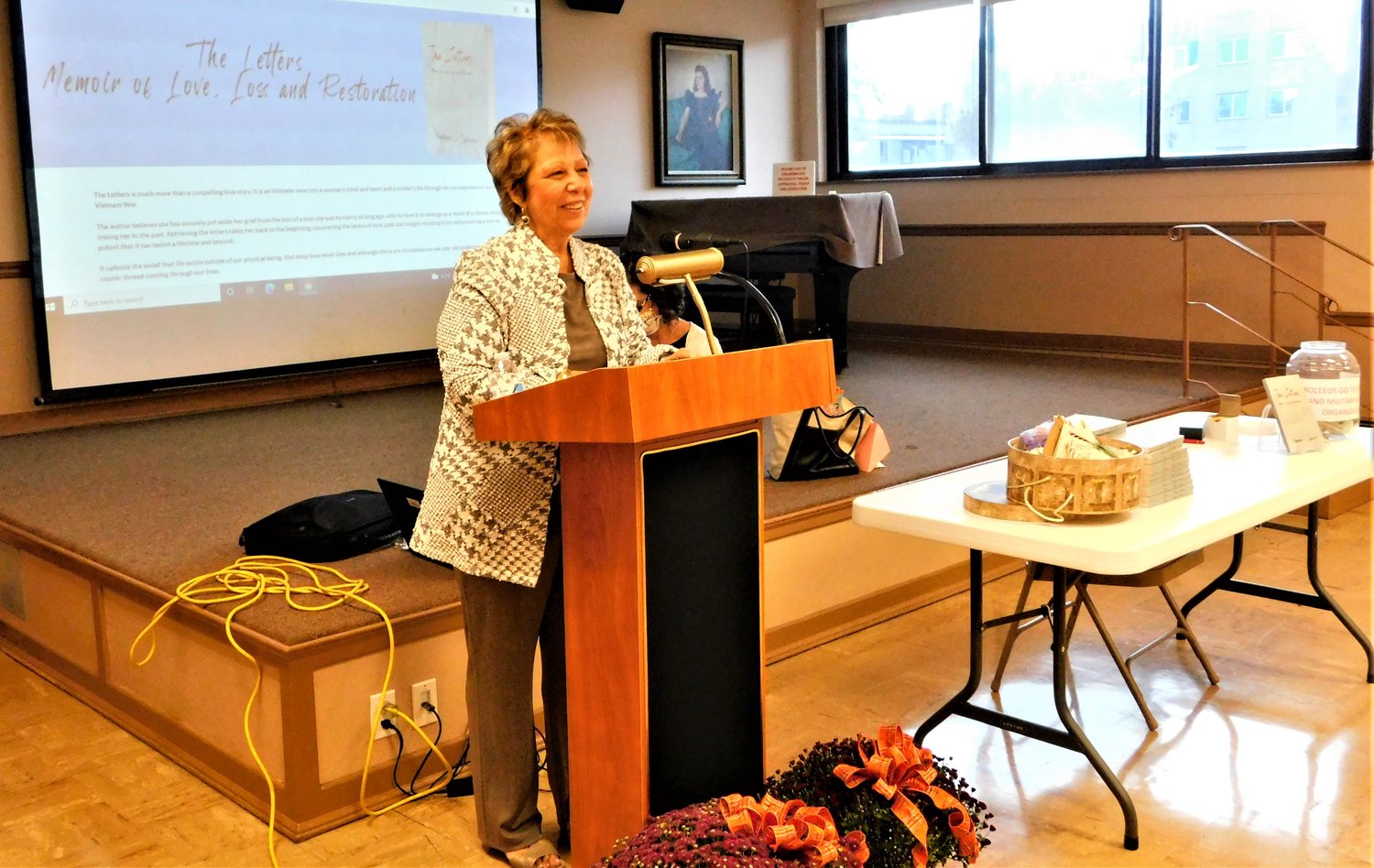 Barbara J. Spinelli, author of “The Letters,” held a book signing in the Freeport Memorial Library on Oct. 17.
Reine Bethany/Herald 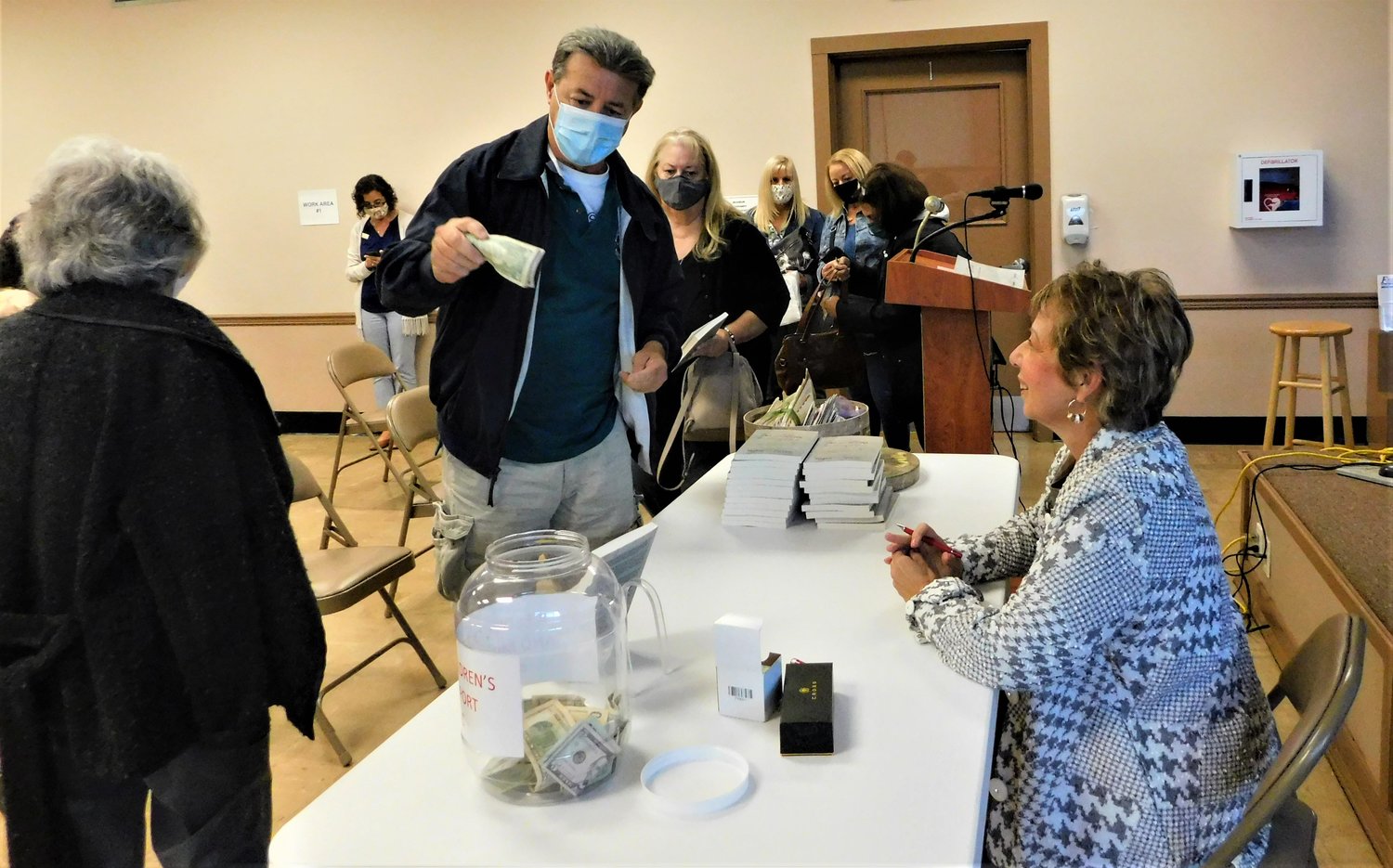 All money paid to buy “The Letters” at the book signing went to veterans’ charities.
Reine Bethany/Herald
Previous Next

I can attest to the fact that love and pain can coexist side by side. No regrets.”
Barbara J. Spinelli
By Reine Bethany

Before Barbara Spinelli, the career counselor at the Freeport Memorial Library, wrote “The Letters,” her grief over losing her young husband in the Vietnam War five decades ago remained deeply private. Now people from all over who have read “The Letters” are texting her and calling her to tell about their own grief. They are reaching for the healing that she found when she courageously faced the pain that she had shut into a hard-shell suitcase half a century before.

Grief is never an easy topic to approach, and hardly the route to a best-seller. But Spinelli’s subtitle — “Memoir of Love, Loss and Restoration” — strengthens the reader to pick up the book and not put it down until the end. The devastation of losing Lester “Chip” Cafieri while he was on an Army mission in a Vietnamese jungle is balanced by the restoration that Spinelli discovered when she reread the 200-plus letters that he had written to her, and rediscovered the power of his love for her.

Spinelli, 70, begins her book with the date 9/11/2020 and the words, “It is often said that many of our life changing experiences occurred on an average day or in an ordinary manner. This is no exception.” Amid the pandemic, she had her hair done for the first time in six months. A chance encounter near the beauty shop sent her to her childhood home in West Hempstead, to which she had returned years ago after a divorce. In a dusty crawl space in its attic, she found the suitcase that held the letters, and re-entered the world that she had consigned to obscurity — the world of her true love.

In 1968, Spinelli was a Brooklyn girl transplanted to West Hempstead. She met Chip Cafieri through a friend. Spinelli described the evening she found her soulmate straightforwardly: “That night, I learned you were genuine, insightful and compassionate. You wanted to know about me and listened to everything I said. … A few weeks later you told me you loved me and I knew I loved you. … Our fate was sealed.”

Spinelli held a book Oct. 17 at the library. She told her audience that when she and Chip met, “The world just fell away … and it opened up. He was a volunteer fireman. … To see what volunteer firemen did was interesting and fun and I was very proud of him.”

Through short excerpts from “The Letters,” Spinelli carried the audience through those initial months of falling in love to the afternoon when the couple encountered a policeman in Central Park who performed an on-the-spot civil marriage ceremony.

They had only been together for a few months when Chip’s draft number came up. He went to basic training, then into action, and the letters began — honest, loving, forthright from Chip about life in the Vietnamese war, with blunt expressions from Barbara about how much she missed him.

And then the letters ended.

As part of the book signing, Spinelli put on a video of an interview between herself and her publisher, Stephanie Larkin, who founded Red Penguin Books and Web Solutions over a decade ago, and published “The Letters” this August.

In the interview, Spinelli told of how, after not hearing from Chip for two weeks, a package came containing the dreadful letter written by Capt. Jose Strazzara: “I regret to inform you that Private Cafiero was reported missing on 12 March 1970.” In the same package were 17 letters Spinelli had written that Chip never saw and that Strazzara had returned to her from his effects.

Two weeks after Strazzara’s package arrived, it became clear that Chip had not merely gone missing on March 12, but had died that day. When his remains were returned to West Hempstead, Spinelli said, “I took all the memorabilia and locked it in a suitcase. The suitcase was tucked away in our attic.”

“That is such a metaphor for what we do with grief,” Larkin responded. “We tuck it away.”

Spinelli nodded. “I used to write journals,” she said, “and I began to write him back about today. … [Writing] was the string that kept us together when he was on the other side of the planet.”

As she wrote, she sensed Chip with her so profoundly that “I call him my coworker, because his presence helped me tell the story through the letters that were chosen.”

The moving narrative that she reconstructed through the letters, both those of the past and those she began writing in 2020, led to a reformation in her underlying worldview. Losing Chip had “created a script in my head not to hold onto anything, always waiting for the shoe to drop,” Spinelli said.

Writing and publishing the book reversed that script, Spinelli said, “because when you really know you’re loved, it changes everything. … My script is shifting, it’s changing because I see myself through his eyes.”

In addition to its narrative and Spinelli’s reflections, “The Letters” has a section of photos and a reading group guide. Spinelli has led memoir groups at the library and has often helped patrons negotiate deep feelings.

The entire experience has left Spinelli convinced that “grief does not have a timeline and love does not end when we physically leave the world.”

The finishing touch occurred when she found an old broken audio tape in the suitcase. An audio expert in Lynbrook restored it and put the sound on a flash drive.

“I can hear his voice,” Spinelli said.