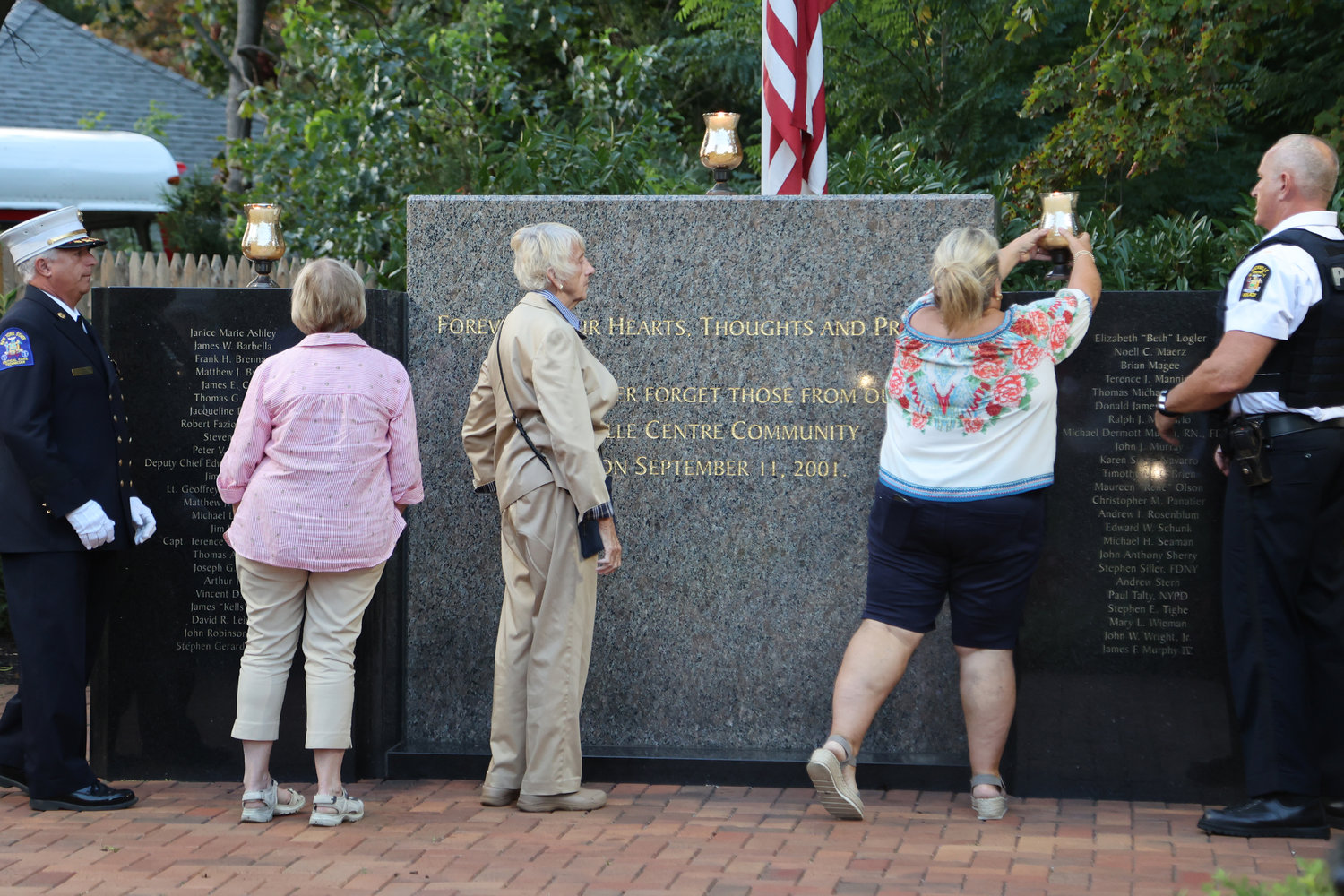 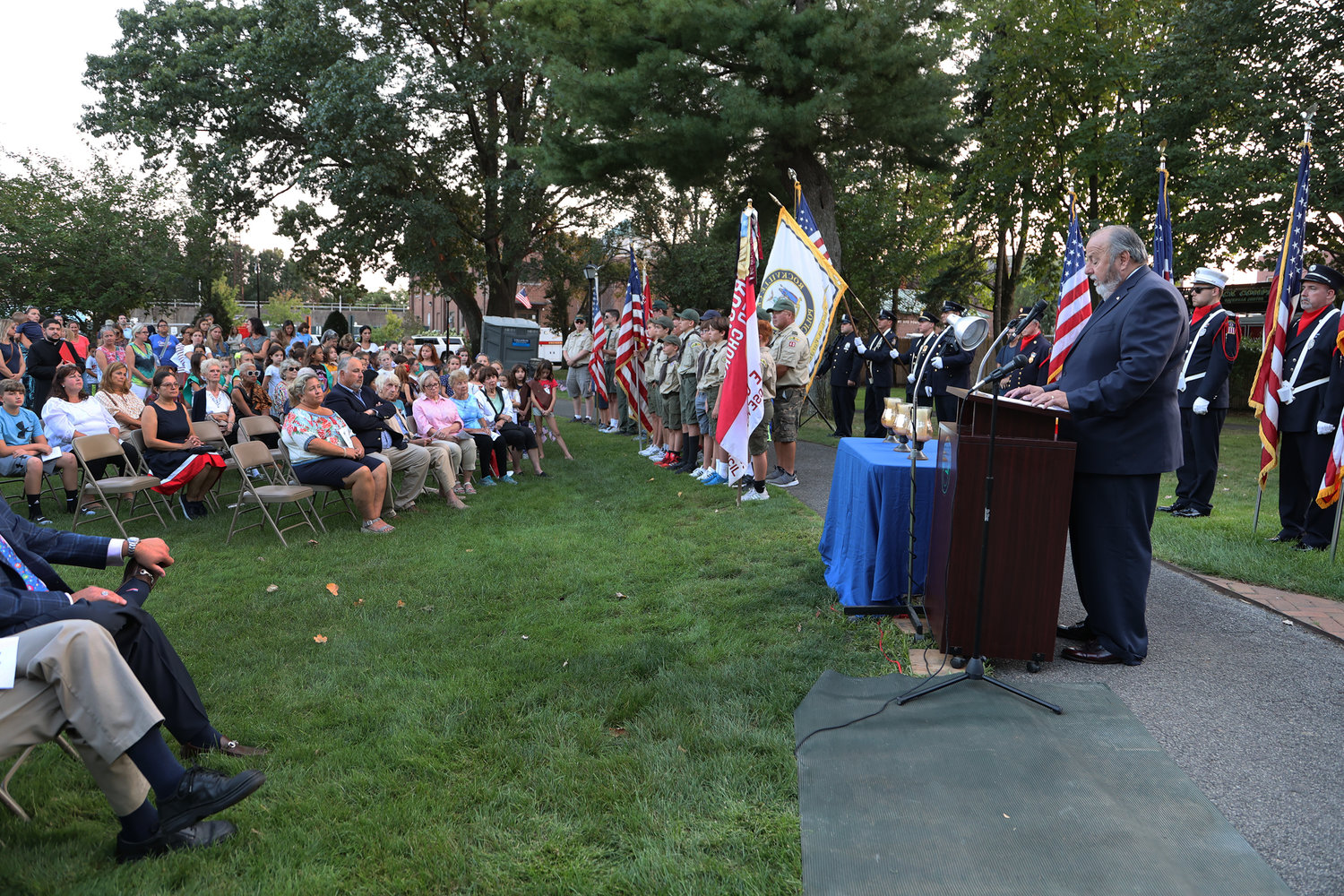 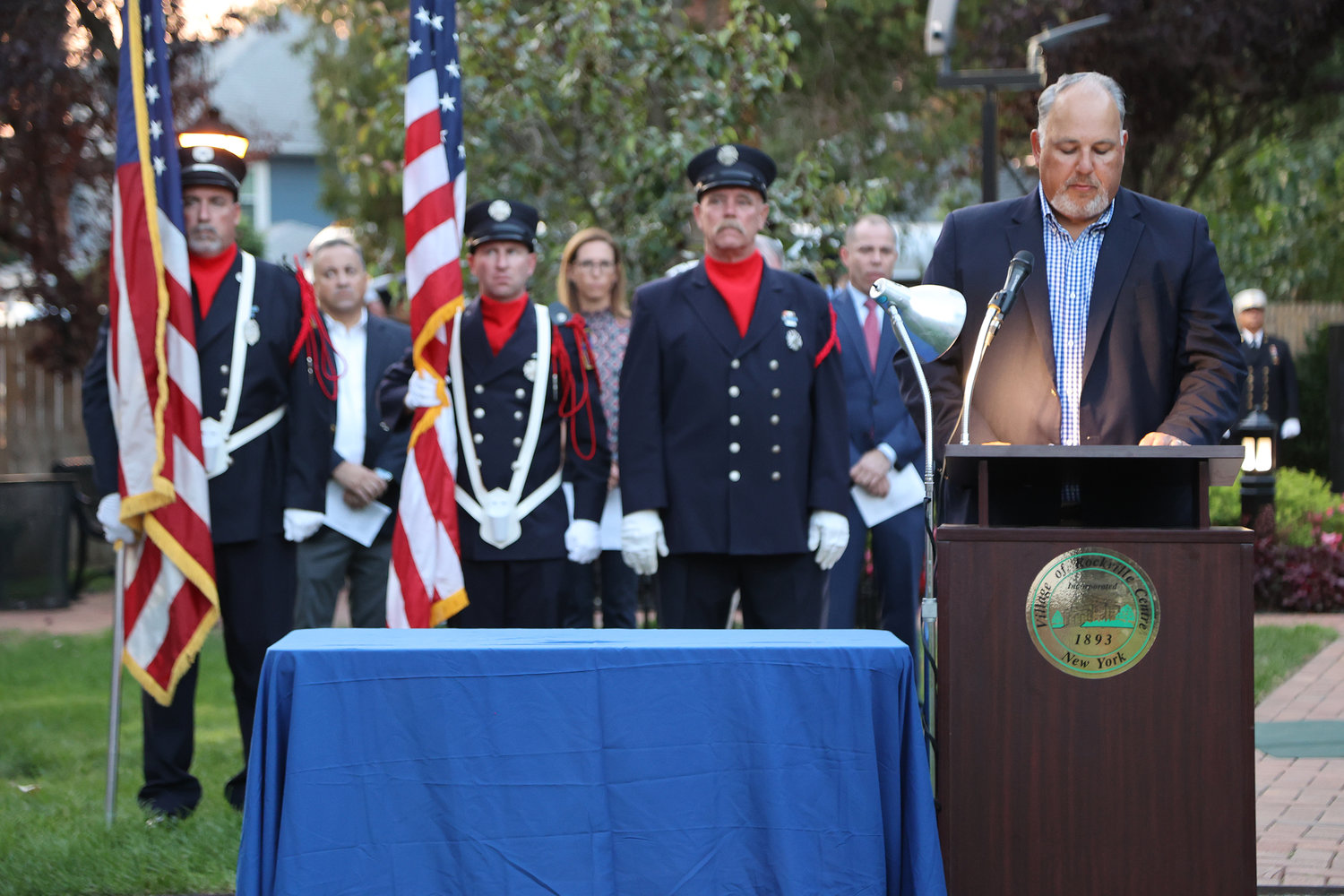 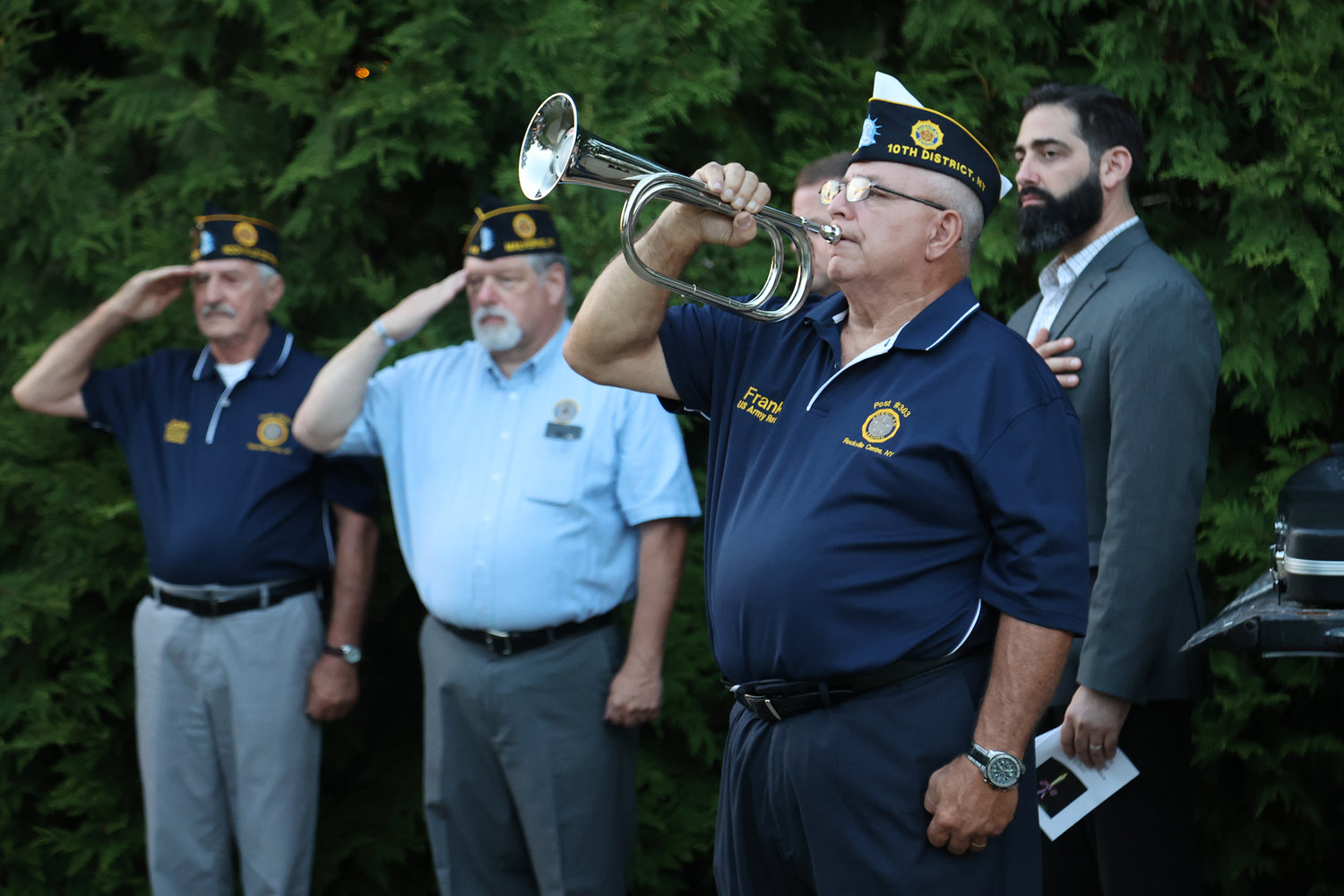 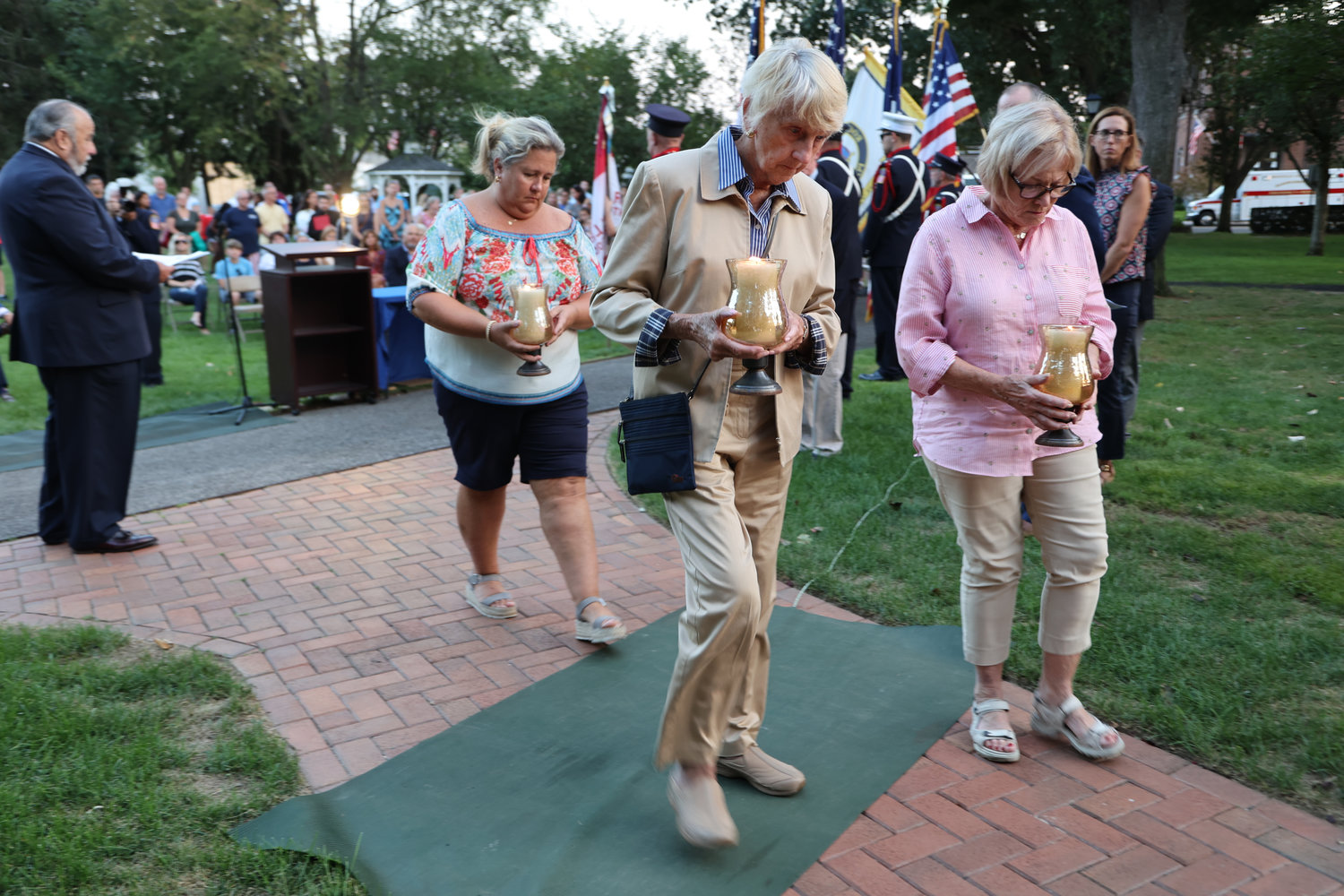 To honor and remember those lost on and since the attacks of Sept. 11, 2001, Rockville Centre held its 21st Year of Remembrance ceremony last Sunday evening on the Village Green.

St. Agnes Roman Catholic Church held a special Mass prior to the ceremony.

“Fewer communities suffered more than Rockville Centre, but no community rallied around its neighbors in the aftermath of that horrible event more than Rockville Centre,” Murray said, standing in front of the recently refurbished memorial. “As we have always done in the face of adversity, the invincible spirit of the people of this village was on full display. We lifted each other up. We responded with goodwill and generosity. We truly showed what it means to be Rockville Centre strong.”

“As we remember the events of Sept. 11, 2001, we ask you in your goodness to give eternal light and peace to all who died,” the Rev. Alessandro J. Da Luz, of St. Agnes, said in his invocation. “The heroic first responders, firefighters, police officers, emergency service workers, Port Authority personnel, along with all the innocent men and women who were victims of this tragedy simply because their work or service brought them there.”

Three candles were lit and placed on the three stone pillars of the memorial. Then Brian Logler, whose sister, Elizabeth, died in the attacks, spoke about how he and his family remember her each year. They share stories about Beth, who was a vice president at Cantor Fitzgerald, and describe what she was like to their children who never got to meet her.

Brian Logler said that while his family members wonder about all the great things Beth, and others who died, might have done, he prefers to remember their lives before that day. “I prefer to think that she and everyone else who died that day would be doing exactly what they were doing on Sept. 10,” he said. “They were lawyers and bond salespeople, police officers and firemen, mothers and fathers, brothers and sisters, husbands and wives, aunts and uncles going about their day as normal. Maybe they were noticing what an absolutely amazing late summer day Sept. 11 was. Maybe they were tired from watching the Giants game the night before. It was the last day of normalcy for a lot of families, including mine.”

Logler concluded by explaining how he comforts himself by thinking about all the good that has come from the tragedy, including a scholarship in Beth’s name for female business students at Adelphi and a garden built in her honor at Sacred Heart Academy. He noted that the number of lives helped by the various efforts and foundations exceeds the number of those who died on 9/11.

The names of the 49 village residents who were lost that day were read aloud, and then Rabbi David Lerner, of Temple B’Nai Sholom-Beth David, offered a closing prayer. “May our memory of the victims of that terrible day bring us strength and resolve, giving our hearts a greater capacity for love and affection,” Lerner said. “May the souls of those who perished be bound up in eternal life. May their memories be a blessing to us all. May their friends, family and community find some comfort in the days and years to come.”

The crowd stood as American Legion Post 303 Commander Frank Colon played taps, and Peter Garrity and Tom McNicholas, strumming guitars, led the singing of “America the Beautiful.” The attendees remained standing as the police and fire departments retired the colors, marching the American and Rockville Centre flags out of the Village Green, the sun having finally set.