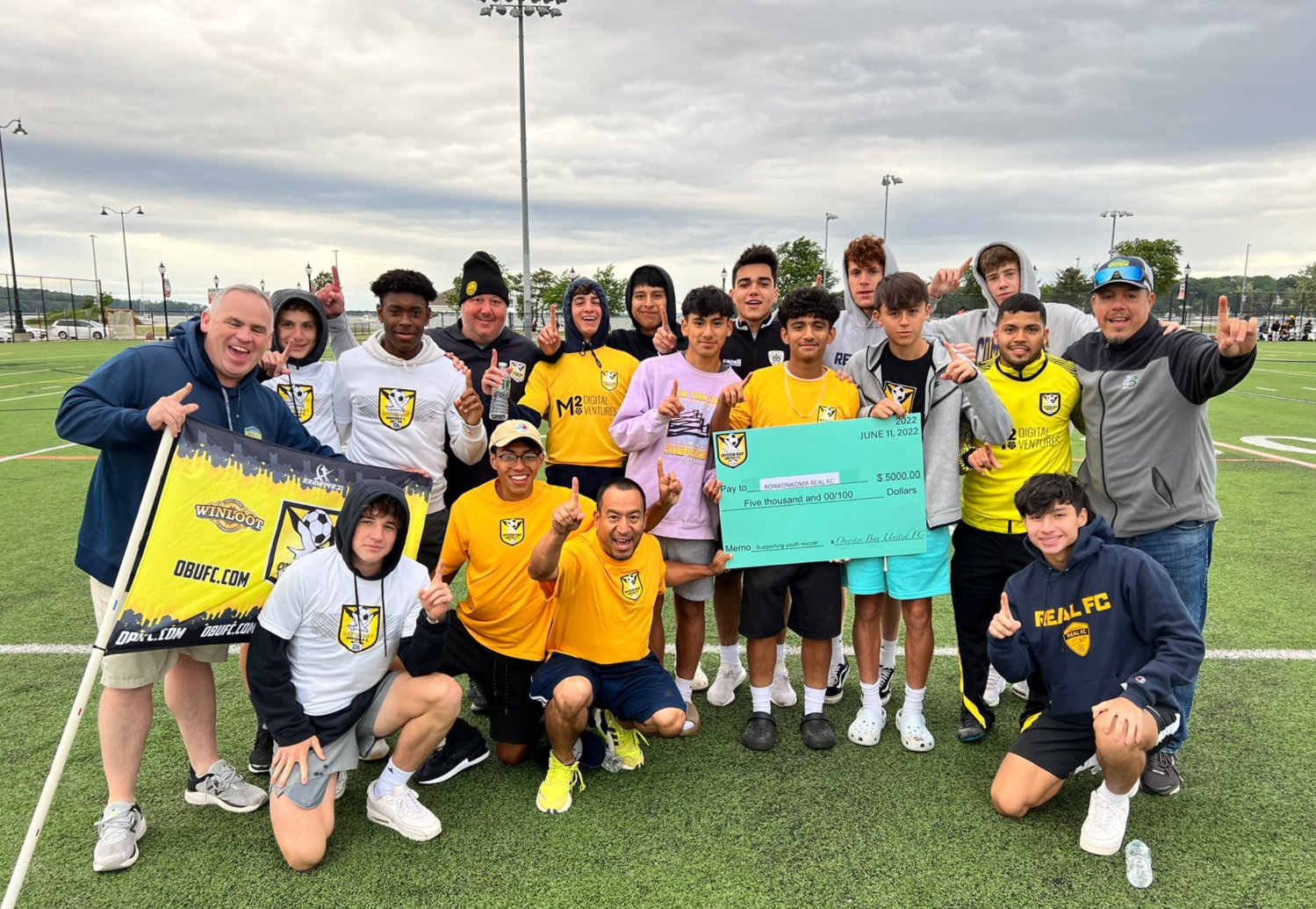 Oyster Bay United FC moved to just one step from their goal of taking home silverware as champions of the UPSL Northeast Conference on June 18, when 300 passionate and boisterous fans cheered on the semi-pro side in its 3-0 win over rival squad the New Jersey Alliance. This earned them a trip to the conference final scheduled for June 25 against Queensboro FC at the Aviator Center in Brooklyn.
OBUFC’s stellar play was only outshined by the $15,000 contributions made to three local soccer clubs over the past week. At the final regular season match on June 11, the team presented $5,000 checks to both Oyster Bay-East Norwich Youth Soccer Club and the Glen Cove Junior Soccer League. The team continued the generosity at this past weekend’s match by giving another $5,000 check to the Ronkonkoma Real FC who’s U17 squad is currently ranked third in the entire nation.
Oyster Bay United FC has established a reputation for providing an enjoyable, family-friendly fan experience with high quality soccer, as well as free t-shirts and pizza (37 pies last match to be exact) for all supporters. At half-time, dozens of kids take to the pitch to kick balls around. Post-match the kids can take photos and get autographs from players.
During half time presentation of the June 11 match, team owner and president Mark Colacioppo spoke to the crowd, which included representatives from the Oyster Bay-East Norwich and Glen Cove programs about his team’s desire to help grow youth soccer on Long Island and specifically in Oyster Bay. Colacioppo discussed how he hoped having OBUFC play quality competition in front of local fans along with the relationships being made with local clubs which has included players helping train youth players could help positively impact the growth of the game on Long Island.
At this week’s match, members of the Ronkonkoma Real FC U17 squad joined Colacioppo on the field for photos and check presentation. The youth team will compete in the US Youth Soccer Easter Regional Championship in West Virginia this weekend and have a chance to walk away from it as the top ranked team in entire country.


As for the match itself, OBUFC took a commanding lead by netting three first half goals to take their opponents out of the match. Joe Holland had two and Teo Chavez scored one, with season leading goal scorer Junior Rosero chipping in with two lovely assists. Keeper JC Perez made some huge early saves to prevent the Alliance from getting an early lead. OBUFC dominated possession in the second half to earn their place in the final against a strong Queensboro FC side. The win provided a measure of revenge for OBUFC as NJ Alliance defeated the team in last season’s final 1-0.
A Brief History of Oyster Bay United FC
Oyster Bay United FC competes in the premier division of the United Premier Soccer League, which is the fourth tier of the U.S. Soccer pyramid. Last fall, the club won three qualifying matches to earn entry into the main draw of the U.S. Open Cup, the longest ongoing soccer competition in the United States. OBUFC defeated Hartford City 3-0 in the opening round before losing a hard-fought match to second tier UPSL-Championship side Hartford Athletic 3-1 in the second round.
OBUFC supporters are encouraged to see OBUFC play the final match at home at the Aviator Center in Brooklyn on Saturday June 25 at 1:15pm. For more information, please visit www.OBUFC.com.