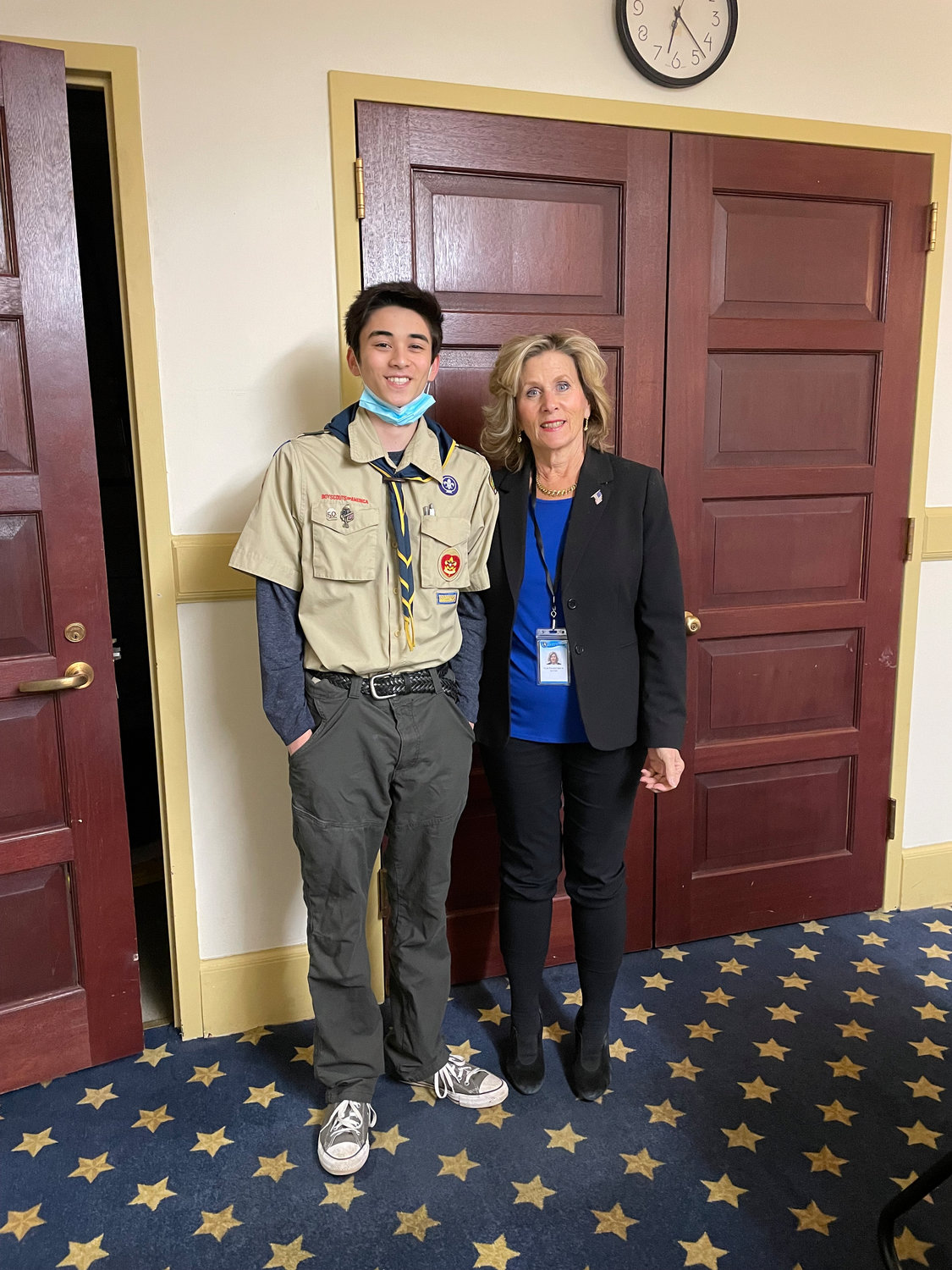 Rion Weber met with Mayor Pamela Panzenbeck to discuss the donation of funds on Jan. 18 for his project, Patriots Trail.
Rose Melillo
By Letisha Dass

Across Glen Clove veteran monuments can be found. But the historical and community significance of each landmark is not known by everyone. Rion Weber, a 17-year-old Port Washington student from Paul D. Schreiber Senior High School and Eagle Scout of Troop 7, has sought to shine an original spotlight on the issue with his Eagle Scout project, the Patriots Trail.

“When I stood in front of these monuments, I saw countless veterans, fallen veterans, being honored on them,” Weber said. “I was clueless to what purpose they had and why they were there in the first place. I wondered if others felt the same way.”

Weber recently pitched Patriots Trail to the Glen Cove City Council for funding during the pre-council meeting on Jan. 18. To maintain the website, pamphlet, and patches for the project, Weber needs $2,000 in donations by Feb. 5. Mayor Pamela Panzenbeck and members of the council have offered their support.

The Patriots Trail is a virtual guide to six Glen Cove monuments: the Landing Veteran Monument, the Doughboy, the Civil War Monument, WWI Monument, the Dan Daly Monument  and the Service Rolls of Veterans of St. Rocco’s.

“Living in Glen Cove my whole life, I know where all of those monuments are, but they are kind of in these little residential areas. Unless you live there, you really would not have a reason to walk by,” Glen Cove Councilman Kevin Maccarone said. “What he came up with was an excellent idea.”

By scanning QR codes on Weber’s pamphlets, visitors and fellow Eagle Scouts would be sent to the project’s website stating the location, date of origination, historical or community significance and fun facts for each landmark.

“The restaurants, since quarantine, have no more menus or most of them do not have any menus. They have QR codes on the desk or the table,” Weber said. “So, I thought, why not implement that idea to monuments and have people learn about the history and importance about all of them.”

“You can now spread this information to people that may not have another reason to walk by but love history,” Maccarone said.

All information on the website was from Weber’s research at the Glen Cove Public Library’s history room archives. As an educational exercise, Eagle Scouts would be able to earn a patch, designed by Richard Maccarone, by visiting the monuments and using Weber’s website. The activity would be coordinated by the Glenwood American Landing Legion at $12 a scout to participate.

Residents and visitors of Glen Cove can access the Patriots Trail. And the City Council has planned to upload the link to spread awareness of Weber’s project.

“We have always gone out of our way, and we are planning to go out of our way for Rion, as far as doing whatever we can to spread the word and helping him get the funding that he needs,” Maccarone said,

Weber aspired to receive enough funds to finish the platform by his 18th birthday on Feb. 5, when his time with the Eagle Scouts as a youth member would be over, so it would continue after him. His aim was to promote visitation to Glen Cove veteran monuments and educate the community about the importance of history.

“My main goal for this project is to help bring back history to life,” Weber said. “I started this kind of late, but I am trying to get this done the best I can.”