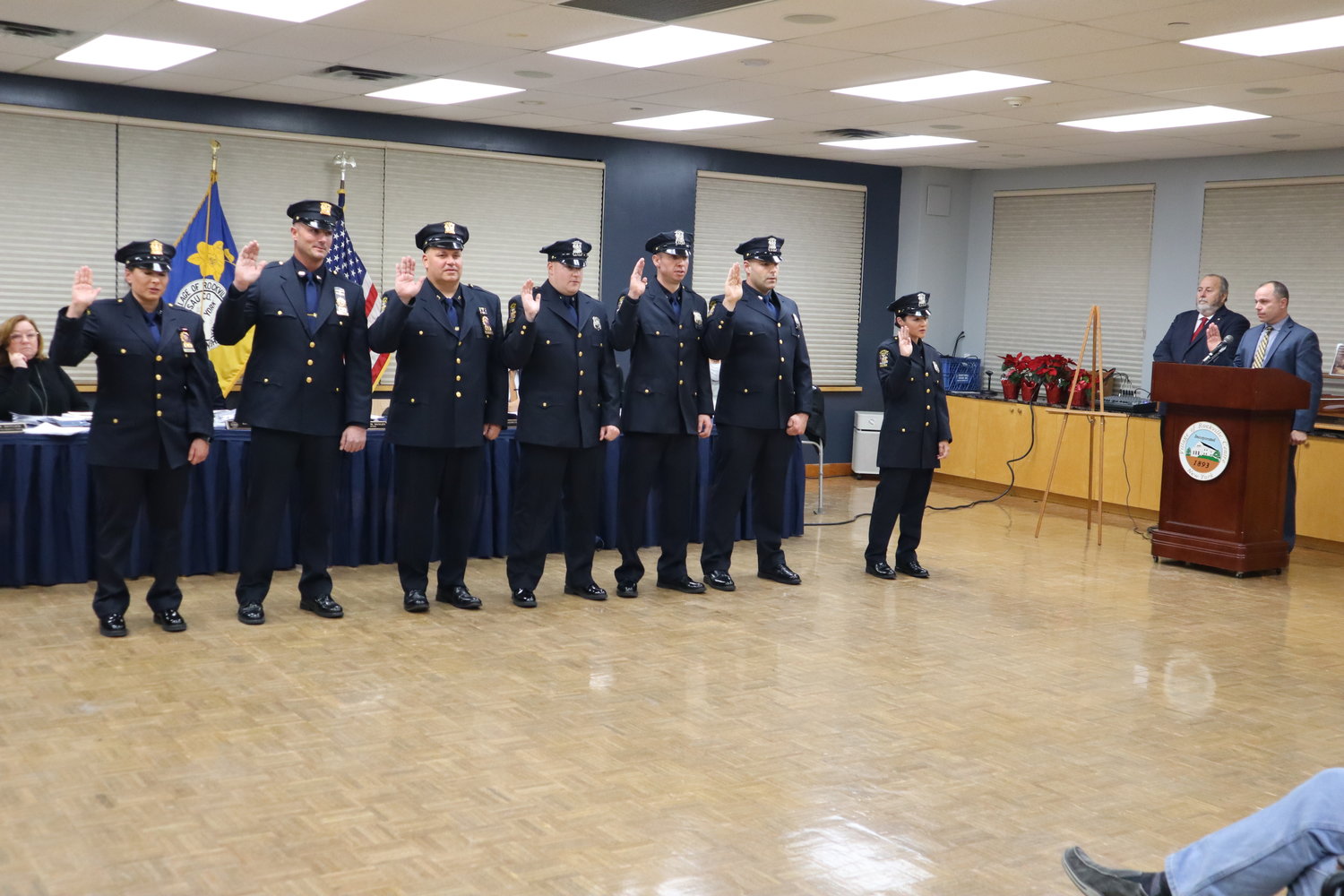 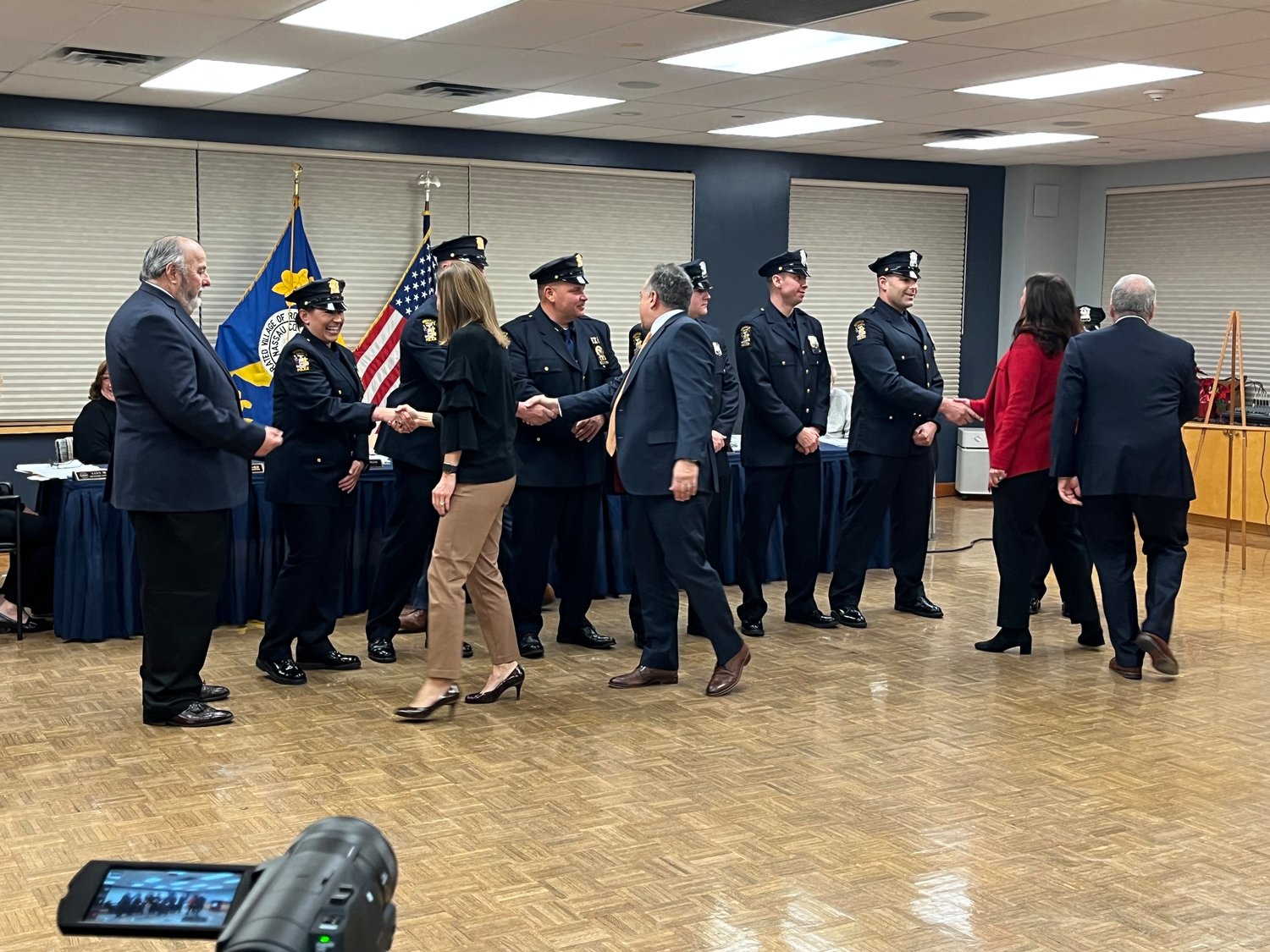 Mayor Francis Murray said that when he was elected 11 years ago, there were 52 officers on the force. “Times have changed, and we recognize that,” Murray said. “We believe in policing in this village. This board believes in policing.”

Thanks to its robust police force, he said, the Village of Rockville Centre is now the 18th-safest village with a population of 25,000 or more in the U.S.

On Monday, the new officers and detectives were sworn in before the village board. “Tonight it’s my pleasure to swear in seven deserving members of our department,” Police Commissioner James Vafeades said, introducing each of them.

Detective Stefanie Balos, 32, came to the RVCPD in 2015 after graduating from Queens College with a degree in psychology, which she puts to good use as the department’s youth officer. Balos investigates any and all issues impacting the lives of children in the village, coordinating her efforts with local schools and parents. She will continue in this role as a detective.

Detective John Murphy, 38, has been a member of the department since 2014. Before that, he saw combat as a member of the U.S. Marine Corps, where he served tours in Iraq and Afghanistan.

Murphy was a police officer in Ocean Beach and Westhampton before coming to Rockville Centre. Since then he has been a member of the Traffic Enforcement Unit and the Firearms and Training Unit, and currently works in the Anti-Crime Unit, where he will remain as a detective.

Detective Dominic Scicutella, 48, has been a member of the village force since 2013, after attending Dowling College and serving as a New York City police officer.

In Rockville Centre, Scicutella has worked in the traffic unit, and most recently in the Anti-Crime Unit.

Officer Nordwing Veszter, 36, came to the U.S. from Romania, and went to work as a patrol officer with the New York City Police Department. He joined the village force earlier this year and has continued focusing on learning English, which he accomplished in just two years. He graduated from John Jay College with an undergraduate degree and a master’s in criminal justice and will be a patrol officer in Rockville Centre.

Officer Michael Boncore, 36, was born and raised on Long Island and joined the department earlier this year, after a stint as a deputy sheriff in the Suffolk County Sheriff’s Office. Boncore, who previously worked in Central Islip’s 1st District Court, will also be a patrol officer.

Officer Travis Nardello, 31, was born and raised in Holbrook, where he attended Sachem North High School before studying criminal justice at Suffolk Community College. Nardello was a police officer with the NYPD for six years before joining the Rockville Centre department, where he will work the night tour as a patrol officer.

Giacchina joined the village’s patrol unit after serving as an officer in the State Police Department at Stony Brook, where she was also assigned to the patrol unit.

Vafeades pointed out that in the past week, thanks to the quick response of local police officers, the department apprehended a suspect in two recent residential burglaries on the north end of town.

“I don’t want you to think that because of the crimes this past week, that crime is up,” Vafeades said. “In fact, crime has actually decreased since last year in many areas.”

With the addition of the new officers and detectives, the commissioner said, he was hopeful that the number of crimes would continue to drop in the year ahead.

He also urged residents to remember to lock their homes’ and vehicles’ doors, because most of the crimes that have occurred recently have been crimes of convenience, and it is important to try to prevent them before they happen.