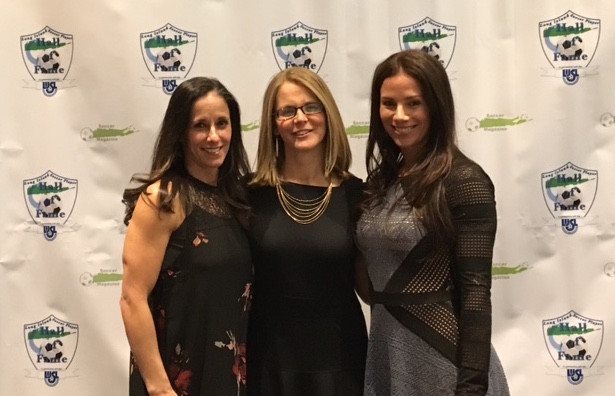 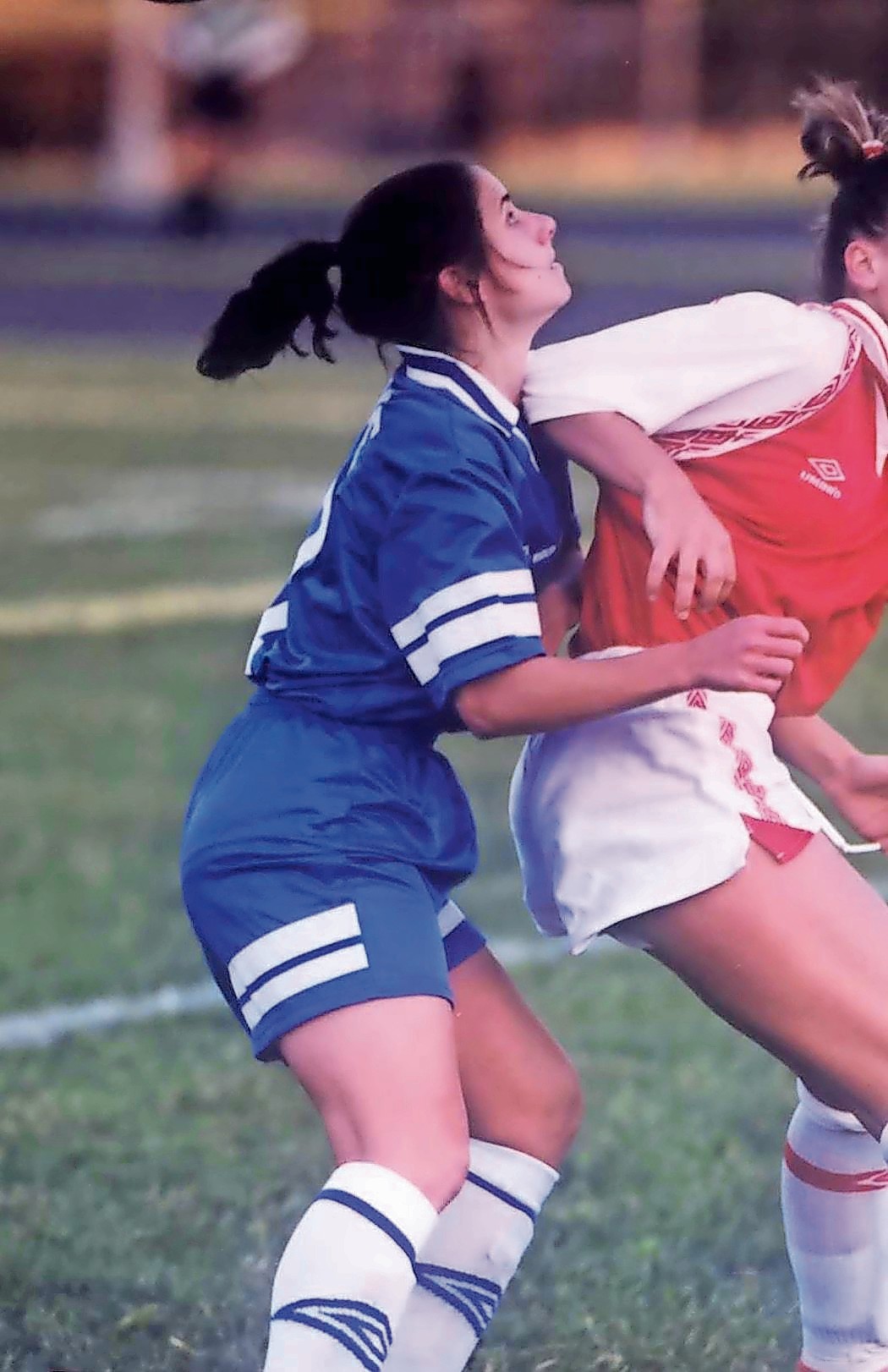 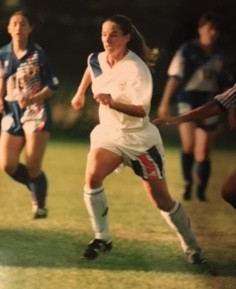 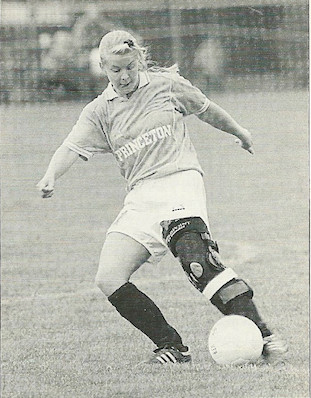 Dina Grossman Case, Traci Sofsian Maier and Kim Conway Haley did it all on the soccer field together. Each was instrumental in South Side High School’s first-ever state championship nearly 30 years ago, and helped guide the Long Island Lady Rough Riders to a win in the inaugural United Soccer League W-League title game in 1995.

With all that success, it was only fitting that the trio came together once again to share one of the highest honors a local athlete can receive.

Case, Maier and Haley became the three newest members of the Long Island Soccer Player Hall of Fame during a ceremony at the Hilton Huntington Hotel in Melville on March 4. Fellow Lady Riders Caitlin Connolly, Laura Martin, Gina Tucker and Christie Welsh were also inducted as part of the first all-female class.

“Kimmy and I were super close,” Maier said of Haley. “We played travel together, we played select teams together, we played high school together and played on the Rough Riders after college. We have a long history. [Dina] was definitely a role model to me. She was someone who I looked up to.”

Case, 46, and Maier and Haley, both 44, all grew up in Rockville Centre, and played on various youth teams and clubs before joining the South Side Middle School team and, eventually, the high school squad under coach, Bob Bigelow.

In 1986, five years after the girls’ soccer program started, the team advanced to the Class B finals, where it lost 1-0 to Pittsford Mendon. Case, then a junior captain, was named to New York’s first-ever All-State team. Maier and Haley were freshmen.

“It was a big disappointment, because we really felt we were the better team and that the other team got lucky,” said Case. “In ’86, it was more we couldn’t finish.”

The team was even more determined after that defeat, and made it back to the finals in 1987. On a snowy day in Setauket, the Lady Cyclones got a late penalty-kick goal from junior fullback Mary Egan to defeat Syracuse’s Marcellus High School 1-0 for the school’s first state title.

“It was a strong class across the board, and also a very fun class,” Haley said. “When the girls play for each other, magic happens. There was a lot of great chemistry with ’87.”

Case left for Cornell University, but Maier and Haley helped lead South Side to two more state finals. But the ’87 team is looked on by many as the group that paved the way for what is now a winning tradition at South Side. Since then, the program has won 16 state championships.

“The community was really proud, and the parents, of course, loved seeing this for their own kids,” Maier said. “We were in the paper a lot, and I think it became a phenomenon after that, and almost became understood that it was going to happen.”

Maier and Haley went on to play at Princeton and the University of Virginia, respectively. Maier was voted the Tigers’ MVP in 1993 and made the All-Ivy League team that season. Haley played in four NCAA tournament games with the Cavaliers, and was named a finalist for the Hermann Trophy — the soccer equivalent of the Heisman Trophy — in 1993. The honor went to Hall of Famer Mia Hamm.

Haley also played for the U.S. Under-21 National Team in 1993. That season she earned a silver medal at the World University Games and a gold in the national tournament. The following year, she won another gold medal playing for the Olympic Sports Festival team.

After graduating from college, all three ladies became charter members of the Long Island Lady Rough Riders in 1994. The first season of the league was just a “showcase,” played without a championship game. There was also little funding, so players to trekked from their jobs to practice at Mitchel Field in Uniondale three nights a week and to games on weekends in front of small crowds.

“We had two women who would come from the city taking the train and then the car and getting to practice,” said Maier. “That really impressed me. But we loved it. We wanted to do it.”

The following season, the Lady Riders went 9-1 and beat Cincinnati in the league’s first championship team. Case and Maier remained with the team after that, but Conway left for Puck Deventer in the Netherlands.

The team went 9-1 again in the 1997 regular season, and survived two shootouts, against California and Chicago, in the playoffs to win the championship. Back then, shootouts were 40-yard, one-on-one matchups between the shooter and goalie, instead of the penalty kicks used today.

“1997 was a lot more adversity,” said Case. “I just remember every game being a tough match. We didn’t take anything for granted.”

The Lady Riders then shocked the soccer world in 1999 by defeating the Brazilian Women’s National Team, 2-0, in an exhibition match. The Brazilians went on to finish third at that year’s World Cup.

“I don’t know if we caught them by surprise or not, but to beat a team of that caliber that goes on to place third in the World Cup [was special],” said Case. “I think it spoke a lot about the talent, because there were a lot of homegrown girls from Long Island [on the Lady Riders].”

Case briefly left the team in 2000 to have her first child, but returned for two more seasons before retiring after the 2002 campaign. She played in 102 games for the Lady Riders, the third-most in franchise history.

Maier still lives in Rockville Centre with her husband, Larry, and sons Finn, 12, and Luke, 10. She teaches AP physics and psychology at The Wheatley School in Old Westbury and coaches Luke’s youth soccer team.

Conway also lives in the village with her husband, Ethan, and daughters Reese, 11, and Viviana, 8. She works for Condé Nast in Manhattan, and coaches travel soccer and lacrosse in the village.

Case lives in Charlotte, N.C., with her two children, 16-year-old son Zachary and 13-year-old daughter Jordyn. She was recently named manager of membership development and administration for the National Premier Soccer League.