For many residents, Catholic education runs in the family 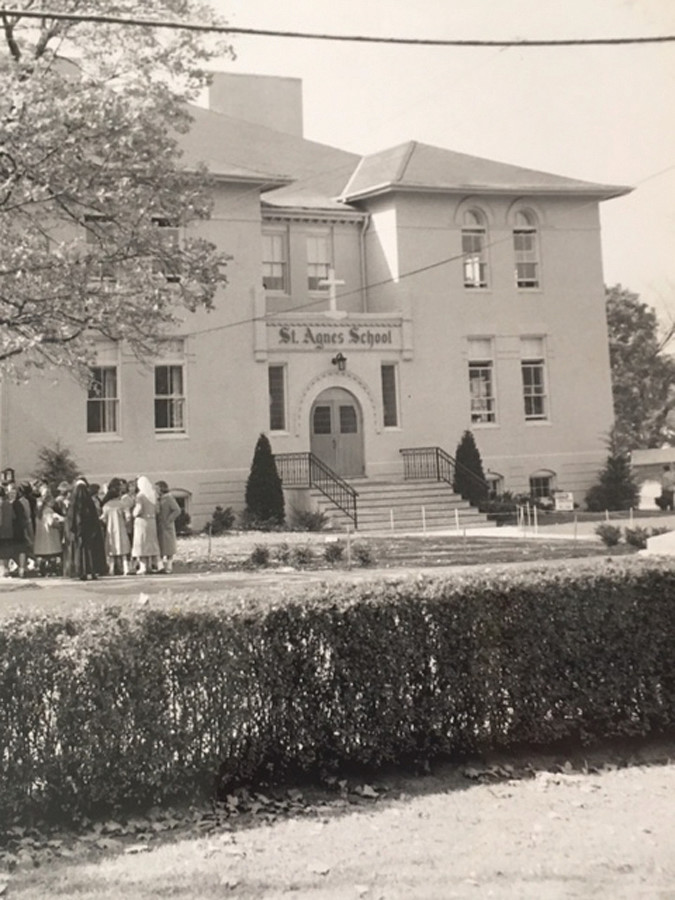 St. Agnes, pictured decades ago, originally sat on Quealy Place, but switched locations after the school purchased and moved into the Clinton Avenue School in 1957.
Courtesy Helen Newman 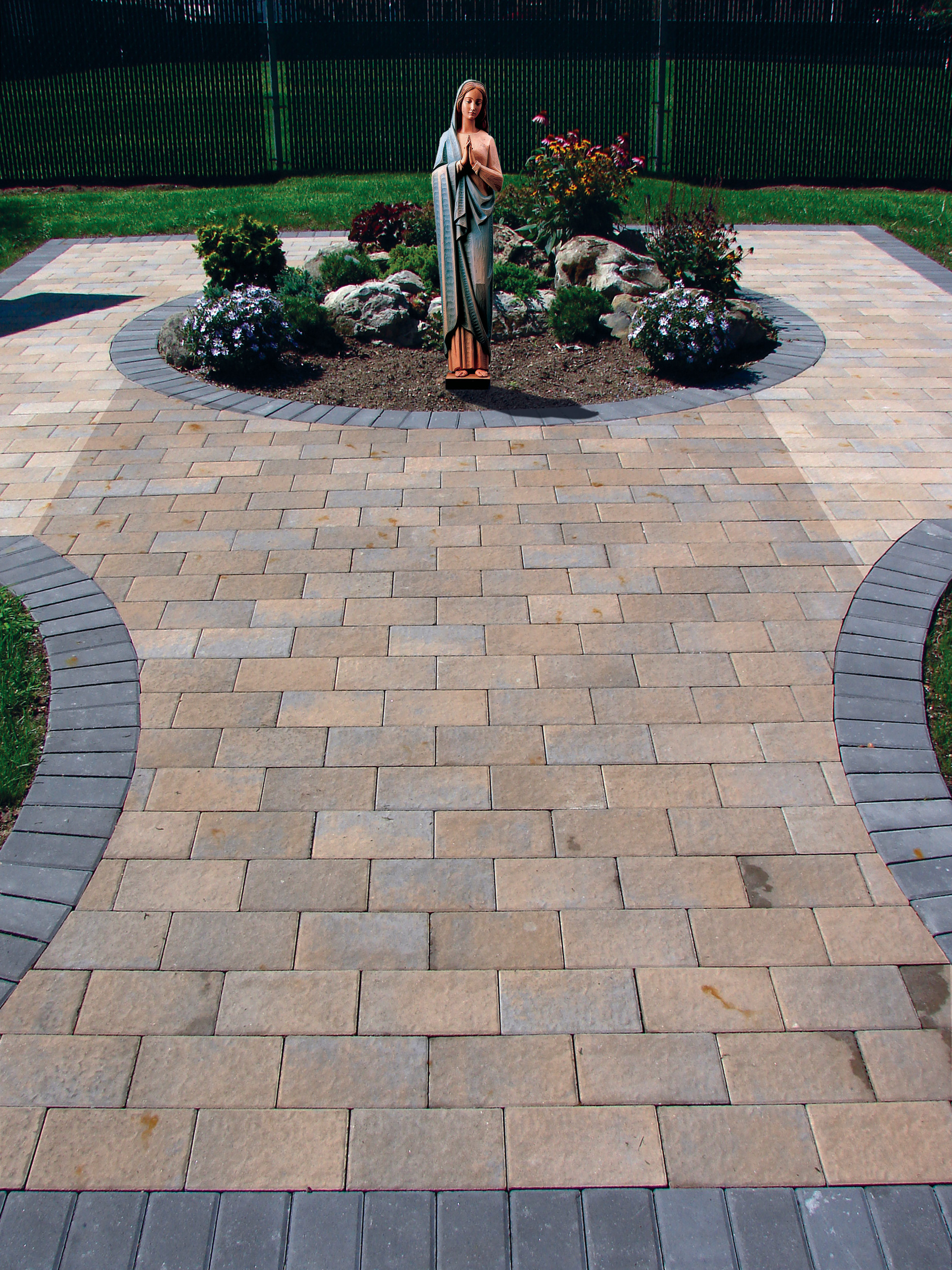 A centennial prayer walkway is being built, and people can purchase bricks and have them inscribed. Above is a rendering of the statue that will adorn its garden.
Courtesy Gary Layton
Previous Next
By Ben Strack

As Rockville Centre’s St. Agnes Cathedral School prepares for its 100th anniversary celebration this year, two of the women who helped the institution become what it is are leading the charge.

In 1974, Sister Kathleen Carlin came to the school, which serves students in kindergarten to eighth grade, as a guidance counselor. By 1977, she had been appointed principal. She and Helen Newman, who worked alongside Carlin for decades, retired last year, and have been co-chairing a committee dedicated to commemorating the last 100 years.

“We really want to celebrate all of our achievements, and they’re anxious to do it, because they’re still here,” Newman said, referring to the committee, which comprises about two dozen former staff and alumni, including Rockville Centre Mayor Francis X. Murray.

“It was a very special place for me to go to school,” Murray said. “I loved the nuns teaching us. They were tough, but some of us needed that. I certainly did.”

His five children and one of his grandsons are also graduates, and he has two more grandchildren attending the school now.

“Rockville Centre has wonderful options for schooling,” Murray said. “My parents wanted me, I believe, to go to a Catholic school to get a religious background, and I’m very happy and glad that I did do that, and I wanted the same for my children as well.”

Monsignor Peter Quealy built the school in 1917, on the site of what is now St. Agnes Cathedral’s rectory. It had 10 classrooms in its early years, but the demand for Catholic elementary school education grew in Rockville Centre by the 1950s, and in 1957 — the year the Diocese of Rockville Centre was established — the school purchased the Clinton Avenue School, behind the cathedral, from the Rockville Centre Public School District. Wings were built on each side of the structure, which are now known as Carlin Hall and Newman Hall. At its height, the school, which began with 60 children, had about 1,600 students in 32 classrooms.

Carlin remembered first coming to St. Agnes — which she said had a certain prestige in the diocese — with a motivation to keep it academically challenging as well as welcoming.

“We had a reputation, and at one point we had over 900 kids, of being [able] to call [all] of our kids by name,” Carlin said. “That was something we prided ourselves on, because it was really important that the kids felt that we knew who they were, and we did.”

The children knew them, too, said Newman, who began working at St. Agnes as a social studies teacher and soon became the assistant principal before joining Carlin as a co-principal in 1999. She said she constantly runs into people around the village who recognize her and say hello.

“One of the unique things that we were able to really experience during all those years was, we saw families coming back,” Newman explained. “At this point, we know three generations. … We knew the grandparents, we knew the parents, because they were students, and now we have their kids, and I think that was a real gift.”

Carlin and Newman have seen tremendous change at St. Agnes over the years, and were responsible for much of it. They founded the kindergarten program in 1980, and also began a drama and sports program for middle-level students. Other major changes, according to the former co-principals, include introducing technology, including iPads and Smartboards, and the shift from nuns to lay teachers. In 1990, the school was recognized as a School of Excellence by the U.S. Department of Education.

As St. Agnes evolved, it held its principles, including its motto of “accepting Christ today in one another.” “We always used to say, if you’re too busy for God…,” Newman began. “If you started that, [the students would] be able to say, ‘You’re too busy.’”

Alumni remain a part of the school today. Patricia Wren, who, like Murray, graduated from eighth grade in 1965, returned to work there as a secretary, which she has done for 22 years. Her four children attended the school, and she hopes her grandchild in Rockville Centre, currently in pre-kindergarten, will as well.

“When I came back to work here, it was just as if I came home,” Wren said. “It’s just a real sense of family, a feeling of belonging. It’s just very comfortable.”

A Mass to commemorate the 100th anniversary will take place at the cathedral on Sunday at 9:30 a.m., and will kick off the months-long celebration. A gala and generational Mass will be held in February, and a party on the school’s “Field of Dreams” will feature a 3-kilometer race and the opening of a time capsule from St. Agnes’s 75th anniversary. The school is also creating a centennial prayer walkway, and people can purchase bricks to be inscribed.

Though many Catholic schools have closed over the years due to financial problems and declining enrollment, St. Agnes continues to survive with the help of parish families and other donors.

Its long history has created many memories for those who have learned, played and worked at the school, such as Murray, who first noticed a girl, who is now his wife, there in seventh grade. They married on St. Patrick’s Day in 1973.

“We just noticed each other walking in the halls and the cafeteria, and there was a spark at 14 years old,” Murray said, chuckling. “She’s still my best friend, and I still love her.”