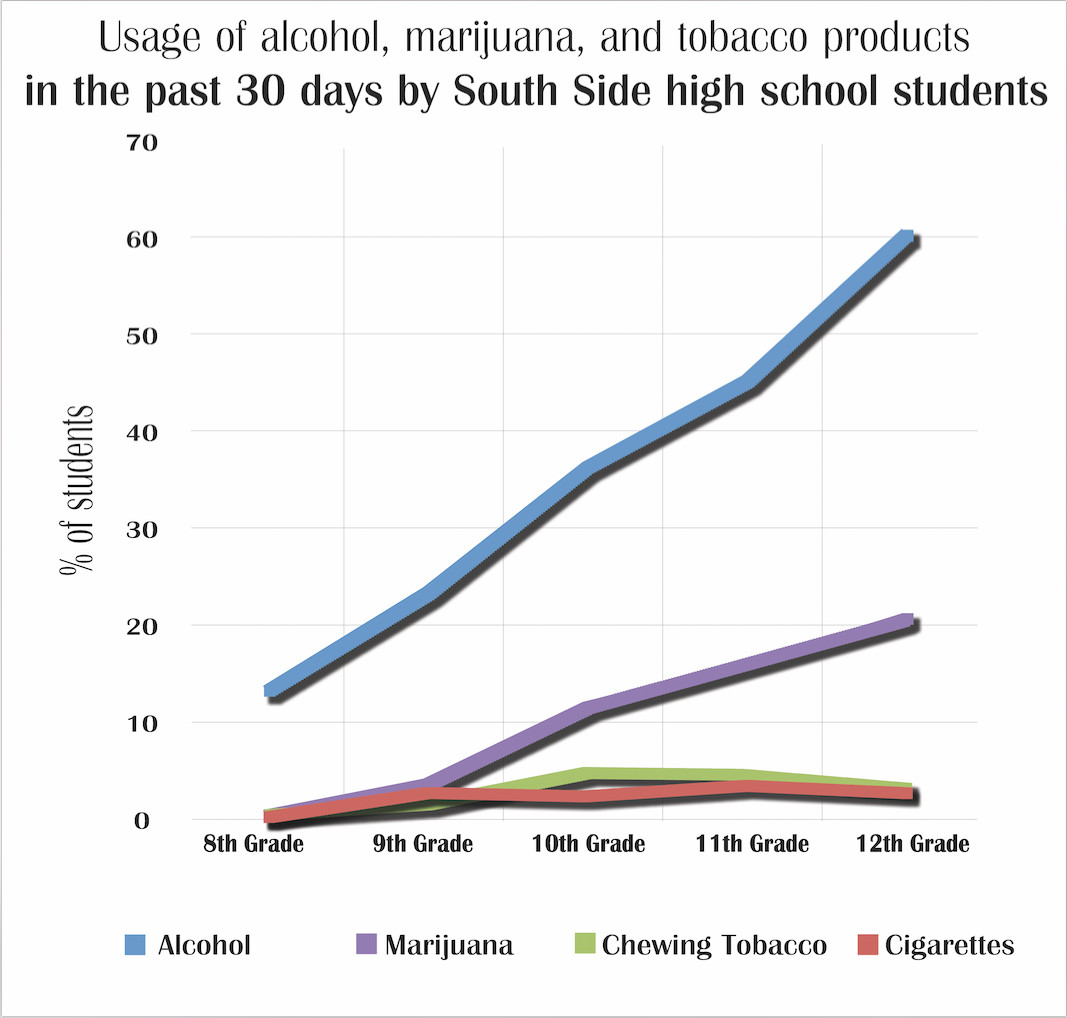 These findings are from a spring 2017 survey.
Christina Daly/Herald 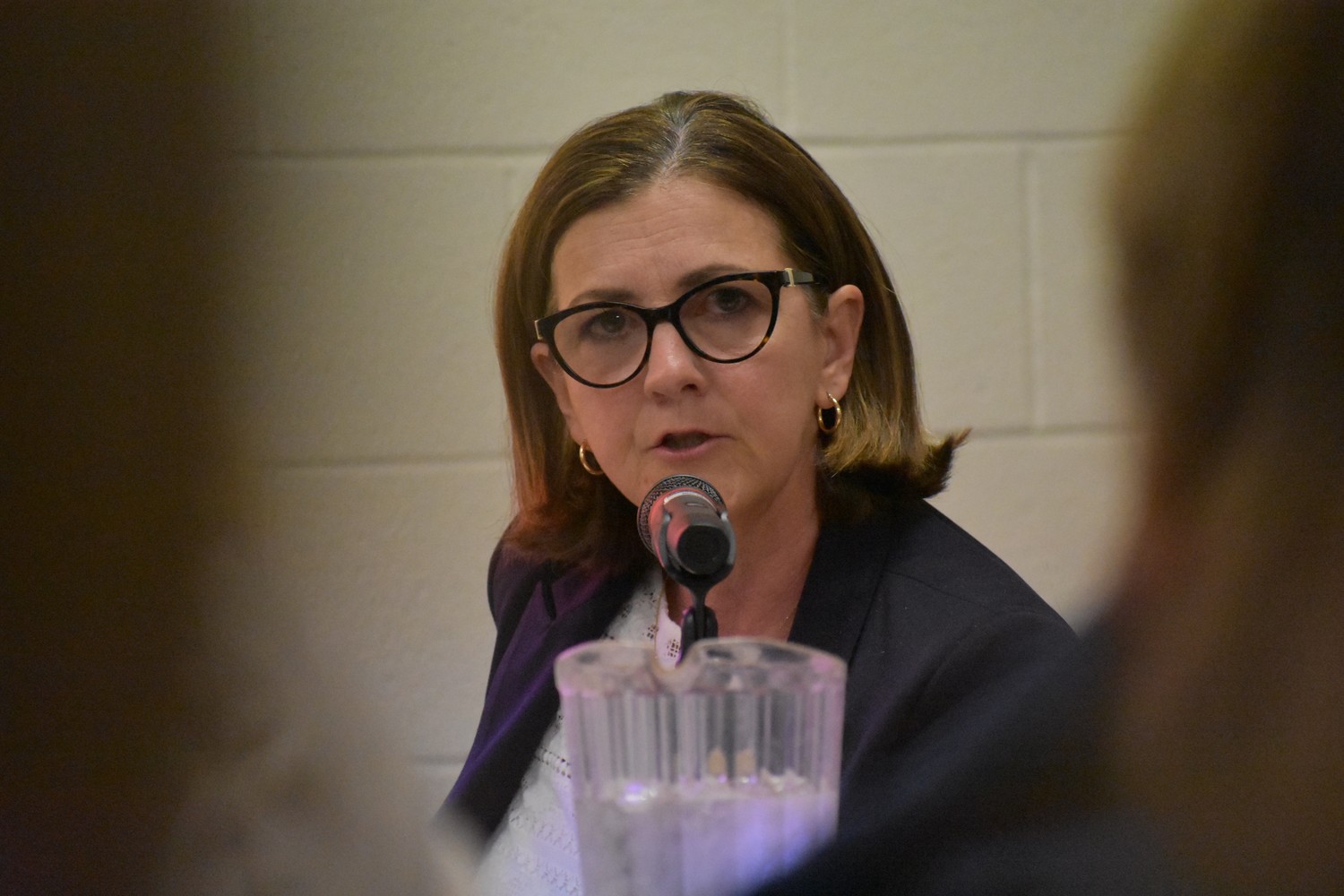 Noreen Leahy, assistant superintendent for pupil personnel services and special education, who also oversees the school district’s drug, alcohol and violence prevention task force, presented the findings at a Board of Education meeting on March 14.
Ben Strack/Herald
By Ben Strack

Though less than 3 percent of those surveyed said they would look cool if they smoked, nearly 30 percent indicated there’s a good chance they would be considered cool if they drank.

“You can really see that we have done a really good job . . . that smoking is dangerous and deadly, particularly for young people,” said Noreen Leahy, assistant superintendent for pupil personnel services and special education, who also oversees the school district’s drug, alcohol and violence prevention task force. “I’m not sure we’ve gotten the same message out about the drinking.”

The district’s task force received a “booster shot,” according to Leahy, when it became a part of the Coalition for Youth, which formed in 2014. The following year, the coalition was given a five-year, $625,000 grant from the White House Office of National Drug Control Policy’s Drug-Free Communities Support Program.

The Rockville Centre Coalition for Youth released the findings of the New York State Youth Development Survey — conducted last spring — at the Board of Education’s meeting on March 14. More than 1,100 students in grades eight to 12 completed the questionnaire, which measures alcohol and substance abuse and is designed to help assess risk and protective factors to predict such behavior.

The survey is a way the federal government checks to see whether community-based programs to curb drug and alcohol abuse, such as those in Rockville Centre, are working. Before the 2017 survey, students took one in 2014, and are slated to take another survey next year.

“These questions are very personal,” said South Side senior Lily Coll, co-president of the Coalition for Youth, who added that the students take the survey seriously. “I believe that from the numbers that we see and from what I know about being in school around my peers, they’re correct.”

About 77 percent of seniors reported drinking alcohol at least once, which Leahy said was “alarming.” Fewer students in grades nine to 11 reported using alcohol in the past 30 days, while a slight uptick — by about 2 percentage points — was seen in that category among eighth-graders and high school seniors. The percentage of students who have binge drank — drinking to become intoxicated by consuming several alcoholic beverages in a short amount of time — decreased slightly among all grade levels except 12th-graders, who showed an increase of 4.5 percentage points, accounting for half the class.

Ruthanne McCormack, project coordinator for the Rockville Centre Coalition for Youth, said she was happy with the reduction in alcohol use overall, but that there is more to be done.

Among the troubling findings, Leahy and McCormack noted, were that 27 percent of students reported having had five or more alcoholic drinks in a row at least once; 72 percent said it is rather easy to get alcohol; and those surveyed said that only 30 percent of adults in the neighborhood find drinking wrong.

“The perception of risk and the perception . . . that the parents don’t think anything’s wrong with it,” McCormack said, “I think we need to work on that.”

Encouraging signs included a high percentage of students reporting that they would never drink and drive, and that they acknowledged seeing prevention messages around their school and the community. About 98 percent said there are many opportunities to join teams and clubs in the district.

Amid the national opioid epidemic, 99.9 of Rockville Centre students have not done heroin, according to the survey.

But the school district continues to push the message of the dangers of alcohol, smoking and marijuana by calling in addicts who have learned lessons the hard way, including former NBA player Chris Herren, who was set to speak at South Side High School after the Herald went to press on Tuesday about his struggle with addiction.

“They all started with alcohol and marijuana use,” McCormack said of current and former addicts. “I think it’s important for everyone to understand that alcohol can definitely lead to very bad drug use for these kids.”