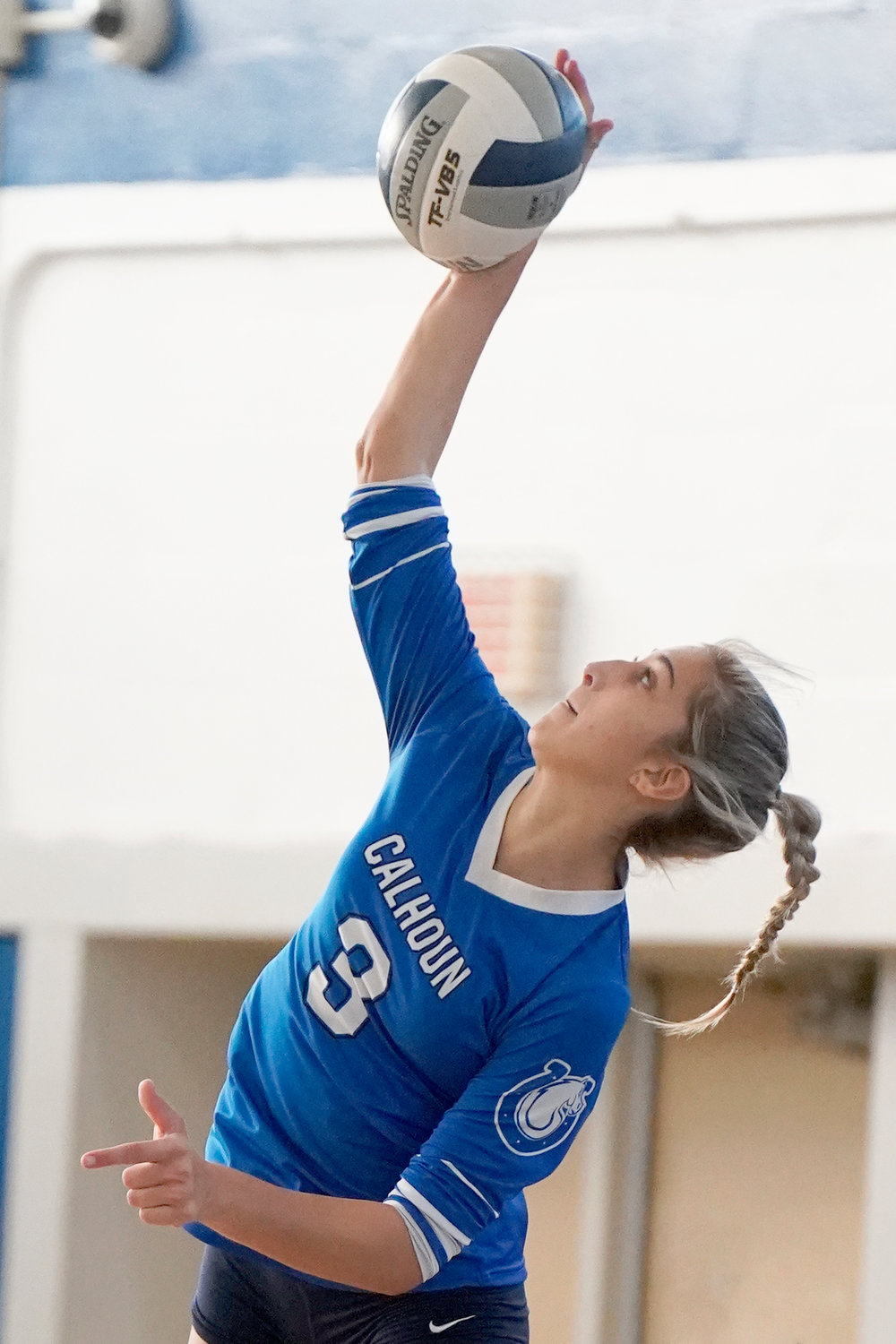 Senior outside hitter Julia Lawrence led all of Nassau in kills last fall and is a catalyst for Calhoun’s county title hopes.
Ron Manfredi/Herald 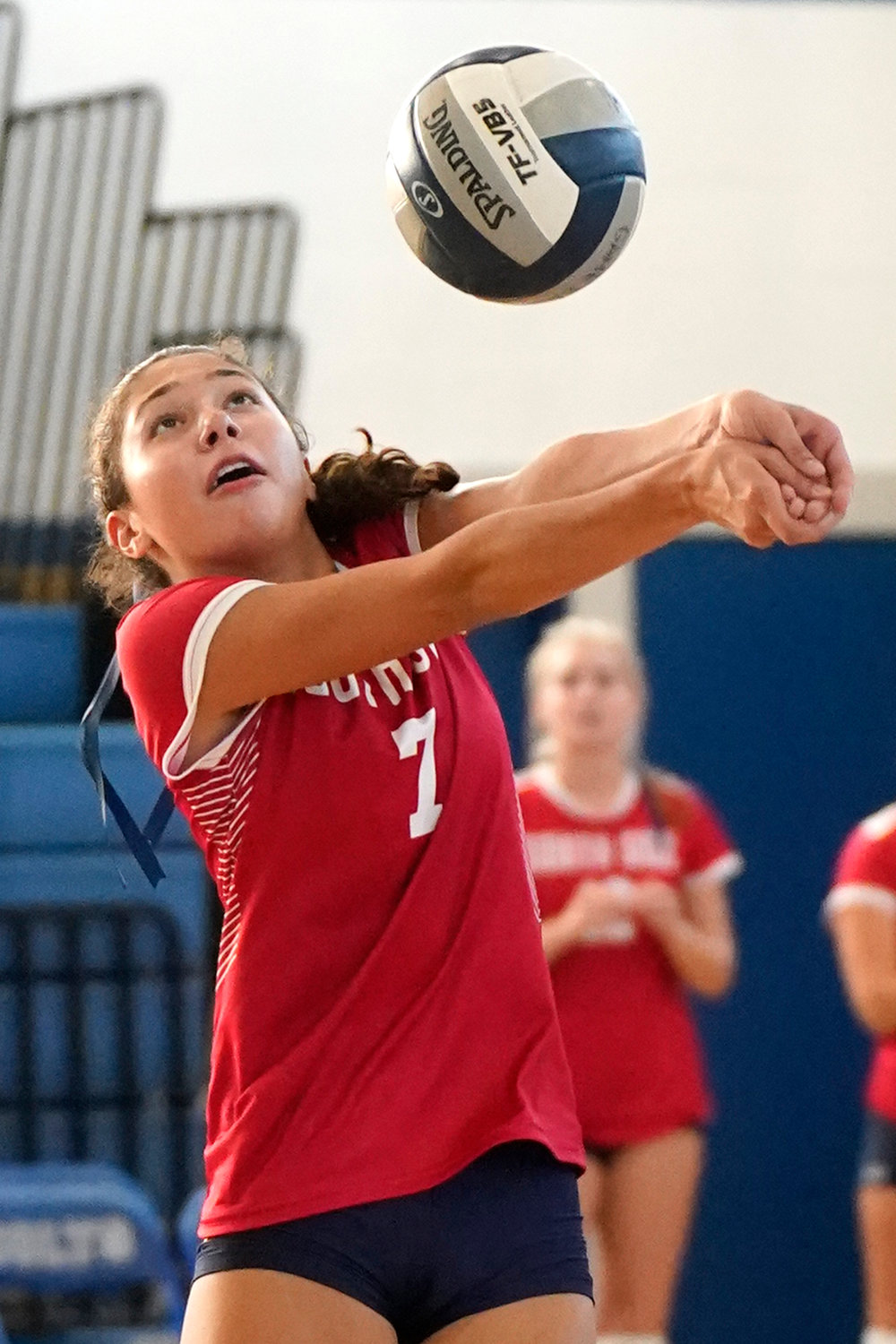 Junior outside hitter Sofia Vargas is a key part of an overall young and talented roster for South Side.
Ron Manfredi/Herald
Previous Next
By Tony Bellissimo

Coming off an underdog run to the Nassau Class A girls’ volleyball finals last fall, Calhoun has busted out of the gate with five straight conference wins and a couple of first-place tournament finishes behind the dynamic duo of seniors Ella Maldonado and Julia Lawrence.
The Colts might be the team to beat this season but have a long list of challengers led by defending county champion Wantagh, Mineola and South Side. They defeated South Side 25-17, 25-15, 25-19 on Sept. 22 and have Wantagh and Mineola on deck.
“We like the pressure,” Lawrence said of the perception Calhoun is the favorite to go all the way. “We’ve been working for a county championship since we were freshmen and it’s something we’ve always wanted. We have a group that’s really hungry and confident.”
South Side, which fell to Calhoun in the semifinals last fall, was a little shorthanded for this season’s first meeting as senior Ava Kelly, one of its five returning starters, saw barely any action after spraining an ankle earlier last week. Still, the Cyclones (4-1) had their moments with juniors Keira Birk, Sofia Vargas, Delia Ryan and Cate Bradley, and sophomore Cate Cammalleri leading the charge.
“It’s still early and we have some work to do,” said South Side coach Cheryl Scalice, whose team has defeated Kennedy, Mepham, Garden City and Manhasset while dropping just one set. “We need to become more consistent and I think that’ll come in time,” she added. “We’ve played some strong matches but today we were out of sync.


“We faced Calhoun in a few tournaments already and knew what to expect. They’re a very tough defensive and serving team.”
Lawrence, an All-County outside hitter with an exceptional jump serve, led Nassau in kills last season with 301 and is looking to play beach volleyball at the highest collegiate level possible. Maldonado is a two-time All-County libero who’s led Nassau in digs in each of the past two seasons and committed to play at Binghamton.
“Nobody expected us to go as far as we did last season except us,” Maldonado said. “We took to the loss to Wantagh pretty hard. The experience was great but we don’t want to feel that way again.”
Headlining the supporting cast for the tandem are junior setter Gianna Lucchi, junior setter/hitter Oliva Katz, junior outside hitter Grace Miller, senior middle Victoria Zovich, sophomore right side Olivia Ruisi, and junior defensive specialist Amelia Secor.
“Ella and Julia are 100 percent volleyball 24/7, 365 days a year,” Calhoun coach Christina Strezenec said of Maldonado and Lawrence. “They’ve been in our program a long time and even in the three years I’m coaching them, they’ve grown tremendously.
“I ask a lot of all the girls,” she added. “They put in a lot of time and sacrifices. Their goal is to win county and I’d be disappointed for them if it doesn’t happen. At the same time, we know how hard it is. All of these teams we’ve beat so far will be much tougher down the road and we have to continue to grow.”