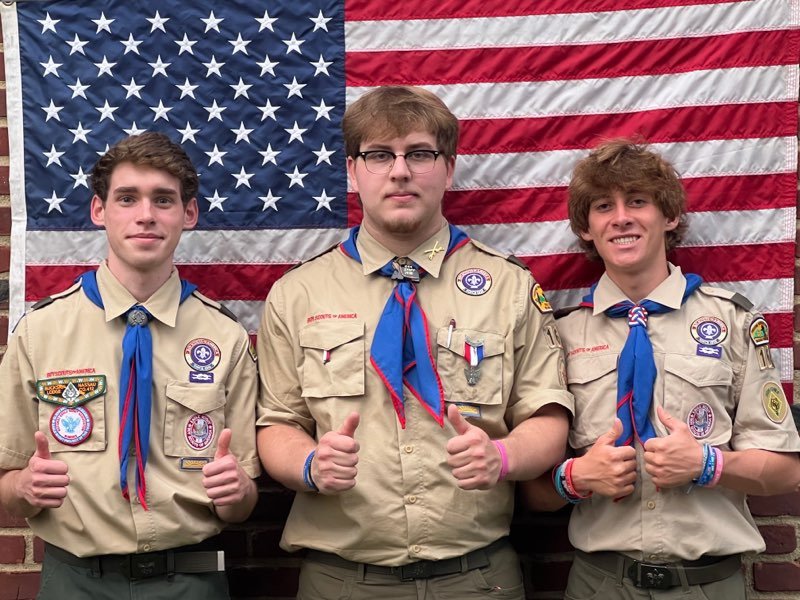 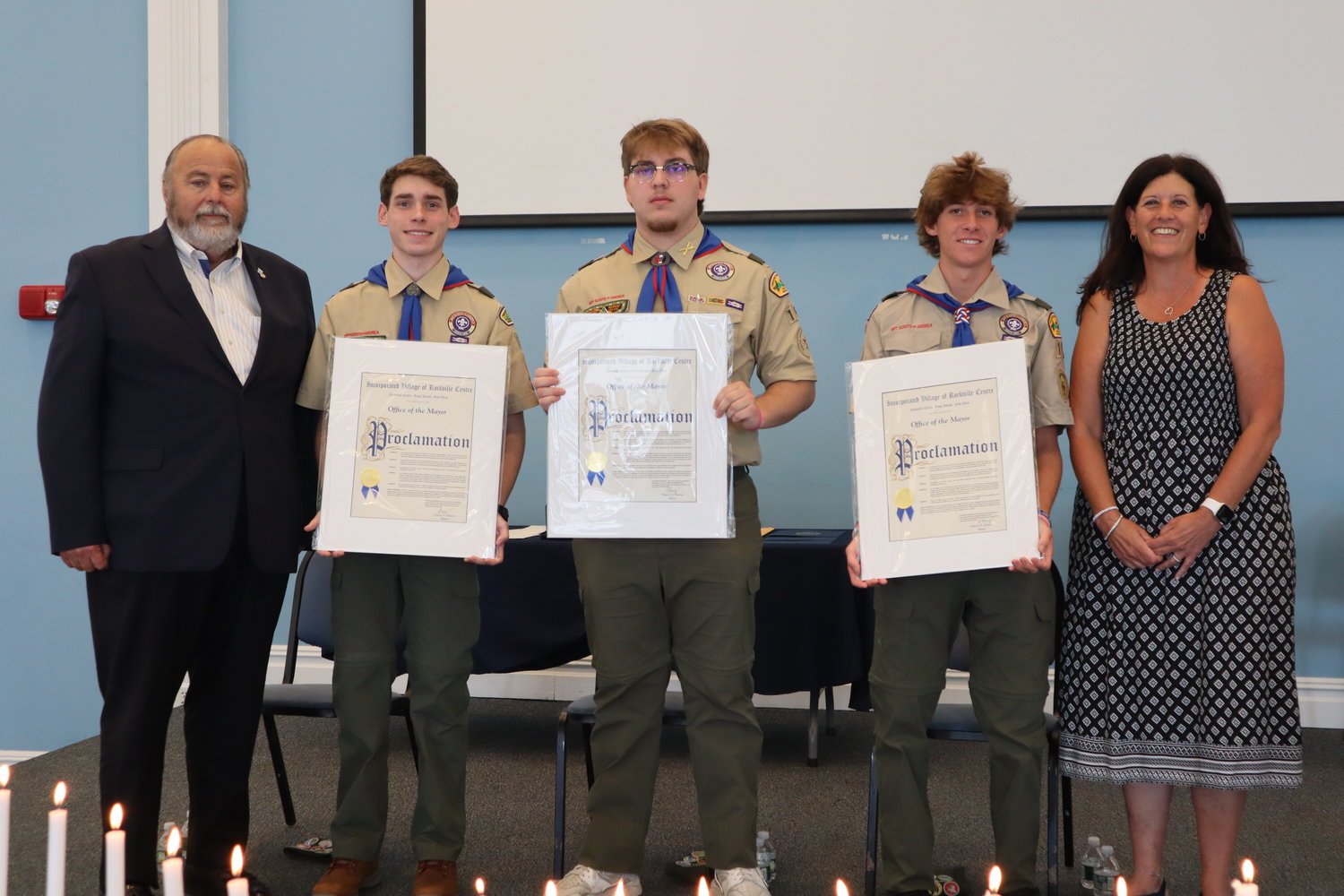 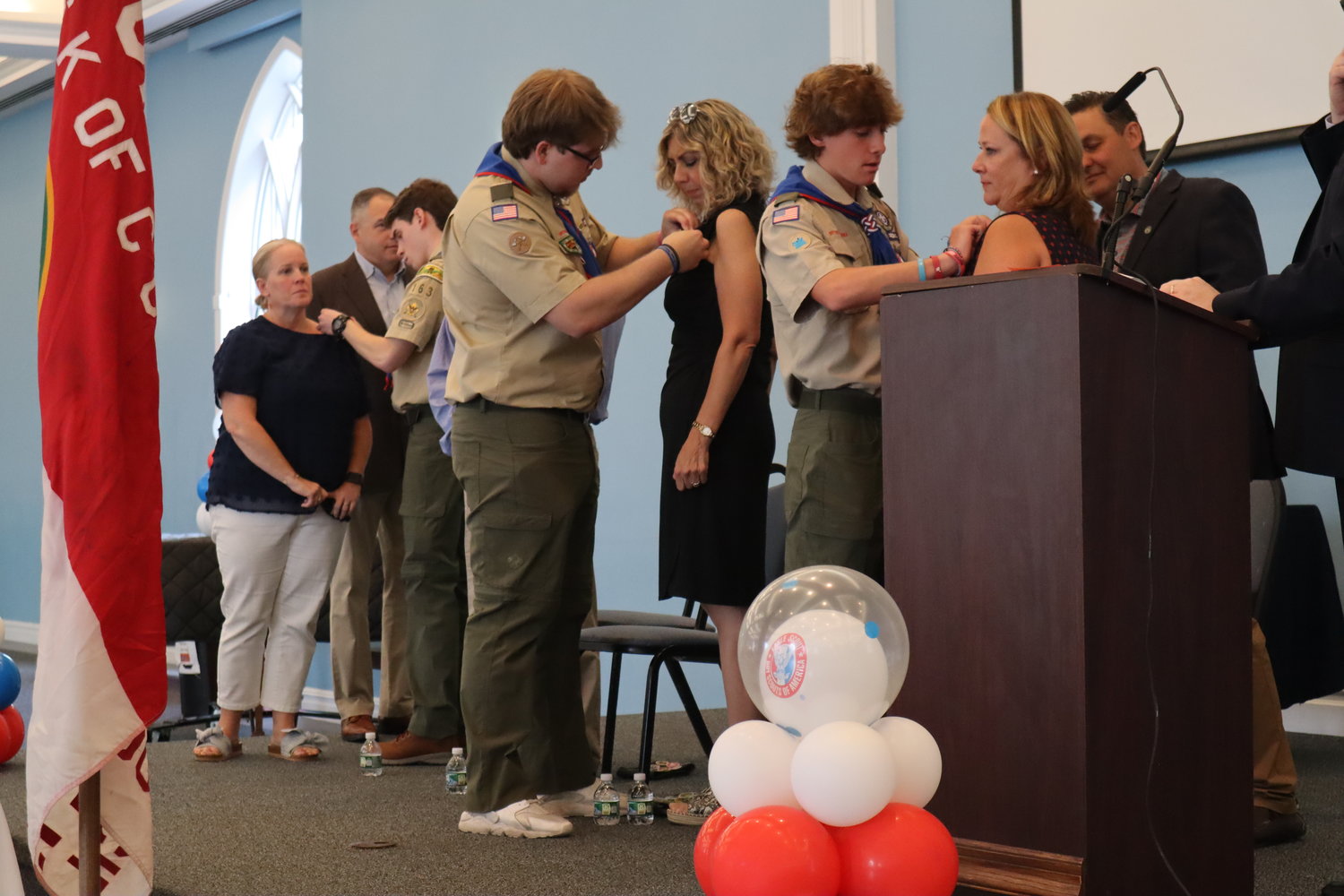 Eagle Scouts presented their parents with mentor pins for helping support and guide them.
Daniel Offner/Herald 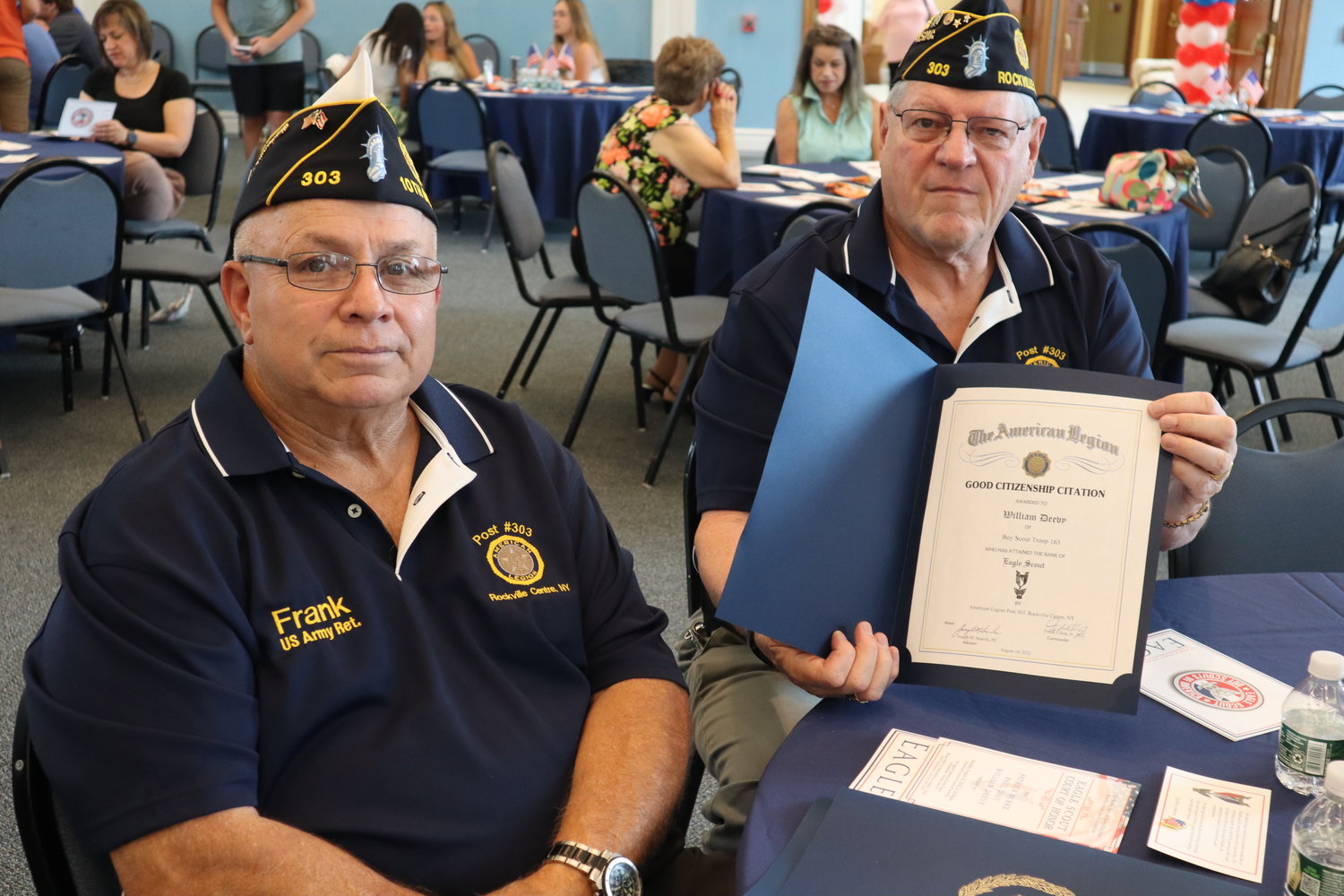 Three members of Boy Scout Troop 163 in Rockville Centre worked tirelessly this year to join the 4 percent of Boy Scouts in the U.S. to earn the Eagle rank.

Patrick Burke, Paul Davi, and William Deevy, who climbed the ranks throughout their scouting careers, were honored at an Eagle Scout Court of Honor last Sunday at the St. Agnes Church parish center.

To become Eagles, they were required to earn a minimum of 21 merit badges, and to plan, budget, coordinate and complete a project that benefited the community, using only donated materials.

“It took a significant effort to accomplish these tasks,” Troop 163 Scoutmaster Jeff Roberts said. “This was no small undertaking.”

For his project, Deevy, who lives in Rockville Centre, built and placed “bat boxes” around the village with the intent of attracting the nocturnal mammals. Most bats are carnivorous, primarily eating insects and other pests, which is beneficial to human health. By increasing the bat population, Deevy hoped to reduce the population of mosquitoes and other insects that breed on or near Hempstead Lake and other bodies of still water.

According to the EcoHealth Alliance, a nonprofit organization dedicated to environmental health and protecting wildlife, one bat can eat as many as 1,200 mosquitoes in an hour. The West Nile virus, malaria, dengue fever and other mosquito-borne illnesses claim roughly 750,000 human lives per year.

Burke's project honored the fallen soldiers of the 69th Infantry Regiment, which has seen combat in four wars and taken part in 23 military campaigns. Burke, from Rockville Centre, built a memorial in Farmingdale dedicated to the 19 members of the New York Army National Guard who died while serving in the 69th Infantry in Iraq.

Drawing inspiration from the existing memorial in the 69th Regiment Armory in Manhattan, the memorial is enclosed in two glass cases at the Co. 1 Battalion 69th infantry, 25 Baiting Place Rd. in Farmingdale, and contains photos of the fallen, flags, battlefield crosses, and information on each of the soldiers.

“My journey is littered with happy memories,” Burke said during the ceremony. “Thank you to all the scoutmasters who followed us on this road, and our families for their support.”

Davi's project also paid respect to local veterans. The 16-year-old, who lives in Rockville Centre, constructed two American flags out of pallet wood to honor the veterans of the Rockville Centre American Legion and the Lynbrook VFW. One of the flags was given to World War II veteran Herbert Rosenberg, a former prisoner of war, at his 100th birthday celebration. The second flag was presented to the Lynbrook VFW at its Veterans Day Memorial in honor of the late Cpl. Patrick Gallagher.

“Scouting provided me with long-lasting friendships and connections,” Davi said. “But you don't realize how much scouting helps you until you have to use what they taught you in the real world.”

Working as a lifeguard, Davi said he recently helped someone who sustained an injury, thanks to his first aid training. He was proud of himself because as a result of his scouting experience, he knew exactly what to do.

At the Court of Honor, the three Eagles presented pins to their mentors for their support and guidance on their projects. Burke singled out Chartered Organization Representative Sean O'Reilly for his wisdom and advice through years of scouting. Davi presented his pin to his father, Dominick, who, he said, helped by setting an example for him to reach his full potential. Deevy presented two pins, the first to his father, for always pushing him to do his best, and the other to Scoutmaster Jeff Roberts for his integrity and guidance.

All three Eagles have been involved in Scouting since first grade when they were Cub Scouts. Burke will be a sophomore at George Washington University in Washington, D.C., where he is studying mechanical engineering. He graduated from Xavier High School, in New York City in 2021, and is looking toward a career in aerospace engineering. Deevy will be a freshman at Boston University in the fall, and plans to studying business. Davi is set to begin his junior year at Xavier High, where he is a member of the swim team and the JV cross-country team as well as the Model UN club. He said he was looking forward to college, and wanted to study medicine.

The three new Eagle Scouts were presented with proclamations from Boy Scouts of America, elected officials, and the American Legion.

“You are the future leaders of this country,” said Rockville Centre Mayor Francis Murray, who, along with Deputy Mayor Kathy Baxley, gave them each a special citation from the village.

Assemblywoman Judy Griffin also presented the honorees with a citation from the state. “I am so proud of these impressive young men who served our community in impactful ways, have been role models to their peers, engaged civically, and dedicated themselves to scouting,” Griffin said in a statement. “I am grateful to each of them for their diligence in completing unique Eagle Scout Projects that recognize veterans, pay tribute to our fallen military, and help our environment.”