Seek to break ground faster by splitting project into phases 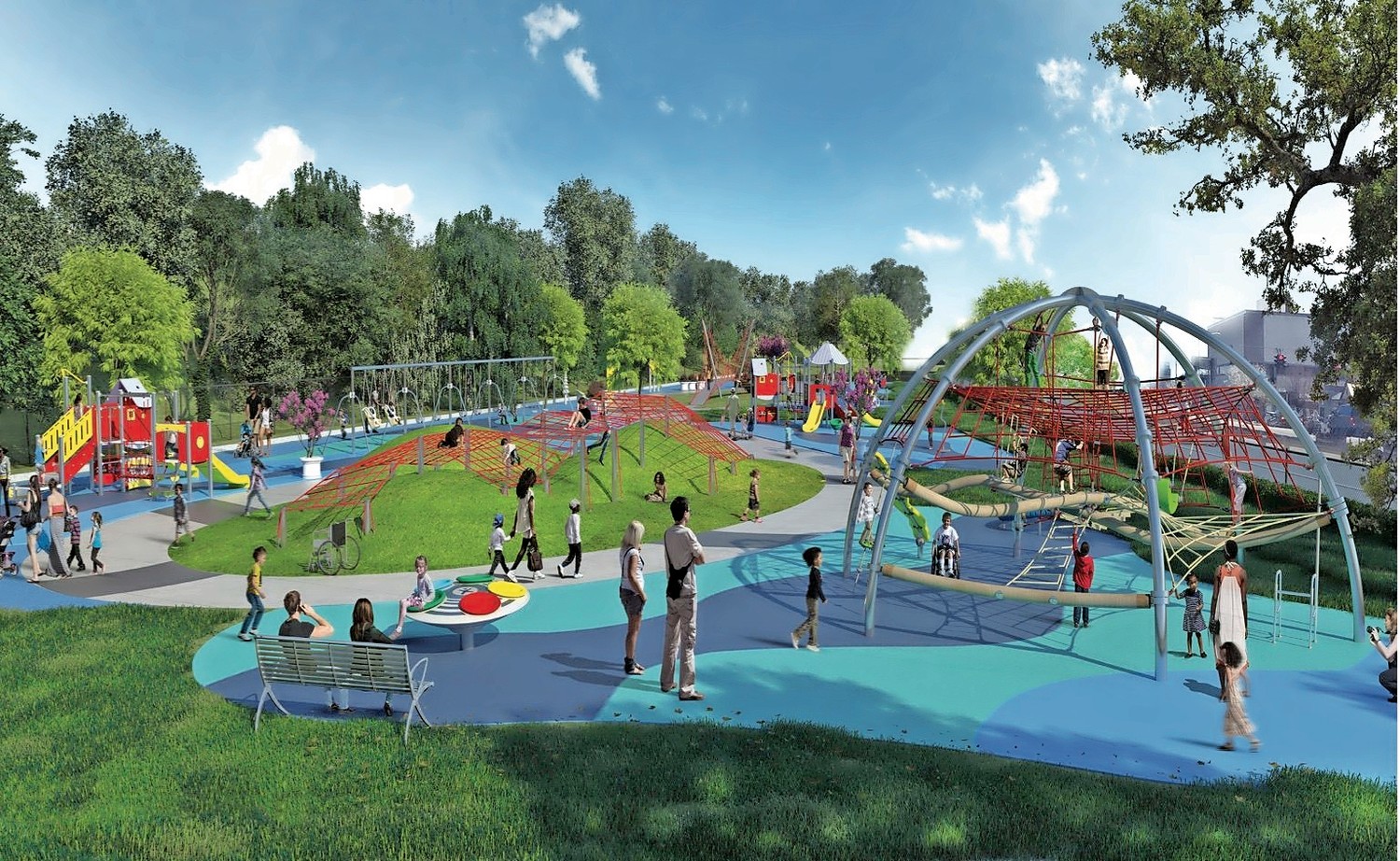 The planned inclusive playground on Hickey Field would feature climbing cargo nets, a suspension bridge, musical equipment and other structures for kids of all ages to enjoy.
Courtesy Village of Rockville Centre 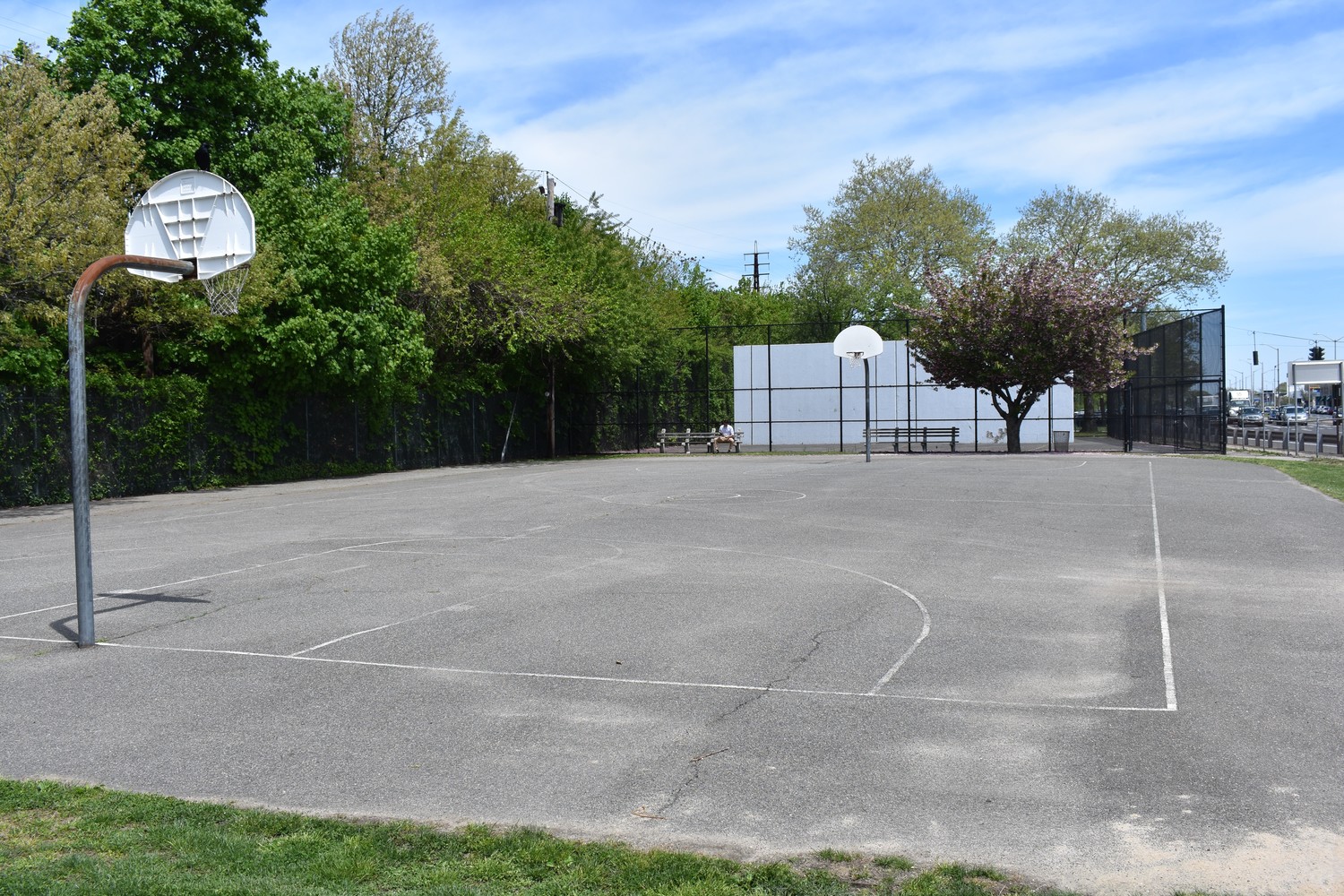 The playground would replace the basketball and handball courts that currently occupy the space.
Ben Strack/Herald 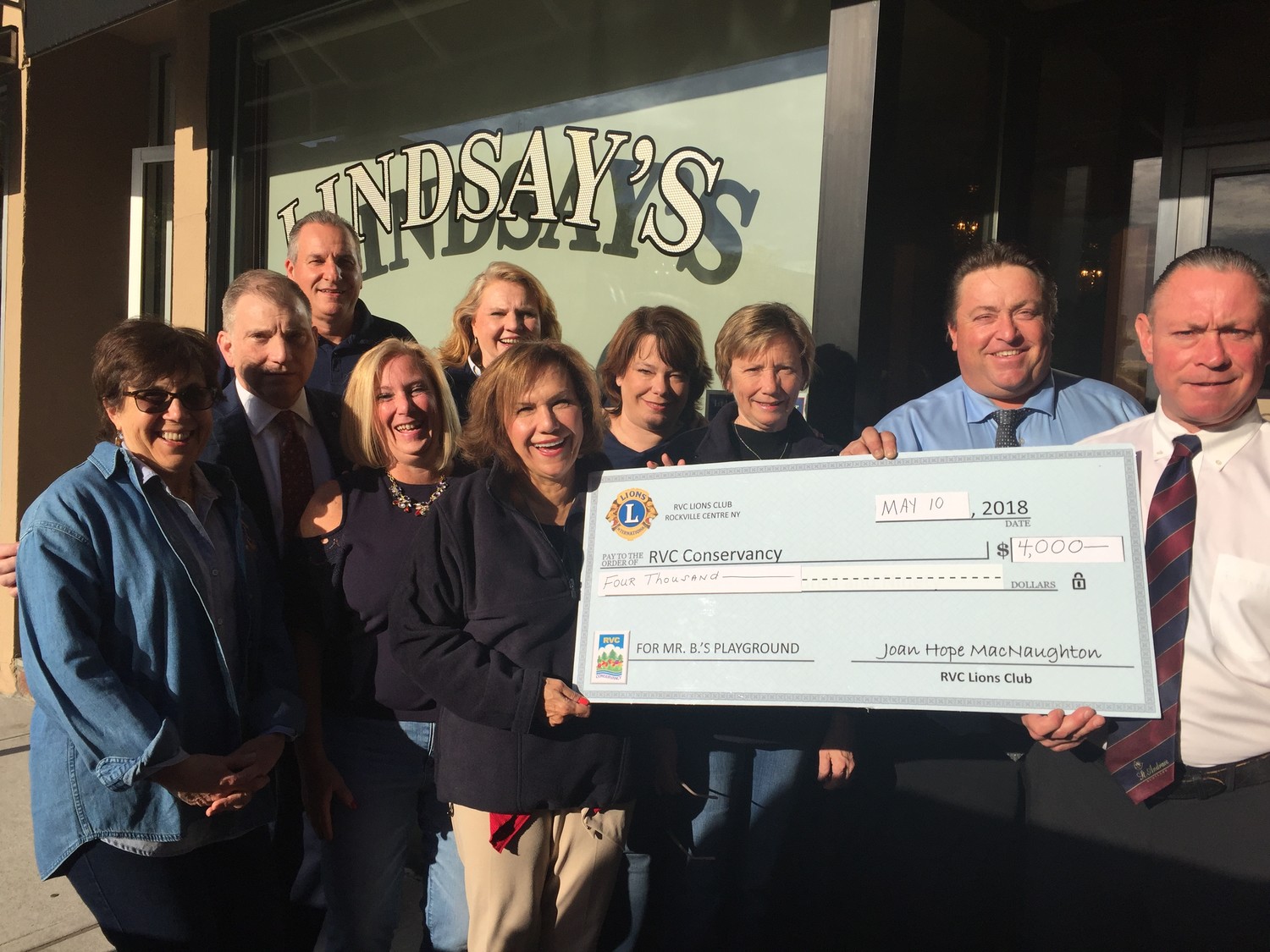 The RVC Conservancy received a check for $4,000 last week from Matt Lindsay, the owner of Lindsay’s, to go toward the playground.
Courtesy Maureen Jordan
Previous Next
By Ben Strack

Community groups are working with the village to speed up the process of building a playground next to Hickey Field that children of all abilities can access and enjoy.

The idea for the inclusive space dates back several years, but despite strong fundraising efforts by local organizations and residents, there is not enough money to break ground.

“It’s extremely frustrating, because we’re working really hard on it,” said Martin Brull, founder of Rockville Centre’s Tommy Brull Foundation, which has donated the proceeds of 11 of its events dating back to early 2015. “Our goal is really high, and it’s hard to reach the goal.”

The space will cost about $1.2 million to build, and will be named after longtime Recreation Superintendent Anthony Brunetta, known as Mr. B, who died in 2016. It is planned to stretch from the northwest corner of Sunrise Highway and North Forest Avenue to the right-field fence of Hickey Field’s smaller baseball diamond, and would replace the basketball and handball courts that are there now.

The area would include a suspension bridge; musical equipment such as bells, drums and step-on chimes; swings; a climbing cargo net; a toddler play area; a seating plaza; restrooms; a storage area; and an amphitheater with a stage and seating, the Herald previously reported.

In total, the village, with help from the Brull Foundation and the Rockville Centre Lions Club, has collected $333,000 to date, according to Maureen Jordan, the Lions Club treasurer. The money is currently sitting unused in an account managed by the RVC Conservancy, a group that works with the village to restore and enhance Rockville Centre’s trees, parks and public spaces.

An unnamed donor gave $250,000 of those funds, and the Tommy Brull Foundation — dedicated to raising money for people with physical, mental and emotional challenges since 2008, when Martin Brull founded the nonprofit in memory of his brother, Tommy, who died in an accident in 1999 — has donated more than $60,000 to the cause.

“It’s a project that I think is really important for the whole community,” Brull said. “It will beautify the area and it will give a place for all children to interact with each other.”

But Jordan said the village is in talks with engineers to split the project into phases in order to break ground faster. The first phase would include a restroom and about $600,000 worth of equipment, she added.

“Rockville Centre is a very generous town, but if people don’t see something, they’re not connected to it,” Jordan said. “We just feel that if we do a phase, it would totally wake up the town.”

She added that she expects to receive about $78,000 in grants from the Lions Clubs International Foundation, which would leave about $200,000 to raise from the community before the effort could reach $600,000 and Phase One could begin. Fliers requesting donations will go out soon to about 11,000 Rockville Centre homes, she said.

“You’d always want something like this to be available for the residents, especially the children that would benefit from the park, sooner rather than later,” said Anthony Paradiso, a board member of the Lions Club, “but the reality is that you need to deal with a lot of bureaucracy.”

The village had expected to receive a $500,000 grant from the New York State Dormitory Authority, which would allow building to start. “I don’t know if it’s anyone’s fault; we just don’t have it yet,” Mayor Francis X. Murray said. “We’re getting there, but we need that half a million and then we’re good to go.”

The grant to be used for the playground was initiated by former State Senate Majority Leader Dean Skelos, who was convicted in federal court of bribery, extortion and conspiracy in December 2015. State Sen. Todd Kaminsky pushed the grant along when he filled Skelos’s vacated Senate seat, a spokeswoman in Kaminsky’s office confirmed.

“I am working hard in Albany to make this long-awaited project a reality,” Kaminsky said in statement. “I hope to have good news before the end of this legislative session so that our differently-abled children can have the playground that they so richly deserve.”

But fundraising efforts are not slowing down while the village waits for the grant. The Tommy Brull Foundation set aside $7,500 for Mr. B’s playground earlier this month from proceeds of its December concert in Long Beach — part of its Shine a Light Series — which featured the Felice Brothers. A portion of the Lions Club’s proceeds from its annual Dinner in the Dark, on May 4, went to the playground, and last week, Matt Lindsay, owner of the local bar Lindsay’s, donated $4,000 to the project.

Brull said he expected to raise another $15,000 for the playground during his foundation’s next concert fundraiser on June 9, also in Long Beach, featuring alternative rock band Deer Tick, which is sold out.

In addition to mailing donation requests, Jordan said that plans are in the works to allow residents to sponsor equipment, as well as personalize bricks on the site to raise additional funds. She also said she wants to put up a sign at the site with updates on how much money has been raised.

“We have to get going, and we have to get some money,” she said, “because it’s been years, and we don’t want it to die.”