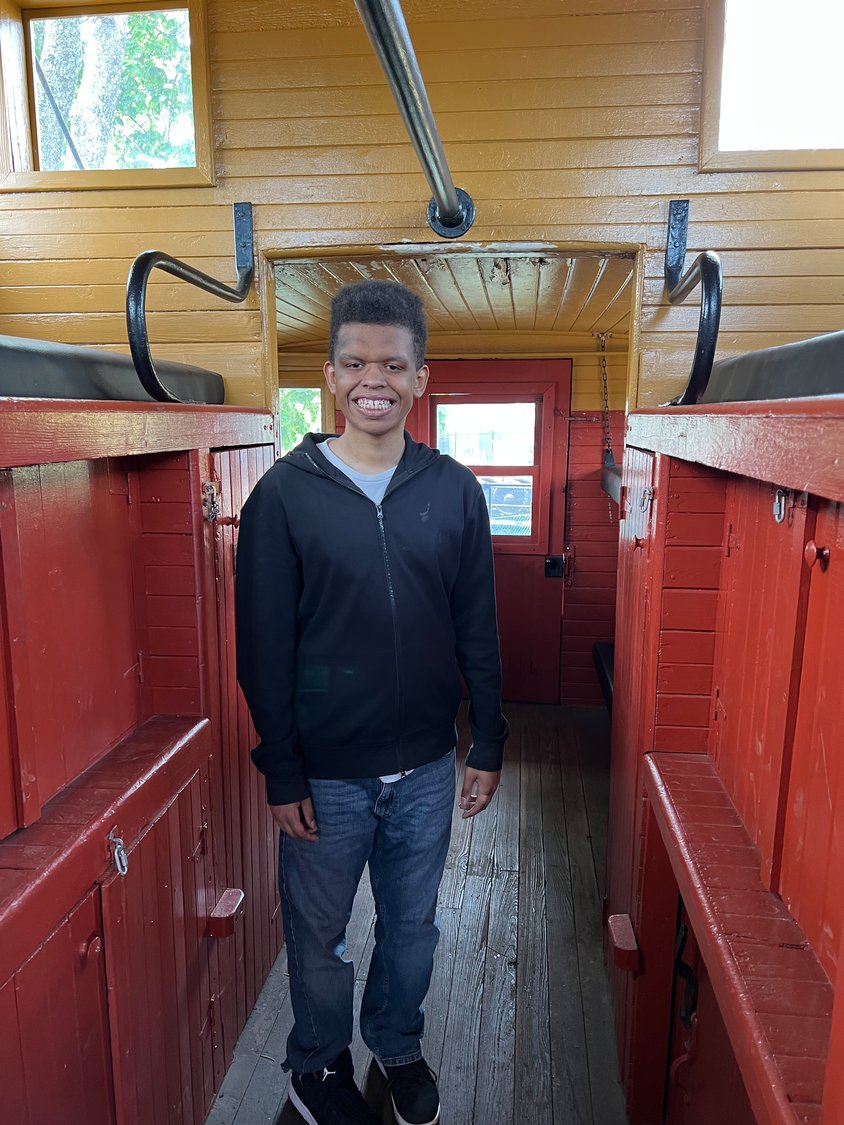 Kevin Santana said he wasn’t really very interested in trains until he attended his first visit to the museum, but after the field trip he thought they were really cool.
Courtesy Oyster Bay Rail Road Museum
By Will Sheeline

The Oyster Bay Rail Road Museum has unveiled a new internship program in partnership with the Center for Developmental Disabilities in Woodbury. Known as the Vocational Internship Program, it has allowed for 19 year old Kevin Santana, a student at the center, the opportunity to work at the museum and help teach others about the history of Oyster Bay.

The center, a social services organization, is committed to helping children and adults with differing abilities achieve their dreams by overcoming barriers in their life, so they can work, learn and enjoy recreational opportunities. Its goal is to educate and train those living with developmental disabilities so they can develop professional skills and begin planning for careers after they leave the center.

The museum staff first met Santana at a center sponsored field trip in August of 2019. Santana and his classmates met with members of the museum who shared what the museum had to offer. Santana was enthralled, amazed by how interesting the museum was, and how nice the operators were.

Bill Burke, chairman of the Rail Road Museum Education Committee, and Angela Parisi, transition coordinator at the center and the field trip’s organizer, began discussing the possibility of creating an internship program. The idea initially was to have two interns. Unfortunately, the coronavirus pandemic put those plans on hold.

Then, last summer, Burke spoke to Parisi about trying again. She is in charge of the center’s career lab, which helps students prepare for the real world. When she spoke to them about Burke’s internship idea she said they were thrilled.

The museum started small, giving students in the center’s vocational program the opportunity to work by organizing and sorting the RRM’s mail. Then, once the students were on solid footing and after further conversations with Burke, she selected Santana to be the first RRM VIP intern.

According to Parisi, who has worked with Santana for four and a half years, there was no doubt in her mind that Santana was the right man for the job.

“I’ve seen how great Kevin is with younger students, because we work with students aged five to 21, and I see how the younger kids’ faces light up and they gravitate towards him,” Parisi said. “His personality just lends itself to working with younger students, and this was a great opportunity to get him more involved in the museum.”

Santana works at the museum in an ad hoc schedule, helping out when field trips from nearby elementary schools or camps arrive. His duties include greeting museumgoers at the bus, distributing pens and pencils to the children, and generally sanitizing the space, as several of the museum’s exhibits are hands on.

Santana said his favorite duty as an intern is helping to turn on the museum’s turntable, which he does under supervision from a museum official at all times. The turntable is an archaic machine that changed train lines during the days of steam locomotion. Nowadays visitors stand on the turntable as it rotates, which it can only do with two people turning it on at the same time, making Santana’s job essential to the museum experience for the children.

Burke said that Santana has been doing a terrific job and has really proven himself to be a dedicated museum employee.

“Kevin’s a really great kid, with just a heart of gold,” Burke explained. “We did some training with him, working out what jobs he was comfortable with, and since then he’s been an amazing addition to the team.”

Burke and Parisi have plans in the works to expand the program even further, potentially adding two more interns in the next year, who Santana will help train and oversee in his position as the lead intern. Thanks to Santana’s perseverance, and the hard work of the RRM and the center, the seeds of a program that will impact the lives of many differently abled children and adults has been planted in Oyster Bay.