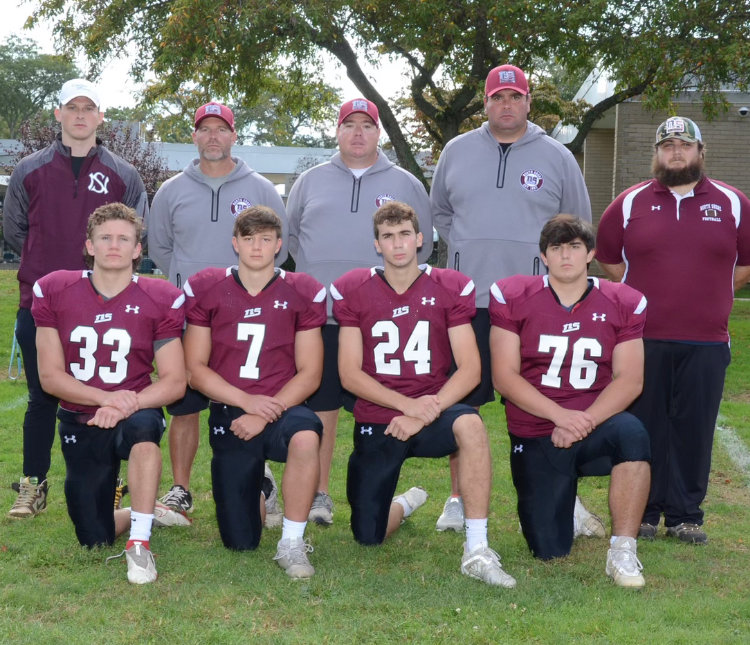 North Shore’s football team finished the regular season with a 6-2 mark and is headed to the playoffs.
Courtesy Dan Agovino
By Marc Fishkin

As the Vikings gear up for another playoff run, Liotta has elevated to starting quarterback, replacing Dan Quigley, who was injured three weeks ago.

Quigley, a senior who guided North Shore to last season’s finals, has returned from the hard hit, but not at quarterback. He’s spotted in at defense and contributing at tailback.

Small in stature at 5-9, 145 pounds, Liotta has showed a big heart in a big spot and retained he job.

After a ragged start, North Shore is peaking at the right time. The Vikings are winners of four straight, including last Saturday’s 26-14 victory over Malverne.

There will be a rematch. As the No. 2 playoff seed, North Shore (6-2) will host seventh-seeded Malverne in the first round this Saturday – the winner heading to Hofstra for The Big 4.

This time, North Shore wants it all. It’s still a bitter taste, losing the title game to Wantagh at home on May 1. The memory of the Wantagh winners dancing on the Vikings’ logo is still a fresh wound.

“We set the bar real high,’’ said North Shore head coach Dan Agovino, in his 20th season guiding the maroon and white. “We came into preseason No.1 seed. We’ve had growing pains along the way. We’ve grown as a team into a family. The kids have bought in and it’s a huge difference. We’re on track.’’

More a rushing quarterback, Liotta has also thrown for two touchdowns in his 2-plus games. Against Malverne, Liotta ran for 72 yards and threw for 58 yards, including a touchdown. “His football IQ for a young man is off the charts,” Agovino said. “He brings a relaxed feeling to the huddle, reads the defenses real well.”

The rushing attack is formidable. With Quigley added to the mix, the Vikings boast a three-headed rotating monster that also includes Nick La Rosa (550 rushing yards, 10 TDs) and Nick Livoti.

They boast a standout senior wide receiver in Dave Berlin, a 6-foot-3 threat whom they plucked from the basketball team last season. And their offensive line is spearheaded by tackle Reece Ramos, an All-County talent.

On defense, Will Feldmann needed to convert from safety to middle linebacker after they lost Mike Granelli to a torn ACL in Week 4. And he’s shined with his toughness. At defensive tackle, Leo Ponce has stepped up - as has St. Anthony’s transfer, 6-3 Danny Sotiryadis, who has filled the bill with fundamental play.

But this is a club built on its up-tempo spread offense and an unlikely spark under center. The game-film wizardry of offensive coordinator Bill Madigan paid off in getting Liotta prepared.

“Not having size on my side, it’s seeing the field and trusting my teammates will do the job,’’ Liotta said. “I was pretty sure I could get it done. I know I had 10 other really good players on the field.