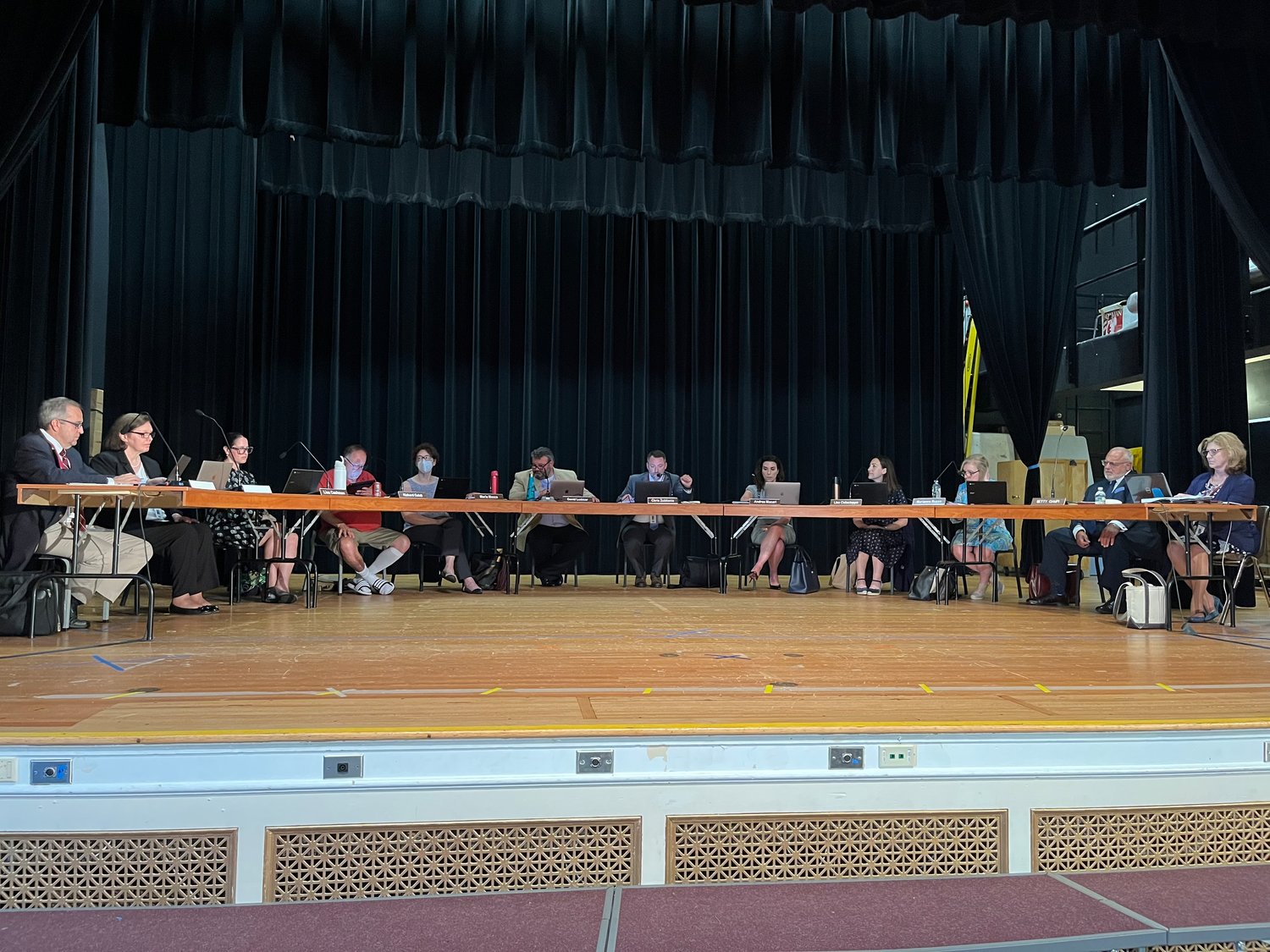 The North Shore Schools District Board of Education announced the LIPA deal at their July 1 reorganization meeting.
Will Sheeline/Herald
By Will Sheeline

After years of legal battles, the North Shore School District has finally reached a settlement with the Long Island Power Authority, with the school withdrawing their third party beneficiary suit against the company in exchange for three payments totaling $3.25 million to be made to the district. Although the funds will not cover the estimated loss of $29 million in annual revenue the district is facing from LIPA’s closure of their Glenwood Landing power plant, it will allow the district and its officials to close this chapter of the school’s history and refocus on providing their students with the best education possible.
The deal was announced at the Board of Education’s annual reorganization meeting held on July 1. The settlement promises the district approximately $2 million to be paid on August 1, with two follow-up payments of roughly $750,000 and $500,000 coming later in the year.
Board President Dave Ludmar explained that while of course the board wishes that they could have gotten more money for the district, he believes that this was the best chance they had to recoup some of the financial loss the district will face over the next five years.
“In every negotiation certainly, every party would like to do better, and I’m sure LIPA feels the same way about us,” Ludmar stated. “But the fact that we no longer have a physical plant certainly reduced our leverage in the matter, and at the end of the day we do as a board feel that this was the best deal that we could get.”
Chris Zublionis, the district’s new superintendent, echoed that statement, asserting that by closing the deal the district can get back to focusing on their students. He claimed that while the deal will not make the district financially whole, it will allow them to build up some savings to help defray rising costs in the future.


“LIPA will be providing us extra funding to create a glide path so we can adjust to any changes in taxation in the future,” Zublionis asserted in an interview after the meeting. “So, you know, going forward, we’re just going to have to continue to look carefully at our budget and be mindful of our spending and costs.”
The deal does come with the caveat that should any new person or group open a new suit against LIPA in the next month that the deal is off, effectively forcing the district back to square one. And if any suits are brought to LIPA after the initial payment has been made to the district, they no longer have to pay the remaining funds, but it will not retroactively take back the first $2 million.
With the payment taken care of, however, the district is getting ready to weather the financial storms ahead. They have already been promised a $1 million dollar grant by outgoing State Senator James Gaughran, and are continuing to work with elected leaders at the local, county and state levels to try and reduce the upcoming economic fallout, which could raise taxes in the district by between $900 and $2,400, based on property value, over the next five years.
“We have been and continue to be working with all of our elected representatives on this issue,” Ludmar said. “We are in constant communication with them and we very much appreciate the assistance we have had. And we know that our elected officials, from all sides of the aisle, are sympathetic to our plight and recognize the sacrifices that this community has made to provide energy to all of Long Island, and we look forward to continuing to work with them.”
With the new school year roughly a month and a half away, the district has begun its preparations under its new superintendent. Zublionis explained that he and the new assistant superintendent for business James Pappas are working to determine the district’s new tax levy, which will be announced on Aug. 15.
He also plans to try and make as much headway as possible in developing the curriculum and follow up on the district’s goals to increase and improve student engagement. He and the new assistant superintendent for curriculum and instruction, Carol Ann Smyth, will be reviewing surveys and conversations with students, as well as feedback from teachers and the learning committee, about the best ways to continue to improve the experience of the district’s young scholars.
Despite the financial storms ahead, newest Board of Education trustee Lisa Cashman is confident of Zublionis’ ability to lead the district forward during these trying times.
“I’ve known Dr. Z since he was still Mr. Z and he was principal of Sea Cliff Elementary School, and he has always done a fantastic job,” Cashman said.
Report an inappropriate comment

From Uniondale to Carnegie Hall

Looking into the future at Hewlett-Woodmere School District

This robotics team at Hewlett stood out at the competition