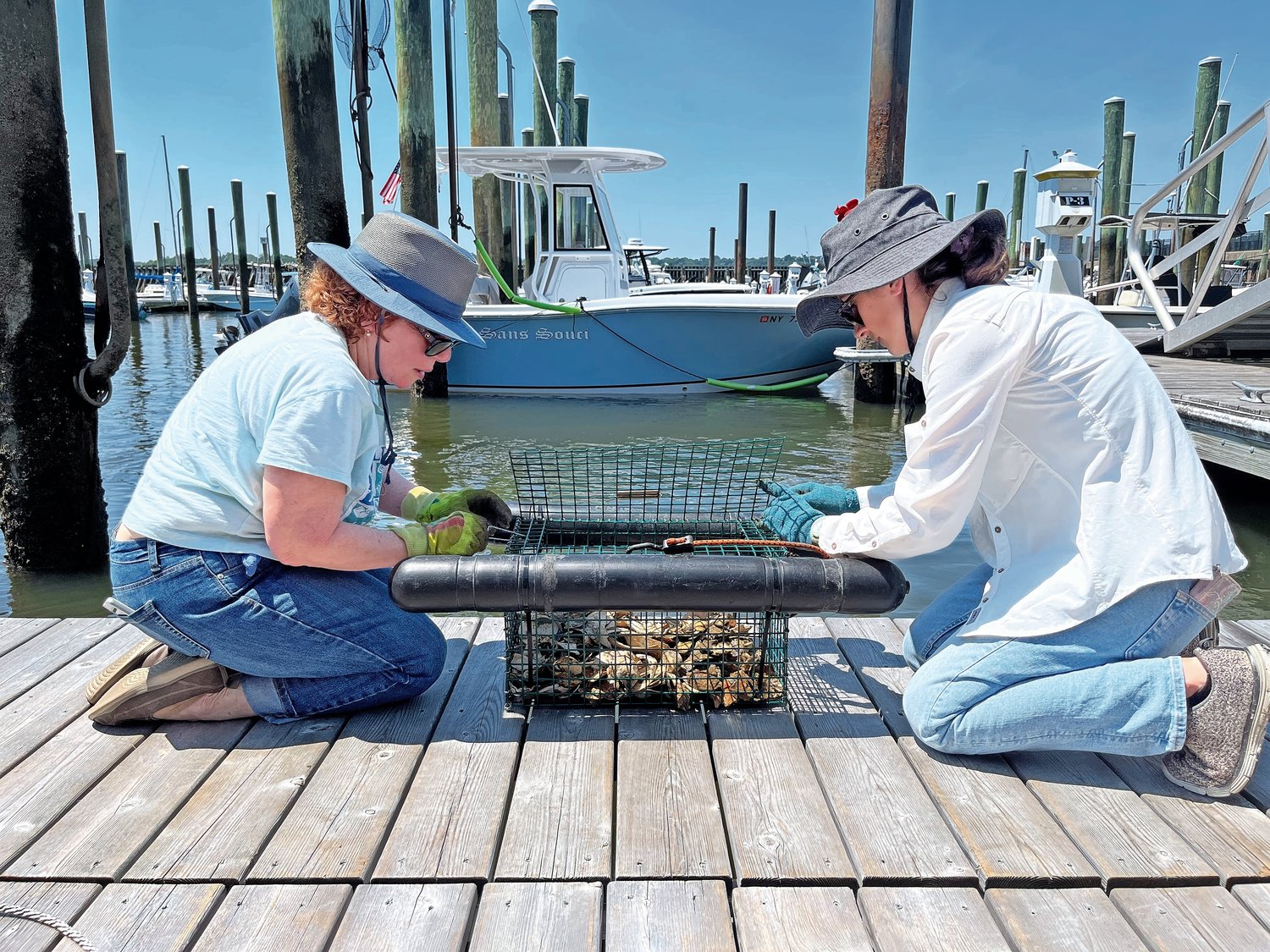 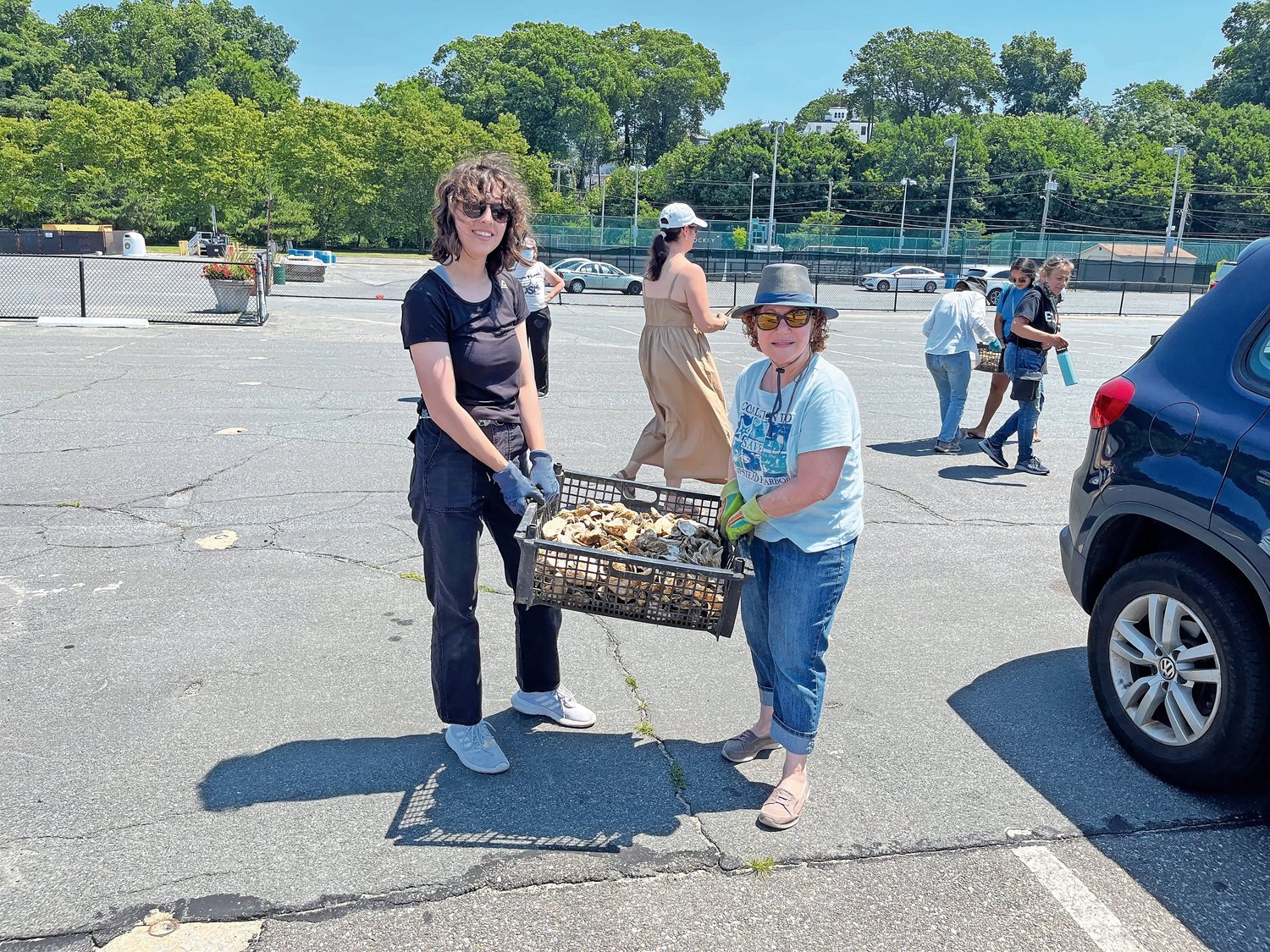 Martha Braun, left, and Carol DiPaolo carried the fresh oysters to the docks at Tappen Marina.
Will Sheeline/Herald
Previous Next
By Will Sheeline

The Coalition to Save Hempstead Harbor has embarked on a new project to help keep local waters healthy. On Tuesday the organization kicked off an oyster-seeding project, beginning the process of planting roughly 30,000 oysters in several local harbors.
The concept is straightforward: The coalition has placed spat, or oyster larvae already attached to shells, in eco-friendly cages in the waters off three docks; the Tappen Marina, the Hempstead Harbor Club and the Sea Cliff Yacht Club.
The benefits of having oysters in the water are manifold, according to Joshua Perry, the shellfish hatchery manager at Cornell Cooperative Extension of Suffolk County’s marine program, who delivered the oysters from Southold.
Oysters not only improve water quality by diluting chemicals such as nitrogen, but also promote marine biodiversity as they develop by creating a habitat in which other local species can grow as well.
“Oysters, in a sense, are the powerhouse of filters on Long Island,” Perry explained. “One oyster, when fully grown, can filter up to 55 gallons of water a day.”


The coalition will be growing a species known as the eastern oyster, common to the east coasts of North and South America. It is a marine bivalve mollusk with a lifespan of up to 20 years, and grow between 3 and 5 inches long.
This project has been several months in the making, beginning in March, after community members approached the group to ask whether the coalition could duplicate an oyster-seeding effort that the Town of Oyster Bay began in 2017. Carol DiPaolo, the coalition’s water-monitoring coordinator, explained that its project has been driven by the community from the beginning.
“The impetus was, there was a lot of interest in a program like this anyway,” DiPaolo said, “and some of the local residents were going to Oyster Bay, where the program had already been established. It really started because local residents were telling us that they’d love to see a project like that here.”
The oyster spat will be cared for through a community oyster gardening program overseen by coalition members. They invite residents to participate in the restoration of local waters by educating them about its ecological impact and taking a hands-on approach. Volunteers will check the oysters throughout the summer and fall, measuring their growth with a random sampling of 20 oysters at a time, and cleaning their cages twice a month.
Although the project is already underway, the coalition is still working on securing funding from the community. Donations can be made on the organization’s website, coalitiontosavehempsteadharbor.org.
While the project will certainly benefit the environment, Martha Braun, the coalition’s assistant environmental monitor and the initiative’s program manager, explained that it will not remedy every issue that Hempstead Harbor faces.
“We’re not relying on the oysters as a solution to all of our problems, because we can’t just rely on them to take in all of our toxins and then be like, ‘Oh, it’s fine now,’” Braun said. “It’s a motivation to find other ways to contribute to improving water quality so they can actually thrive once we put them in the water.”
DiPaolo also explained that while the major goal of the project is to grow the oysters into a productive force for improving aquaculture and water quality, the coalition is also focused on educating the community on the benefits of this productive shellfish.
“It’s really a wonderful educational program for the community to see how the oysters are set on old shells, what they look like, what the growth rate is,” she said, “and learn about all of the biology of oysters and learn about the unbelievable power they have at filtering, and all of the benefits they provide.”
Report an inappropriate comment