Chabad Center for Jewish Life is blessed, and educated 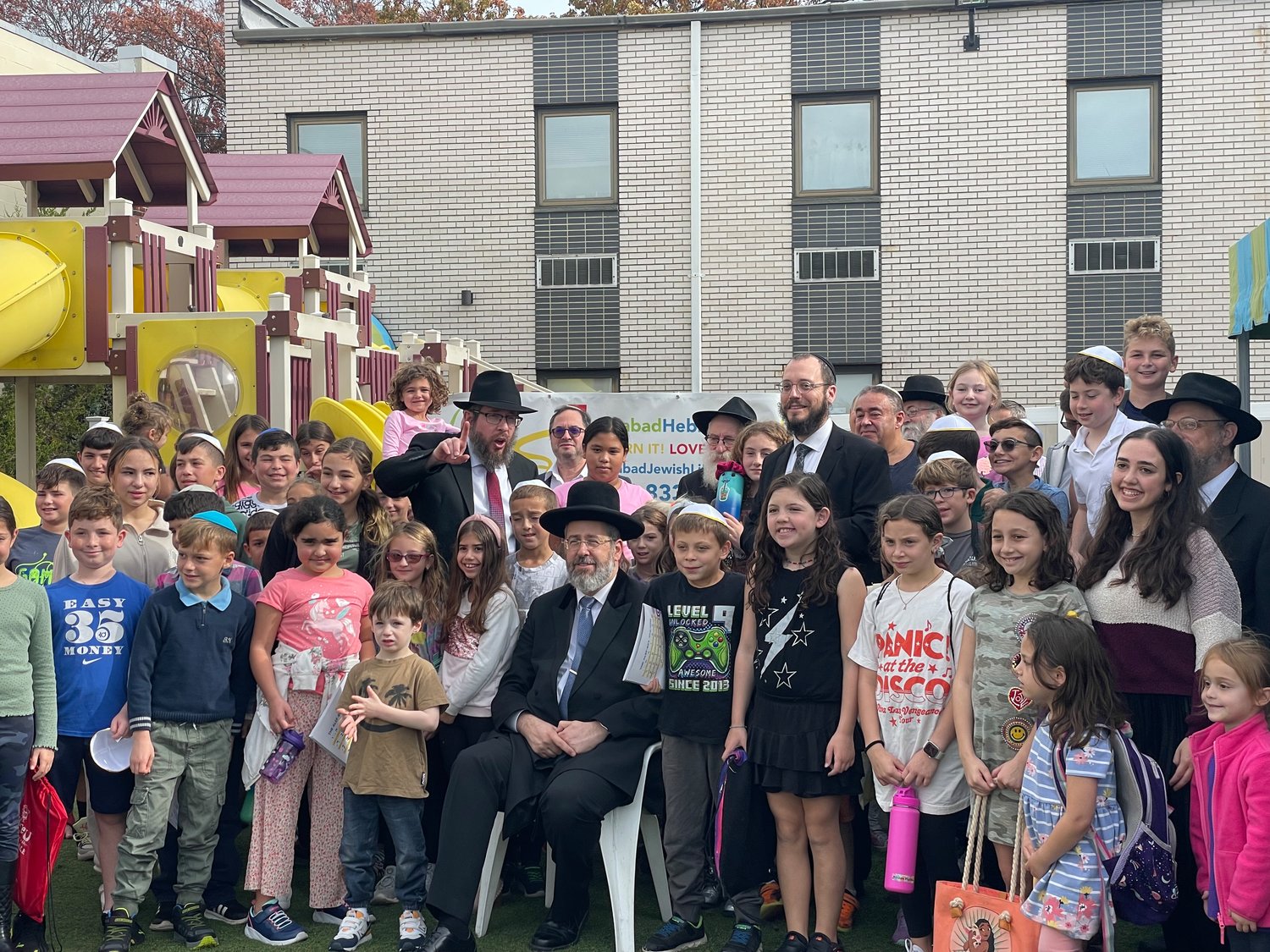 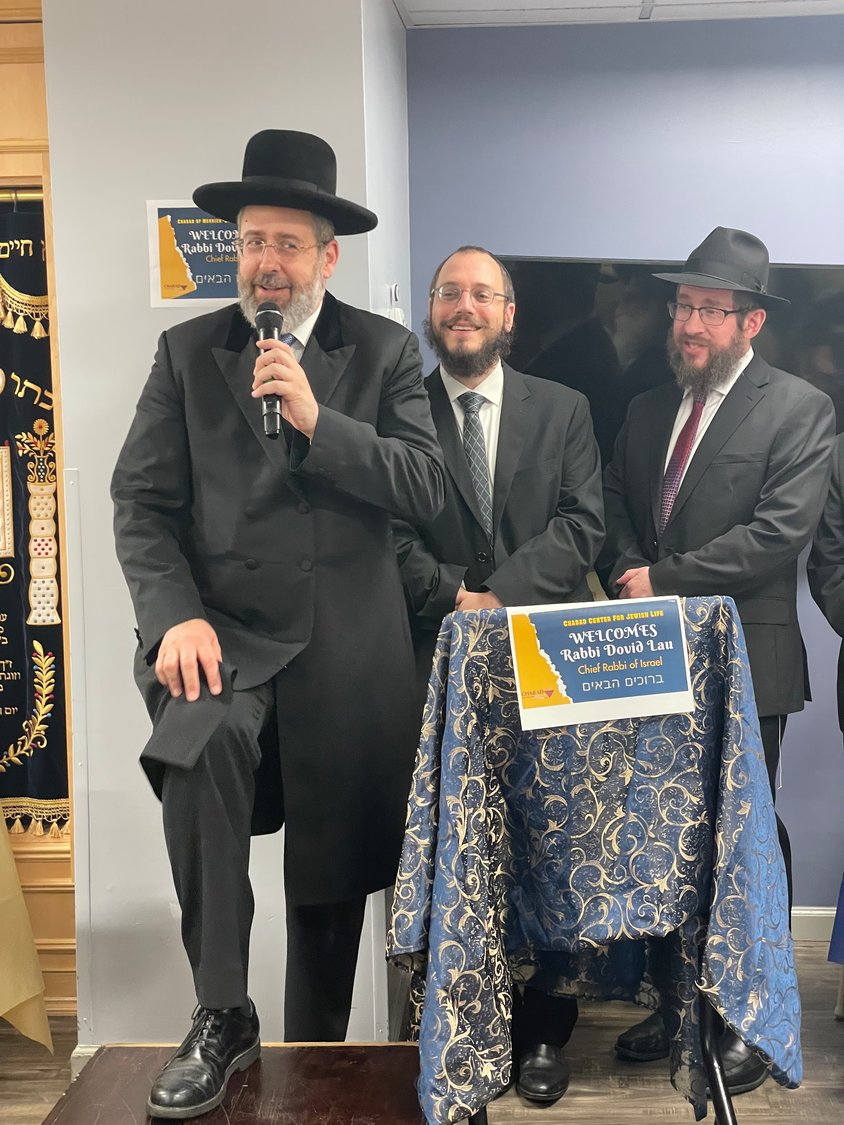 Following a busy morning at the Chabad Center for Jewish Life last Sunday, Lau, the chief rabbi of Israel, met its members and offered some wisdom on issues facing the greater Jewish community.
Jordan Vallone/Herald
Previous Next
By Jordan Vallone

Members of the Jewish community in Merrick, Bellmore and Wantagh were invited to the Chabad Center for Jewish Life last weekend for a number of things — a Men’s Tefillin Club meeting, a special mezuzah check and, perhaps most important, a visit from the chief rabbi of Israel, David Lau.

The Tefillin Club meets on the first Sunday of every month at the center’s Hewlett Avenue location in Merrick. Tefillin are a pair of leather boxes containing scrolls of parchment with verses from the Torah. Hand tefillin are fastened to the wearer’s weaker arm — the left arm for righties, the right arm for lefties. The box from this strap rests on the bicep, facing the wearer’s heart.

Head tefillin are worn like a crown, with the box resting just above the hairline. In Orthodox Judaism, tefillin are worn only by men, and it is considered a very powerful and important mitzvah to fulfill. A blessing is recited to the wearer by a rabbi, and certain prayers and texts are read aloud while wearing tefillin.

At the meeting, Rabbi Shimon Kramer, who leads the Merrick-Bellmore-Wantagh Chabad, led the morning prayer. Afterward he introduced Rabbi Nota Kuperman of Brooklyn, a sofer — or traditional Jewish scribe — who had come to examine the verses on the tefillin scrolls to ensure that the script was unsmudged and still legible.

“Tefillin (is the) channel in which we receive God’s blessing,” Kuperman said. “Tefillin is what binds us to God — our connection. It reminds us that God not only created the world, but that he continues running the world.”

Kuperman remained at the Chabad for the day to check the writing in a mezuzah, a decorative case that contains another piece of parchment known as a klaf. A mezuzah is attached to the doorway of a Jewish home, and Chabad members were encouraged to bring theirs to be inspected by Kuperman.

Like tefillin, the text on the klaf should also be checked regularly by a sofer to make sure it is still kosher, Kuperman explained. A mezuzah is hung to show that the dwelling is a Jewish household that keeps to a special set of rules, rituals and beliefs.

“With the mezuzah, we dedicate to God everything that is in our house,” Kuperman said. “This brings out God’s blessing — the blessing of everything in life that we have.”

He said he was impressed by the number of attendees, and explained why and how often tefillin and mezuzahs should be checked. “They wear out,” he said. “The letters, even if they were written properly, with time, can deteriorate, the parchment can deteriorate and the letters can crack and fade. Therefore it has to be inspected once every few years.”

Some in the crowd asked about the proper method of storage for tefillin and a mezuzah, and whether that could affect on the longevity of the text. Kuperman said he had seen scrolls stored in the tightest waterproof containers deteriorate, which is why he urged the attendees to make sure theirs are checked often.

The Chabad of Hewlett and the Chabad of Long Island had helped arrange a visit by Rabbi Lau on Sunday. Kramer said that congregants were thankful that Lau was able to take some time out of his day to meet them, and to offer some thoughts about issues facing Jews around the world.

Lau, like Kuperman, said he was impressed by the size of the audience, and commended people for bringing their children to Hebrew School, which also meets on Sunday mornings at the Chabad Center. After greeting the gathering, Lau made time to meet with the Chabad’s students, and answer their questions.

Some Chabad members asked Lau what they could do to help Israel, and how they could battle the surge of antisemitism at home and in the media. He urged them to continue educating students and their children, and to take them to Israel to experience the culture and holiness of the country.

On the matter of antisemitism, Lau shared some wisdom he had recently imparted to religious leaders from around the world — including Pope Francis and prominent figures in Islam — at a meeting he attended in Kazakhstan.

“We are very quick to speak on each other,” he said, “that we forget to speak with each other.  You can speak with people that don’t understand  —  and this is a way to help us.”