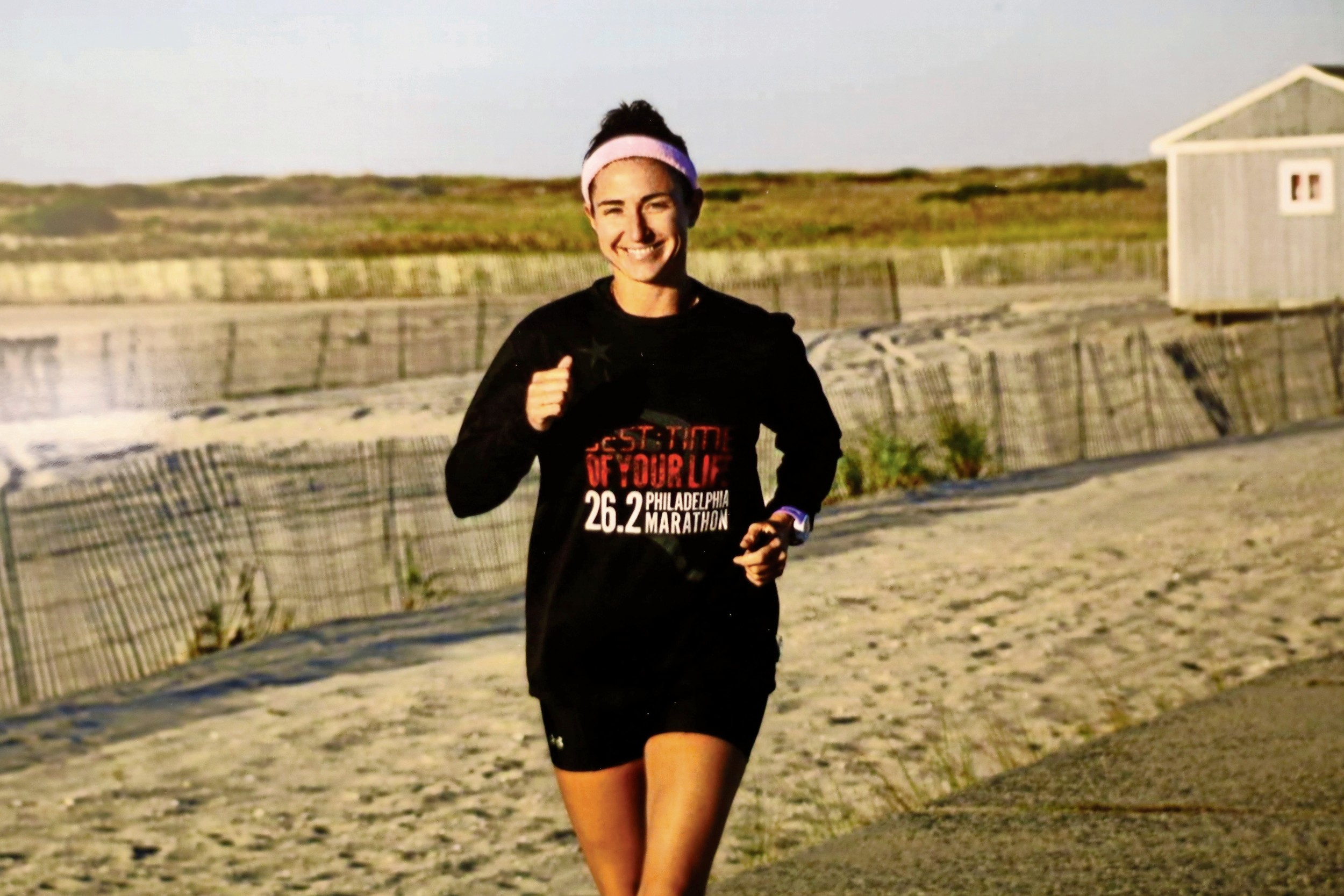 I wasn’t even sure if my time was good or not. I just wanted to be able to get through it.”
Kelly Perno-Grosser Seaford resident
By Rebecca Anderson

Kelly Perno-Grosser, a 36-year-old Seaford resident, does a lot of running around: taking her two daughters — Bridget, 7, and Charlotte, 4 — to and from school, going to work and shopping. But in her precious free time, she said she  actually runs — just for herself.

Perno-Grosser clocks between five and 10 miles a day, and competes in more than 12 marathons and relays each year. Although she was once a novice who “didn’t know anything about track,” Perno-Grosser said, training and racing competitively feel natural now.

She began her running career after she made the women’s basketball team at Molloy College. “My coach told me I was too slow and that I needed to start getting into shape,” she recalled. “So, I started running with a friend.”

Perno-Grosser, a Levittown native, graduated and became a math teacher at Plainedge High School. She continued to run out of habit.

“It’s like an addiction,” she explained. “Once I start, I can’t stop.”

She said she tried her first full marathon 12 years ago after doing some research and finding Run Start, a 10-week training program offered by the Greater Long Island Running Club. According to its website, GLIRC is Long Island’s largest and most active running club, with a membership that spans Nassau,  Suffolk and beyond.

The then 24-year-old runner finished the RXR Long Island Marathon in three hours and 47 minutes. To this day, she said, it remains one of her greatest accomplishments.

“I wasn’t even sure if my time was good or not,” she said. “I just wanted to be able to get through it.”

For Perno-Grosser, running the marathon was like taking a first bite of cake — she was hooked. Last year, she won the 10K race held during Long Island Marathon weekend.

Perno-Grosser decided to join the Bellmore Striders, an elite recreational running club with members who compete in Long Island races. For eight years, she ran local relays and half marathons, including Seaford’s Hot Chocolate Run and the Bethpage Ocean to Sound Relay at Jones Beach State Park.

Mike Polansky, GLIRC’s president, noted that she recently took home a first-place prize after dashing across the finish line at the Jonas Chiropractic Sports Injury Care Aspire 10K on April 1.  “Kelly is a veteran of the local racing wars,” he said.

Now Perno-Grosser competes for Runner’s Edge, a Farmingdale-based organization and running shoe store that sponsors women’s and men’s racing teams. Although she said her time with the Bellmore Striders molded her running technique, having two children made it too difficult to be on a team. Runner’s Edge gives her flexibility to compete on her own and exercise at home, she explained.

“My husband, Chris, laughs at me because we put an extension on our house and we built it all around my running room,” she said.

Perno-Grosser said that Bridget and Charlotte love to watch her compete. She hopes that they will one day follow — or rather, run — in her footsteps.