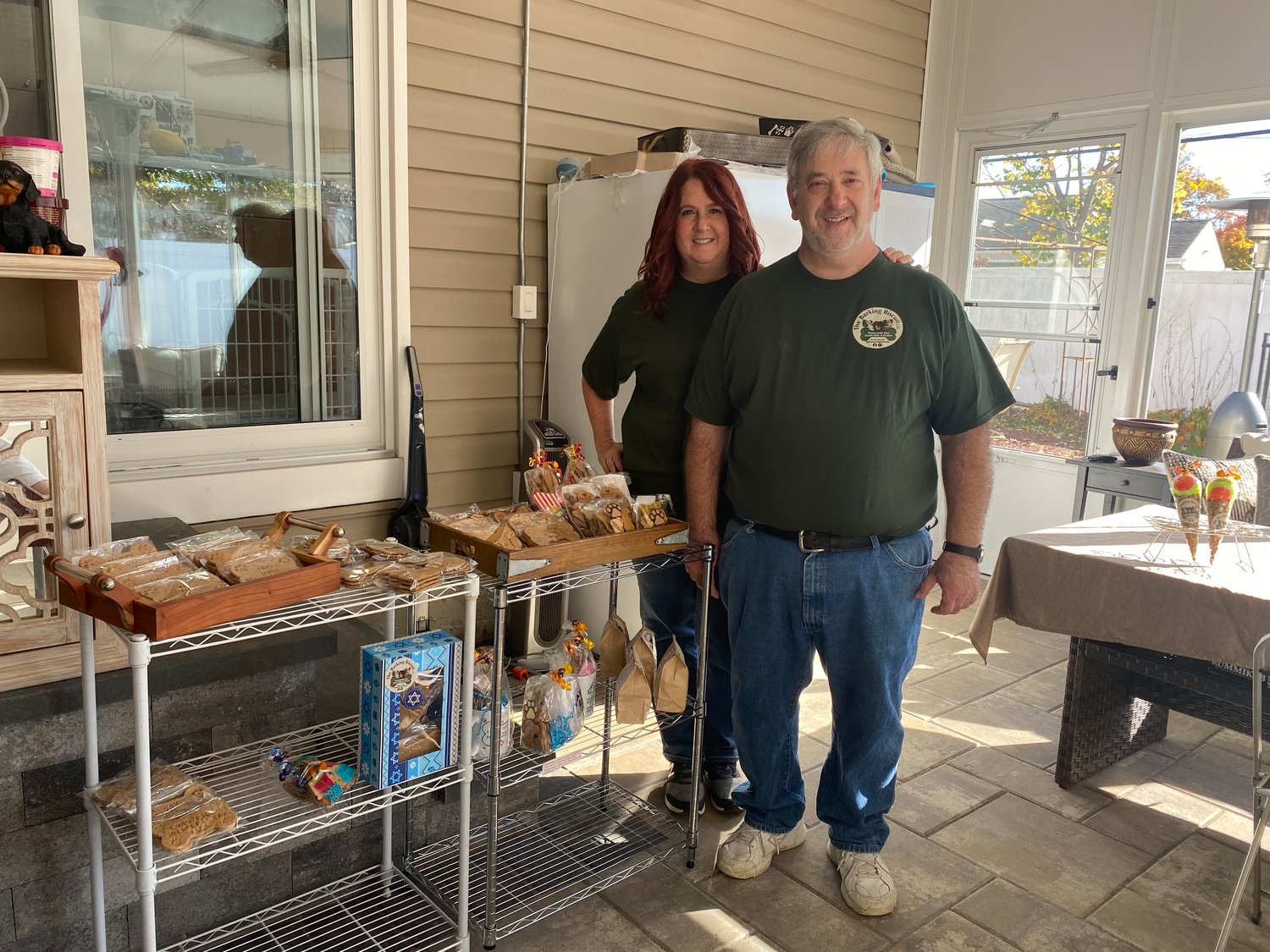 Ira and Hillary Reiter of Wantagh created the Barking Biscuit, which speciallzes in treats for pets.
Michael Malaszczyk/Herald 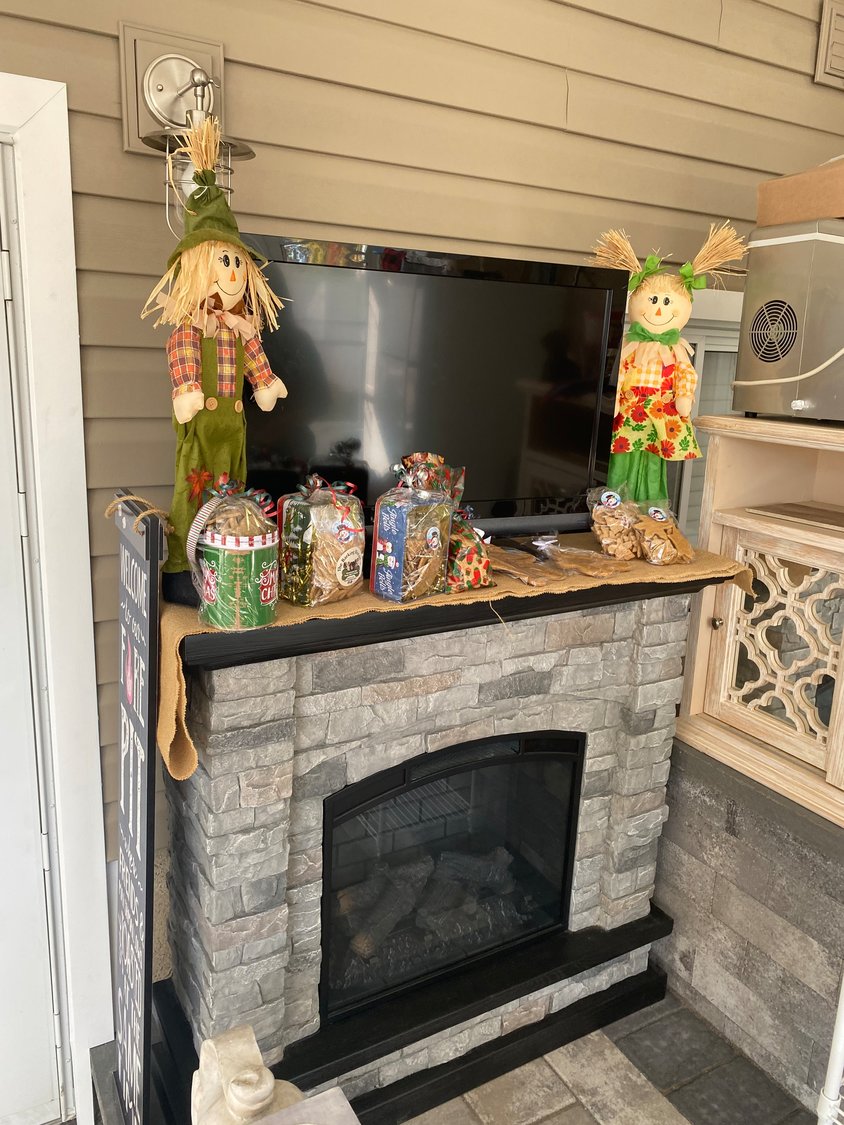 What began as a passion project by a Wantagh couple now has the potential to take the pet food industry by storm.

The couple recently launched a business called the Barking Biscuit, which makes homemade treats for dogs.

Ira Reiter and wife Hillary say they always loved dogs, and both of them grew up with dogs in their home.

Together, the Reiters now have three dogs — Gracie, Riley and Oscar, all of whom are rescues.

“I grew up with great Danes,” Ira Reiter, originally from Elmont, said. “Growing up, I probably had eight or nine great dogs. And then Hillary and I got married, and we went from big dogs to small dogs.”

According to the Reiters, their daughter, Jaymee, was always an animal enthusiast growing up as well, and they saw every kind of animal in their household, from mice and guinea pigs to hedgehogs, fish and hermit crabs. Jaymee never forget her passion for animals and now works as a zookeeper.

Ira Reiter was originally a commercial truck salesman, a job he left to fully dedicate his time to The Barking Biscuit, while his wife still works as a hairdresser when she’s not making pet cookies.

The Barking Biscuit began as a hobby for the Reiters.

“I was baking cookies for my dogs, and I was giving them all away,” Hillary Reiter said. “The dogs were going crazy for them. So we figured why not take it to the next level and start selling these cookies?”

The business officially began in 2019, and the Reiters donated a percentage of their sales every month to different animal rescues, including Last Hope in Wantagh and the Town of Hempstead Animal Shelter, also located in Wantagh. They have also donated cookies to pet pantries, such as Baxter’s Pet Pantry in Elmont.

The Barking Biscuit can also be seen at street fairs, farmers’ markets and even breweries — the company had its kiosk open at Blue Point Brewery in Patchogue on Nov. 6. They have even baked for the Nassau County K-9 dogs, the Reiters said.

Many businesses suffered when the pandemic hit in 2020, but The Barking Biscuit’s unique model actually allowed it to flourish during this time.

“We never rested during that stay-at-home period,” Hillary Reiter said. “We made cookies for essential workers’ pets. We gave them to overnight workers, nursing home workers and, of course, nurses and doctors.”

She added that during this time, they also put together bags for these essential workers that included snacks, water bottles and shampoo. They donated up to 800 of these bags, which included dog-friendly cookie dough, to Mount Sinai South Nassau.

The “pandemic puppies” phenomenon also helped the business, as many people across the country adopted dogs to have a little extra company during the heat of COVID-19.

“We’re licensed with the New York Department of Agriculture,” Ira Reiter said. “So everything that we sell is licensed by them. They do calorie counts and they track our ingredients.”

While the Reiters didn’t want to give away any secret recipes, they said that baking cookies for dogs is the same as baking for humans, minus certain ingredients like sugar and chocolate.

The Barking Biscuit has expanded past the usual clientele of dog owners wanting to treat their pets. Their cookies can be found at places like Point Lookout Deli, and Bubbles-N-Bones in Massapequa. The Reiters also help with charity events, including the Long Island Hospitality Ball.

The Reiters said they want to take their product to the national stage.

“We want to go into more stores and have a factory that’s gonna bake for us,” Ira Reiter said.

“We want to have our cookies produced on a bigger scale.”

But they said they also want to keep the mom-and-pop shop business going at the local level.

“I also want to keep it personal and still bake at home,” Hillary Reiter said. “We have a lot of repeat customers just around here, some even follow us to our bigger events.”

The Reiters are members of both the Wantagh and Merrick chambers of commerce, and The Barking Biscuit’s truck can be found at most events sponsored by either group.