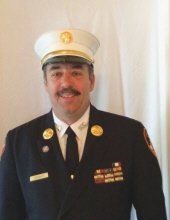 Stephen J. Geraghty, 62, a retired FDNY Battalion Chief and Rockville Centre native, died on Wednesday, Sept. 21, after a long-fought battle with a World Trade Center-related illness. He is the fourth member of the FDNY to lose his life this week due to the devastating impact of the 9/11 terror attacks.

Geraghty served as one of New York's bravest for more than 40 years before he retired from the department in 2021. He was also a volunteer firefighter with the Rockville Centre Fire Department, where he served as an ex-captain of the Eureka Hook, Ladder, and Bucket Company No. 1.

His brother, Eddie, chief of the FDNY's 9th Battalion, was working in Lower Manhattan on that fateful morning 21 years ago, when two commercial airliners unexpectedly crashed into the World Trade Center towers. The 45-year-old, third-generation firefighter was one of the many first responders who died on Sept. 11, 2001. His body was never recovered from the rubble left at Ground Zero.

Stephen rushed into the city shortly thereafter to search for his brother.  He later learned from recordings of FDNY radio communications that Eddie perished when the south tower collapsed. After that day, he devoted much of his time to training future generations of firefighters in preparation for "that day when things go bad."

“We take all precautions and are prepared for any imagined scenario," Geraghty told the Herald in a past interview. "But although we’re vigilant about what could happen, we’re not afraid to live our lives.”

Geraghty is survived by his wife Cathy, his sons and daughter, Christopher, Scott, and Lauren, siblings Timothy, Lynn, Janet, Maureen, Colleen, and other extended family members and friends.

This story will be expanded for the Sept. 29 edition of the Herald.